The Fallout 4 Character Who Broke My Heart

I have a thing for broken boys. You know the type. At first they seem strong, even mean, but much like one of those gross chocolates with cream centres, they have a soft heart once you lick your way inside.

Luckily for me, just about every game with romance options has at least one of these types. In Dragon Age: Inquisition, it was Iron Bull, who hid his fear behind jokes and intimidating amounts of man-beef. In Fire Emblem Awakening, I ended up marrying the taciturn, woman-hating Lon’qu, almost entirely because he was the quietest of the bunch, and therefore the most interesting. In Persona 4, I didn’t end up dating anyone, because when everyone’s broken it just ends up cancelling out.

But it was in Fallout 4 that I met the boy who broke me. At the beginning of the game, I wandered the wasteland, technically single because my cryogenically frozen husband had been shot in the head. I made sure to loot his corpse, though, because I’m not an idiot, so I had the wedding ring that I presumably pried off his cold, dead fingers. 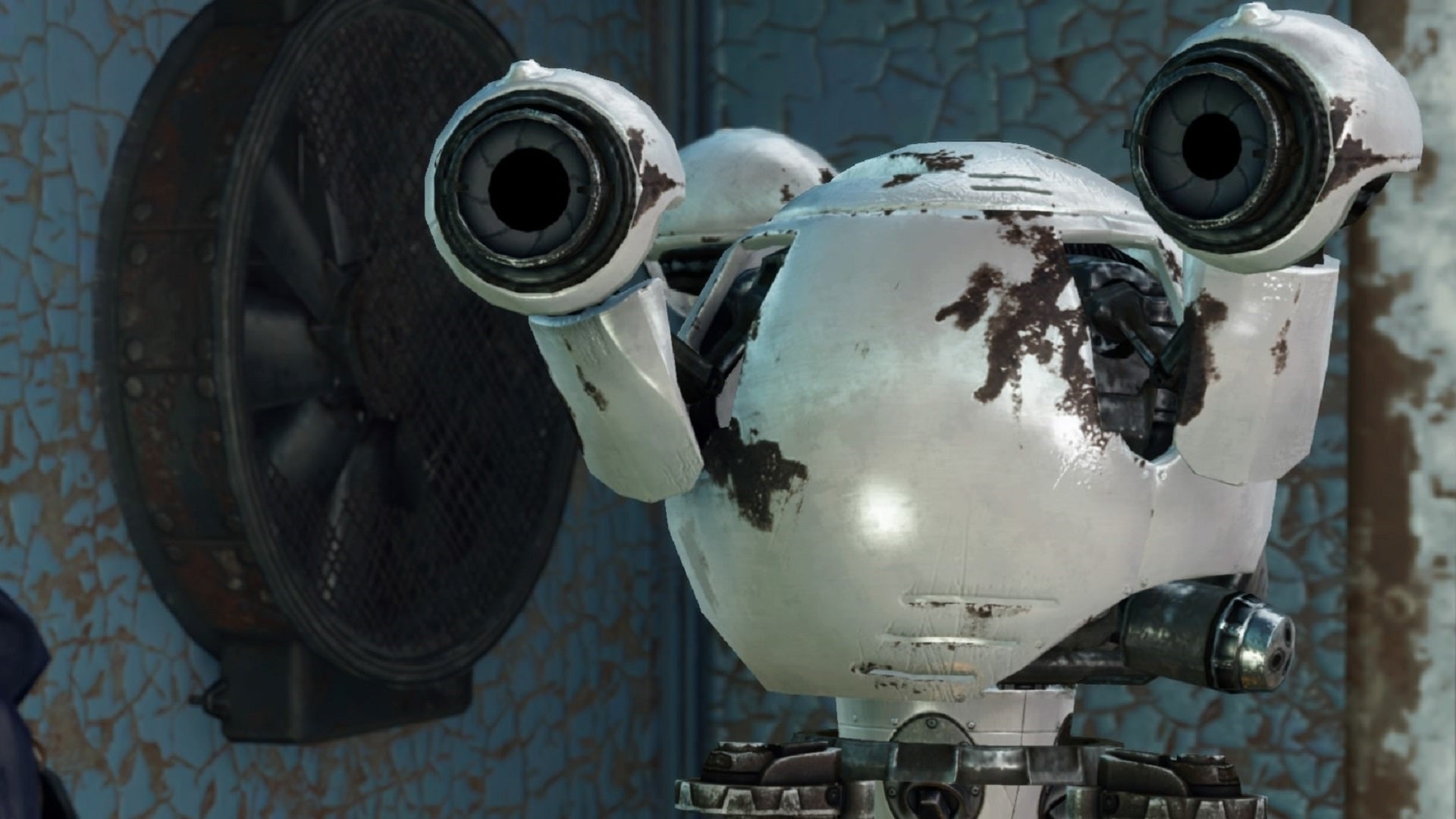 I wasn’t too impressed with Fallout 4‘s romantic offerings at first: a slick-talking reporter with a stupid hat, a bunch of boring war-torn guys, and a spherical robot scientist. I will admit, just because I wasn’t impressed didn’t mean I didn’t take most of them to bed.

It’s the post-apocalypse, after all, and casual sex and potential STDs are the least of our problems in an irradiated country filled with cockroaches the size of desks.

But they were all so judgemental. Piper, the reporter, hated drugs, murder, and violence. Curie, the floating sphere-woman-bot, was constantly pressing me to do sciencey things, and looked down on stealing and threats (technically, she looked down on most things, because of the floating). Preston, one of the first companions you can get, disliked cannibalism. I mean, come on, guys! This is a Fallout game! You can’t just expect me to go around bombed-out Boston being nice to and/or not eating everyone! 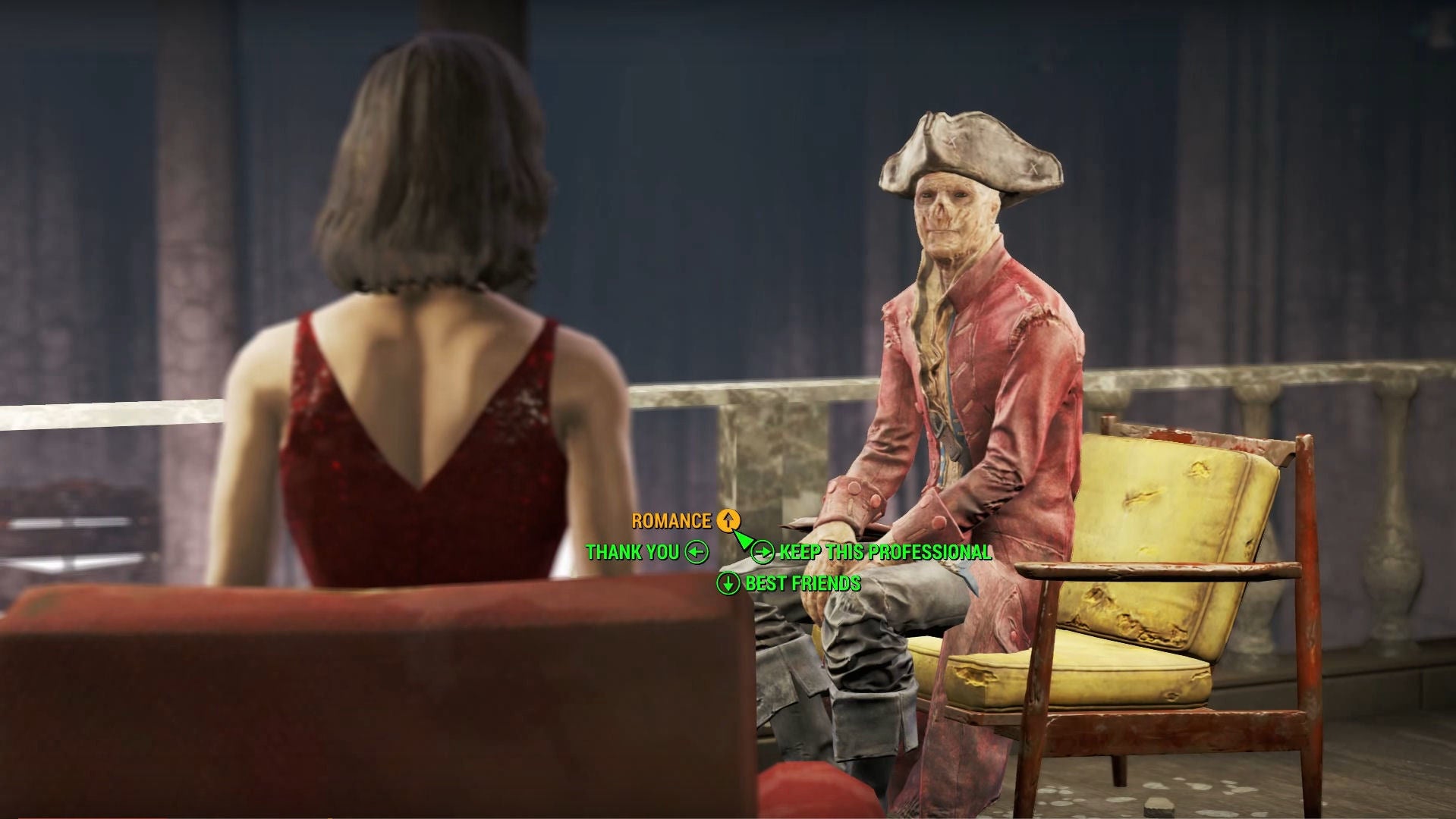 Then I met John Hancock. Talk about broken boys—Hancock’s face looked like the result of putting Peeps in the microwave. At first glance, I was a little creeped out by his lack of nose, lips, and skin, but it wasn’t long before I wanted to find out if he still had a tongue, if you know what I mean.

It wasn’t just his sarcasm and his love of stealing, as evidenced by the fact he’s wearing actual historical items thieved from the shell of the Old State House—it was his heart. The guy threw out a corrupt mayor! He gives speeches! He wears a hat! He’s basically a post-nuclear George Washington, but with less nose and more teeth! 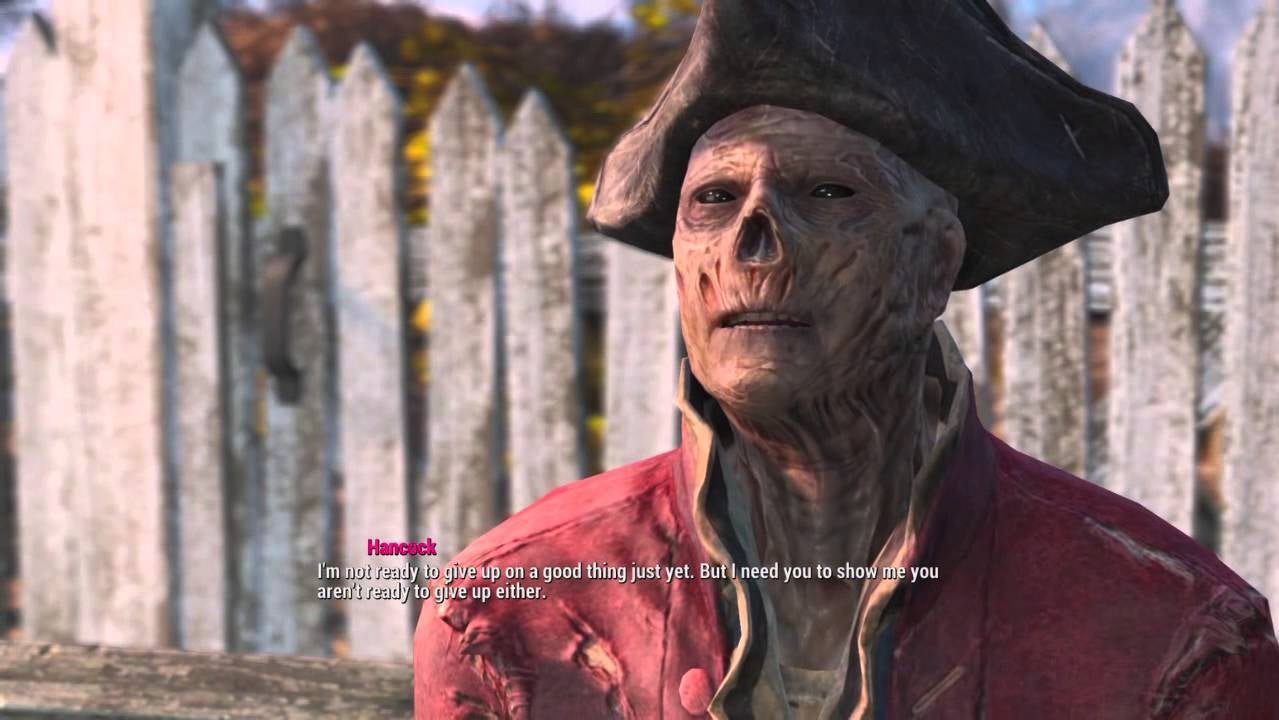 I quickly ditched my other companions in favour of this hunky piece of melted man-jerky. I even reverse-pickpocketed my dead husband’s wedding ring into Hancock’s pocket, a sign of true romance. He didn’t care that I guzzled drugs like candy—sometimes he even gave me some of his own. He was even incredibly appreciative of whenever I did anything in the nude, for reasons I’m still not sure of. He’s the perfect man.

This story does not have a happy ending, though. As much as I hate to jump on the “Bugthesda” bandwagon, my romance with Hancock was brought to an abrupt end by what I can only assume was some error in the code. 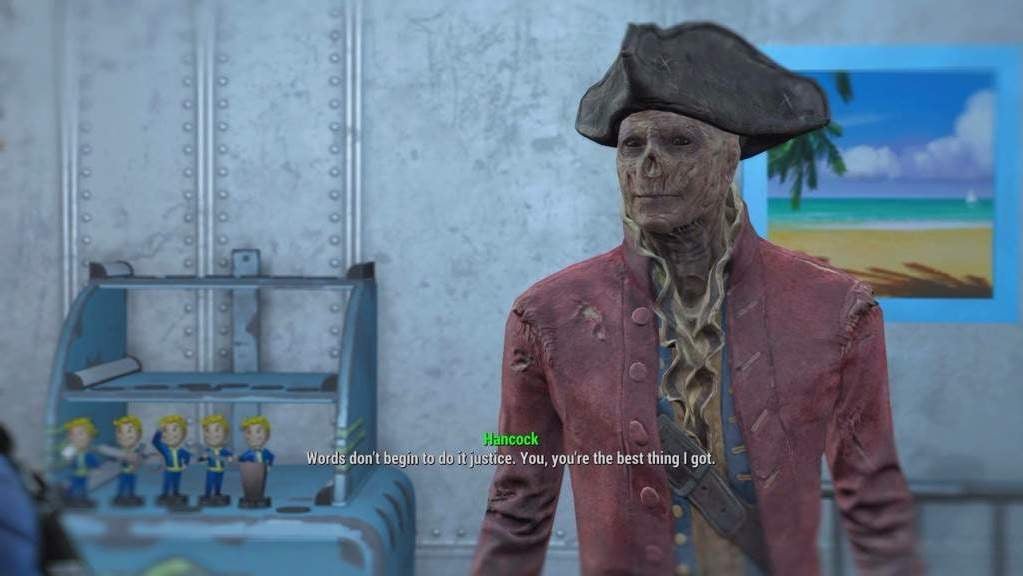 But here’s the thing: I’ll never know what truly happened.

I dismissed Hancock, you see. I sent him off into the wasteland, alone, for reasons I can’t remember. I don’t know if he walked home, or if he died along the way, or if he just fast-travelled into the void, but I never found him again. I searched in every settlement, every bar, every drug-riddled alleyway across the map, with no luck. Wherever he is, he has my wedding ring, and the broken pieces of my heart.