conspiracy theoriesfan theoriesio9pikachupokemonvideo games
To sign up for our daily newsletter covering the latest news, features and reviews, head HERE. For a running feed of all our stories, follow us on Twitter HERE. Or you can bookmark the Kotaku Australia homepage to visit whenever you need a news fix.

One of the biggest Cubones fans pick with the Pokémon anime universe is the staggering incompetence of Ash Ketchum as a trainer. This child, who has been 10 years old for decades, is almost impressively bad at his one life goal. After watching about 60 maddening hours of the series, I think I might have figured out why. If you want to learn the truth, read on…

There is no one Ash Ketchum. The character we think of as Ash Ketchum is merely a collection of clones with memories (very poorly) implanted into their brains, sent out into the world whenever one of the Ashes inevitably kicks the bucket in a spectacularly dumb way. 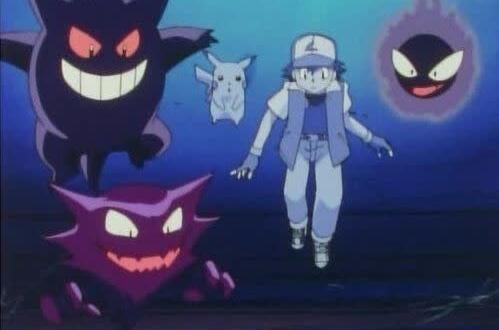 First, let’s start with the evidence of Ash being unable to remember basic shit about the world he lives in. Like when he forgot what a Gengar was, even after one helped kill him with a chandelier. Or when he had to ask his Pokédex what a Koffing was after battling James’ Koffing hundreds of times. Or when he keeps putting Pikachu, an electric type Pokémon, up against ground-and rock-type Pokémon. Or when he couldn’t tell the difference between human women and Pokémon!

With trainers this messed up, Pokémon need to repeat their own names.

Ash’s incompetence isn’t the only evidence; he’s also canonically died at least a couple of times. He goes through ordeals that have either actually killed him or really should have (that chandelier falling on him, being turned into stone, being electrocuted and set on fire constantly). But hey! Not a big deal when there’s a whole army of Ash-clones to replace him.

We already know that cloning is canonically a thing in the Pokéworld. In Pokémon: The First Movie: Mewtwo Strikes Back, the Pokéworld’s scientists are capable of cloning — or imperfectly cloning — strong Pokémon. Although Mewtwo is not a 1:1 perfect clone of Mew, we know that the technology definitely exists.

Mewtwo is certainly not the only clone in the Pokémon series. Oh no. It’s been long-speculated that Ditto is a failed clone of Mew. The technology of the Pokémon world appears to be finicky; attempts to clone a legendary Pokémon resulted in either creating grouchy ultra-powerful Pokémon that obey no human masters, or grinning, shapeless globs of pink amoeba. If you think about it, Ash really lucked out. 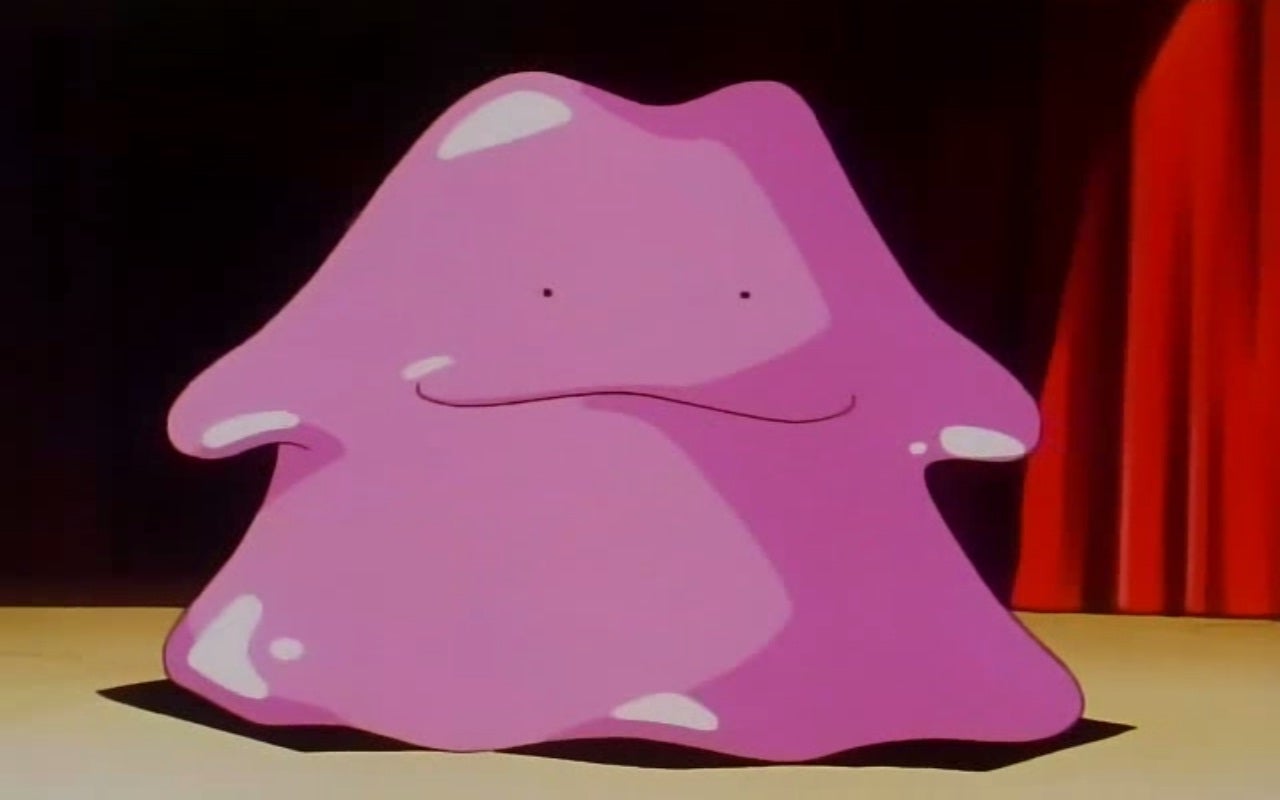 What’s more, Nurse Joy and Officer Jenny have set off alarm bells for years. If you’re unfamiliar, each town has one police officer and one nurse apiece. They are all identical, and are all named “Nurse Joy” or “Officer Jenny.” Wake up, Mareeple!

Canonically, the Joys and Jennys explain that they are identical cousins, all with the same name—which, as a concept, makes no fucking sense whatsoever. (It’s also been theorised that Joy and Jenny are Poké-clone-hybrids of the Chansey and Growlithe evolutionary lines, respectively, but let’s skip over this for now.) 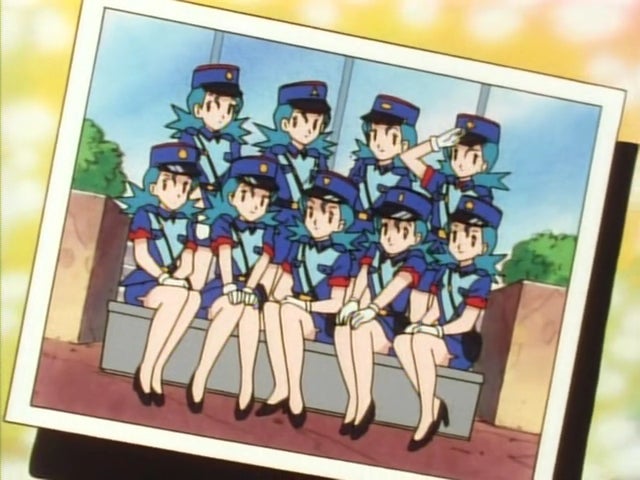 Joy and Jenny aren’t the only characters in the Poké-world who have alarming similarities to one another. You’ve got Jessie’s diva doppelgänger Jessebelle and the extremely strange trainers who are so bonded to their Pokémon that they look eerily similar. Are you handling these truth-bombs? Has your mind been blown yet? 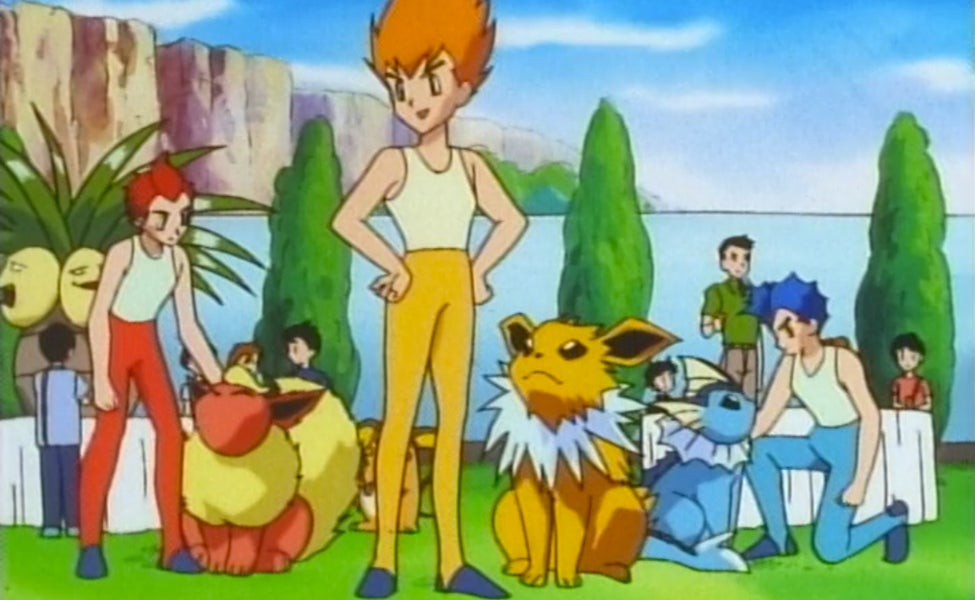 Fashion? Or something more sinister? (Screenshot: The Pokémon Company)

We even meet one of Ash’s doppelgängers, Travis, in the episode “Double Trouble.” Travis himself set out in the world with naught but a backpack and a Pikachu, just like Ash. Travis’ own mother mistook Ash for her son. She probably knows the truth, just as I do.

And the Poké-world is nothing if not an enthusiastic propaganda machine. Here are some excerpts from the Pokémon albums:

It takes a certain kind of skill

And I won’t stop until

I must define the art of capture (of all Pokémon)

What kind of Pokémon are you? How do you do the things you do?

– “What Kind of Pokemon Are You”

This propaganda fed to the “human” trainers serves to maintain dominion over their more powerful and volatile cousins, the Pokémon. Untrained, uncontrolled, or wild Pokémon are considered to be dangerous. (Think Ash’s poorly-trained Charizard, or the Tentacruel that destroys a city.) That’s why trainers capture them. Control them. Manipulate them. Trick their own society into thinking Pokémon want this, that they’re happiest being indentured servants. It goes all the way to the top, man. All the way to the top.

But honestly, what other option is there? The Poké-world’s stratocracy appears to be based entirely on battling prowess. Only the very best trainers rise to the top of the heap to become the de facto heads of local governments. But it’s all sort of pointless if the dipshit trainers bumbling around the wilderness can’t remember why they were doing this in the first place, so the Poké-nation has to remind all the clones what their objectives are. Thus: gotta catch ‘em all!

The Ash-clones and the other citizens of the Poké-nation never had a chance to break free with all this propaganda being fed into their skulls. They’re as trapped as the hosts from Westworld, Agent Smith from The Matrix, or humanity in They Live.

And by supporting this system, you’re part and parcel of keeping the Ash-clones mollified. Yes, you, Pokemon fan. Every time you pick up a Pokéball, you’re part of it. Welcome to the Pokénation.

Eleanor is a documentary producer and director. She makes videos for io9 and Gizmodo.