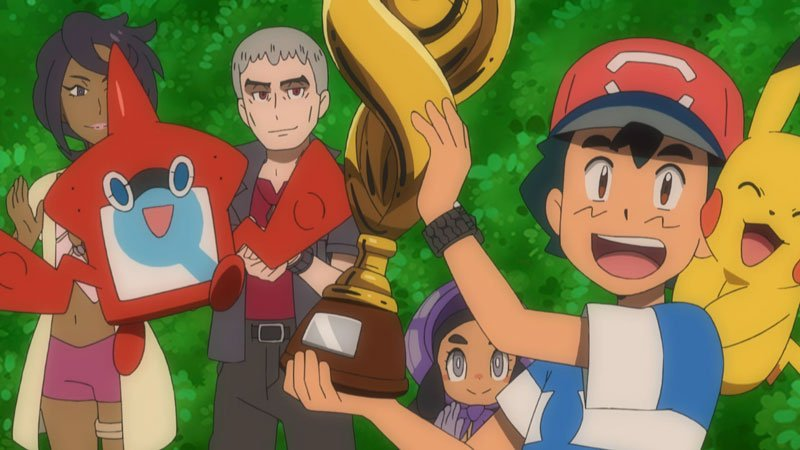 I’m so proud of this never-ageing fictional character. (Image: TV Tokyo)
To sign up for our daily newsletter covering the latest news, features and reviews, head HERE. For a running feed of all our stories, follow us on Twitter HERE. Or you can bookmark the Kotaku Australia homepage to visit whenever you need a news fix.

He’s finally bloody done it. Ash Ketchum, star of the Pokémon anime and perennial clutcher of defeat from the jaws of victory, is finally the winner of a Regional Pokémon League. The world of Pokémon fandom is rejoicing with him, including… himself?

Well, actually it’s sort of herself: in the first eight seasons of the western dub of the Pokémon anime, Ash was voiced by voiceover actress Veronica Taylor. Although since then, all the way up to the currently airing Pokémon Sun and Moon anime, Ash has been voiced by Sarah Natochenny, to many fans Taylor is the Ash voice they grew up with, and Taylor clearly still relishes just how much the character means to fans.

Which means that today’s news is extra cause for celebration. The latest episode of Sun and Moon aired in Japan this weekend, and saw Ash triumph over Gladion to become the inaugural winner of the Alola Region Pokémon League.

While previously in the anime Ash has won major tournaments like the Orange Island Challenge and Battle Frontier, neither held the same status as either the anime or the video game series’ traditional Regional League competitions.

All the way from Kanto up to Kalos, Ash has faced crushing defeat after crushing defeat in the anime versions of the Regional League battles — the Kalos loss in Pokémon XYZ being the closest his got, causing heartbreak among fans when it seemed like he had a killer Pokémon team and was, at last, about to break his losing streak. But two years later he’s finally done it, and Taylor took to Twitter (with the help of a little Ash figurine) to deliver an inspirational message to the character she once embodied:

Congratulations to Ash Ketchum on winning the Pokémon League from Ash’s ‘younger’ self, circa 1998…yup, hard work, determination, good friends, and a bit of luck pay off! #pokemon #ashketchum #winning pic.twitter.com/JhgRcGJBEy

Hey, Ash! It’s your younger — but still the same age — self, Ash Ketchum! Congratulations on winning the Pokémon League! I wanna say I always knew you could do it, but really? I didn’t. I only knew that to achieve your goals, you had to train hard — and that is true, but along the way I’ve found out the importance of constantly learning, and challenging yourself, and being open to new experiences. That, by helping others, you help yourself. And mostly: it’s not winning that counts, but how you play the game.

But man, it sure feels good to win. Congratulations, and keep up the good work. I gotta go — Mum’s making dinner with Mr. Mime. Catch you later!

Awww. It’s nice to see Taylor acknowledge her character’s journey, even if she’s no longer actually a part of it. It makes Ash’s win all the sweeter.