Call Of Duty: Modern Warfare’s Developers Are Still Deciding How Disturbing To Get

In a hotel suite at E3 2019, Infinity Ward studio art director Joel Emslie and single-player design director Jacob Minkoff showed off two levels from the Call of Duty: Modern Warfare campaign. They showed these same two levels to the press this past May, but the messaging around those levels has changed.

At this presentation, the two designers leaned hard on the realism and the potential emotional discomfort that players would feel while playing the campaign.

The creative team is, apparently, still figuring out exactly how much emotional discomfort they want to dole out. At least one line of dialogue from the footage shown to the press is going to be removed from Modern Warfare later, they said.

The line in question is delivered by a Russian soldier who has apprehended a girl from the fictional country of Ursekstan, where some of the game will be set. The soldier considers whether he should hand over this girl to his commanding officer who “likes the young ones.”

During this scene, the player is inhabiting a different young Ursekstan girl who is in the midst of sneaking away from the Russian forces. This young girl has just watched both of her parents die before her eyes; the scene culminates with her eventually getting a gun and forcing herself to use it.

It’s already a harrowing scene even without the implication of sexual paedophilic peril.

The first scene that the developers showed was harrowing in a different way. It starts with a terrorist attack in London, then transitions to a townhouse where some of the terrorists (and some civilians) are staying. The player is part of a special forces team that infiltrates this house, takes out each one of the terrorists and leaves the civilians unharmed—ideally, that is. This scene shows off the extent of the research that the Modern Warfare team did to make the game feel real.

The soldiers’ movements are based on the movements of real-life Navy SEALs who consulted on Modern Warfare, and the design team spent “a year and a half” perfecting the look of the night-vision sequences. 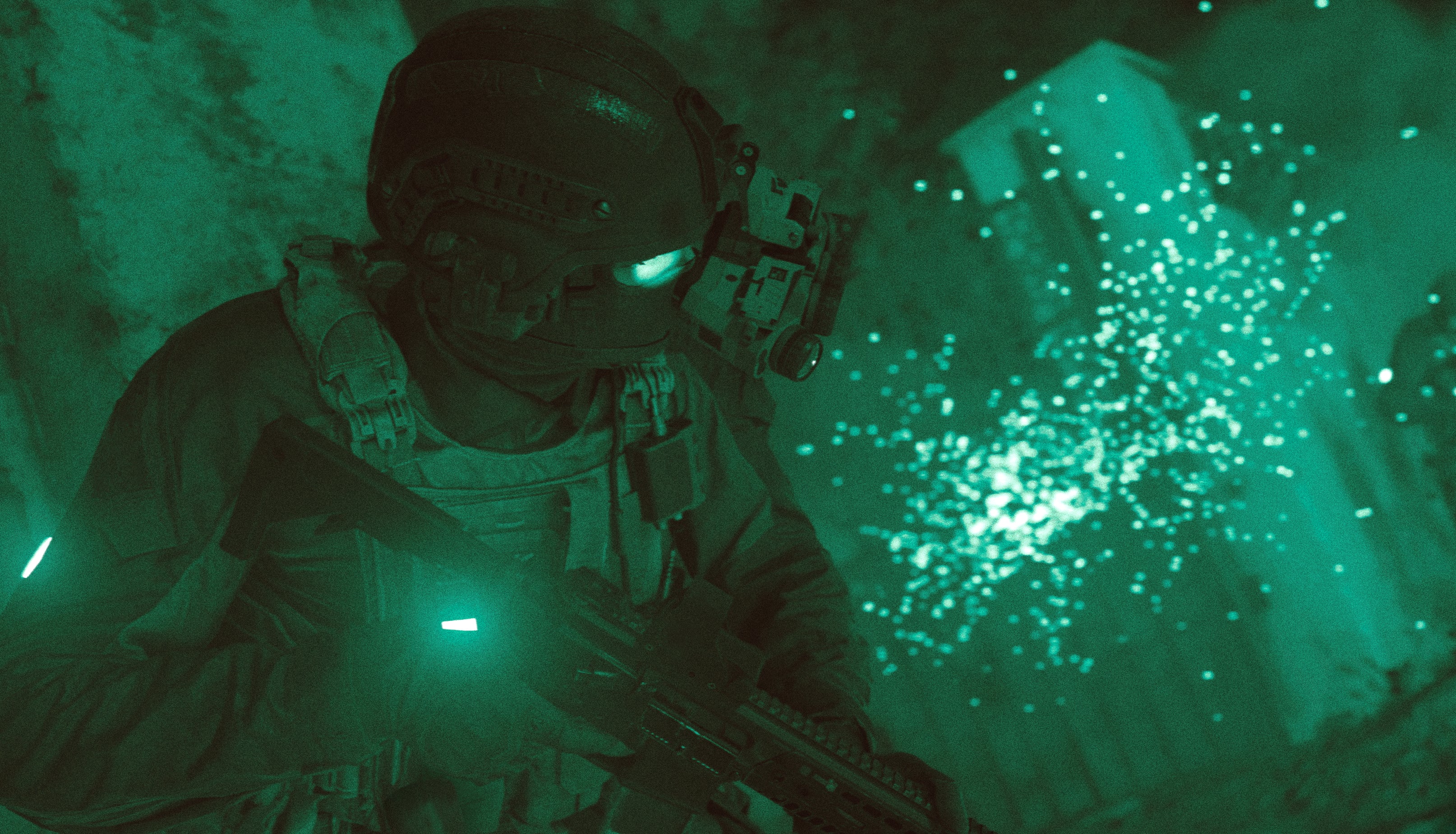 One of the civilians in this house is a woman holding a baby. Shooting the baby is not advisable. “If you comport yourself in a way not befitting a soldier, the game will fail you,” Minkoff said. “But if you’re doing your job?” The game will try to figure out if you shot that baby on purpose or accidentally.

“We have a lot of heuristics running behind the scenes to try to determine: Are you a freaking psycho who’s just shooting everything? Fine. But if you’re really trying to do your job and you’re just like, ‘Oh God damn it, I made a mistake and I feel really bad about that,’ we want you to feel that. We want you to really sit with that.”

Those kinds of mistakes could result in some different dialogue responses from the people around you. “If you are taking an action that is over the line but understandable, your dialogue with your allies will branch,” Minkoff said. “In some cases, their performances will branch, and they will call you out on it, and there will be other animated captured performances.”

“Now, the story itself is linear, but in the context of the mission, if you go up to the line but you don’t cross it,” he said, “what you will end up with is characters who are saying things like, ‘Dude, what did you just do? God damn it. I hope nobody hears about this.’”

Emslie and Minkoff said they hoped that this level of realism, as well as the difficult challenges that players will face in the campaign, will spark some sympathy in the player towards soldiers, and also, towards the people who live in neighbourhoods that become war zones.

“We want you to experience just how difficult it is for a soldier to face the modern battlefield,” said Minkoff. “And we talk about the world that they have to deal with, and it’s a world where one man’s freedom fighter is another man’s terrorist. We talk about this a lot. We say, what’s the difference between a freedom fighter and a terrorist? The difference is what your government says, right? Who does the CIA funnel arms to this week? Those are freedom fighters. Who are they fighting against, this week? Oh, those are the terrorists.”

That includes the introduction of the character Farah. The scene featuring her was a flashback to a notably tragic day in her childhood. She sees her mother crushed to death in the rubble of a building hit by some sort of artillery strike, and then she watches her father get murdered by a Russian soldier. Farah and her young brother, both of whom appear to be around 7 to 10 years old, must spring back almost immediately from their parents’ death to work together to overcome the soldier who killed their dad.

Farah takes his gas mask, sneaks out of their home, and evades the remaining Russian soldiers. At the end of this level, Farah finds a pistol and, with a shaking hand, lifts it to aim at one of the Russian fighters.

Farah will grow up to become a rebel fighter, although Emslie and Minkoff did not specify on which side of the conflict she would end up. It’s clear just from this early scene, though, that she is meant to seem relatable to English-speaking audiences, because Farah’s entire family speaks English, albeit with accents, even in the privacy of their own home and in a very stressful situation. By contrast, all of the Russian soldiers only speak in Russian, with subtitles.

The Russian soldiers’ perspective wasn’t really made clear in the scene. The hulking, masked Russian soldier who kills Farah’s father is “a caricature, but it was, for me, artistic and metaphoric,” said Emslie. “You take some creative liberties from time to time to make things stand out and be special.”

Rather than dealing with an American occupying force in their country, Farah witnesses a Russian invading force. This particular group of soldiers she encounters is not doing what they’re supposed to be doing. Minkoff was reluctant to spoil any major plot beats, but did note that one of the antagonists would be a Russian general, who he described as “one particular rogue general, who you should think of like Colonel Kurtz in Apocalypse Now, who goes off the reservation and says: ‘I know how to protect Russia. Don’t you worry about legality and all that. This country—this fictional country of Ursekstan—this is a breeding ground for terrorists. And if they can’t administrate themselves, I will do it for them.’ And, ultimately, we work with Russians to take him out, because he’s a problem.”

After that response, I asked my question about the Russian soldier who had noted that his commanding officer “likes the young ones,” and asked about the implied sexual peril towards the player character in that moment, who is herself a young girl trying to sneak her way out of that situation.

“Part of the reality of war is that there are people who face unpleasant events, and there is a portion—I’m really trying to work around spoilers—but what we don’t want to shy away from is the realities that some people face in war,” Minkoff said. “And some of those things are touched upon in the storyline. All I can tell you is that, as with every case, we have many consultants on staff.”

As a follow-up, I asked Minkoff about whether any of the team’s research about child soldiers had involved, say, pedophile rapists. At that point, he had a very different response.

“This is a fictionalised world,” he said. “This is not real life. This is not real politics. This is not even a real country in the world. So, no. These events are not specific to any real-world research. What this is, is an entertainment product with a fictional story.” But, I asked, it’s a story that is intended to be grounded in realism, right? Minkoff said “yes,” and left it at that. 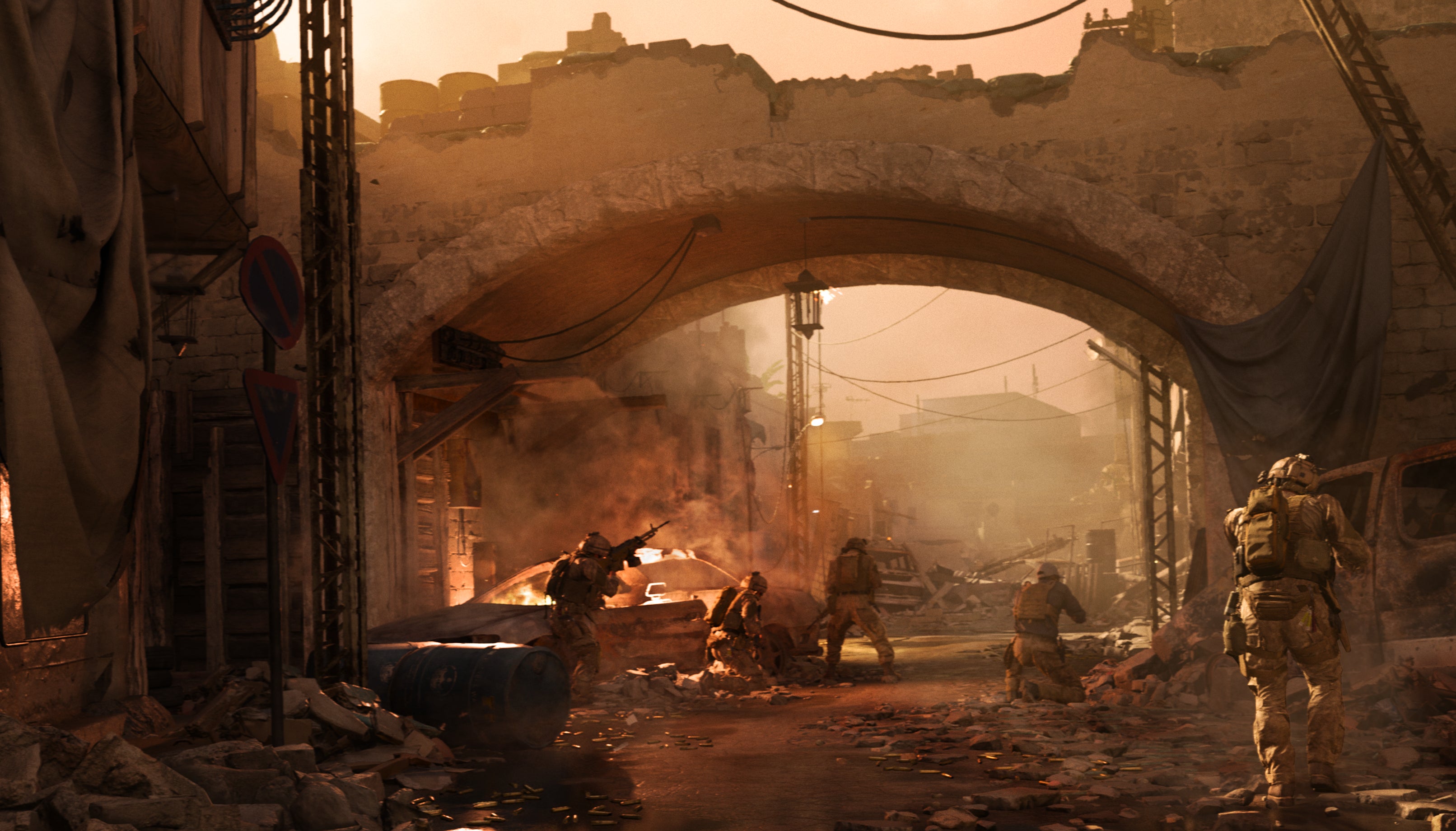 After the presentation ended, the PR team followed up with me to note that the line in question was going to be cut from the game, and that it was originally intended as foreshadowing for a later scene in the Modern Warfare campaign which has also apparently been cut.

Although Farah will apparently face some significant perils in this game, this particular peril doesn’t appear to be one of them.

At the beginning of the presentation, Minkoff had noted that even people who seem like villains always see themselves as “the hero of their own story.”

“We want to make sure that in this story you see war from all of these varied perspectives,” he said. “You may not agree with what a given character decides they want to do, and you may end up labelling them a terrorist or a villain, but you should understand why they fight.”

The two scenes do not appear to depict these shades of grey, though. These two scenes depict a binary view of right and wrong. There are terrorists, who you can and should shoot, and civilians, who you should not shoot. There are good soldiers, who follow the right orders from the right people, and then there are bad soldiers, who follow bad orders.

Modern Warfare will have win states and fail states, and its fail states will apparently also make a moral judgment about whether you’ve effectively followed this good-and-evil binary.

Modern Warfare is still in development and the game has already changed, even in terms of what will be included in the final versions of the scenes that have been shown to the press. The seemingly binary nature of these scenes could end up being a lot more complicated in practice. Perhaps Farah will end up working with American soldiers to take down the “bad” Russian soldiers. Or perhaps she will decide, as an adult, that she is opposed to Western interlopers in her country. The latter seems unlikely, though, given her apparent preference for speaking English.

I would like to believe the pitch that I’ve heard, that this is a Modern Warfare game that actually considers multiple perspectives in war and encourages the player to sympathise with different fighters’ plights. The two scenes don’t necessarily show that. But, again, the game could change. It already has.