Geoff Johns’ Doomsday Clock opus has been quietly ticking along at its own pace independent of the rest of DC’s other comics, but a revelation Doctor Manhattan makes in this week’s issue #10 has a significant impact on virtually each and every other character that exists within the publisher’s comics multiverse.

As far as plot developments go, what this week’s comic introduces is rather significant for the Doomsday Clock series itself, but for Doctor Manhattan — a being imbued with a godlike ability to manipulate reality — it’s the sort of strange turn of events that isn’t all that surprising.

For the past few issues of Doomsday Clock, Doctor Manhattan has become obsessed with the last vision he is able to see in the future before his multidimensional sight is no longer able to perceive anything past a specific point.

Manhattan sees that after facing off against Superman — a person who embodies the crystallised power of hope throughout his entire home universe — he is fated to fade away along with the rest of all things in existence.

After his fight with Superman, there’s nothing in the future at all except at yawning blackness, the absence of all things. Either Manhattan’s vision is failing, which can sometimes happen, or, he realises, there’s simply nothing there to see.

Never really one to be alarmed by such things, Manhattan sees it as a puzzle to reason his way through because he genuinely cannot fathom why he and an enraged Superman would ever come to blows. The even larger questions on Manhattan’s mind, though, have centred on whether it’s him or Superman who are ultimately responsible for the destruction of the multiverse.

The answers, of course, are complicated. 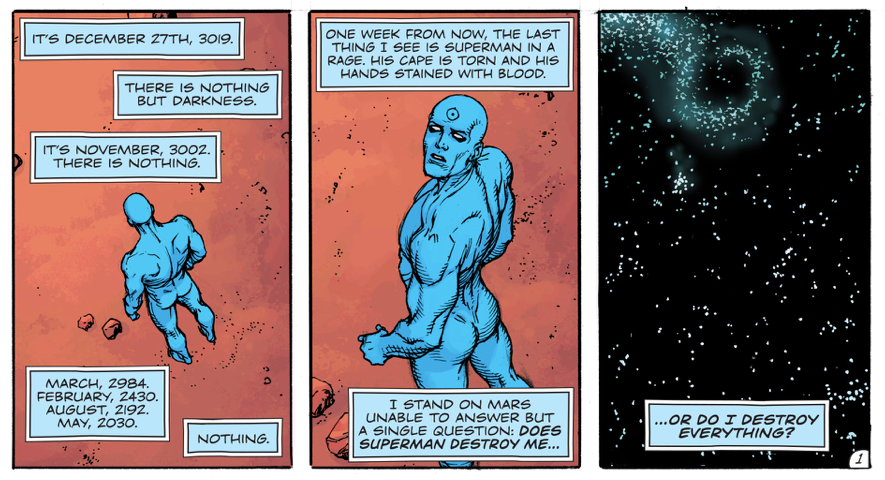 Doctor Manhattan’s jump over into the prime DC universe is a continuation of the role he played in DC’s Flashpoint event which resulted in the creation of Prime Earth, an amalgam of the previous main Earth, the Wildstorm Universe and pieces of the Vertigo brand traditionally kept separate from DC’s more mainstream books.

Having found no point in staying in his native reality, Manhattan journeyed to Prime Earth in the hopes that he would be able to start a new life for himself, but he found that the new reality’s connection to a grand multiverse made it strangely difficult for him to maintain his perception of time and space.

While Doctor Manhattan has been struggling to understand the strange, new multiverse by gazing at multiple important points in time, the rest of the world had become fixated on the “Superman Theory” — the idea that the reason so many of the world’s metahumans originate in the United States is that the government is actually responsible for their creation.

As the theory grows in popularity, various governments from the world over respond by forming their own teams of metahumans as a show of hard power, and an even larger amount of scrutiny is paid to Superman, who enjoys an uneasy startup as an internationally-supported hero.

During a tense incident between Firestorm and the Russian hero Pozhar, everything blows up in Superman’s face both literally and metaphorically when the two energy-wielding heroes’ fight accidentally transmutes a crowd of bystanders into glass.

Understandably, Firestorm is horrified and distraught at what he’s done, but Superman’s confident that he can help his ally reverse the process and diffuse the situation. But before the American heroes have a chance to explain themselves, Vladimir Putin declares war on America, soldiers fire at Superman and Firestorm, and many of the still-glass civilians are shattered in the process.

The conflict culminates in an even larger explosion that knocks both Superman and Firestorm out, causing the bonded hero to unfuse.

While most of the world believes that Superman was attempting to protect Firestorm, who was responsible for the accident, Batman and the remaining members of the Justice League quickly deduce that the energy that caused the explosion shares traits with Doctor Manhattan’s, and the heroes set out for the surface of Mars to take him on.

It does not go well for them. 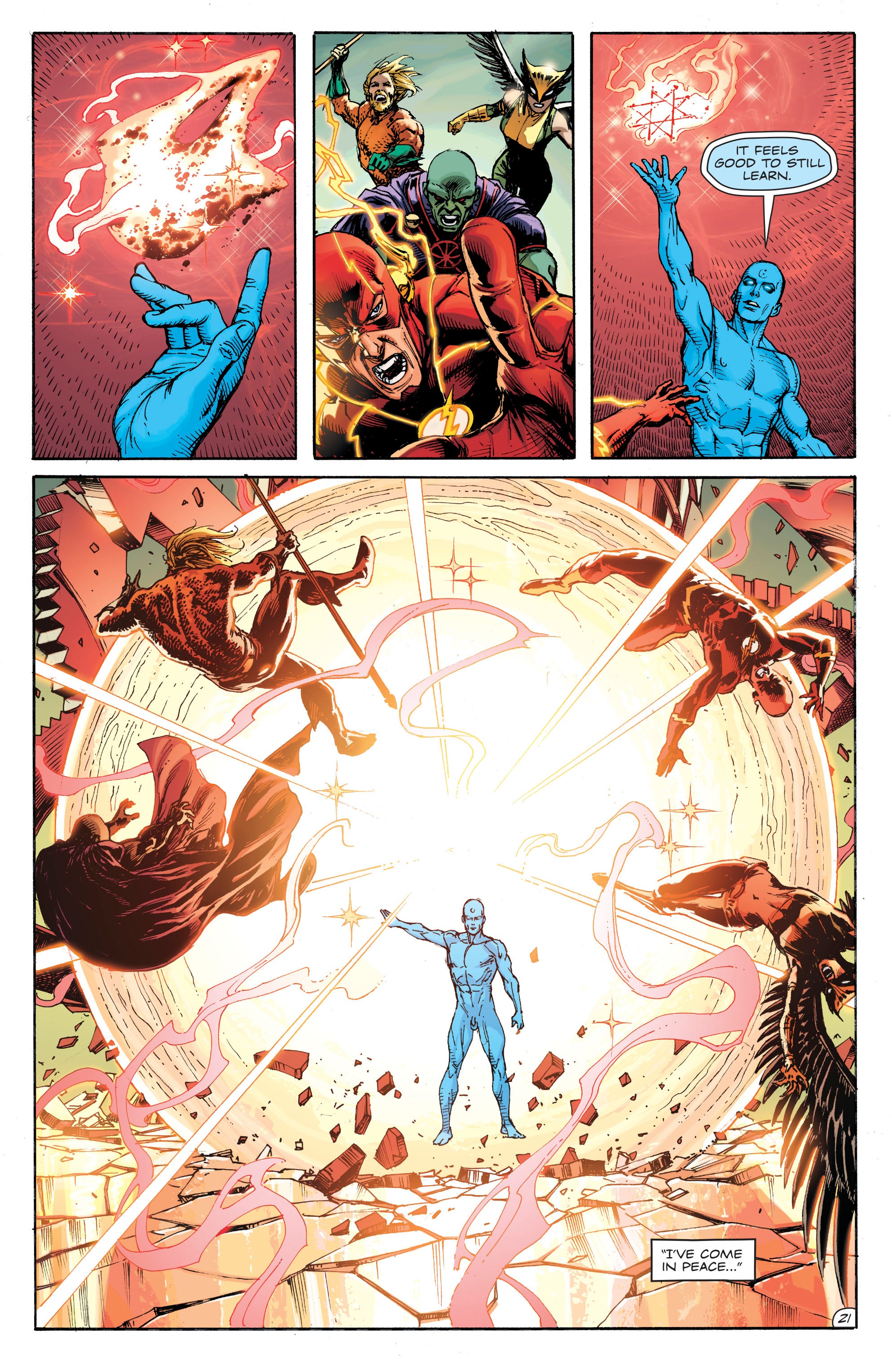 This week’s issue #10 takes places in the past, present and future, and closely follows just what Doctor Manhattan’s been learning about himself and Superman during his time in Prime Earth’s reality.

If his oncoming fight with Superman is the event in the future that ends all things, Manhattan uses his reality-altering abilities to poke and prod at the events of history to see how his changing things about Superman’s existence could have a cascading effect on the entire universe.

As Doctor Manhattan shifts details about Superman’s exact origins (all nods to DC’s various reboots over the decades), he soon realises the universe he currently exists in is not truly part of the proper multiverse, but rather a metaverse which exists, hierarchically-speaking, above others.

Superman is but one person who exists within the metaverse, but he’s also the metaverse’s linchpin, the being around which all of its most significant events revolve. 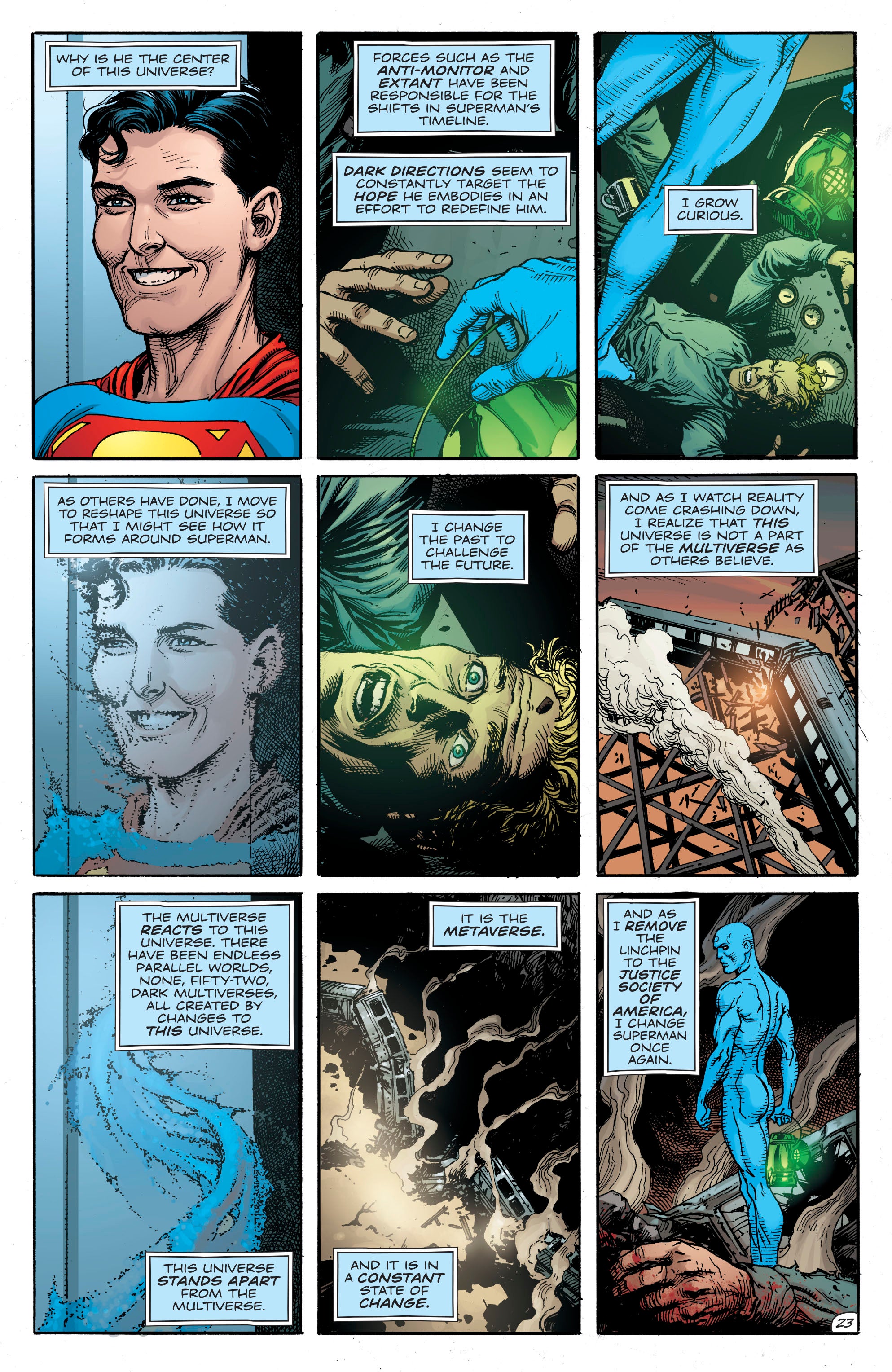 From the outside looking in, Manhattan’s realisation about who and what Superman is provides a very nifty way of acknowledging how central a character Superman is to DC’s brand. But within the comic itself, it leads the blue thinker to a conclusion that’s been rather evident for a while now.

Doctor Manhattan thinks back on how the Earth’s heroes — the Flash in particular — fought to resist his machinations during Flashpoint, and he comes to the conclusion that the metaverse is a living, reacting thing that uses its heroes as a means of correcting anomalies that should not be.

Anomalies such as him, who find pleasure in putting things where they aren’t meant to exist simply because he’s grown weary of reality. Manhattan finally sees that he’s one of Doomsday Clock’s main villains and honestly, it’s about damn time.