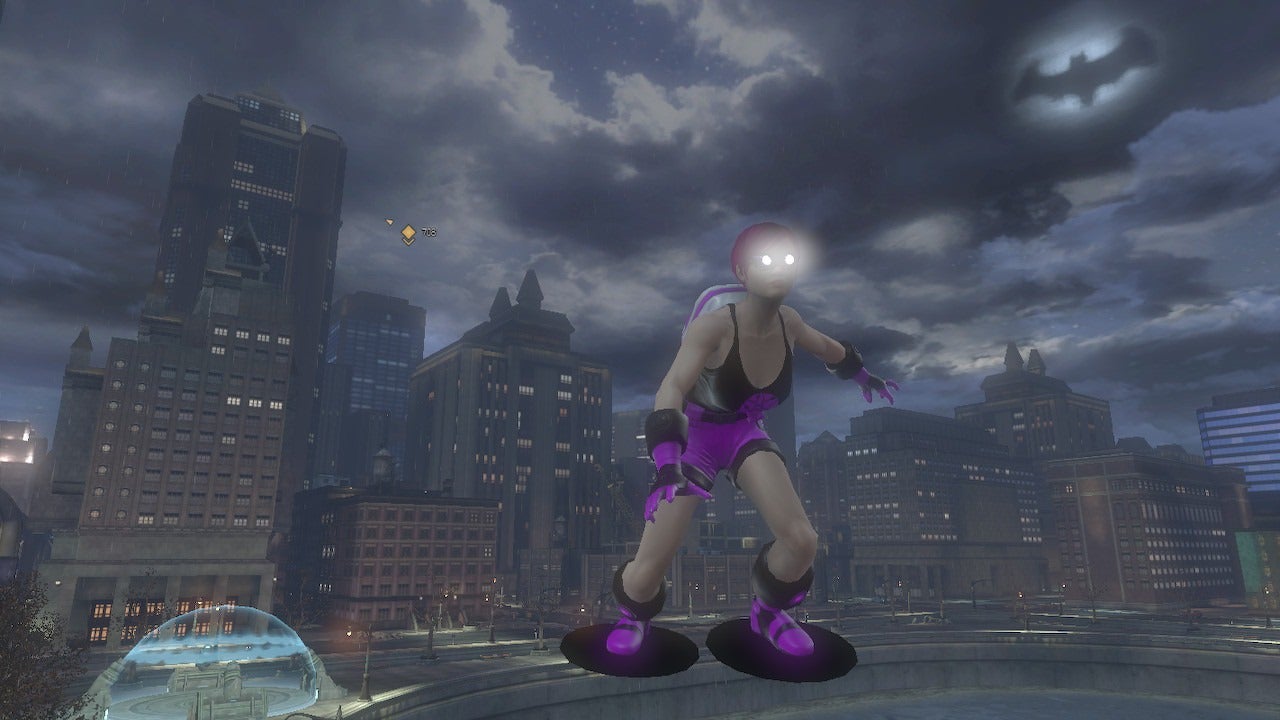 On a large computer monitor or television set hooked to an Xbox One or PlayStation 4, DC Comics’ eight-year-old, free-to-play massively multiplayer online superhero role-playing game looks pretty rough. On a lesser-powered console like the Switch with its smallish handheld display, DC Universe Online is a perfect portable MMO.

DC Universe never was a looker. Released in 2011 on PC and PlayStation 3, the online game has always sported a generic comic book design reminiscent of the DC comic books I remember reading as a young teen. Not a lot of personality, but the powers and costumes are cool.

Over the past eight years, Sony Online Entertainment and then Daybreak Games have released a bunch of new powers, costume bits, and story content for DC Universe Online, but the core game has stayed the same. Now the game is out for the Nintendo Switch and it’s exactly as I remember it, only smaller and more convenient.

The story remains the same. Brainiac is on the verge of conquering the Earth. In a last-ditch attempt to save the planet, Lex Luthor from the future travels to the past (technically the present) to release “exobytes” into the atmosphere. Exobytes are super-powers which are stored as data. They transform normal humans into superhumans on contact. Players take on the role of these new supers, fighting for truth, justice, and the American way. Or fighting for evil. That’s always a choice.

The coolest aspect of the Switch version of DC Universe Online is that it gets its own dedicated server. Crossplay between platforms is nice, but a dedicated Switch server means everybody playing the game on Nintendo’s console starts at level one. Payers familiar with how the game plays on other platforms will have a leg up on newcomers, but for the first week or so, everybody will be busy chasing thugs and levelling up. 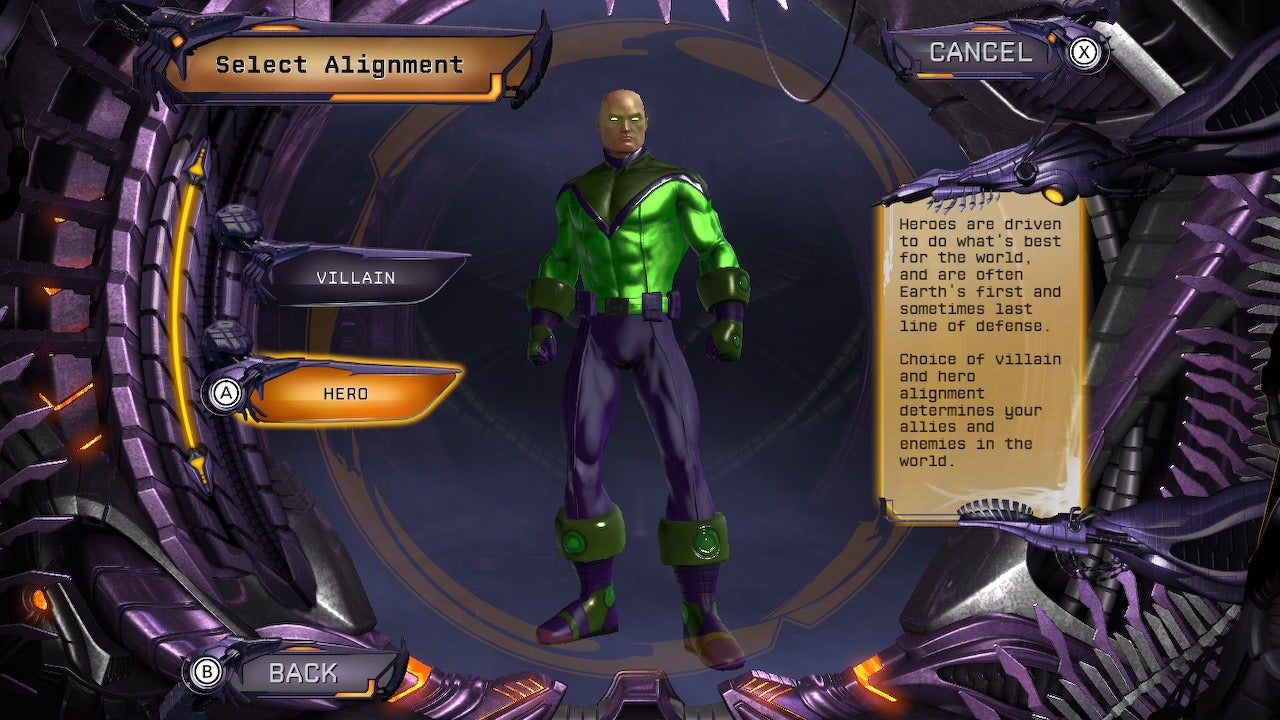 It also means there are plenty of free character names available for players to apply to their superhero or villain creations. The game begins with players creating a hero or villain, selecting their powers, weapons, appearance, and creating a costume from an available selection of parts. Players can create a completely original hero, or start with a costume inspired by iconic DC characters.

Character creation is one of the places DC Universe Online’s free-to-play nature is felt most acutely. There are 15 different power sets in the game. Only six of these — nature, sorcery, mental, ice, fire, and gadgets — are available for free. In order to unlock more, like Green Lantern-style light powers, players must purchase downloadable content packs in the in-game store. The same goes for creating heroes with powers inspired by any actual DC heroes. Some heroes’ powers, like those belonging to Superman and Wonder Woman, are available for free. Others, like Livewire or Black Lightning’s powers, must be purchased.

In order to create my dream character, I had to purchase the quantum power set and the skimming movement type via microtransactions. There is also an option to purchase a membership to the game, which provides instant access to all available DLC packs plus marketplace discounts, the ability to form a league, unlimited in-game currency, and more. For now, I am happy with the stuff I bought to bring my quantum brawler, Entanglement, to fruition. 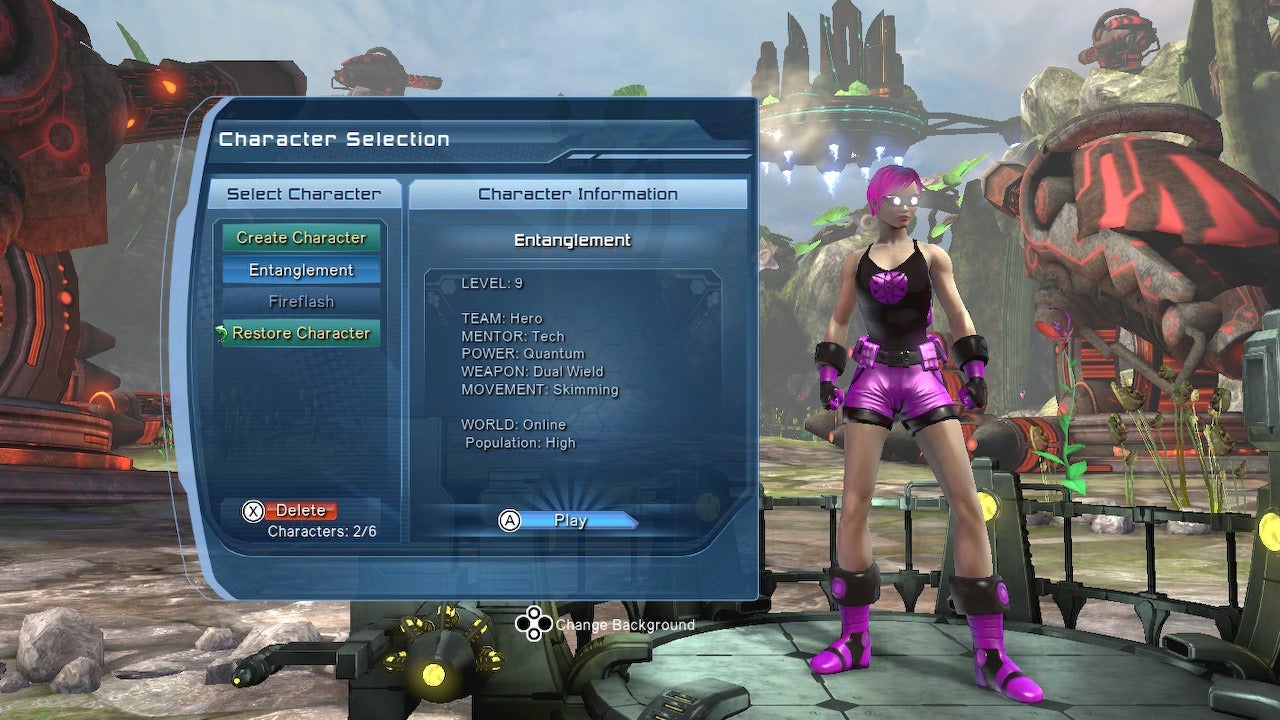 I am a sucker for simple costumes

Once inside the game, DC Universe Online is very handheld-friendly. It’s an action role-playing game. X and Y buttons perform light and heavy attacks. There are eight spots for powers and items on the game’s hot bar, activated by a combination of shoulder and face buttons. The B button jumps and activates a hero or villain’s travel power, allowing them to jump, fly, run, or float through Metropolis or Gotham City.

It’s a very structured MMO. Players take on a series of story-based missions which generally culminate in a dungeon of some sort. Entanglement had to battle Scarecrow’s cronies on the streets of Gotham, as well as help doctors treat patients affected by his fear gas. Eventually, she uncovered Scarecrow’s underground lair, rescuing Batwoman and serving quantum-powered justice to the deranged villain. 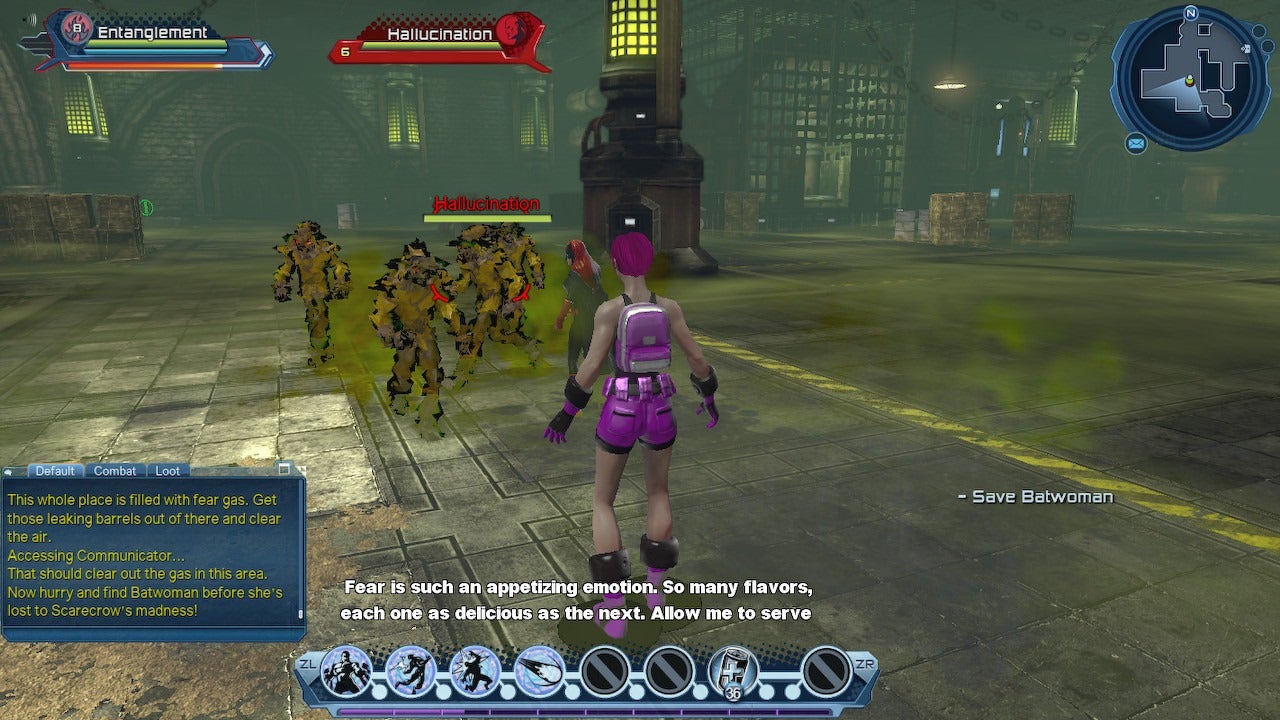 That caper complete, Entanglement headed back to the Gotham Police Department, where Batwoman gave her a hot tip about Bane, setting the next series of missions in motion. Eventually, Entanglement will have to group with other players and maybe get a nickname so I don’t have to type out her full name every time. But there’s plenty of solo content in DC Universe Online to keep me occupied until I’m ready for a team-up.

I wasn’t sure I’d even get this far into DC Universe Online for the Switch, having played a large chunk of this content of different platforms years in the past. But there’s something neat about playing the MMO on a small, portable screen.

The graphics don’t feel quite as dated when I’m laying back in bed staring at a 720p display. I also was easily able to take the game with me earlier today when I was at my doctor’s office receiving an infusion of antibiotics. (I imagined it was superhero serum. I am a giant dork.)

If you can wade through the mess of microtransactions (maybe avoid the in-game shop), there’s plenty of fun to be had in DC Universe Online. Pretending to be a superhero or villain is one of my favourite things to do, and this is a fine, free way to do it.