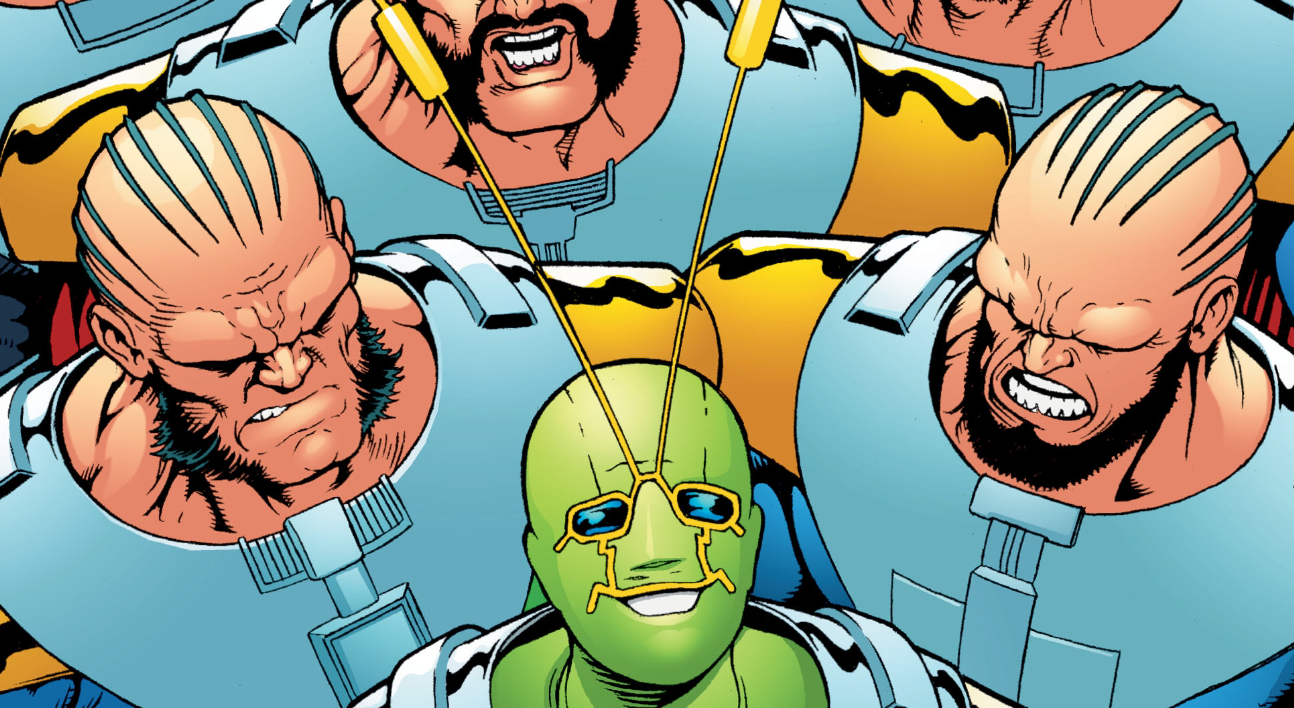 A crowd of Monitors aren’t at all happy to see Ambush Bug on the cover of <em>Ambush Bug: Year None</em> #5. (Image: Kevin Maguire, DC Comics)
To sign up for our daily newsletter covering the latest news, features and reviews, head HERE. For a running feed of all our stories, follow us on Twitter HERE. Or you can bookmark the Kotaku Australia homepage to visit whenever you need a news fix.

A teleporting nuisance reminiscent of Bugs Bunny, Ambush Bug was created by Keith Giffen and first appeared as a villain in DC Comics Presents #52. 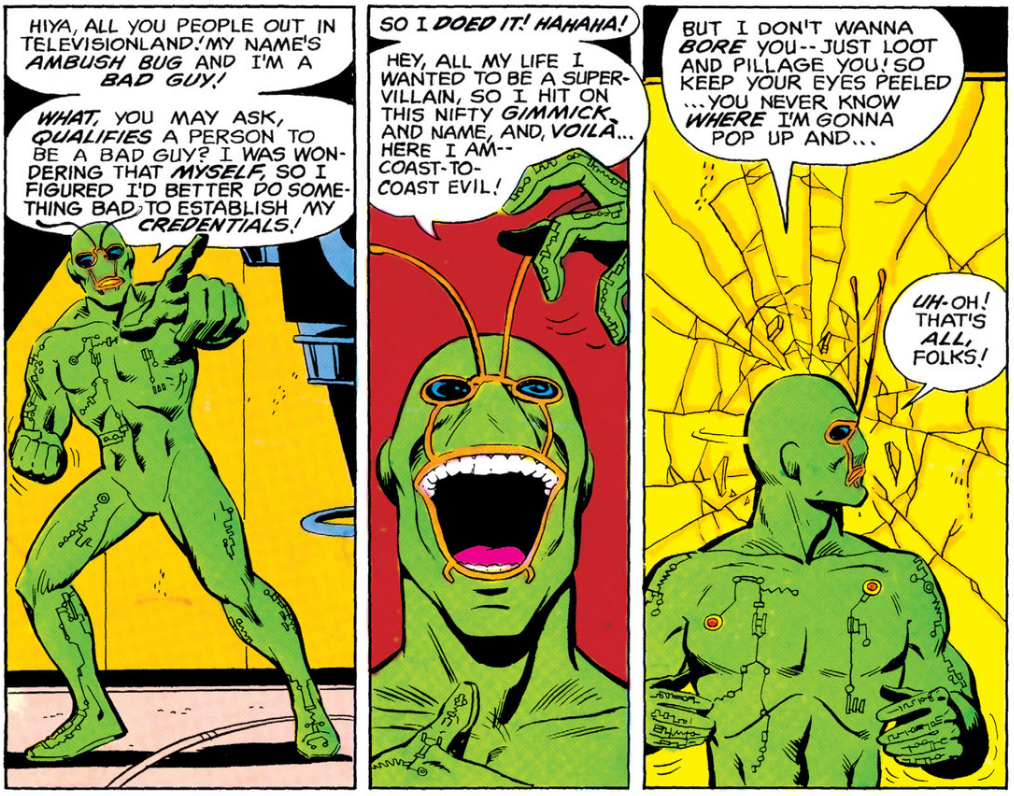 Aside from a maniacal hunger for fame and attention, the agenda of the man — also known as Irwin Schwab — wasn’t really clear. (I’d totally forgotten that he apparently murders Metropolis’ district attorney in his first appearance, a pretty serious crime that never gets addressed in the rest of the story!) He pesters Superman for the bulk of the issue, a modus operandi that would become the defining trend of his first few guest appearances in the Superman family of books.

Ambush Bug spent most of Supergirl #16 thinking Kara Zor-El was a transformed version of her cousin and made her life hell, too. The Bug wound up popping up in work done by a small cohort of other writers like Paul Kupperberg and frequent Giffen collaborator Robert Loren Fleming. 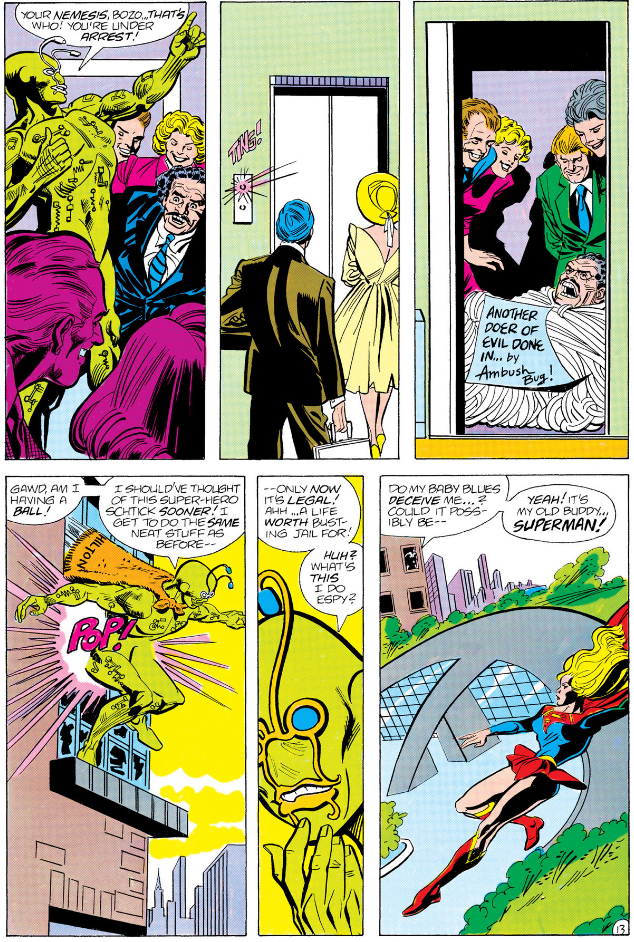 Nowadays, Giffen is perhaps best known as part of the nucleus that powered the “Bwahaha” Justice League of the early 1990s. That series saw Giffen, J.M. DeMatteis, Kevin Maguire and their co-creators turn DC’s top-flight super-team into a workplace comedy. But long before that change of pace turned the Justice League International into a hit, Giffen was a workhorse in the DC Comics creative stable. He’d been a constant presence on various Superman and Legion of Superheroes titles for years as a penciler, co-plotter and breakdown specialist.

Ambush Bug gave Giffen the opportunity to goof around in the same spaces where he’d be doing more straight-ahead work. Looking back at a career that’s made him one of the premier purveyors of superhero humour, the kneejerk reflex might be to say that Giffen doesn’t take any of this seriously.

He’s constantly made Superman seem like a big dumb goof and made fun of Batman’s post-1966 self-seriousness. But the creator does take superhero comics seriously, in a way that’s tried to broaden the visual and creative horizons of the medium. 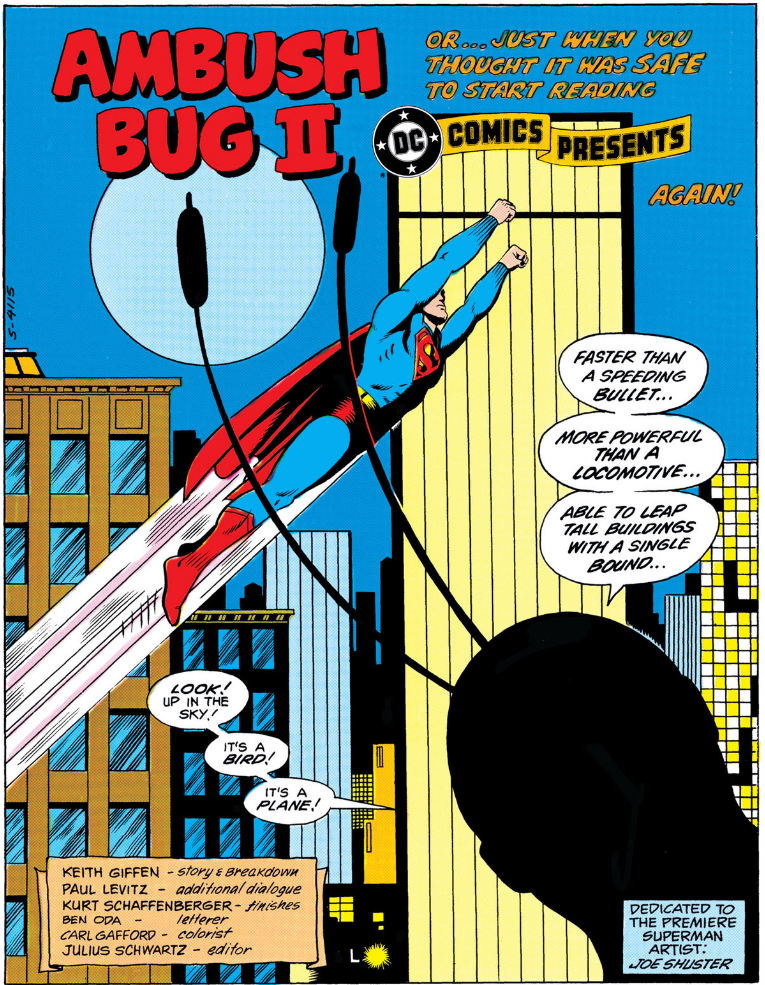 Take a look at Ambush Bug’s second appearance in DC Comics Presents #59, where the character hitches a ride while Superman is time-travelling and causes all kinds of chaos into the future. Written by Giffen with additional dialogue by Paul Levitz, inks by Kurt Schaffenberger, lettering by Ben Oda and colours by Carl Gafford, the issue is dedicated to “the premiere Superman artist Joe Shuster.”

If all you’re doing is focusing on the jokes, then you’ll miss the way that Giffen’s general artistic approach honours the Man of Steel’s co-creator, with linework, poses and details designed to call back to yesteryear.

A Superman who looks like he did in the 1940s complains about Ambush Bug in the 30th Century. (Image: Keith Giffen, Kurt Schaffenberger, Ben Oda, Carl Gafford, DC Comics)

The way Giffen draws Superman’s unembellished face — squinty eyes, square jaw with cleft chin — leap-frogs backward over the Curt Swan-influenced iteration of the character that had become the house-style default.

Putting that retro styling in a story set 1,000 years in the future drives home a point about the character Shuster and Jerry Siegel created: if Superman’s going to be around forever, let’s not forget where he came from. It’s a heady meta-element that feels endearingly sincere because it’s nestled in a comic that’s making fun of itself. 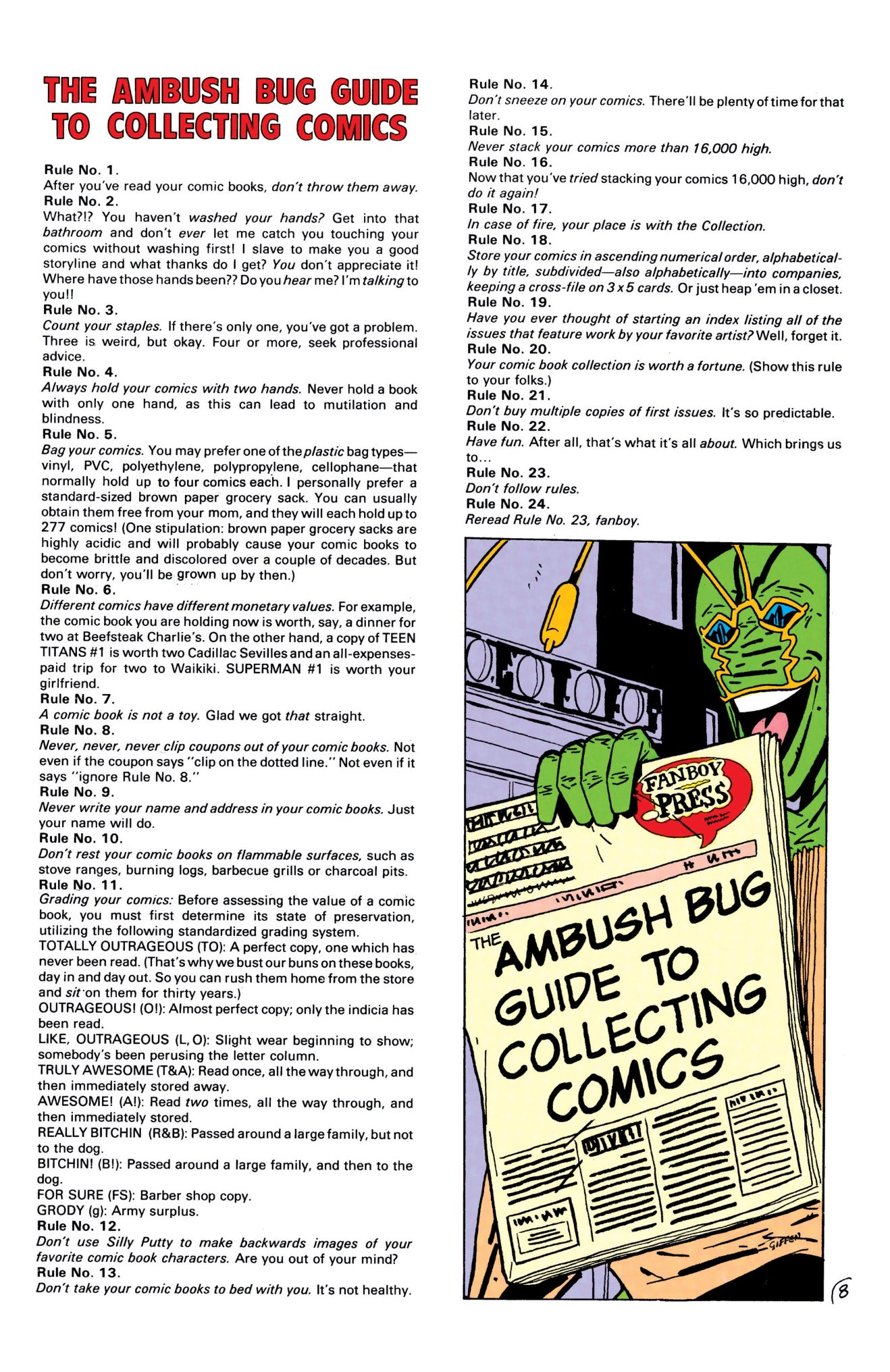 Ambush Bug quickly evolved into a guy who regularly breaks the fourth wall, knowing full well that he’s a comic book character. As he graduated into a leading role in various miniseries and one-shots, his stories became a way to look at bygone modes and dominant tropes in superhero comics.

His first solo miniseries in 1985 solidified a turn to heroics, casting him in the role of a private eye who constantly runs into the handiwork of Jonni DC, an old-school mascot character who explained away continuity screw-ups. 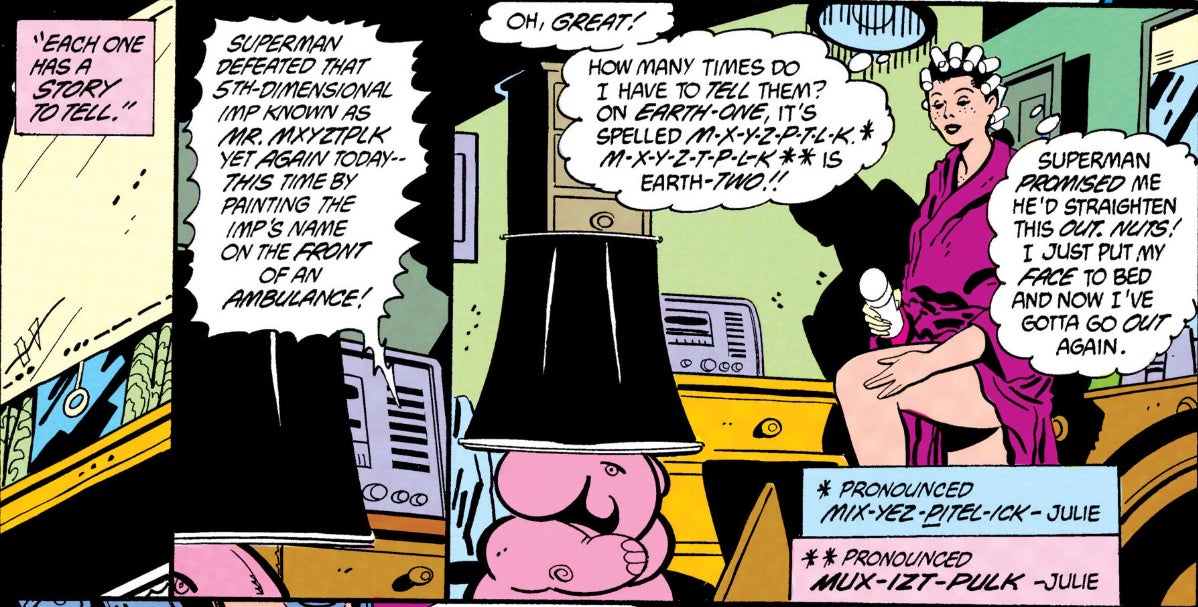 But any pretence at telling a digestible story falls by the wayside as Giffen and crew catalogue and carp at the weirdest personas and tics from DC Comics’ publishing history. There are running jokes about which way Mxyzptlk/Mxyztplk gets pronounced on which alternate Earth.

Those riffs dovetail into jokes about Roy Thomas, the history-obsessed fan-turned-writer for whom Earth-2 was a retro-centric labour of love. Time-lost oddballs from past eras of DC Comics were trotted out for guffaws and dozens of old genre tropes that were once played straight became fodder for jokes. 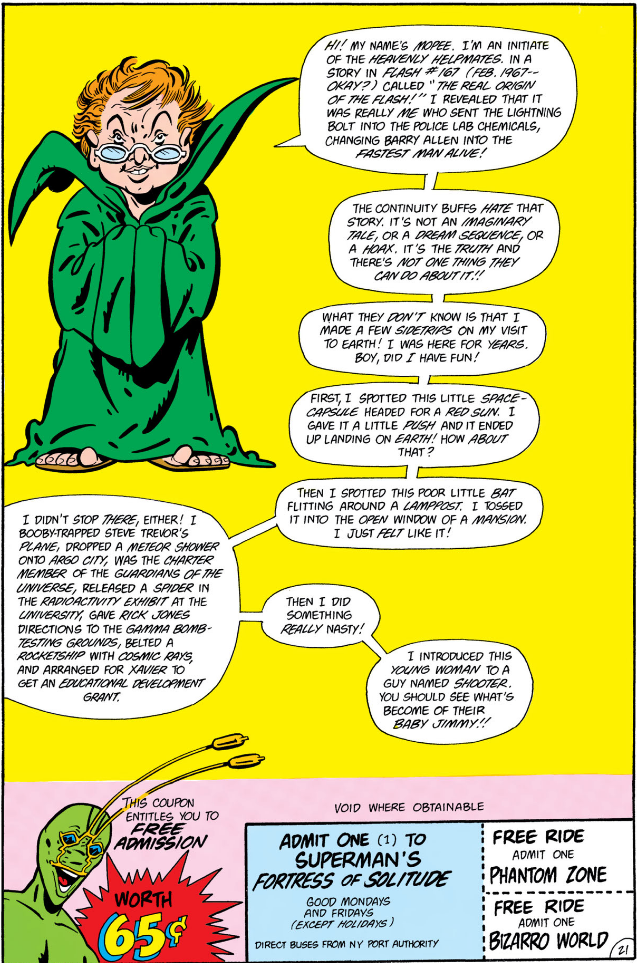 Every Ambush Bug project helmed by Giffen has taken aim at the vicissitudes of fickle fans and the hype-hungry sales market, while also nakedly trying to manipulate those fans with hype that might nudge sales a little higher.

Darkseid made cameo appearances in every issue of the 1985 series, ending in a sequence that literally deflated any excitement that might have been built up. 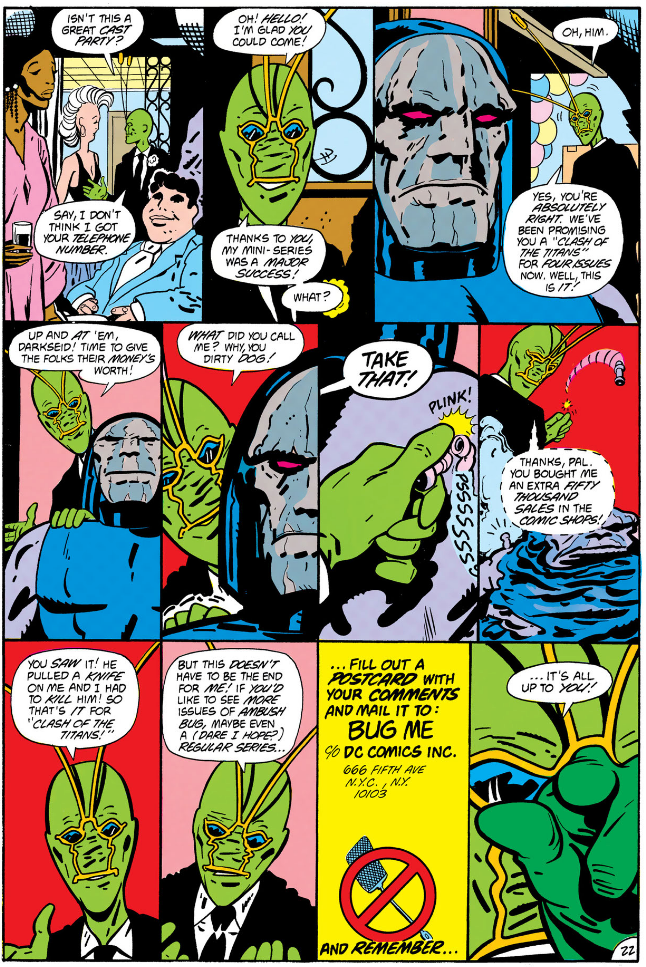 Amid all the rapid-fire gags, laments about the shifting nature of continuity and characterization also became a hallmark of Ambush Bug comics. When Ambush Bug came back in a six-issue miniseries in 2008, he took note at how first-person narrator captions have replaced thought balloons. The 2008 miniseries is concerned — albeit loosely — with the apparent murder of Jonni DC, but the narrative threads all fray under the onslaught of unrestrained goofiness. Later, readers come upon the title character as he’s shopping for kitchen appliances.

The refrigerator he’s looking at has a dead woman’s body in it. When the zany hero says he’d like to see other options for keeping his food fresh, the salesperson tells him they’re all like that.

It’s a cutting joke that indicts one of the worst tropes in latter-day comics-making (coined by Gail Simone) but it still manages to elicit a guilty chuckle. When Giffen, Fleming and crew litter the series with the bodies of dead characters, they’re making fun of the use of death as a sales tactic.

That’s the annoying power of Ambush Bug: the uncomfortable stare of a self-aware fiction that’s all too cognisant of a genre’s worst habits. When I read these comics in high school and college, I first fell in love with Ambush Bug’s big broad slapstick, classic vaudeville rhythms, and self-aware lampoons. But now that I’m older, I appreciate a different ingredient more.

These comics capture the energy of what happens when freelance creators get to cut loose. Ambush Bug stories are almost always a bunch of guys making fun of their boss — legendary editor Julie Schwartz at first, then Dan DiDio — their peers, and the whole loopy industry they managed to make careers in.

Some of the comedy in Ambush Bug might feel a little cringe-y now, but most of it doesn’t punch down. There’s a little bit of longing for how things used to be in Irwin Schwab’s stories, paired with a befuddlement as to how things are now. That mix of sentiments ain’t ever going out of style in superhero comics, and Ambush Bug should be grousing through every medium touched by the genre’s ever-growing influence.