Knights And Bikes: The Kotaku Review

Knights and Bikes follows two young girls growing up in the ’80s, but it’s not about a specific generation’s childhood as much as childhood in general. Its two young characters aren’t immune to the grim reality that swirls around their fantasy of heroes and monsters. It celebrates childhood without stumbling into nostalgia, and it’s earnestly fun while still examining all the ways children deal with the big, often scary world around them.

Knights and Bikes, out today on Steam and PS4, can be played co-op or solo. Two players, or one player switching off, control the game’s protagonists Demelza and Nessa, who are two young girls on a fictional English island called Penfurzy in the late 1980s.

Penfurzy is a seasonal tourist town whose main draw is the legend of an ancient hidden treasure. Searching for it cost Demelza’s mother her life. Penfurzy has fallen on hard times, forcing Demelza’s father to decide to sell the trailer park and minigolf course he owns. Demelza and Nessa set out to find the treasure themselves, hoping to use the riches to to save Demelza’s home. 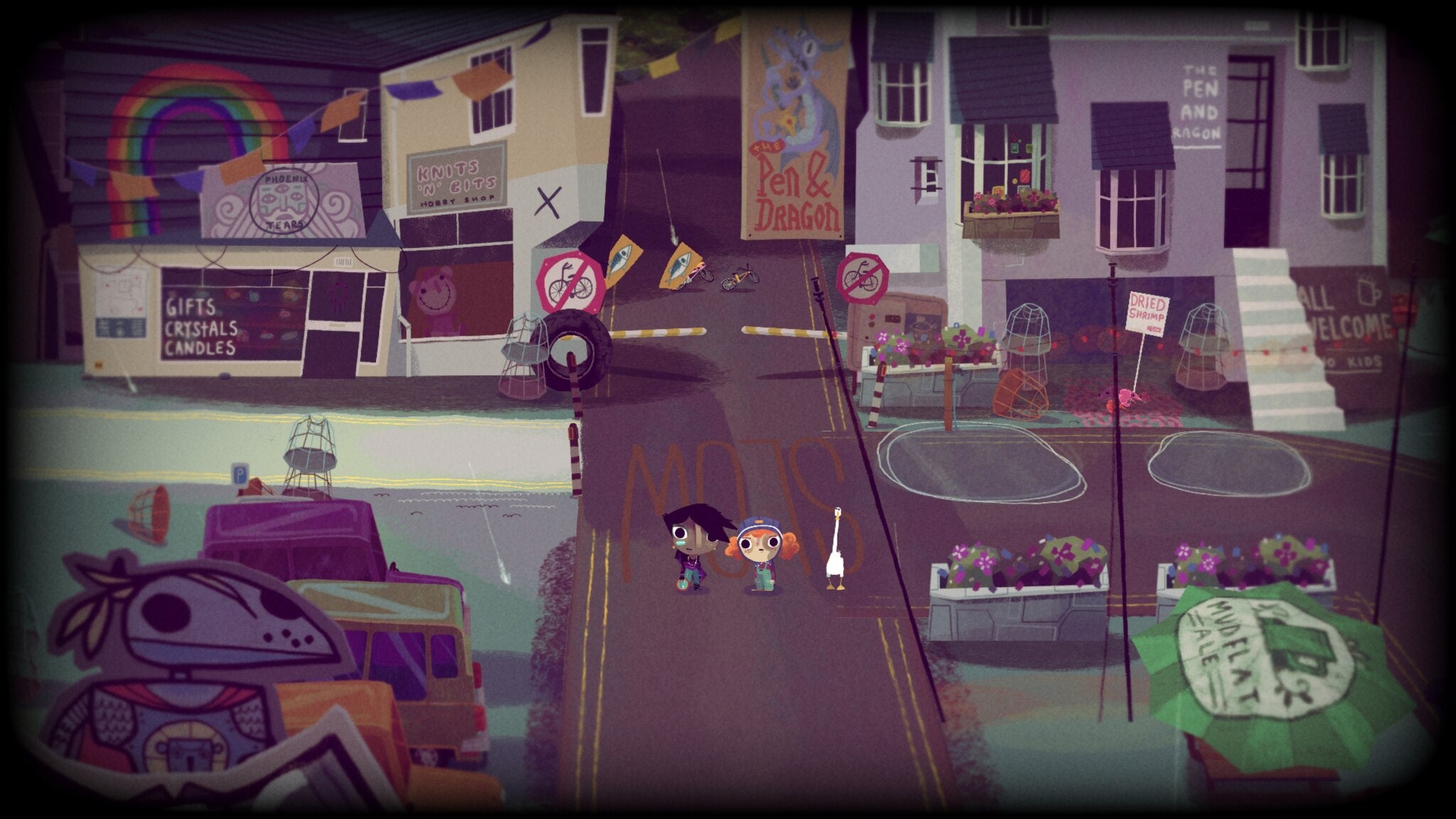 The treasure is guarded by monsters you have to fight using your abilities, though whether the enemies are real or just in the girls’ imagination is unclear. There are also puzzles the girls must solve together, unlocking gates and moving platforms as they journey across the island.

It grows less and less clear whether the treasure and the girls’ adventures are actually real, especially when they involve fighting island residents possessed by the curse that protects the treasure. While this mystery is part of the game’s story, it left me with some narrative questions. Why Nessa has come to Penfurzy is another question the game’s story asks, one that takes an end-game twist that blurs the line between reality and fantasy even more.

I played Knights and Bikes alone, but I can see how it would shine best in co-op. The friendship between the two girls would be most lively with two players fighting over a bike (delightfully, you start with just one) or playing soccer with an in-game ball. Playing alone, the AI-controlled character will engage in the game’s combat alongside you or eventually perform the requisite action to solve puzzles.

It works surprisingly well. There were only one or two times when the AI got stuck or didn’t behave the way I needed without some prodding. But playing alone was sometimes frustrating. At times I figured out how to solve a puzzle but had to wait for the computer to do its part. Other times the computer would set to solving the problem before I’d even teased it out.

It never ruined the experience, but, mechanically and emotionally, the game is so clearly meant for two players that it sometimes reminded me of being a loner kid, playing by myself while the other kids hung out together. 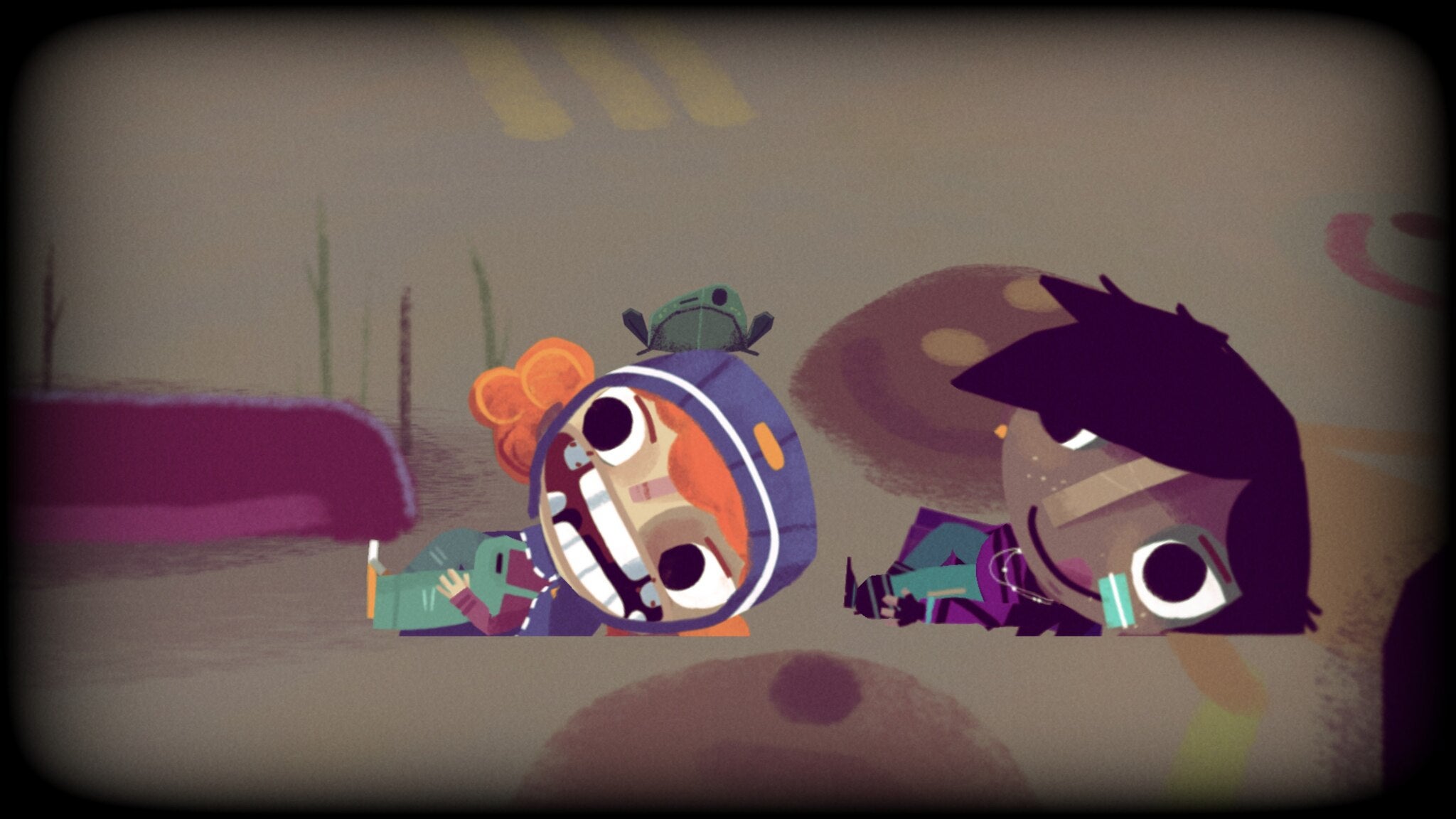 What if the Goonies were English?

Demelza and Nessa have different abilities, which they gain through the course of the story. They often need to use these abilities in tandem in order to progress. Demelza can splash and stomp in puddles, or on moving foes that pop up. Later, she finds a video game glove that lets her warp over obstacles. Nessa can throw frisbees and, later, use a boombox to repel fog and enemies.

Eventually, Nessa gets a bike too. You pedal with repeated button presses, which wonderfully recreates the effort involved in being a little kid riding a bike, even if mashing the button can get a little tiresome. Both on bikes and on foot, the girls move painfully slowly, which would probably be mitigated by having a friend to entertain you while you plod along. However, both your footspeed and effortful peddling make the game’s world feel big and the girls feel small, connecting you physically to the game’s premise.

Both bikes can be customised by spending the odds and ends you collect from bushes, enemies, and hidden chests. This detritus shows up in the world as glowing lights that you must scoop up. It’s somewhat tedious, but the collecting feels satisfying when you look at the drawings on the side of your screen showing what you’re actually collecting: stickers, bread clips, worms, and so on.

When you buy bike upgrades, the girls heap this pile of junk in front of the bike salesman. Why the salesman is willing to accept garbage in exchange for bike flags and handlebars is left to the player’s imagination. Necessary upgrades, like tires that can go through mud, are given to you for free, but it’s fun to change the colour and decoration of your bike. 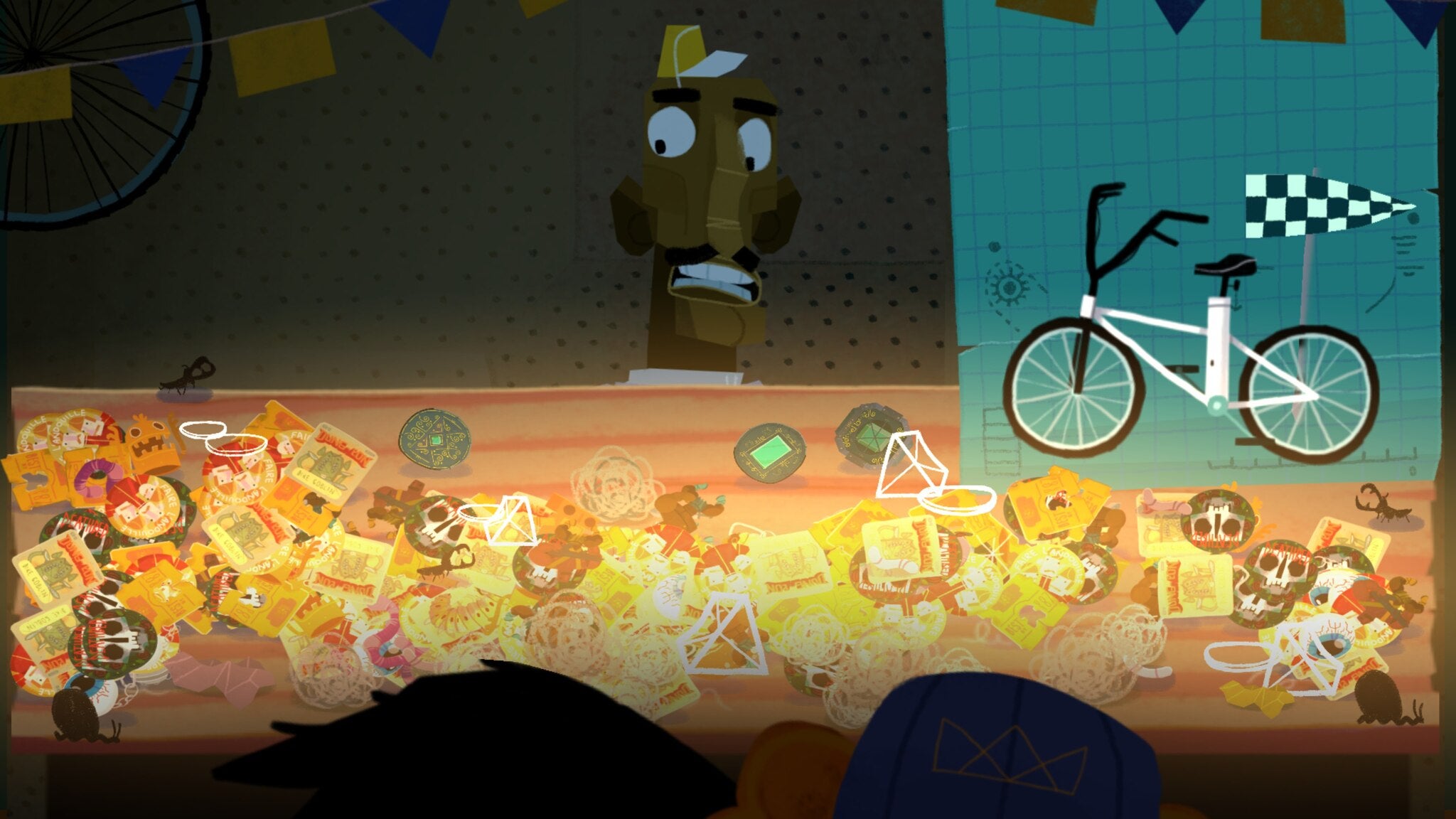 The girls’ decision to find the treasure and save Demelza’s home spirals into an island-spanning adventure that blurs the line between reality and fantasy. A trip to the waterfront to retrieve a library book shifts from learning about local businesses to fighting monsters in an abandoned amusement park. A trip to the junkyard goes from avoiding Demelza’s bully to a series of noisy, clanking puzzles involving machines and cars.

A late-game mountain climb feels treacherous and mysterious, with moving platform puzzles that can’t possibly be real but which nonetheless suck you into the sense the treasure is as powerful and magical as Demelza believes. The island feels huge, and your progress through the map is cleverly gated with mud the girls can’t yet bike through or doors they can’t open without new powers, making your journey really feel like progress.

Games about kids having imaginary adventures can be saccharine or grating, but Knights and Bikes largely succeeds. Fantasy and myth are woven into the history of Penfurzy, and Demelza’s enthusiasm for the knights and piskies that haunt the island is infectious. Along the way she also expounds on the island’s culture, like the best way to eat scones and pasties, or the stories behind local residents.

It all makes for a richly textured world that the game renders in a hand-drawn style accentuated with little details like flapping flags and circling birds. You learn the story of Penfurzy’s treasure through a series of minigolf holes, and it’s a wonderful blend of reality and fantasy that sucks you into the Demezla’s imagination as unstoppably as Nessa has been.

The power and the danger of imagination is at the heart of Knights and Bikes, and while I didn’t quite buy into the game’s final pronouncement on the matter, I was more emotionally invested in the game and its story than my own cynicism about childhood usually allows.

However, it’s not clear where the limits of the fantasy really are. The minigolf plotline, for example, ends with the girls destroying a bulldozer they imagine is monstrous; when the dust settles, they’ve somehow destroyed a very expensive piece of construction equipment without getting hurt.

Does Nessa have a magic boombox? Did the girls really fly? Knights and Bikes leaves the final question of what was real and what wasn’t unanswered. As the game progressed, the fantasy eventually took over. I came to miss the sense of play that earlier sections had captured so well through their skillful toying with imagination and truth.

Overall Knights and Bikes is charming and childish while almost never feeling cloying. The heroines learn a few capital-L Lessons at the end of the game that didn’t move me, seeming too much like the game trying to cram a broader message into what so often felt like a romp, but they didn’t detract from the sweetness and fun of the game. Things end very differently than they begin, and while I wanted the game to stick to its more grounded position, I found Knights and Bikes both fun and moving.

There are so many small, engaging moments: meeting the cool girl who runs the record shop, dressing up like a hay bale, Demelza admitting she draws worms on her mother’s grave to keep her company, how high-fiving gives you health. These moments stuck with me, making Knights and Bikes unexpectedly captivating and memorable.