The Internet Slang Meaning Of A Nintendo And GameFreak Proposed Trademark

The application was filed on June 7 of this year and, as Yahoo! News Japan explains, there probably won’t be a decision until year’s end. While the trademark is related to video games and trading cards.

Simultaneously, the Pokémon Company also filed trademarks for a bunch of other kanji characters, such as mizu (水) or “water” and honoo (炎) or “flame” (note: for Pokémon, that is translated as “fire”). So, the assumption is that the trademarks are for branding different Types (Water, Fire, Grass, etc) on various Pocket Monster related goods.

But…the grass kanji’s other meaning has been causing amusement online. Sans context, it’s the equivalent of filing a trademark for “LOL” or “LULZ.” Obviously, Nintendo and GameFreak are not trying to trademark that use. Still, it’s striking to see the filing. 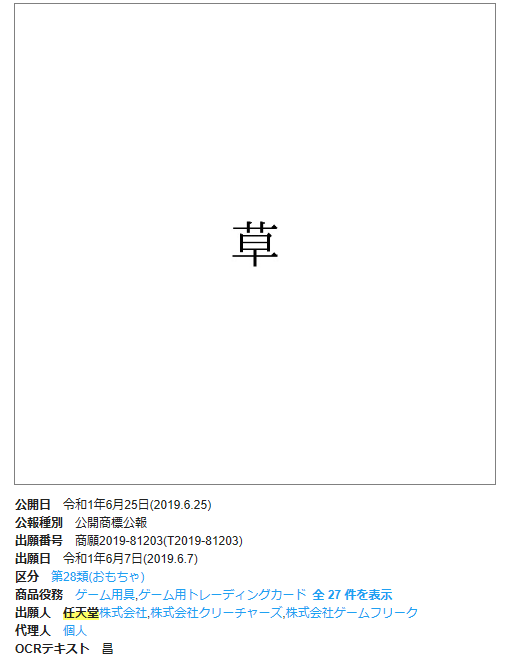 Writing the grass kanji kusa (草) is just one of the Japanese internet slang terms for laughing. To fully understand the meaning, it’s necessary to look at one of those other colloquialisms.

In Japanese, the word “laugh” is warai (笑い). Simply put, since that starts with a “w” when written in Roman letters, writing w’s has been a way to express laughter. If something is kind of funny, a few w’s will suffice (www). If something is hilarious, let out a string of the letter: wwwwwwwwwwwwwww.

Kusa is related because all those w’s look like a row of grass. So online, the slang term kusa (草, “grass”) and the phrase kusa haeru (草生える, “growing grass”) are directly related to those w’s. If something is funny online in Japan, people will write kusa or kusa haeru because the comment section will be filled with all those w’s.

Early on in 2ch thread about this proposed trademark, one commenter inevitably wrote kusa (草) because this is rather humorous! To which another commenter replied, “Lawsuit” in Japanese. And a commenter’s reply to that? Kusa. LOL!