The Nintendo Switch Lite Is A Pitch Perfect Remake

It’s fitting that the Nintendo Switch Lite launched the same day as a re-release of one of the best Zelda games of all time. The Switch line of consoles and the Zelda series of games feel inextricably linked. The original Switch is a remarkable and unusual piece of hardware unlike anything before it, and the Zelda game that launched alongside it, Breath of the Wild, is a remarkable and unusual as well. The Switch Lite and this year’s Zelda game, Link’s Awakening, are both beautiful, incredible remakes of previously existing and extraordinary pieces of work. You probably don’t need to buy Link’s Awakening if you’ve played it before — but you’ll enjoy it. If you already own a Switch, you don’t necessarily need the Switch Lite. But if you buy it, you’ll love it. 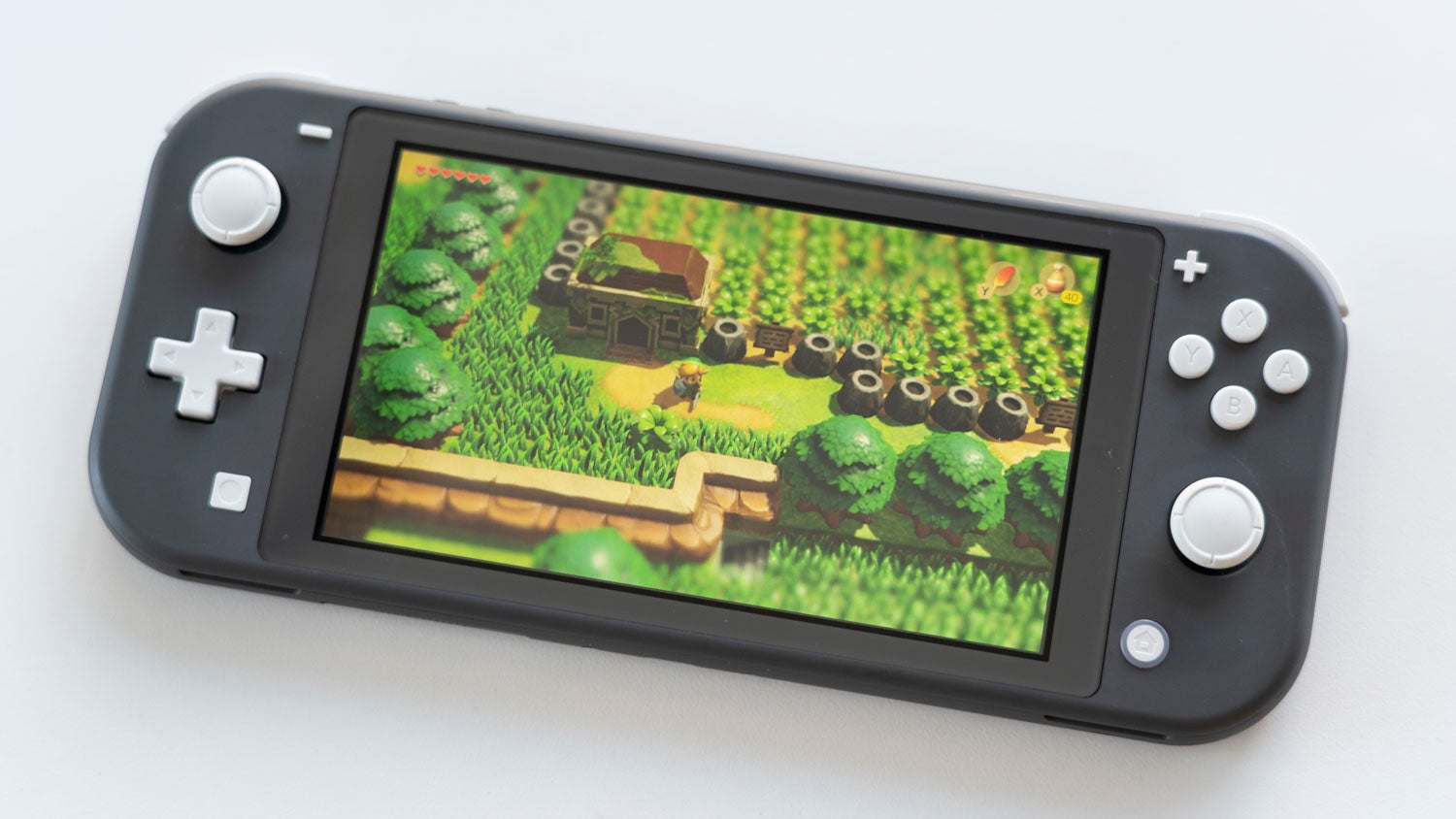 The more mobile-friendly version of the Switch.

It feels sturdy, the display is gorgeous, it's cheap and there's no creak!

It lacks some of the weird allure of the original device. Battery life on standby needs work.

In fact, I love the Switch Lite so much I might just force my brother to buy my original Switch off of me. The Switch Lite is absolutely a “lesser” version of the original Switch. You can’t plug it into your TV, and you can’t remove the controls to instantly do a head to head Smash Brothers match with a friend. The brightness on the display doesn’t automatically adjust, and there’s zero rumble when you get hit by bad guys in games. If you want the very best Switch experience, you should not buy the Switch Lite. You should buy the original Switch or the minor revision launched earlier this year (it’s supposedly slightly faster and has improved battery life).

I play my original Switch almost exclusively in its handheld mode — only tethering to the TV when I need to destroy people in Smash Brothers. So the new emphatically handheld Switch Lite kind of seemed like my dream machine on paper. In practice, it is, in fact, my dream machine (for the most part).

It’s smaller and lighter than the original Switch, and that will probably be the first thing you notice if you handle both devices. The original Switch and Joy-Cons weigh 398.03g. The Switch Lite weighs just 276.69g. A few people at the Gizmodo offices called it cheap as they handled it. People love to link the heftiness of a device to a sense of premium, so that’s expected criticism — even if they are all wrong.

The Switch Lite has a nice matte finish on its plastic surfaces that’s less fingerprint sensitive than the original Switch, and it lacks that terrible flex the Switch has. There’s no creak as you play games either. No sense that you could snap the whole thing in half with one sharp twist. Even the small series of vents on the top of the device seem sturdier and less prone to breakage than the same vents on the Switch. I feel like I can toss the Switch Light in my bag and not worry about it breaking like I do every time I travel with my Switch.

At 3.6 inches by 8.2 inches the Switch Lite is a lot smaller than the 4.02 inches by 12.23 inches Switch. That makes it much more portable, and between the size and weight, it is much easier to hold when I’m playing Fire Emblem for three hours straight. My hands never cramp playing marathon sessions with the Switch Lite as they do with the Switch. However, people with larger than average hands should be wary; a few of my coworkers found the controls too cramped for their hands.

The pretty significant reduction in size doesn’t mean a reduction in battery life, though. Nintendo shrunk the battery from 4310mAh to 3570mAh, but removing features like the rumble pack means the Switch Lite gets better battery life than the original Switch.

On average I saw about an hour more battery life, and in a battery test run by Tom’s Guide, in which they set each device to full brightness and played extended sessions of Smash Brothers, the Switch Lite lasted 3:50 hours. The original Switch lasted a paltry 2:45 hours. Admittedly both devices lost to a brand new Switch revision which has tweaks to battery and processor performance and lasts 4:50 hours in the test. 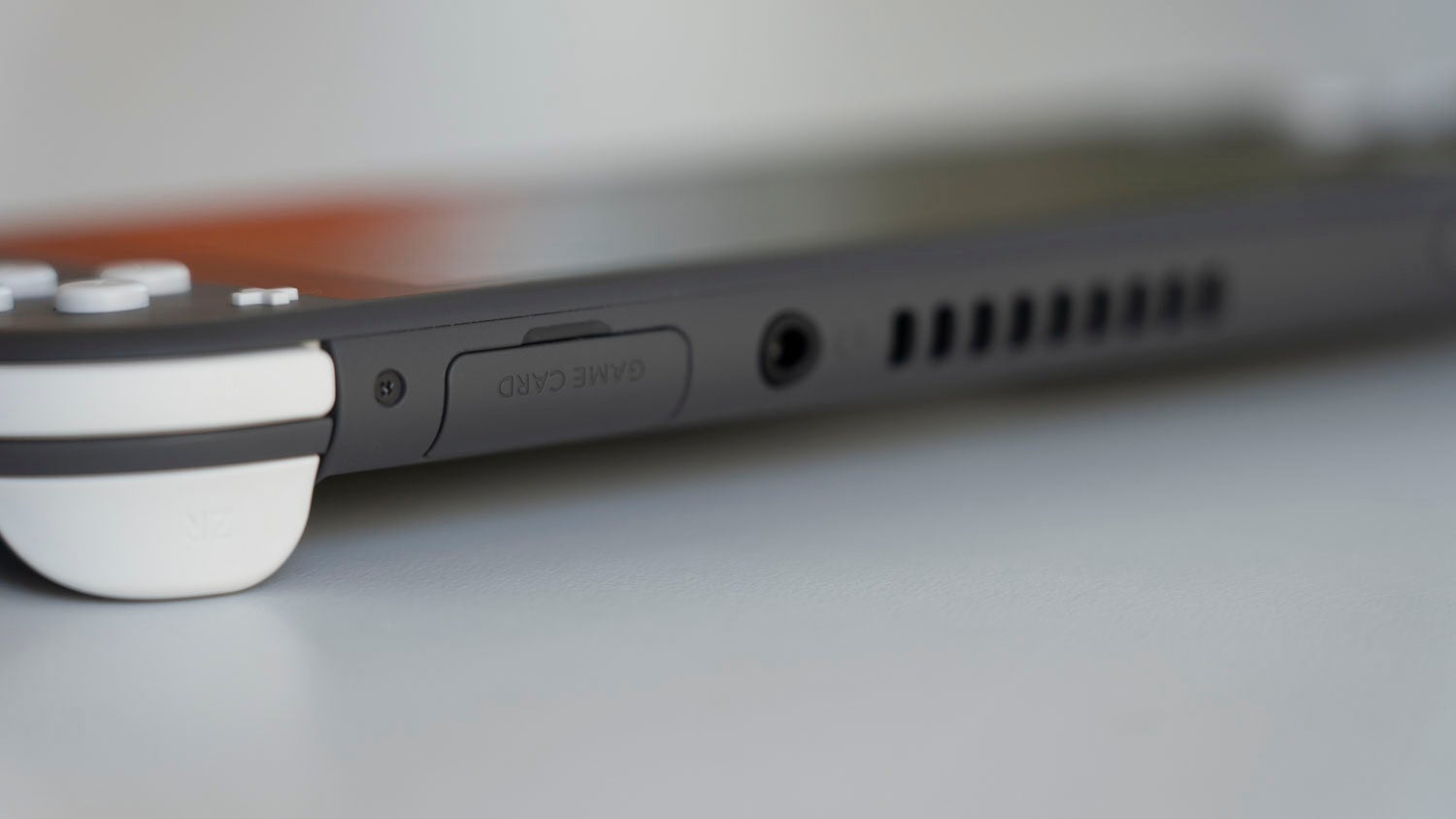 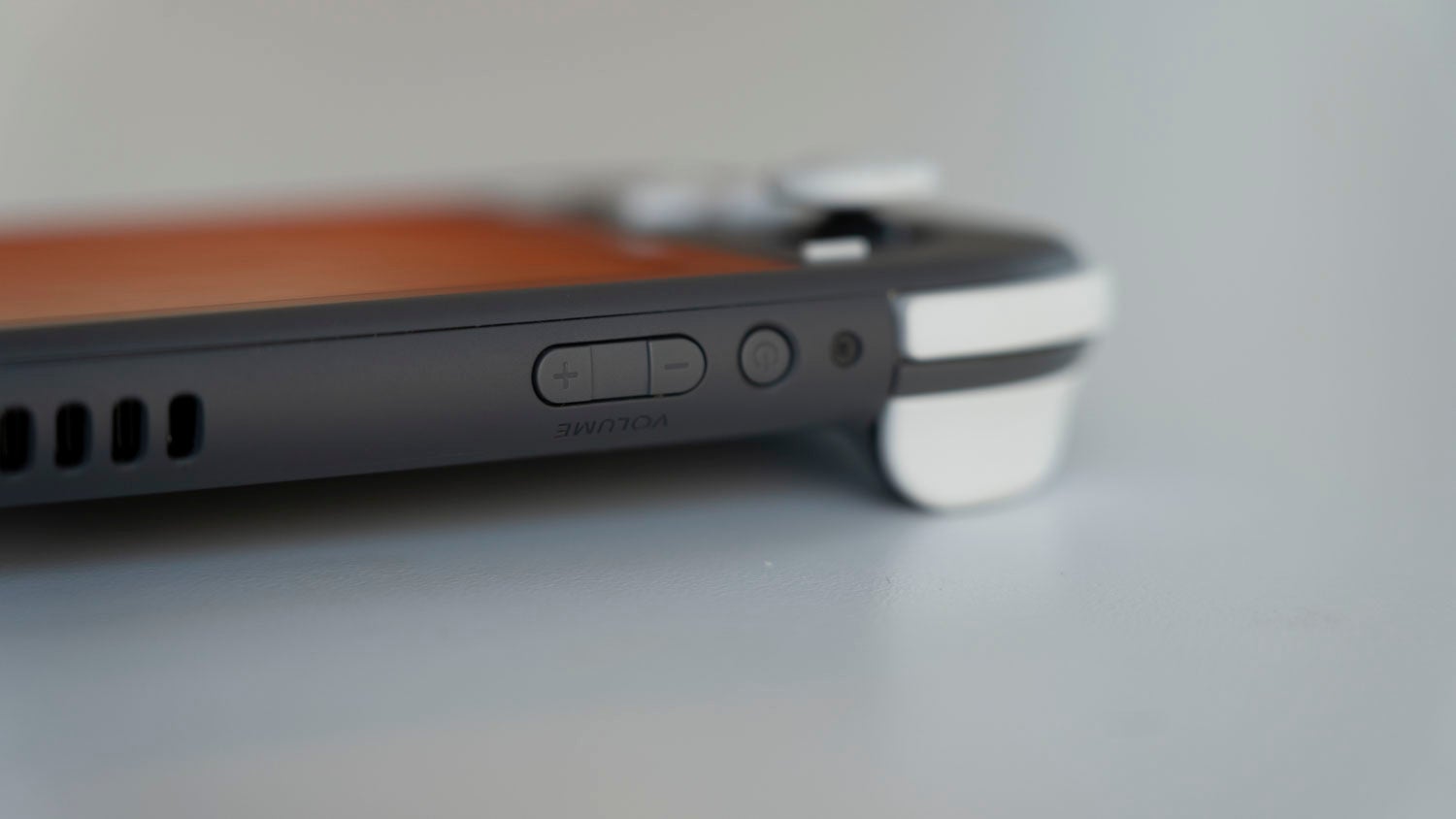 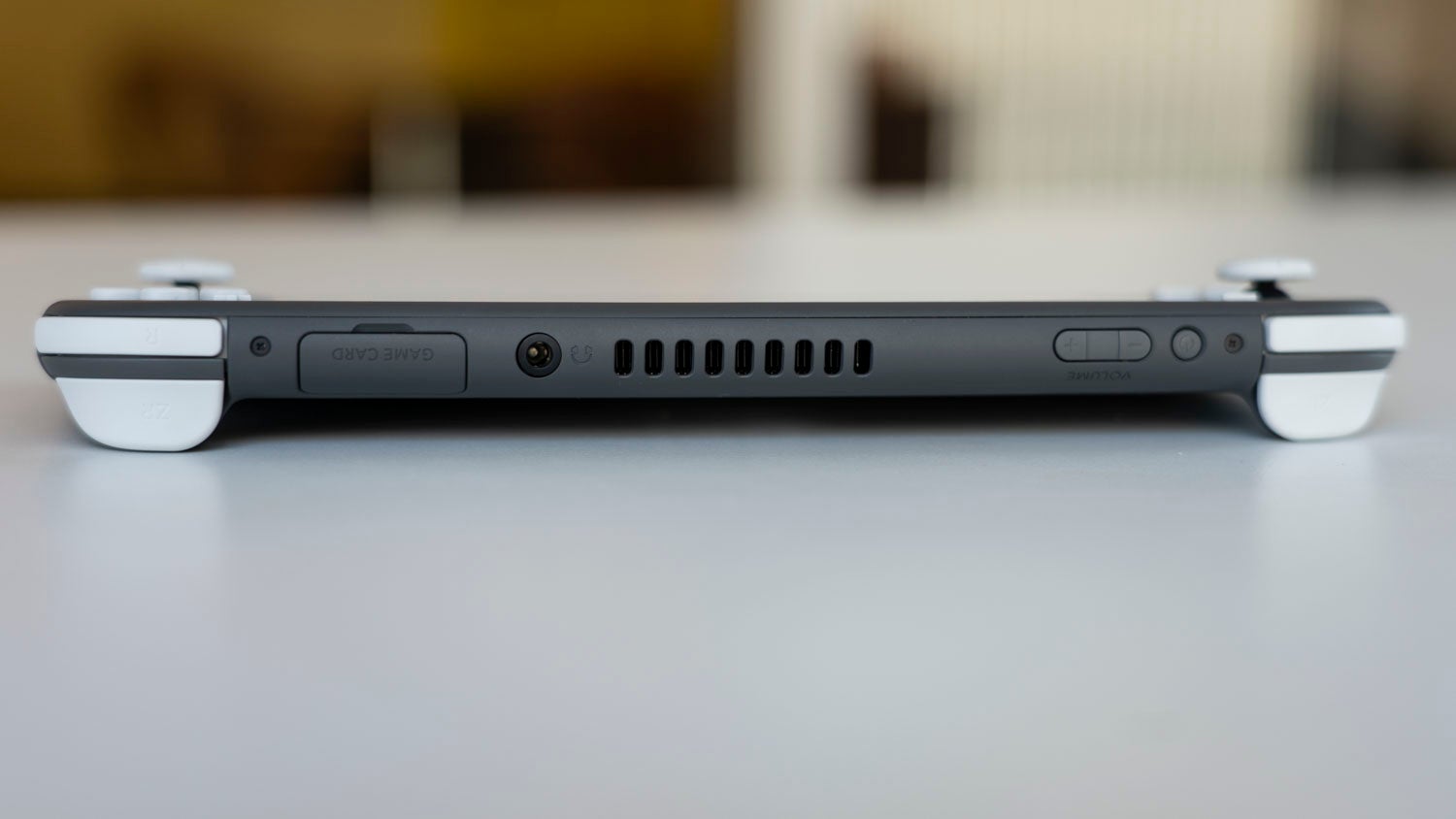 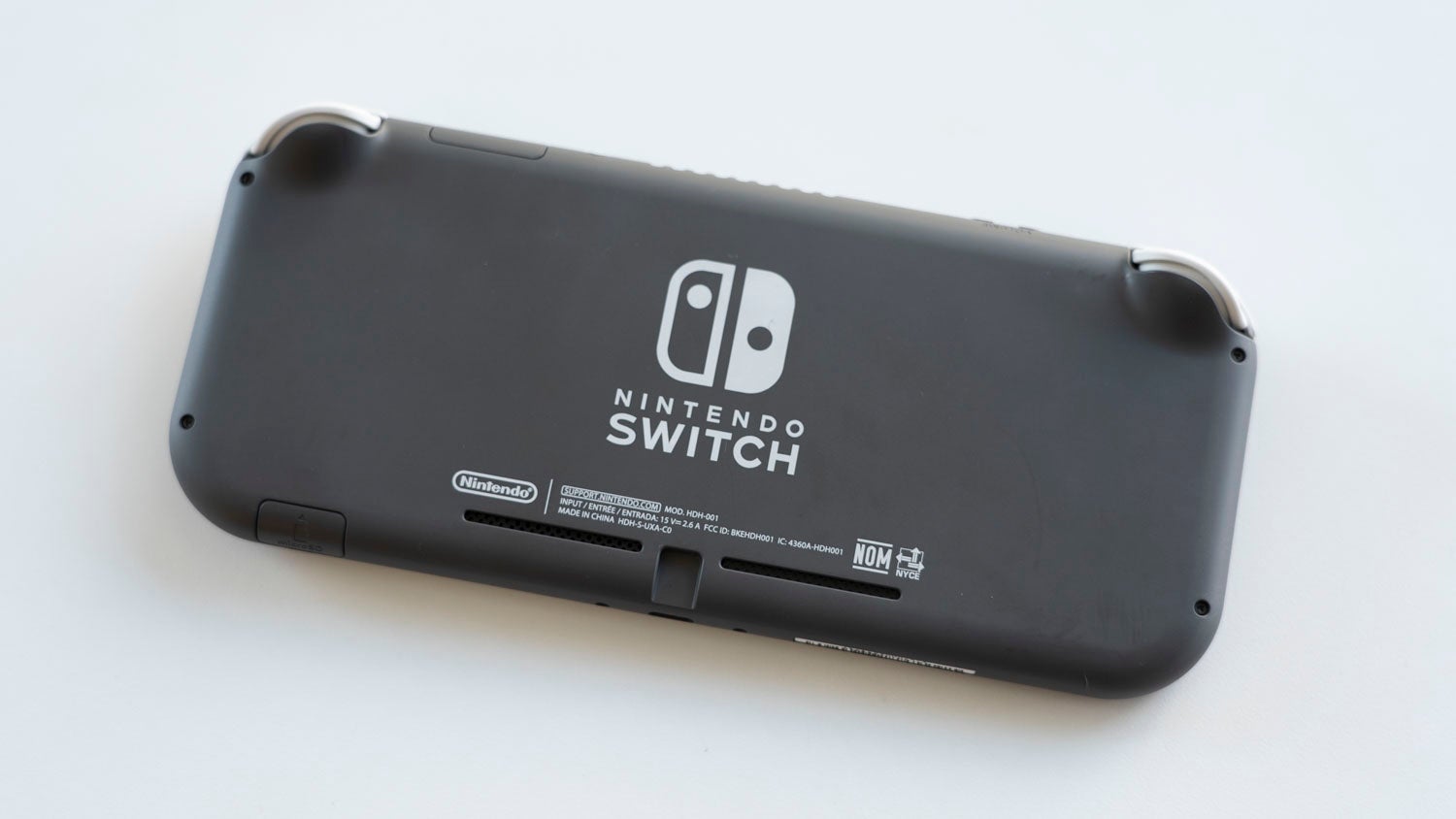 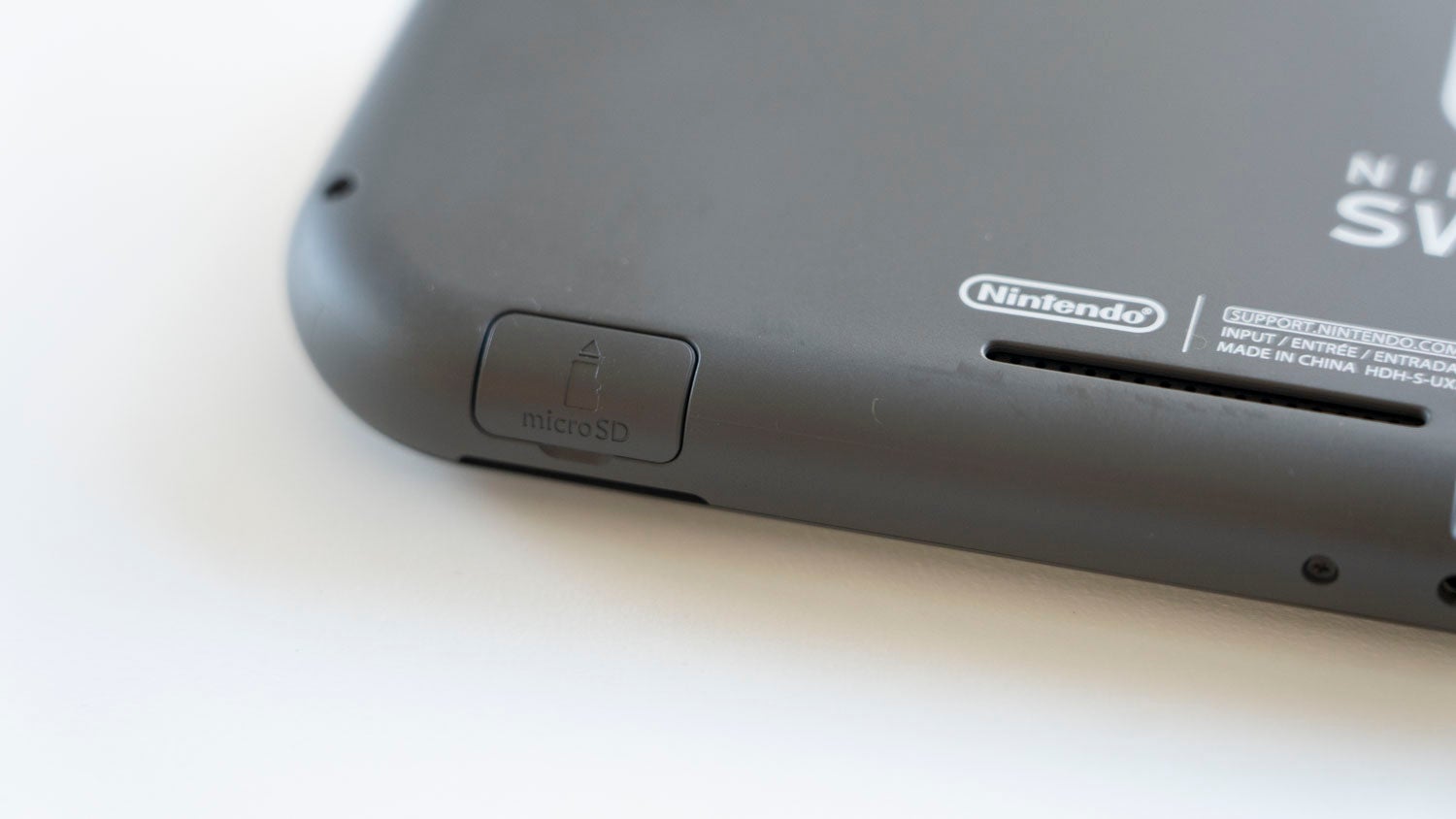 The battery life on standby leaves much to be desired though. There was a two day period where I devoted my spare time to my Kindle instead of the Switch Lite, and it dropped from 100-per cent battery to 71-per cent battery life in that time. So keep it plugged in when not in use, or plan to charge it before any trips.

A smaller device means a smaller display. It’s gone from 6.2 inches to 5.5 inches. The 720p resolution is the same, and in our testing, its max brightness was on par — both average 380 nits. Yet because the Switch Lite has the same resolution in a smaller display, things just look better. Higher pixel density means the picture appears sharper.

A larger number of pixels per inch means the display is more attractive to look at. (Photo: Alex Cranz, Gizmodo)

The original Switch’s 720p LCD felt far too cheap when compared to the wide range of high-resolution OLED phones on the market. It felt more like Baby’s First Tablet than a super cool gaming device. The Switch Lite hasn’t radically changed things, but the move from 237ppi to 267ppi is instantly noticeable and extremely welcome. Between it and the sturdiness of the console, the Switch Lite feels like a pricey upgrade despite being $100 cheaper.

Overall, I’m not concerned with the Switch Lite’s very minor issues. Do I wish I could dock it or have a rumble pack or have the brightness of the display automatically adjust? Absolutely. Yet as a handheld first Switch player, I’ll gladly give all those things up for a device that feels sturdier and looks nicer when I play it. That the Switch Lite is only around $300 also helps matters.

You’re not getting the full and magical Switch experience with the Switch Lite. The promise of a device that can move nimbly from the TV to your bag isn’t there. The Switch Lite isn’t for playing Smash Brothers tournaments at a friend’s house or 1-2-Switch at the bar. It isn’t for experiencing all the really weird and wild promise of the Joy-Cons.

It’s for curling up on the couch and disappearing into the world of some game for a few hours. For people who already own the Switch, it’s an unnecessary luxury, but for people who primarily play handheld, it should be a requirement. For people who haven’t invested in a Switch yet and want to see what the fuss is about, $300 Switch Lite is the perfect entry point.