Turn-Based Survival Game Overland Is Like An Indie Rock XCOM

In my couple of hours with turn-based survival game Overland, I’ve lived multiple short, doomed lives in the post-apocalypse. These lives unfolded in in gas stations and on street corners, and they were filled with the pursuit of gas cans and pieces of garbage, like potted plants and lighters. Overland’s art is minimalist, but the game feels stuffed with mournful personality.

Overland is a game by Finji, out today for PC, Switch, Xbox, PS4 and Apple Arcade. It takes place in a ravaged America beset by spiky monsters. They’re attracted to sound, and they call up reinforcements from underground when they’re injured or killed.

At the start of the game, you’re assigned a random survivor and a car that’s running low on gas. Each level is a diorama-esque grid that you move across, gathering supplies, fighting or avoiding monsters, and saving other survivors to add to your road trip across America.

In between turns, you choose a new location to go to from a sparse map. There might be survivors at one stop, who you can add to your party, or gas, or supplies like weapons or first aid kits. It costs different amounts of gas to get to these locations. Gas is hard to come by and was my most sought-after resource.

I stayed too long in places in pursuit of it, or made risky treks across levels to drop items in favour of gas cans, go back to my car to fill it up, and then return for my other loot. Once, when I didn’t have enough gas to get to a new location, I found myself dumped into a dark level full of monsters. I did not survive long.

The need for gas places a unique emphasis on your car. It’s the way you get from place to place, but it has more uses and presence than that. It can run over monsters, or be moved along the road to get closer to supplies or give your characters less far to walk. It also takes damage easily.

In one playthrough, a large monster battered my car too many times, and I had to hurry to get my survivors out of the vehicle as flames flickered from the hood. Between the enemy and scenery placement, I couldn’t get them all far enough away from the car. My car exploded, killing two of them and forcing the remaining two to try, unsuccessfully, to escape the level on foot. I haven’t yet discovered how far you can get on foot, though some levels have cars you can requisition. The car’s necessity and fragility makes it feel like another one of your companions rather than just a means to an end. 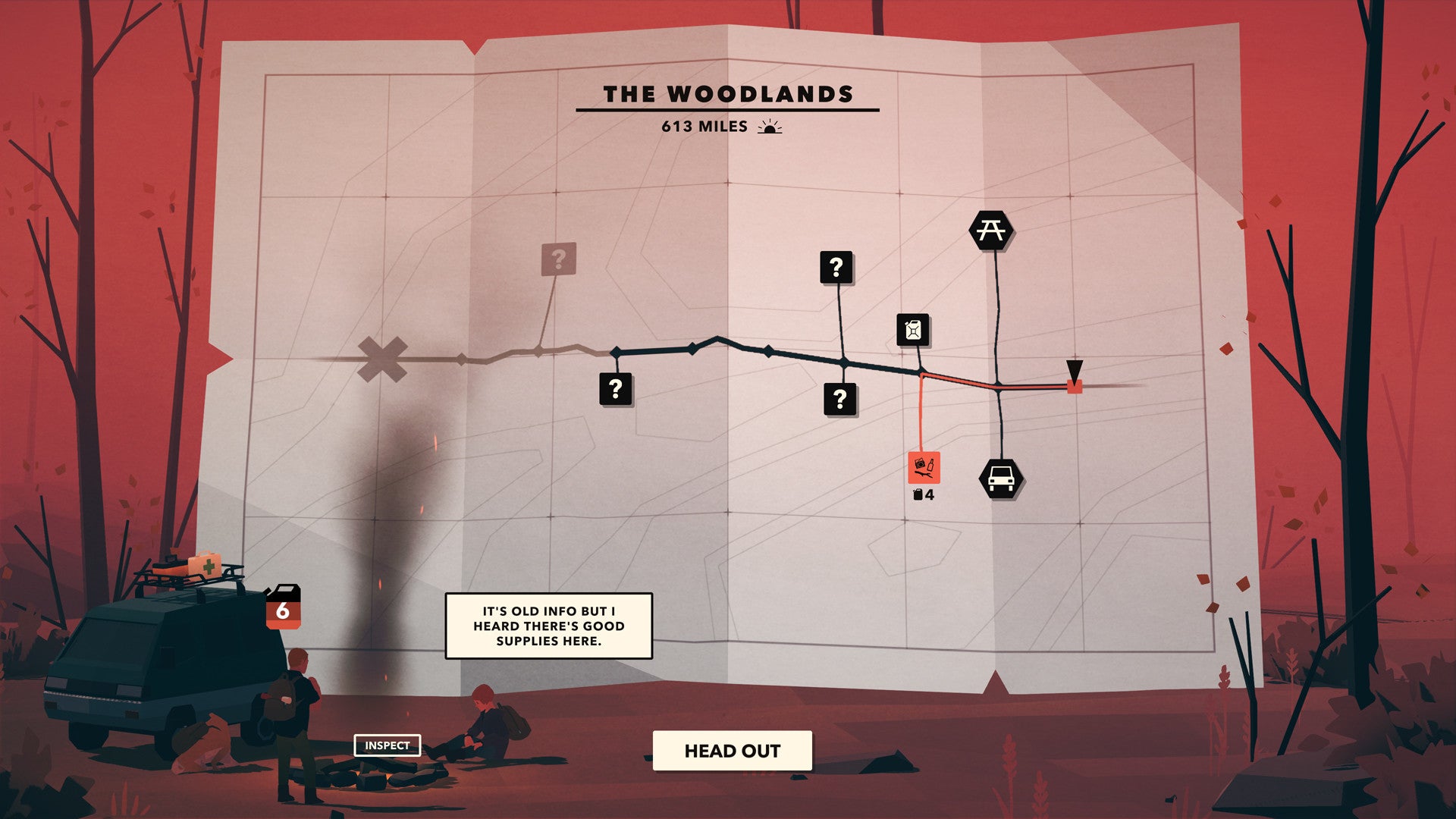 Overland is tough, but it’s also slow. Enemies aren’t as aggressive as they are in similar turn-based games like XCOM. You have time to avoid attacks, and enemies can often be killed in one strike. Also, the reinforcement monsters they call up take time to surface. Looting is also time-consuming, requiring you to move to a container, search it, and then fiddle with your inventory if need be. The car must be entered, then turned on, then driven.

Levels are broken up by brief cutscenes set to moody indie music where characters briefly talk and then you choose your next location. The game doesn’t need these scenes — it’d be more expedient just to take you back to your map — but the methodical pace of them adds to the mood. This slowness makes the game feel post-apocalyptic more than the monsters and lack of resources does. Crawling from place to place feels effortful and sad, a contrast to the bustle of daily life that no longer exists for the characters.

It makes the new world you find yourself in feel difficult, but also empty. There’s nothing to do anymore but survive, so you might as well take your time.

This emptiness is emphasised by your companions, who lack faces or much personality. They’re described in small blurbs with descriptors like “kind of into this” or “doesn’t understand what the big deal is.” I felt attached to them the way you’d feel about a stranger waiting in a long post office line with you; I didn’t care about them in a specific sense, but I cared that they were there.

Sometimes they’ll have backpacks, which let them carry more items, vital given your deeply limited inventory space. Other times they’ll have a positive or negative trait, like being able to throw things farther or making more noise when scavenging. Characters can be revived, but they’ll be injured, which results in limited actions per turn. Characters who were revived in their lives and described in a run’s final roundup as “ghosts,” lending a supernatural air to things. 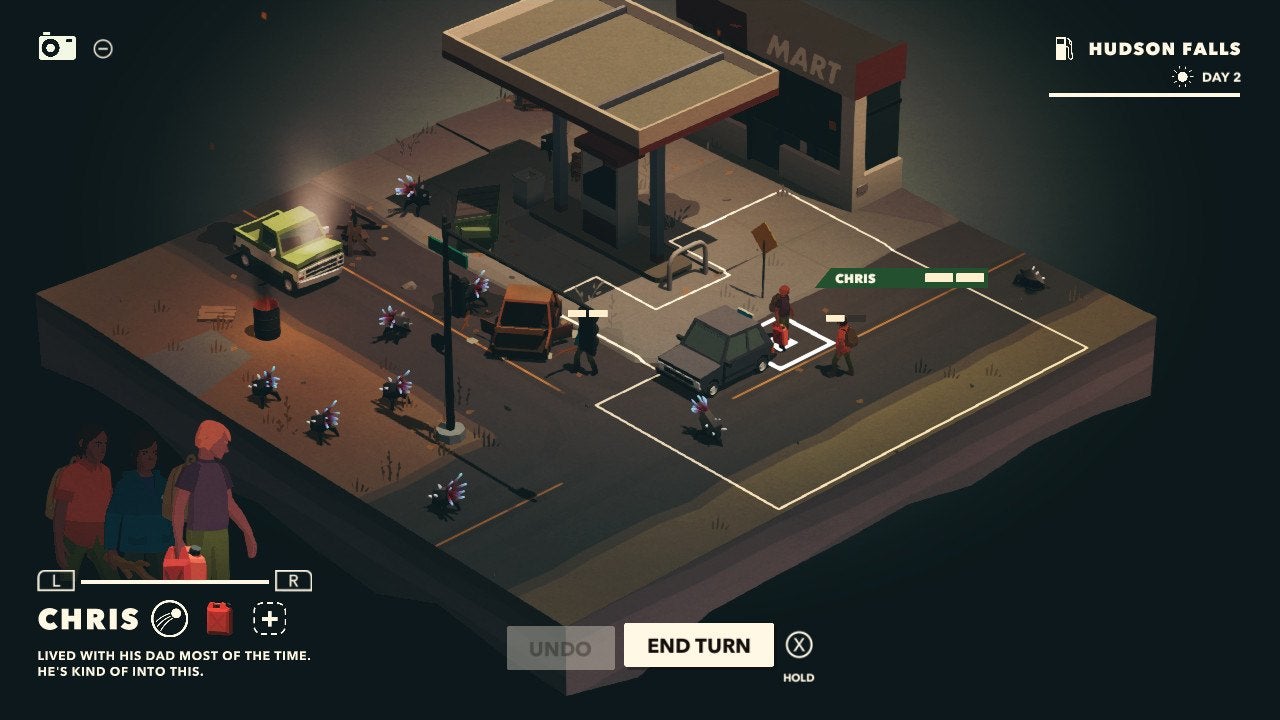 In one playthrough, my companions were two dogs. In a final standoff, my human character fell, followed by one of the dogs. Though the last dog stood no chance, he bravely killed several monsters before succumbing to the horde that surrounded him. It was, like many survival games, a small, doomed story that nevertheless felt grand in the moment, a whole life lived a world that just carried on through a new run.

The shoebox levels add to this sense of drama played out against a bigger, uncaring world. They’re chunks of landscape floating in space, similar to the visual layout of Into the Breach. This design makes areas feel isolated while also suggesting a whole world just beyond their borders. Levels can sometimes be hard to parse, especially if they’re dark, though you can zoom in and move the camera a bit.

I surprised myself by taking advantage of the game’s photo mode (I tend to hate photo modes) to zoom in and capture dramatic tableaux, as well as to explore a level a little more fully. Sometimes you can push and pull objects that you come across, or dump gasoline and then set things on fire, but by and large you can’t alter the layout you’ve been given. Objects like dumpsters and traffic barriers are familiar to everyday life, but their placement and limited interactivity in this game makes them feel imposing.

I’ve only played a couple of hours of Overland, but I’m excited to explore the game more. Judging from the menu, there are seven areas to pass through; you can start from new ones if you unlock them by clearing the road of debris at the end of each section. I’m currently making my way through the Woodlands, the second level, which has an autumnal colour palate and bigger monsters than the starting East Coast area.

I don’t know what else awaits me on the road, though my map has hinted at traders who might want the potted plants and books I’ve clung to. I’m curious to see what they’ll give me in exchange.