What You Need To Know About The Black Knight, Kit Harington’s Side-Step From Game Of Thrones To The MCU 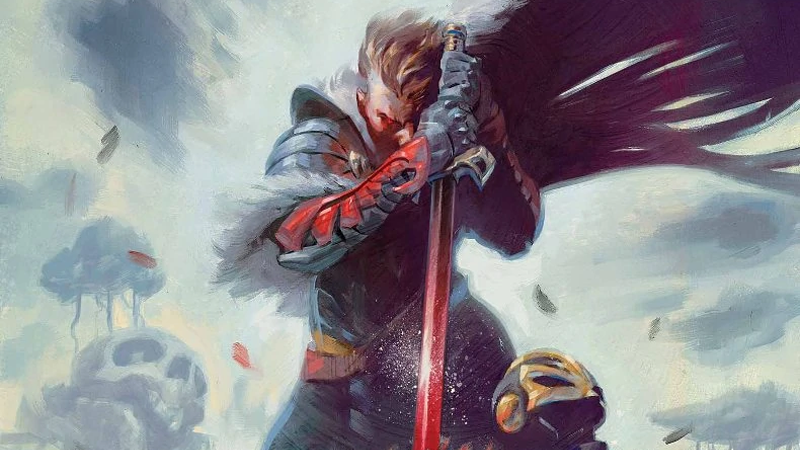 The fact that Marvel is making an Eternals movie is just one of the absurdest things in their already incredibly absurd slate of upcoming projects. But somehow at D23 they managed to make it just a touch weirder, by announcing that Game of Thrones’ Kit Harington had joined the film as one of the obscurest Marvel heroes around: the Black Knight.

Created by Stan Lee and Joe Maneely in 1955, the Black Knight’s legacy stretches back deep into the roots of Marvel’s history — in fact, back to a time when Marvel was not yet Marvel, but Atlas Comics, itself a rebranding of the progenitor publisher that birthed the industry titan, Timely Comics.

Timely’s rebranding into Atlas came in the waning days of the Golden Age of superhero comics. Although characters like Namor the Sub-Mariner, the Human Torch and Captain America had huge popularity at the height of the second world war, by the early 1950s superhero comics were on their way out.

To combat the dwindling successes of its superpowered output, Timely became Atlas, and diversified its genre offerings to stretch behind superheroes and into the realms of the supernatural and horror, to romance and crime, to westerns and spy-fi, and yes, to tales of Medieval chivalry. That is where the first incarnation of the Black Knight, Sir Percy of Scandia, comes in. 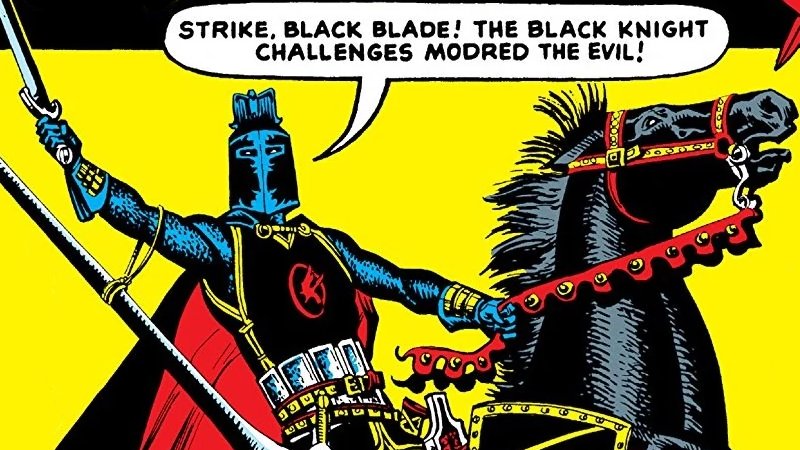 Sir Percy, star of his own brief comic series, was a member of King Arthur’s court, and a legendary Knight of the Round Table. While he wasn’t exactly a superhero like Lee’s more famous creations, Percy wasn’t just a knight in shining armour either: he wielded a magical sword, the Ebony Blade, forged by Merlin himself out of a meteorite. When wielding the blade, Percy — who otherwise pretends to be an incompetent buffoon to maintain his secret — becomes the Black Knight, with the sword and armour he wore granting him invulnerability to everything but weaponry made from the same material as the Ebony Blade.

Which, unsurprisingly, is how Percy is ultimately done in: his long time archnemesis, King Arthur’s villainous nephew Mordred, stabs Percy with a blade cut from the same meteorite that forged the Ebony Blade, mortally wounding him during the fall of Camelot. After learning of Percy’s death, Merlin casts an enchantment that ensures Percy’s legacy as the Black Knight will live on, tying his spirit to the Ebony Blade so, should Mordred ever return, Percy could guide his descendants in battling him.

You Know Nothing, Dane Whitman

For a time, that’s basically what happened in the Black Knight’s genre-hopping, publisher-evolving legacy. Although the Black Knight series ended after just five issues, the character was revived by Lee, now working with Dick Ayers, in 1964. This time, now in Marvel’s name, the Black Knight was no longer a chivalric Medieval hero: they were a supervillain named Nathan Garrett who fought Iron Man and Captain America.

Garrett, a biologist turned spy, uncovers Sir Percy’s tomb — and the fact that he is actually a direct descendant of the knight — and the Ebony Blade in modern Europe, fleeing the custody of Hank Pym. Sir Percy’s spirit finds Garrett unworthy of wielding the blade, however, so to spite his ancestor, Garret builds a litany of medieval-themed gadgets and weapons, as well as armour and even a flying horse, to adopt Sir Percy’s Black Knight persona for a life of crime. 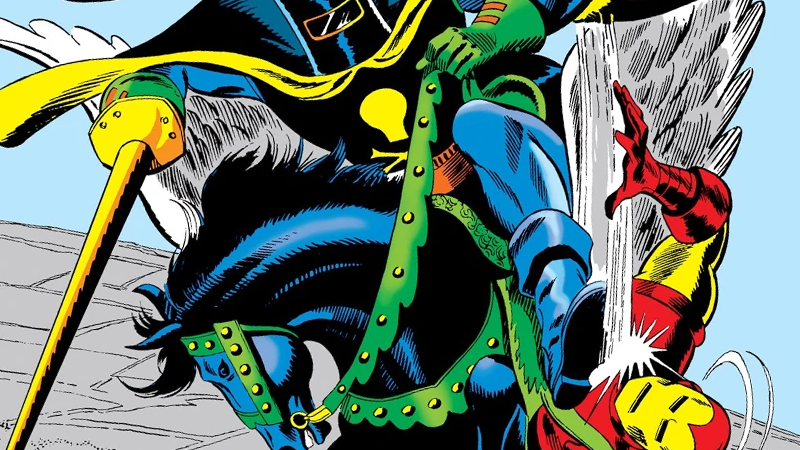 As the Black Knight, Garret joined the Masters of Evil and became a regular thorn in the side of the Avengers and Iron Man in particular, before falling from his horse in battle against the Iron Avenger and being mortally wounded by the drop.

As he lay dying, Garrett recanted his life of crime and revealed the true legacy of the Black Knight and the Ebony Blade to his nephew, a physicist named Dane Whitman, asking Dane to redeem the Black Knight’s mantle and wield the sword he couldn’t. Dane would indeed redeem the Black Knight persona, not just becoming a superhero, but a card-carrying member of the Avengers team his uncle had fought so many times — after using the confusion over his uncle’s identity to infiltrate and expose the Masters of Evil.

Over the course of the late ‘60s and ‘70s, Dane had a wild career beyond being one of Earth’s mightiest. He travelled across time to fight Kang the Conqueror, he joined the Defenders and promptly got petrified by the Enchantress, turned to stone. He even had his soul wrenched back into the 12th century in the process of said petrification, where he hung out for a while and occasionally teamed up with time-travelling heroes until his petrified body was restored in the present.

Upon his return, Dane discovered the Ebony Blade has not only grown in power — now able cut through basically any substance, deflect energy, and even absorb mystical energy — it was infected with a powerful blood curse, slowly corrupting wielders of the Blade before they become bloodthirsty killers, using the sword to feed the curse.

Dane was forced to free Sir Percy’s spirit from the weapon forever to lift the blood curse, but the curse returned when noted arsehole, King of Atlantis, and occasional superhero, Namor, swiped the Ebony Blade from out of Dane’s protection and used it to kill his wife Marrina, who’d been transformed into a soulless monster. The curse began corrupting Dane, physically and spiritually, requiring the return of Sir Percy’s soul (with a little help from Doctor Strange) to destroy the curse once and for all and save Dane’s life.

It’s after all this that Dane returns to the Avengers — and actually becomes one of its most important figures, a de-facto leader in Captain America’s absence — that his connection to the Eternals is revealed. Because, it’s at this time that Dane strikes up a romantic relationship with Sersi, played by Gemma Chan in the upcoming movie… and things get really complicated.

If it wasn’t complicated, it wouldn’t be the Eternals!

Long story made… well, a little bit less longer: an alternate reality version of Dane, operating under the name Proctor, plans to wipe every single version of Sersi across the multiverse out for being from a reality where she turned him down. Ikaris, one of Sersi’s Eternal allies — and played by Harington’s onetime Thrones co-star, Richard Madden, in the new movie — attempts to save Sersi’s damaged psyche from Proctor’s machinations by connecting her and Dane’s spirits together in an Eternal process called the Gann Josin.

The problem is, the bond doesn’t quite work because Dane’s beginning to get the hots for another of his superheroic colleagues, the very-much-married Princess Crystal of the Inhumans. Sersi ultimately snaps, going evil for a bit and even using the spiritual bond Ikaris gave her and Dane to turn him into her unwilling accomplice. 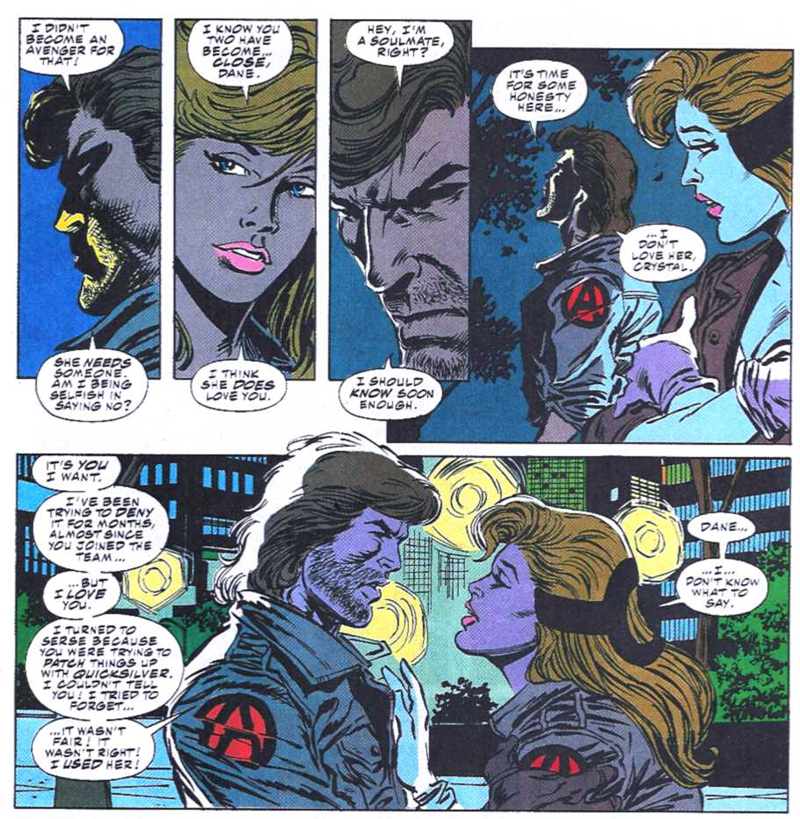 Dane doesn’t take too kindly to the Gann Josin process getting in the way of his adultery attempt in Avengers #361. (Image: Steve Epting, Tom Palmer and Bill Oakley, Marvel Comics)

Being asked to fight Crystal breaks the bond between Dane long enough for the Eternals to save both him and Sersi — who promptly kills Proctor with his own version of the Ebony Blade — but the trauma of Proctor’s machinations is so much that Sersi is forced to retreat to limbo between layers of the multiverse to recover.

Dane decided to join her out of shared guilt for her trauma and also because he doesn’t want to commit some Inhuman adultery. The duo travelled through the multiverse together for a time, and at one point even found themselves back in the 12th century where Dane had found himself spiritually flung to previously.

After hanging out there for a bit, Sersi felt ready to return to the present day and opened up a portal to the 20th century. Only… just Dane returned to the present, his bond with her permanently severed, while Sersi mysteriously vanished.

Oh, and Dane also finds out that most of the Avengers had just been murdered by Onslaught, but, that’s a story for another time.

All you need to know right now is that Sersi is likely going to be the connection that ties Kit Harington’s Dane into the world of the Eternals movie — just how much of that will be beyond the romantic relationship they had in the comics remains to be seen.

As weird as the idea of this movie is already, it’s perhaps unlikely that the absurd story behind Dane and Sersi’s relationship in the comics will be translated to the silver screen. But beyond that Eternals connection, Dane and the legacy of the Black Knight represent an opportunity to put a slightly different mystical spotlight on the weirder corners of the Marvel Universe.

Doctor Strange brought magic to the MCU in a big way, but it was a specific way, intricately tied into the tale of the Infinity Stones and of more eastern-inspired magic. Dane’s connection to western fantasy and medieval history represents a different side to that kind of mysticism, one that no doubt we’ll scratch a teeny surface of when The Eternals hits theatres in November 2020.