Humans do lots of inadvisable things in public for attention (see: hot dog eating contests, “the worm”). There is, though, a fine line between inoffensively asserting your existence and setting a bad example by putting yourself at risk. This is the debate at the heart of record-setting. Right now, Twitch streamer Andrew “GiantWaffle” Bodine is attempting to break the record for most hours streamed in a month: 570.

Bodine, 26, is living on three and a half hours of sleep a night and streaming games on Twitch 19 hours a day. “I’ve had to adjust the rest of my off-stream life to a minimum,” Bodine told Kotaku over email. “I trained for about three months to get my circadian rhythm adjusted to the new schedule.”

Currently, he has streamed for 192 hours and has 20 days left. 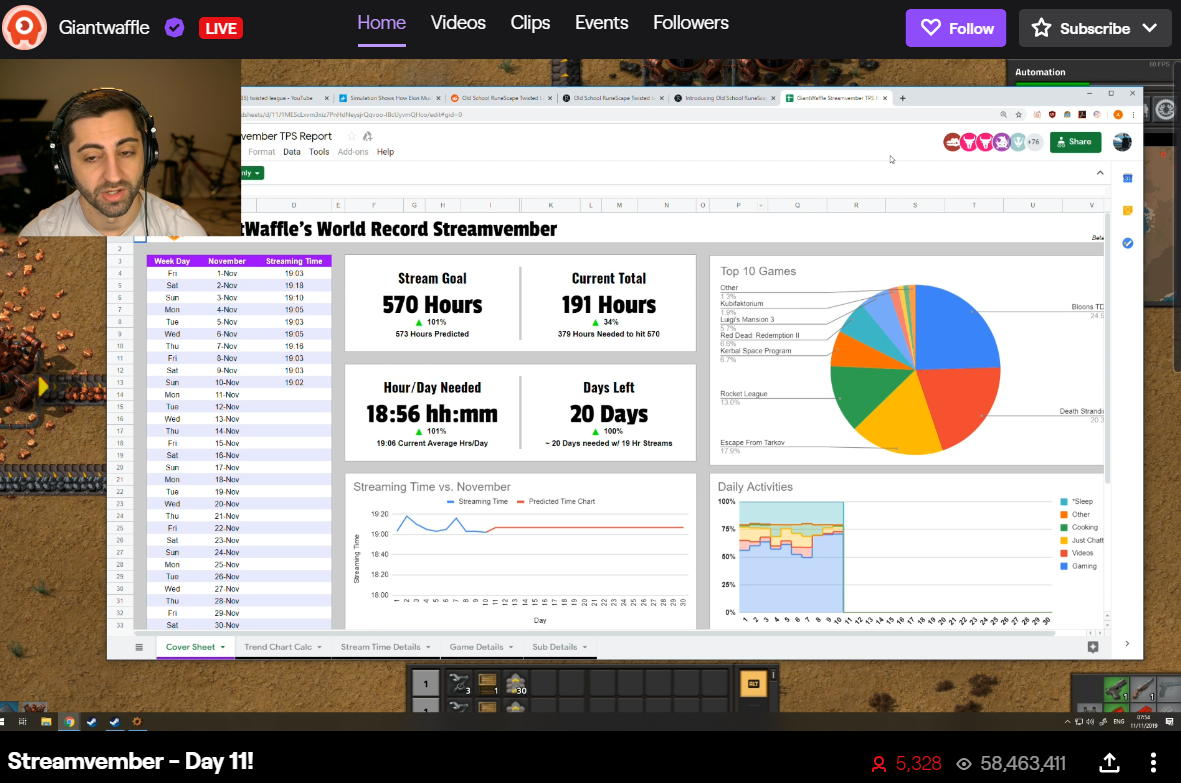 Oh no, you might scoff, this poor guy has to play video games all day and night! How awful! Yet for years, Twitch streamers have struggled to keep themselves healthy while making a career off the largely unregulated streaming platform.

Megapopular Twitch streamer Ben “Professor Broman” Bowman put it best in an essay on Polygon: “The only one who can turn the camera off is the person who benefits the most from keeping it on,” he said, adding, that there are 168 hours in every week and he is expected to be streaming for as many of them as possible.

Even Tyler “Ninja” Blevins, who is considered the most successful streamer, has expressed how scared he is of taking time off. In the hour he spent in a New York Times interview in 2018, Blevins estimated he’d lost 200 or 300 subscribers. He said, “The longest vacation I’ve ever taken was my honeymoon, and that was like six days. And that was devastating. It was a calculated risk.”

This mentality easily devolves into more blatant disregard for streamers’ physical and mental health. In 2017, one streamer died during a 24-hour marathon stream. After another streamer, Joe Marino, almost died, he wrote in an essay for Kotaku:

18-hour days were the norm. I could start to feel it getting to me psychologically and physically. It’s really hard to be “on” all day. People do not want to see someone grumpy or raging all the time when they visit your stream. You kind of feel like you must perform for them so they will want to stick around. This lead to me faking it most days. Your mind and body cannot keep that up for too long without consequences.

I got here because I was trying so hard to make it on Twitch. It is a literal grind. For you to succeed, you need to spend most of your time streaming. Streaming is hard. You have to sit there and not move. Say you busted your arse all day to get 400–500 viewers and you need to go pee. What happens is people don’t have long attention spans, so when you get up, you will 100% lose a portion of your audience.

Why would someone do this? Marathon streaming means more hours spent online, and more hours spent online means more viewer opportunities across different timezones. Bodine says that putting his body at risk like this “is 100% worth it in my eyes. Viewership goes through the roof for the entirety of the month. Currently I’m averaging 4 to 10 times my normal statistics such as: viewer hours, unique visitors, subscribers.” It’s true—according to his TwitchTracker stats, Bodine averaged about 2,500 viewers in July. Now, that number has spiked to 6,000.

Streaming stunts are also pretty common because they don’t fall outside Twitch’s community guidelines. Twitch doesn’t have regulations against unhealthy streaming habits on their platforms in part because, although streamers make a living on the platform and work full-time, Twitch is not considered an employer. Although its community guidelines prohibit “self-destructive behaviour,” including illegal drug use, distracted driving, and physically dangerous stunts, there is no mention of marathon streaming.

Streaming is labour, and outside of record-breaking stunts, streamers are grinding on Twitch in a bold effort to make a full-time living gaming. These stunts aren’t isolated from the full-time livestreaming mentality; they simply take it to the extreme. That’s what makes them so dangerous not just to do but to broadcast.

“Streaming 19 hours a day isn’t healthy,” said Bodine over email. “It’s very obvious and I’m well aware of it. But when put into perspective, a lot of people trying to break records push themselves to the limit in ways that are not seen as healthy. It’s not easy. It was never meant to be easy.”

Bodine rationalises his decision by noting that he’s made positive lifestyle changes to accommodate the extra strain: dieting, exercising. He said, “These changes are beneficial and honestly I feel healthier and happier than ever.”