Ghost Trick Has One Of The Catchiest OSTs On The 3DS 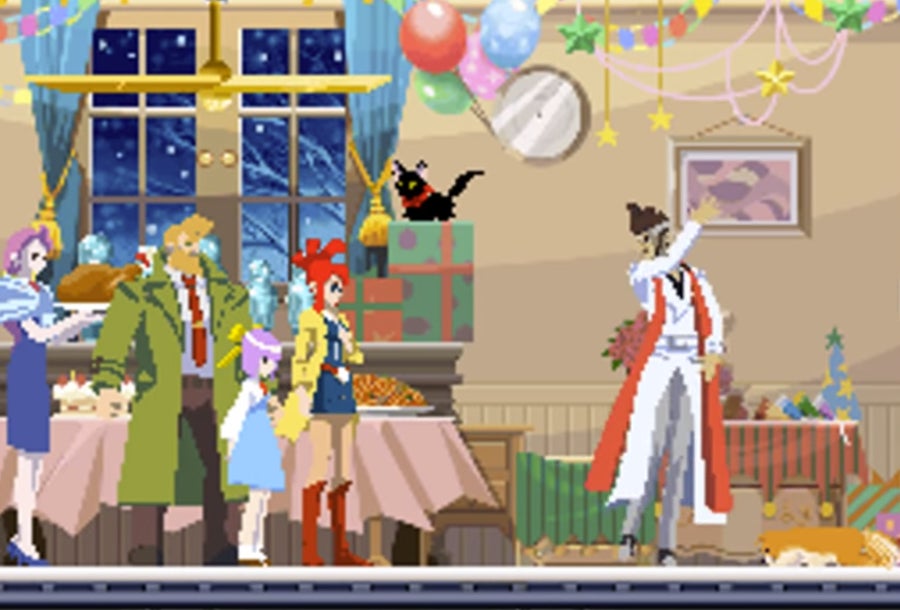 Ghost Trick was one of my favourite games on the DS. A big part of what made it so good was the amazing music.


The whole concept behind Ghost Trick is making ghostly possessions a game mechanic. That meant every object in an area was either a potential tool to be manipulated or a method of transit. Interesting characters, witty dialogue, and vibrant visuals made it an instant classic for me. But the thing that’s stuck with me most is the soundtrack. I still listen to it all the time, whether it’s when I’m writing, working out, doing chores, or just chilling. So I was pretty excited to get the chance to speak with the game’s composer, Masakazu Sugimori.

Sugimori began composing music when he was in high school after he was given the assignment of composing a tune. “I composed all the tunes on behalf of all the other students in the class,” he fondly remembered. He entered Capcom after graduating from vocational school and worked on games like Viewtiful Joe and Phoenix Wright: Ace Attorney. He left Capcom in 2007 to create a new company, Design Wave, where he worked on Ghost Trick as a contractor.

“Before the start of the production of the game (Ghost Trick), the director, Mr. Takumi, gave me a picture of the garbage dump from the beginning of the game. I was inspired by the drawing and composed two tunes, which I then gave to him. One of those became the main theme.”

The main theme is one of the most recognisable songs in Ghost Trick and the opening scene is one of the most pivotal. The protagonist, Sissel, wakes up in the junkyard, has no memories, and realises he’s been murdered. Sissel’s journey in driven by his desire to figure out why.

Inspiration can come from a variety of places, and in the case of Ghost Trick’s music, Sugimori stated it was “a small oil painting beside me. It was drawn in blue and black, a picture showing the night air which inspired me a lot… I don’t know the name of the artist, though, as I bought it from a street painter in front of the Osaka City Museum of Fine Arts long time ago. “

There were some challenges composing for portable game devices, some of which had to do with “producing bass sounds. You had difficulty hearing bass and kick drum sounds,” Sugimori stated. “I used some tricks to make the bass sounds from the GBA and DS easier to listen to. For example, I raised the octave to be higher on bass sounds, but if you just do that, when playing the game using headphones or earphones, the bass sounds too loud. So I had a hard time adjusting it. And of course, there were problems with the capacities of ROM and RAM.”

One of the tracks I listen to all the time is “A Dashing Enigma” which has some great percussion beats. It helps create an atmosphere of mystery while spurring players on to solve the puzzle at hand with catchy rhythms.

I asked Sugimori about his approach to composing. “I’m the type of artist who first imagines the song in my head, then turns it into music. So when I begin producing a tune, 90% of the work is actually done. It’s like baking a decorated cake. I don’t pile up the layers from the bottom to the top. I bake cross sections to create all the layers from the side at once. The 10% I don’t imagine in my head beforehand is something I think of as akin to decorational chocolate on the cake.

I used to have a very hard time making this ‘tune in the head’ take actual form. I took great pains with the composition and it took time. Now that I’ve grown as a composer and composing tools have progressed as well, I’m able to do it much faster and correctly than I used to. But I know I’m still learning…and this learning won’t end till I die. (lol)”

Sugimori’s taste in music is varied and as he states, he has “too many favourite composers and too many favourite tunes. When I was very young until my junior high days, I only listened to classical music as my parents forced me to. I hated that and fought against it, yet I still love J.S.Bach, Pachelbel, Dvořák, and Elgar. In junior high and high school, I listened to J-pop like B’z, TM network, and American bands like Genesis (Phil Collins days), Chicago (Peter Cetera days), Heart, Starship, and British bands like ASIA. I really liked the rock and pop music of the late 70s to 80s.

I was especially influenced by TM network and Tetuya Komuro of TM. In my high school days and professional school days, my CD collection included Japanese fusion bands like T-Square. I wanted to work in game industry and was inspired by Mr. Kouichi Sugiyama of Dragon Quest, Nobuo Uematu of Final Fantasy, Mr. Kouta Kato and Mr. Koujirou Nakayama of Banshee’s Last Cry.

If it had not been for Banshee’s Last Cry, there would not have been the music for Phoenix Wright: Ace Attorney.” Sugimori said it was “after entering Capcom that my seniors inspired me to listen to Jazz and Fusion, which influenced some tunes for Phoenix Wright and Ghost Trick. Now, I listen to every kind of music so I can’t answer who or which in particular.”

The jazz tones are part of what make both Ghost Trick and the Phoenix Wright scores stand out so much.

Sugimori is still busy composing music for several different games, including the two he’s currently working on. The first is Dragon Ball Heroes: “This was originally an arcade game started some 9 years ago. I’ve composed almost all the tunes for this game series. Now the game has accumulated more than 500 tunes. By the way, I hear that the game was ported overseas for the first time in the series as Super DragonBall Heroes. Since it was originally composed for the arcade, the volume and sound pressure were set to be high. I was worried that the BGM volume is too loud (I’m not on the Switch version staff). I’m curious how fans are reacting to this game outside of Japan.”

The other game he’s working on is Murder by Numbers which was recently announced in Europe. “This game is special for me because this is the first time I was offered a job from overseas (Britain). At present, it is announced that the game is for Steam. Murder by Numbers will be released next year, so I can’t say much about it now, but I think it’s OK to tell you I very much enjoyed composing for the game. I’d love to continue working not only in Japan but overseas… Feeling that way, I’m composing every day at the studio.”

When I asked about general advice for aspiring composers, Sugimori talked about the trends in games: “It’s becoming more and more common for games to have multiple composers. This can be a positive thing in that each composer can concentrate on the genre they’re good at. But I think there are some disadvantages to this way of composing. First off, aside from the section leader, who creates the world vision for the music, each composer creates ‘the material,’ not ‘the world.’

This doesn’t always train composers to have their own perspective and worldview. The worker who is good only at making screws can’t construct an entire aeroplane (though high quality screws are essential in making planes). Second, the individual composer can’t call the music their own ‘opus’. Chances are, Indie games might be able to solve these problems. I think it would be a good idea to create an indie game if you want to be a game composer. Because if you experience it, you can learn ‘how to make an aeroplane.’ And you can get a game that you can call a ‘representative work.’

These will surely be useful for your future work. I was very lucky. Of course we have to work hard, but we need luck, too. I am enormously grateful that I was able to get the opportunities I did thank to those who hired me; Mr. Takumi, Mr. Kamiya, Capcom, and many others more senior than myself. I wish the people who want to work in the game industry great luck.”