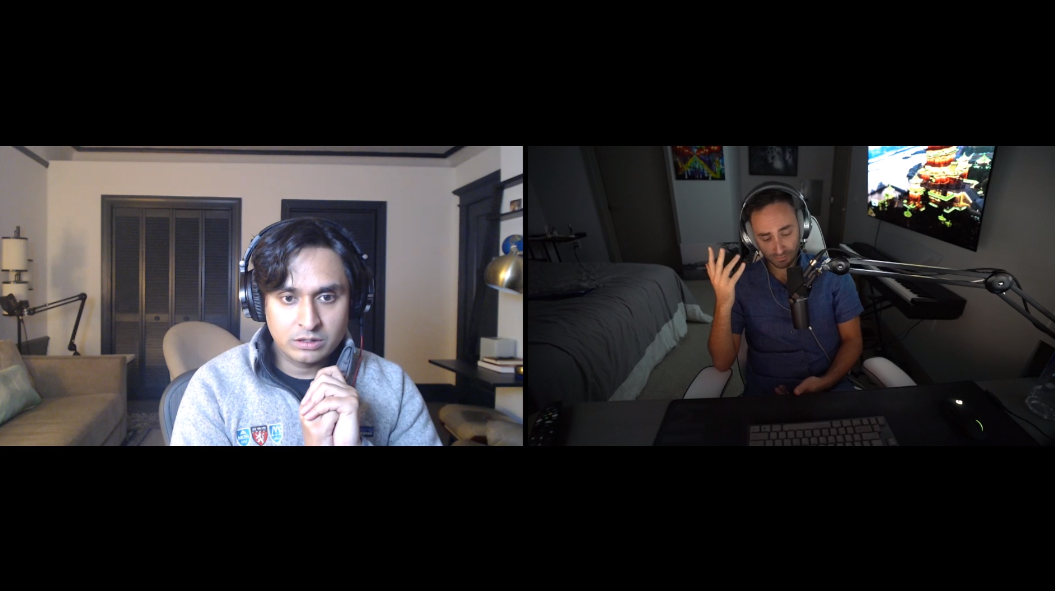 Everyone could benefit from therapy, especially streamers. While popular streamer Byron “Reckful” Bernstein’s on-stream conversation with Dr. Alok Kanojia was not an officially designated counseling session, it resembled one at times.

Bernstein is a former top World of Warcraft player and current streamer who’s now working on his own online game, Everland. Over the years, he’s been fairly public about his mental health. On Twitter, he’s said that he has both depression and bipolar, and he’s taken breaks from streaming during low moments. Earlier this week, after “a bunch of people in his chat” told him to give it a shot, he decided to go on the stream of psychiatrist Dr. Alok Kanojia in hopes of discussing depression. Kanojia’s Twitch profile describes him as a psychiatrist whose training includes work at Harvard Medical School, McLean Hospital, and Massachusetts General Hospital. He streams discussions focused on mental health and meditation, regularly dispensing advice to his viewers and sometimes to other streamers as well. He also notes that he does “not provide medical services or professional counseling online” and his Twitch and Discord community, Healthy Gamer, “is not a substitute for professional medical care.” Kanojia describes himself as a firm believer in both “cutting-edge neurochemistry research” and “eastern meditative techniques,” and with Bernstein, he hoped to demonstrate the power of the latter.

During the stream, the two delved into Bernstein’s history. In front of an audience that peaked at over 10,000 concurrent viewers (likely totalling out to well over that number when all was said and done), Bernstein said that he’s been diagnosed with bipolar II, and that when he was six, his then-21-year-old brother committed suicide. He talked about his own suicide attempt later in life, as well. He also discussed details of his treatment history, including specific drugs and their effects on him. He mentioned that only one drug in particular ever really put a muzzle on negative “thought loops” and other issues he suffers from. After a round of questioning that revealed all of this, Kanojia said that he hoped to give Bernstein some meditation techniques that would cultivate that feeling sans medication.

But first, more questions. The two proceeded to have a lengthy discussion that dipped in and out of Bernstein’s childhood. Kanojia focused on trying to divine the root of Bernstein’s depression; while he believes that the struggle with mental illnesses like depression is lifelong for many, he thinks that getting to the root of it can help people have a “transformative experience”—something he said he’s witnessed in people in his own psychiatric practice. This fed into a discussion of why Bernstein has found purpose in creating Everland as opposed to other pursuits. Kanojia asked Bernstein what’s different about making this game.

“I like that I’m trying to give people something I wanted as a kid,” replied Bernstein.

“Who’s the focus on?” asked Kanojia. “Who are you thinking about?”

For a moment, Bernstein was at a loss for words. Then he burst into tears and said, “People who have experienced what I did.”

Later, Bernstein wept again when faced with the idea that he had a very “pure” purpose when he was a kid; he just wanted to play games and be as good at them as his brothers. The loss of that purpose, said Kanojia, is what drives Bernstein’s depression.

Kanojia said that Bernstein is doing that by creating Everland, by making a game for kids like him—or, taking it one step further, the child version of himself.

Then the two used some meditation techniques, focusing on controlled breathing while alternatively blocking different sides of their noses. Bernstein said he felt “loose and happy and good” following them.

While the session seemed to have some benefits for Bernstein, elements of it were questionable. Kanojia drilled down to what he perceived to be Bernstein’s central issue with startling rapidity and made prescriptive statements about where and how Bernstein might find tidy relief. He did all of this in front of a sizable audience, rather than in private. Kanojia maintains that he does not offer counseling online, but the stream felt like a fast-forwarded version of therapy sessions I’ve attended, and both Bernstein and his audience were listening at least in part because of Kanojia’s credentials as a psychiatrist. That could have any number of repercussions, for example changing the nature of Kanojia or Bernstein’s comments into something more performative, pressuring them to put a bow on tangled subjects that require weeks’ or months’ worth of nuance to fully unravel, or giving bad actors in Bernstein’s nearly one-million-strong audience—who he’s said have tried to convince him to take his own life in the past—additional ammo.

Kotaku reached out to Kanojia to learn more about the rationale underlying his streamed discussions, but he did not reply as of this publishing. Bernstein, however, told Kotaku that he’s happy he participated, and he feels like it’s good to show audiences what grappling with trauma can look like.

“Felt healthy to me to cry,” Bernstein told Kotaku in an email. “I feel better having opened up. Now I have nothing to hide, nothing to worry about, everything is out there. Woke up today feeling more whole.”

Bernstein said that he’s received psychiatric treatment in “the last few years,” including with therapists who were open to alternative approaches like psilocybin, a psychedelic that occurs in mushrooms and that the FDA recently designated as a “breakthrough therapy.” The talk with Kanojia, he said, was good for him in other ways.

“It helps to hear my thoughts affirmed about what is important to my life,” he said, while also noting that Kanojia does not call it therapy “for legal reasons” and, as a result, he’s not calling it therapy either (however, he did call it “therapy” in his stream’s title). “I don’t know if I realised I’m making Everland for the six year old me who had no family to play games with. That makes me cry just typing it now. In a strange way, [it] feels especially powerful from a complete stranger who was talking to me for just a few hours.”

Bernstein now plans to upload the conversation to YouTube in hopes that it can serve as an example for others in his shoes.

“Dr. Kanojia confirmed he is comfortable with the conversation posted on YouTube, so my editor will be putting it up in the morning on the reckfulTV channel,” Bernstein said. “Should be helpful to many others. Several influencers reached out to me saying they were crying while watching thinking about their own trauma.”