Last Window Is One Of The Best Murder Mysteries In Gaming 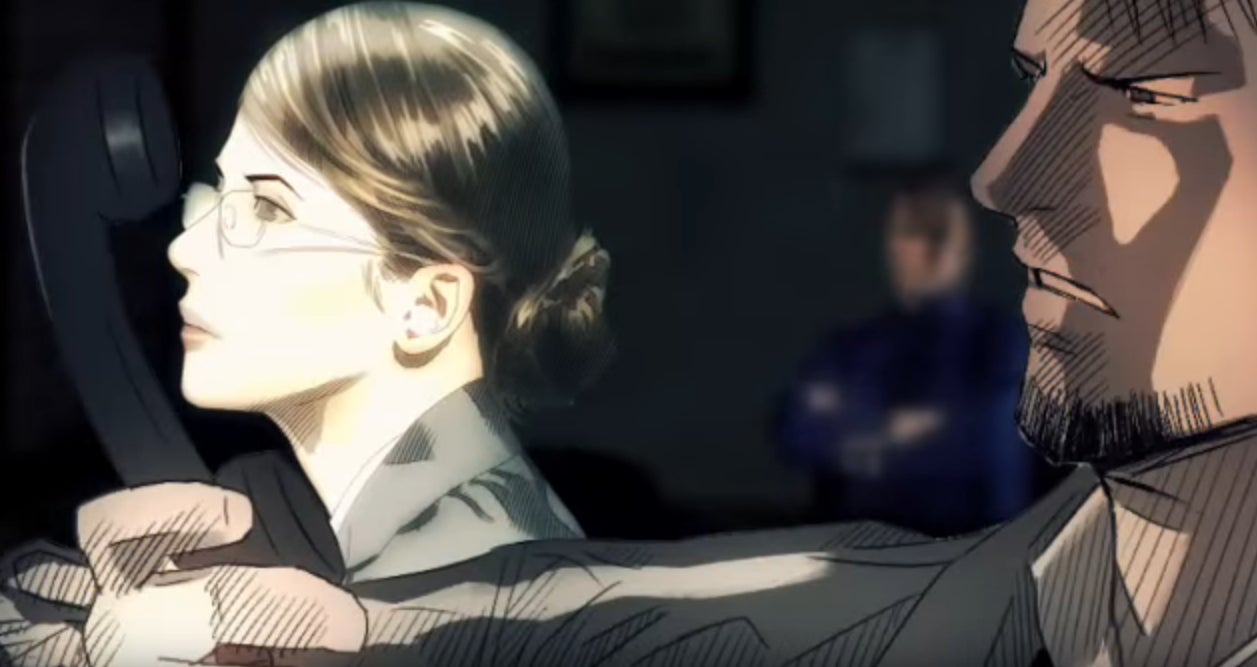 The duology of Last Window and Hotel Dusk has become my favourite series on the original DS. The two games are noir at their best, involving murder, robbery, and explorations of the sordidness of human nature. They’re also some of the best written games I’ve ever played. It’s been a few weeks since I finished Last Window, but the characters and the journeys they took linger in my mind.

I loved the first game, Hotel Dusk, and wrote a retrospective diving into what makes it so special last year. It’s a complex story about the lives of several people intersecting over a single night in the eponymous Hotel Dusk as they unravel the connections that bind them together.

Last Window: The Secret of Cape West has similar themes, but evolves on the original formula. Hotel Dusk was about Kyle Hyde learning the mysteries behind the disappearance of his former partner when he was on the police force. Last Window is about Kyle finding out why his father was murdered twenty-five years ago. During the process, he discovers more about the apartment he lives in and its seedy past. Like the first game, you hold the DS sideways, giving it the feel of a novel. Also similar to Hotel Dusk, the apartment takes on a life of its own with plenty of secrets behind its many hidden rooms, including the entire fourth floor which has been blocked off. To that end, there’s an equally compelling character of residents, each with their own motivations, hopes, and disappointments. Taking place at the end of December in 1980, their apartment, the Cape West, is going to close down, meaning everyone has to move out. 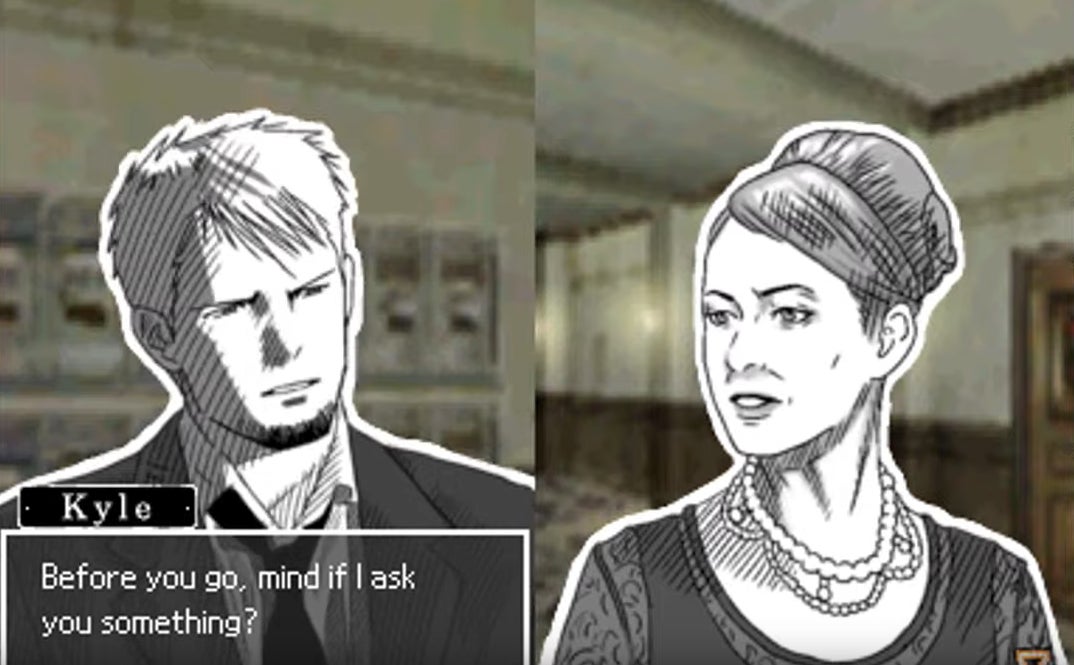 I’ve mentioned in my previous retrospective that I thought Kyle got his name from the actor that played the main protagonist of the hit series Twin Peaks, Kyle MacLachlan. Similar to Twin Peaks, the characters are all fascinating with their own individual quirks and personality traits. There’s Tony, who’s always up to shenanigans and trying to scrounge up money, but is also a damn good musician and becomes a friend to Kyle throughout the week. Margaret Patrice is the stern landlady of the apartment complex and mainly seems concerned with wrapping matters up and collecting the final rent. As Kyle begins to uncover the layers holding the place together, he realises figuring out why she’s decided to sell the place is intricately mixed up with the death of his father. Downstairs in the apartment’s cafe, Claire works with her father to run the restaurant and serves up some tasty meals and coffee. Their banter, musings, and private concerns become part of Kyle’s daily ritual every time he eats there.

Unlike Hotel Dusk, the individual chapters don’t climax with big character reveals. The narrative is much more organic, with the events taking place over a week. Some of the nights even end with more questions than answers. This gives each character’s arc room to breathe, so that one reveal ends up being just one small glimpse through the window of their lives. Many of the evenings conclude with Kyle looking out over Los Angeles, trying to grasp what exactly is going on. The art is dazzling, capturing the mood perfectly. The rotoscoped animation does a fantastic job balancing stylistic panache with a realism in the character’s gestures and mannerisms that make them feel authentic. 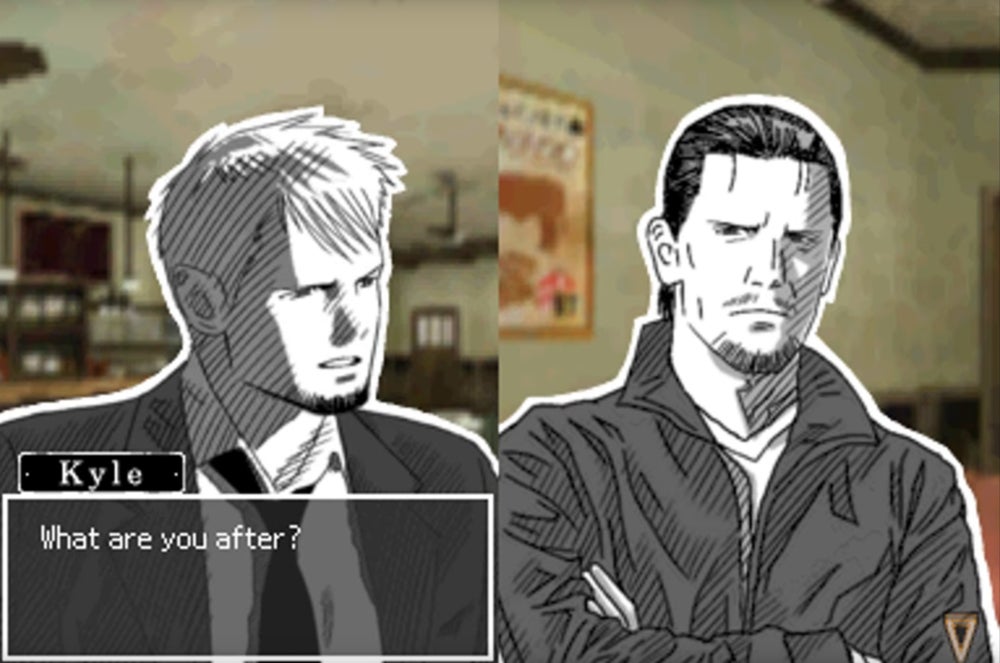 The music binds the narrative together. Jazzy undertones create a web that permeates through each scene. Atmospheric is a word that gets thrown around a lot. But the noirish atmosphere in Last Window drips with character; all of them have a loneliness and longing that is palpable. Dylan seems like a curious voyeur, but ends up having a more sinister background that he wishes he could escape. There’s Rex, who is actually investigating Kyle. He uses one of the residents in the apartment to get information and even calls Kyle’s mum to dig into his past. Rex is one of the most complex characters in Last Window, one who seems like the primary antagonist, but turns out to be yet another wandering soul drawn into the convoluted criminal activities that took place within the Cape West’s walls. An unseen criminal organisation, Nile, is pulling the strings behind the scenes. Even though they never actually show up in the game, their fingerprints are everywhere, spreading misery and sorrow through their schemes.

Stare Into The Heart 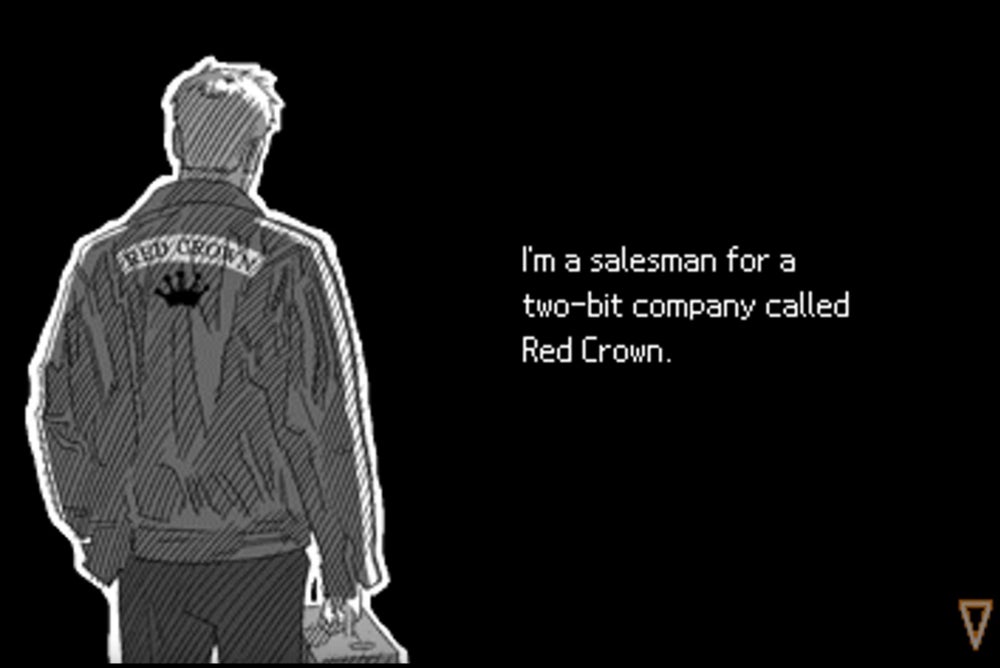 Kyle has retired as a police detective and works at a delivery company called Red Crown. At first, it seems like he’s a door-to-door salesmen, which he does do in part. But the packages and requests vary per client. In this case, the MacGuffin is the Scarlet Star, a treasure that Kyle’s father was attempting to steal twenty-five years ago. But that treasure has gone missing and an anonymous caller asks Kyle to find it. Kyle investigates the apartment inhabitants using his own sleuthing abilities. But unlike other police-themed stories, there’s no violent interrogations, or violence in general. He’s a smooth operator and has an equally slick way with his words.

There are sections where players are given choices on what to ask. Wrong choices can lead to dead-ends and the game’s version of a game over. But they’re rare (I actually never got one) and most of the choices are intuitive. There are also a number of puzzles, including a really difficult music box that took me forever to figure out (in order to get a special key within said box, you have to trigger a latch using the shoulder button the DS, close the DS itself until you hear a clicking sound, re-open it, then somehow flick the key out of the music box). 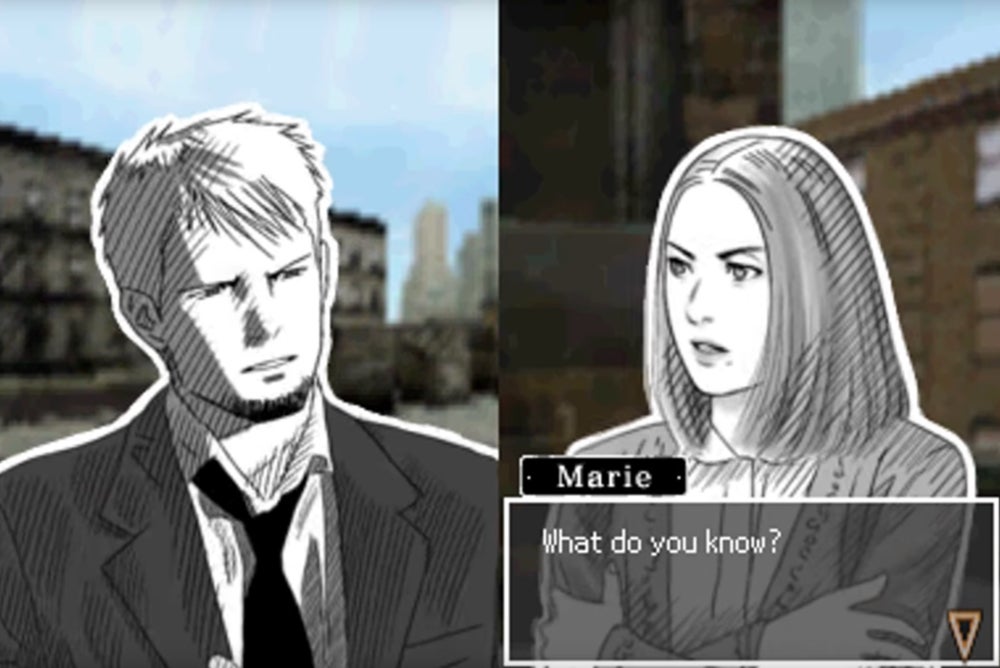 But none of these compare to the real puzzles, which are the characters themselves. I found Marie Rivet to be one of the most compelling and her secrets come in multiple layers. Initially, you learn her husband and brother were both killed under unusual circumstances. Just when you think you know the truth behind those tragic events, Kyle discovers there’s a lot more to the story. And then you think you have it figured out, but it gets even more complicated, driving Marie to one of the most bleak and emotionally wrought sequences in the game.

One of my favourite moments in the game isn’t even relevant to the main plot. A character from Hotel Dusk, Mila, comes to visit Kyle at his apartment as she’s in town for the holidays. They reminisce on the events from the past game, including the Christmas tree they decorated together. Mila gifts Kyle a picture she drew of him. Kyle, in turn through your stylus pen, draws a picture of Mila (honestly, mine turned out pretty bad), which she takes and cherishes. The sequence ends with the two gazing at a lighthouse on the roof and her leaving shortly after that. She doesn’t offer any new clues or provide obscure hints that lead to a later epiphany. Aside from evoking memories of the first game, she isn’t part of Last Window’s narrative. It just felt like I was seeing someone I hadn’t seen in a year. 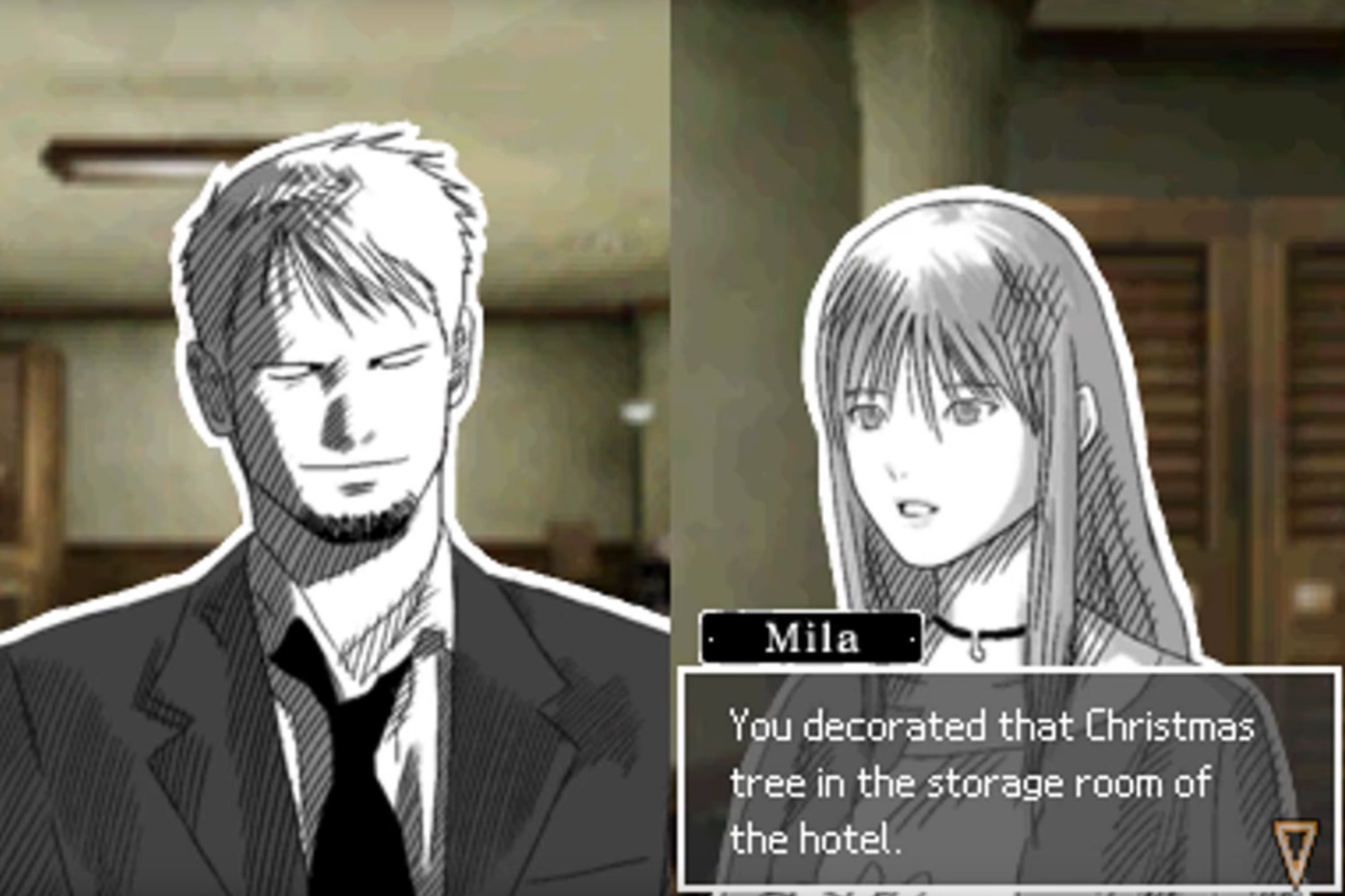 In my earlier retrospective, I called Hotel Dusk a metaphor for America. Last Window narrows that focus to Los Angeles. The residents feel like they belong in 1980s L.A., down to their outfits and dialogue. As more of the secrets get divulged, Kyle’s mum actually sends him a gift, which are the contents of his father’s suitcase when they found him dead. One of the items is a baseball that his father liked to throw with him as a kid. Kyle is surprised. The more he discovers about what happened on that fateful day twenty-five years ago when his father was killed, the more he sees through his eyes. The eponymous last window is in many ways him playing witness to the plight each character faces, while also getting a chance to understand his father’s last moments.

Last Window is an apartment you want to check into. But it’s hard to track down an affordable copy of this game. It was never released in the US and the European version costs a bit. With patience, I was able to find a copy on EBay, but it took a while. For those who do play, it’s well worth the price of admittance. 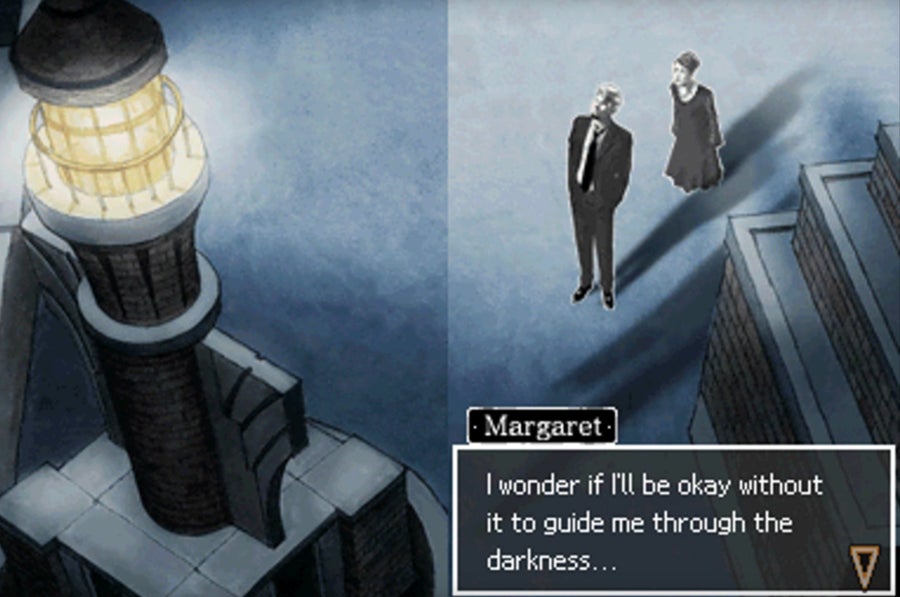 I feel sad Cing closed after the release of Last Window. A part of me wonders if the developers knew the end was coming and hinted at it in a meta way with the closure of the Cape West apartments. As Last Window came to a conclusion, it felt less like a game ending and more like I was parting with friends I’d come to care about. I wish Kyle had a chance to hunt down Nile, maybe even bring them down. But it doesn’t look like that’ll be possible. As I write this retrospective, I’m listening to the soundtrack, soaking in the memories of the experience, wishing I could relive them.

It’s a window everyone needs to look through.