Final Fantasy VII Remake Is Haunted By What Came Before 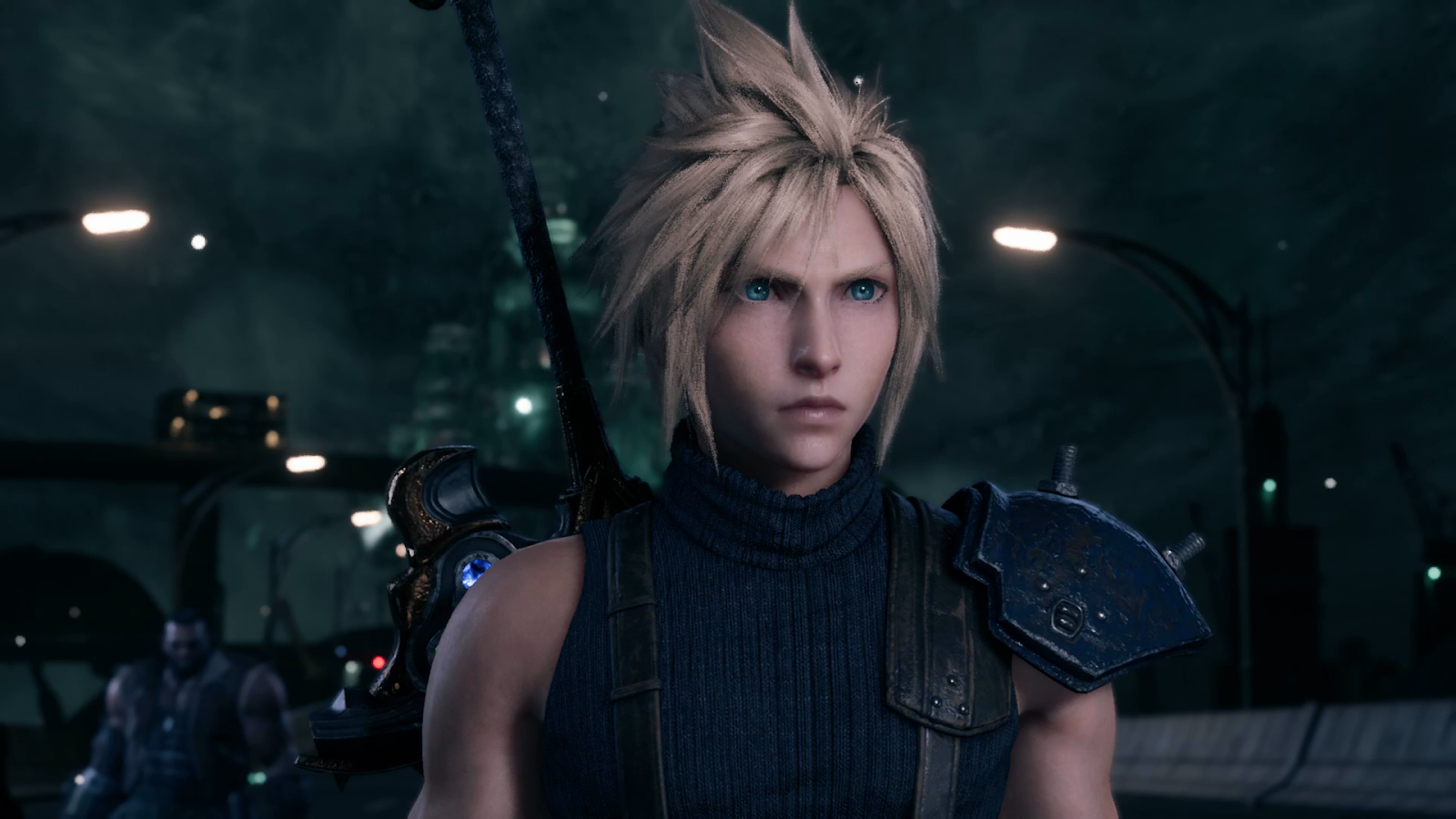 Final Fantasy VII Remake bears a heavy weight on its shoulders, needing to recreate a beloved classic in a way that can ignite the imaginations of old-school fans and newcomers alike. There is an expectation surrounding the game: Be like the thing that existed in 1997. Be the game we loved. Be the game we want now. These expectations can’t be ignored, the hazy cries of countless fans haunting each passing moment like the howling of ghosts.

Here’s the catch about Remake, and once you know it there’s no turning back: This isn’t Final Fantasy VII. It’s not a beat-for-beat remake where the story plays out exactly as before. Instead, it attempts to forge a new path. That path might have similarities to the original PlayStation classic but also some inevitable deviations. As Cloud and his friends stray further from what was, agents of Fate called Whispers guide them back. These ghosts appear within the plot whenever the story begins to deviate from what players might be familiar with. When it seems Cloud will miss the bombing mission in Sector 5, the Whispers attack Jessie so that he and Tifa need to go instead. In a late game scene, Barret is stabbed by Sephiroth and dies. The Whispers bring him back to life—after all, he didn’t die in the original. 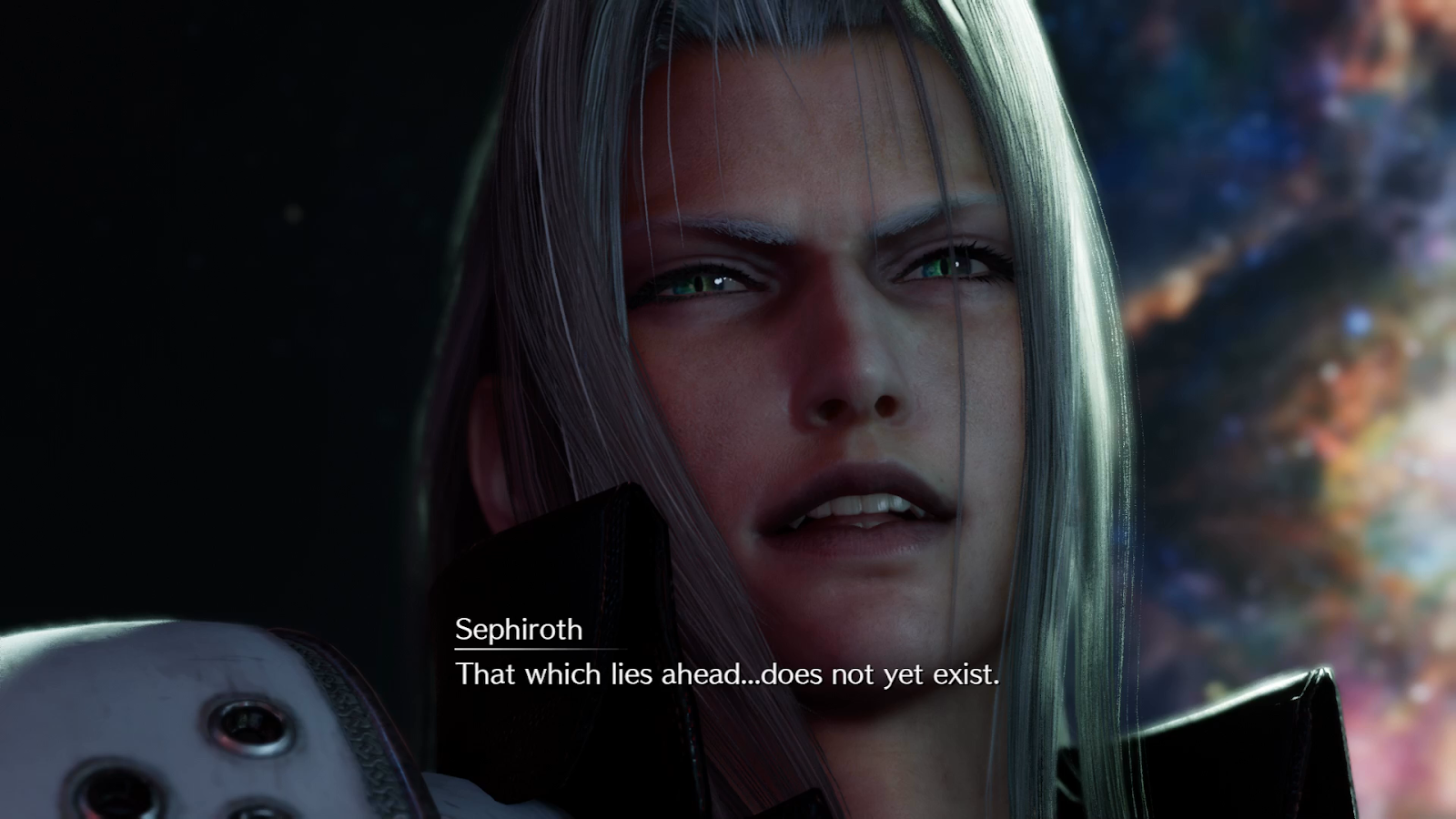 Final Fantasy VII arose in a key period within gaming’s technological development. As systems shifted into the third dimension and carts were phased out for larger-capacity discs, Final Fantasy VII became the poster child for a new generation of video game experiences. “They said it couldn’t be done in a major motion picture,” one television commercial boasted. “They were right.” Final Fantasy VII embraced techniques like intricate backgrounds and FMV cutscenes that were far beyond what players had seen before. The shift to optical discs and higher-fidelity worlds helped cement the Sony Playstation as a cultural force to rival Nintendo’s consoles, and Final Fantasy VII paved the way. Here was this game, this strange but evocative thing, in which eco-terrorists clashed with a cruel corporation, heroes died without warning, and conflict spun out into a world shattering threat.

It was the perfect game at the perfect time. Cloud, Aeris, Sephiroth and their story were embedded into the culture unlike any Final Fantasy game before and arguably any entry since. Final Fantasy VII was formative. Not just for Sony but for a generation of video game players. (And yes, in this case I will call her Aeris.)

When a game achieves that level of success and subcultural penetration it inevitably becomes a crucial piece of the medium’s canon. Do you want to experience Final Fantasy? Do you want to understand Japanese role-playing games? Final Fantasy VII is one of the chief texts that gamers refer to. It’s not just a game, it’s one of the games you play. When a tech demo showing a revamped version of its opening debuted at E3 2005 it lit a fire. Gamers had Final Fantasy VII already but video games are obsessed with emerging technologies and graphical fidelity. Was it possible to experience Final Fantasy VII again? To relive that crucial moment in more detail? Could players have their childhoods back? Even if Square had no immediate plans to create a full remake, there was no putting that toothpaste back in the tube. Final Fantasy VII already belonged to the culture, and now the idea of what a remake could be belonged to gamers as well, birthing an impossible dream to which no studio could live up.

Final Fantasy VII Remake comes 15 years after that teaser, after more than a decade’s worth of rumination and mythologizing about what the shape of such a remake could be. More than anything else, and especially as time passed, the idea of a remake became less of a game and more of a time machine back to a crucial experience. But games exist within the contexts they released into, and so Final Fantasy VII Remake is not merely a chance to reconnect with old friends. It is, necessarily, a moment to grapple with the question of who owns the story of Final Fantasy VII.

Hence, the Whispers: the very forces of time and fate that seek to keep our party on the path they travelled before. No deviation, no difference. “Give us what we want,” they seem to say as they correct every little alteration from 1997’s canonical events. Gamers and the culture had enshrined those moments as crucially important. This was a game among games, whose plot was unimpeachable. Cloud and the others can’t do something different. We didn’t pay $99.95 to get something other than the thing we loved. 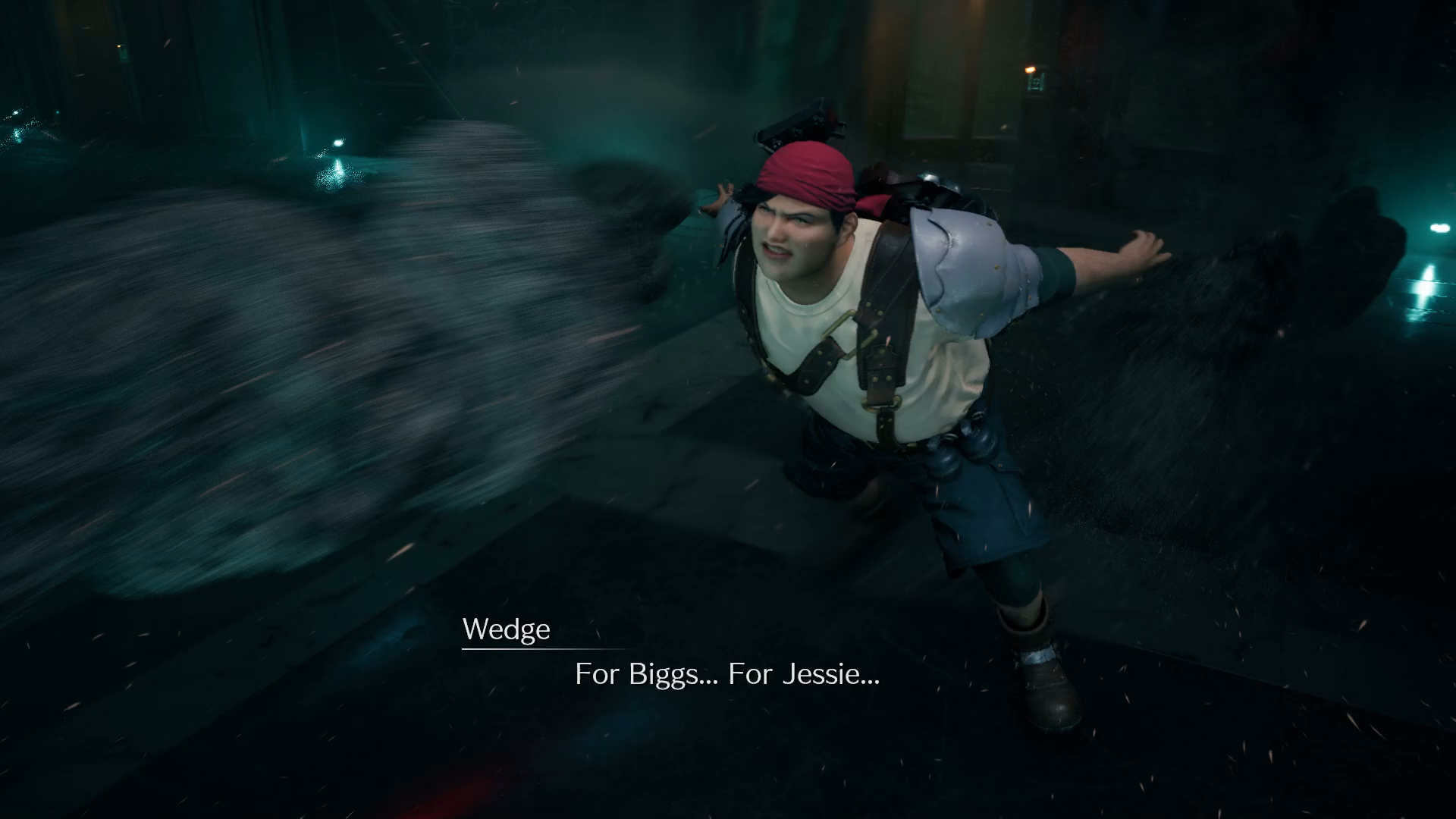 Within the game’s story, the Whispers are a cosmological force. Viewed from the outside, they are something else: the swirling anxieties of players who do not want something different, the vengeful spirits of those who’ll call Square Enix “scammers” when they learn that Remake is not a one-to-one experience. Cloud needs to be on the Sector 5 bombing run! How else can he meet Aerith and form one of the culture’s favourite couples? Reno can’t die! He’s my favourite Turk! As these changes pop up, the Whispers rise to push things back on track, fulfilling player expectations to the frustrations of the characters.

Who owns a story once it is told? On one hand you have the storyteller, who’s crafted the moments and written the plot. They found the voices of characters in their heads and made them speak as loud as thunderclaps. In theatre, actors bring these beings to life and work with the playwright to create a living experience. With games, teams of artists and composers, coders and model riggers, conspire with script writers to create a world players can live in and explore. They make the dream and players, arguably, only get to explore it. But stories also belong to the listener. They snake and slither into our minds and hearts, taking up residence with an importance that the storyteller cannot predict. Those sentiments, that version of the story—keenly coloured by the player’s emotional responses—belong to the culture as a whole. There is the Final Fantasy VII that Square made, the one you played, and the one that we all remember. Which one is true? Which one should be remade?

Final Fantasy VII Remake’s ending suggests that the story belongs to someone else, to a group that’s been altogether ignored within this discussion: the characters. In pushing back and eventually fighting the Whispers and Arbiters of Fate, Cloud and the party create an altered version of the events fans knew. Zack Fair, Cloud’s close friend and the SOLDIER he modelled himself after, seems to have survived his death, which happened prior to Final Fantasy VII’s event at the hands of a Shinra hit squad. Biggs awakens after the battle at the Sector 7 plate, where he died in the original. In effect, the heroes give Sephiroth what he wants—a timeline where nothing is certain, so his defeat may not occur—but also break free from the burdens of player expectation. This is their story now.

Before the final fights, as the party find themselves on the precipice of a portal that will take them beyond time and into the realm of fate itself, Tifa asks Aerith what they will find on the other side.

“Boundless, terrifying freedom,” Aerith said. Because fear is a component of freedom. The fear of the unknown. The fear of failure. The fear that you will not find your way to the end of the path. 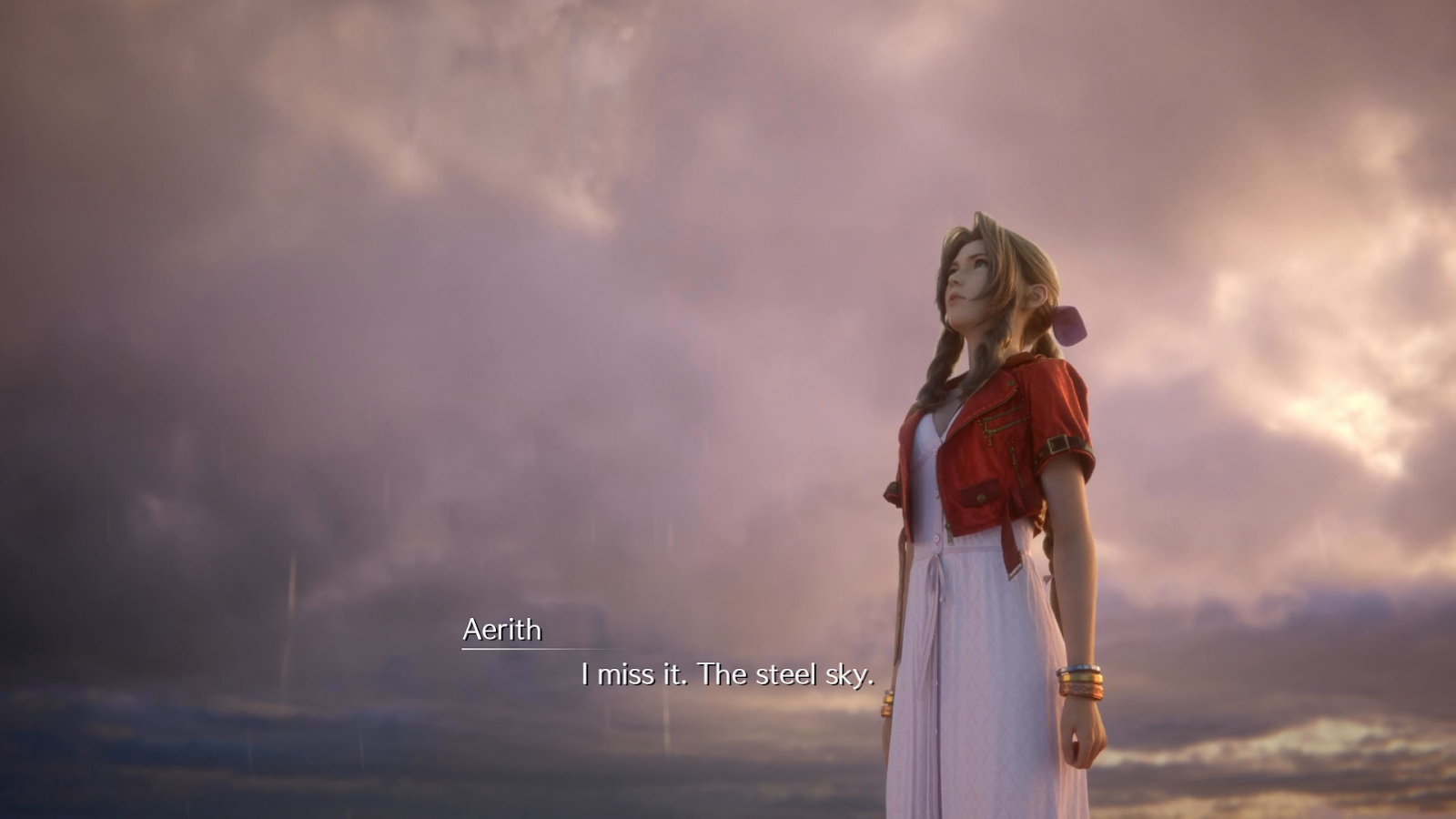 As time shifts and fate changes, a new world emerges. There is no more burden on Remake’s shoulders. Instead, there is anxiety. “I miss it,” Aerith notes. “The steel sky.” Life in Midgar came with certain facts and sureties, the cold and solid steel of the upper city plates looming above the slums chief among them. They are gone, as is any semblance of a future fans might know.

Perhaps events will play out similarly but, free from “canon” and player demands, the future can be anything the characters want it to be. Such a departure might upset fans looking for a perfect recreation of the story they knew, the story they claimed ownership over. Tilt your head and look from another angle, and you will find a spectrum of colour and possibility. An electric sense of freedom in which Final Fantasy VII can be anything and everything. It’s fine to miss the solid steel sky, but exhilarating to know that there is no future but what the party makes. It might be messy, or it could be the “perfect” version of events. But it is their own story now, and that is at least as beautiful as the sun-tinged horizon.