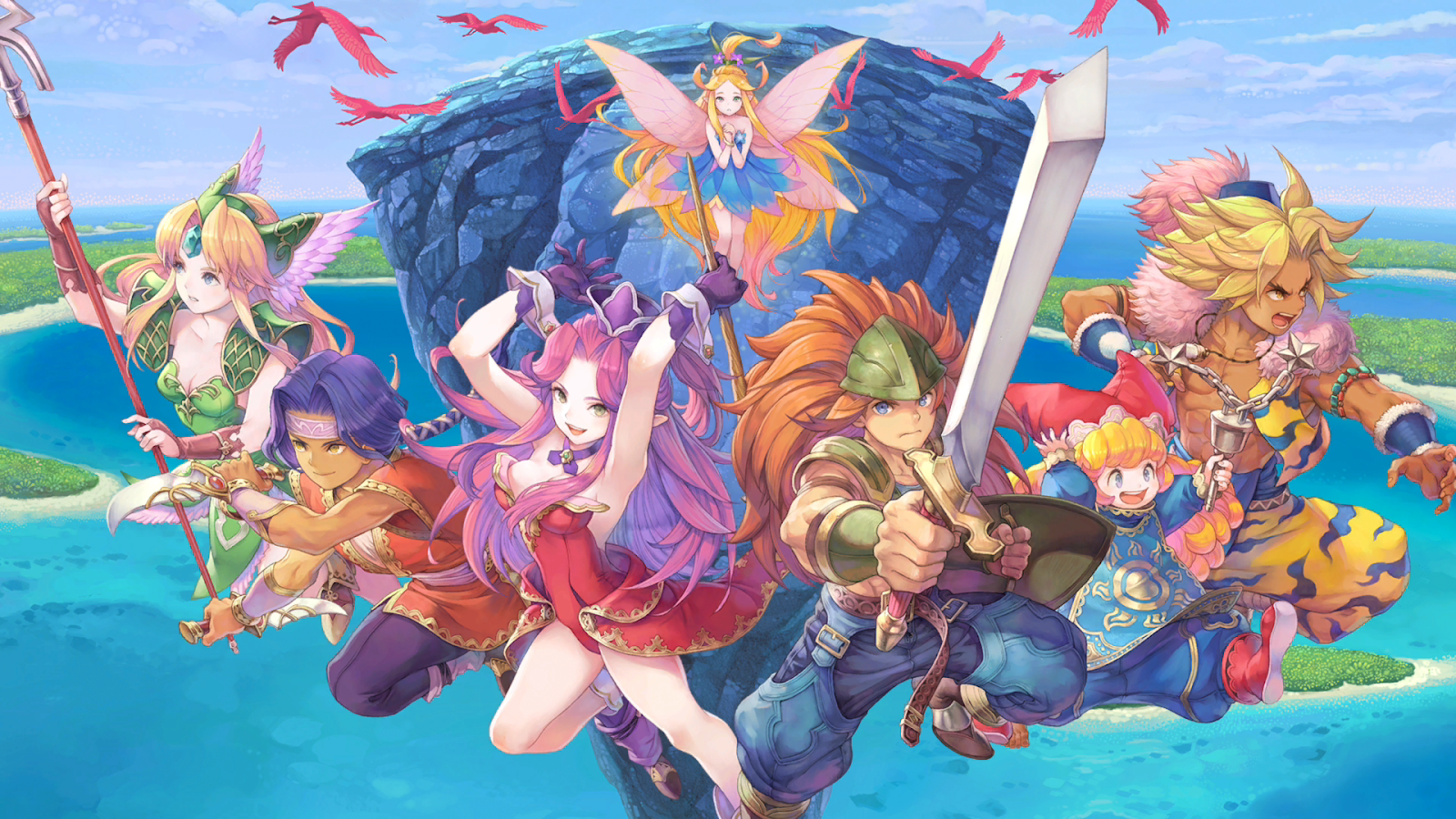 Illustration: Square Enix
To sign up for our daily newsletter covering the latest news, features and reviews, head HERE. For a running feed of all our stories, follow us on Twitter HERE. Or you can bookmark the Kotaku Australia homepage to visit whenever you need a news fix.

The second high-definition remake of a 90s-era Square Enix role-playing game coming out this month is much more faithful to the original than Final Fantasy VII. Beneath Trials of Mana’s cartoonish 3D makeover and questionable voice acting, it’s the same simple, satisfying action RPG it’s always been.

Trials of Mana began as Seiken Densetsu 3, the 1995 Super Famicom sequel to classic action RPG Secret of Mana. Though Western fans have been playing for two decades via unofficial translations, the game did not see an official English release until June 2019 as part of the Collection of Mana compilation. Now, less than a year since the original was officially introduced to the Western world, we’ve got a high-definition 3D remake. 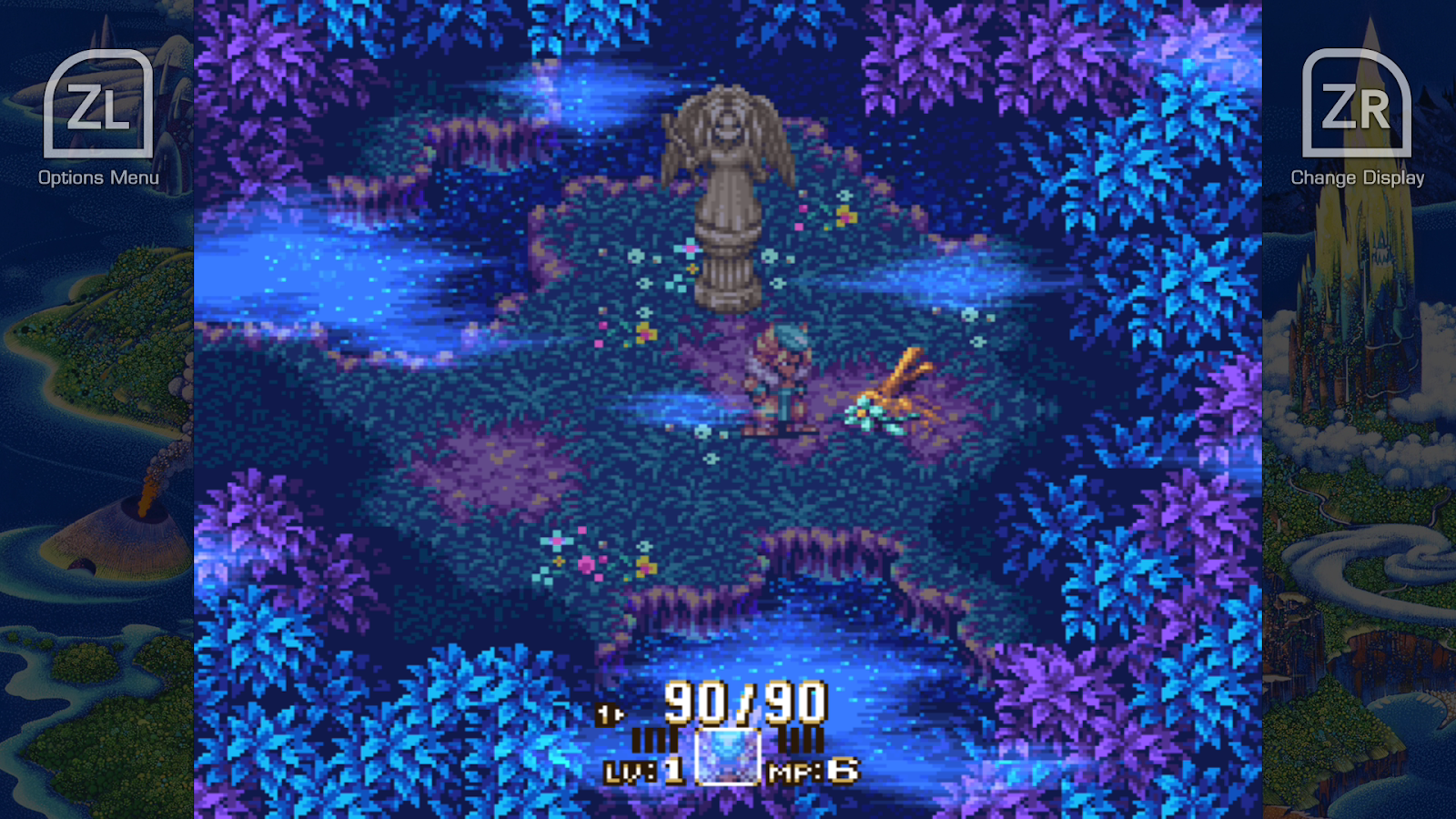 For folks whose first experience with Trails of Mana was last year’s localisation, the timing is odd. Remember the game you played last summer? Here’s that same game again, only it looks and plays much better. Fans old and new should be pleased with what Square Enix has done to modernise the classic: The Trials of Mana remake greatly improves on the clumsier parts of the original game, while leaving the good bits the hell alone.

The dynamic storytelling of Seiken Densetsu 3, one of its greatest strengths, is unchanged. Players select one party leader and two followers from a group of six. Each character has a different origin story. Kevin is a half-human character whose beastman father goes too far in trying to bring out his inner animal. Hawkeye is a member of the Nevarl thief tribe whose leader falls under the influence of an evil sorceress. Riesz is a princess from a mountain kingdom who’s searching for her kidnapped brother. 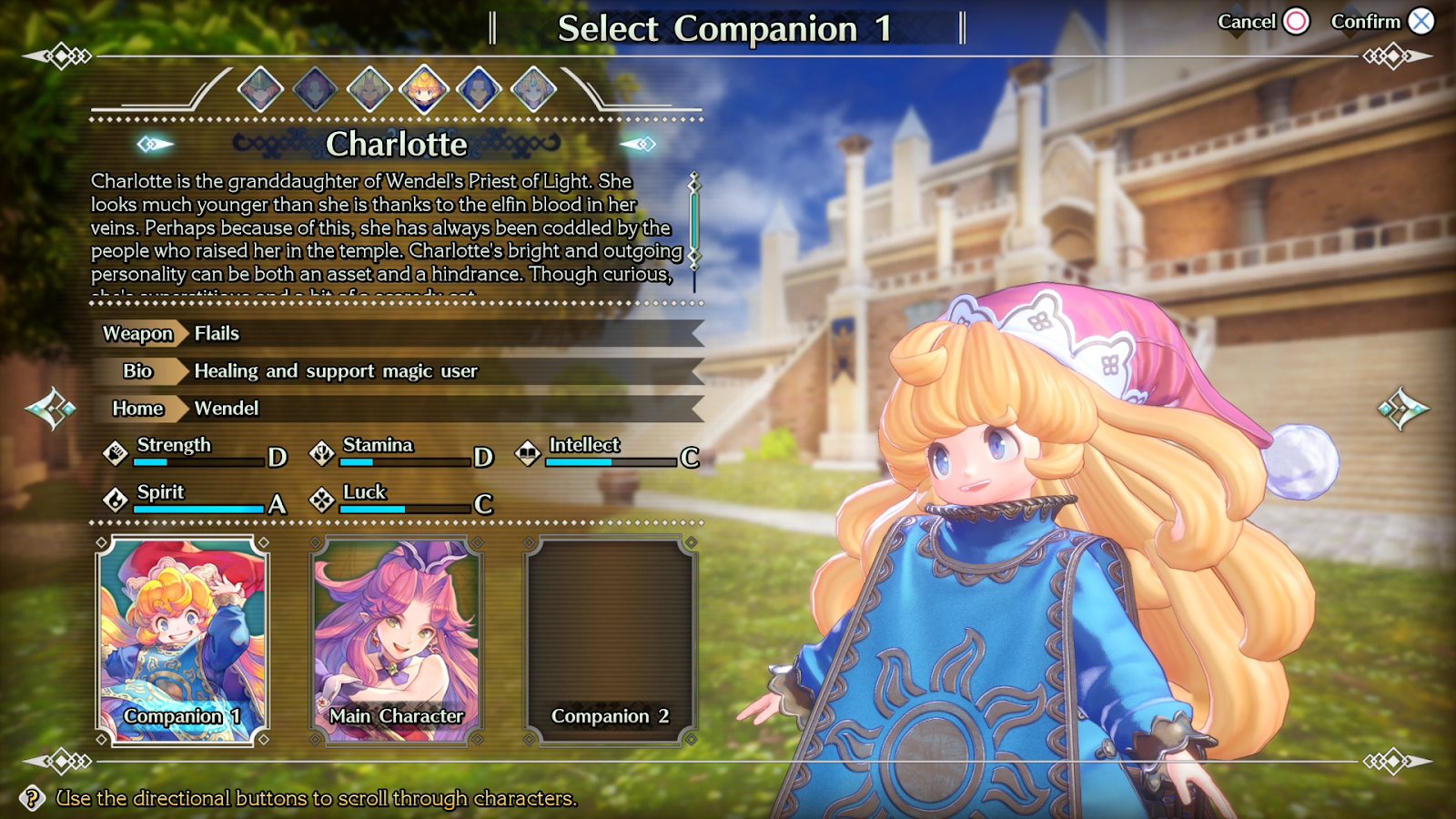 No one should pick Charlotte. Her baby-speak is intolerable. (Screenshot: Square Enix, Kotaku)

The main plot of the game stays the same no matter which characters are chosen. The team of three must hunt for elemental spirits in order to retrieve the legendary Sword of Mana and save the world from destruction by an ancient evil. How events play out and how the player’s party reacts depends on the characters they choose. Valsenian soldier Duran reacts much differently to an invasion of his home town than any other character, for example. Each character also shares one of the game’s three main villains, so pairing them up together makes for livelier conversation.

The six characters also have very different skills and abilities, which can affect how battles play out over the course of the game. Having the healer Charlotte in your party makes tough battles survivable without burning through the party’s inventory of healing items. Having a character with the ability to debuff enemies in the party helps give the attacks of a basic brawler like Kevin more impact. At certain points in the game players can change their character’s profession, selecting branching dark and light classes with their own focus and special abilities.

The biggest difference between the original Trials of Mana and the remake is how much better combat is in the updated version. The Super Famicom original did the best it could, but its basic 2D battles have nothing on the energetic 3D brawls of the remake. Characters can lock onto enemies, attacking from behind for greater chance of landing critical hits. There are now light and heavy attacks, with the latter generating crystals used to fill each character’s super metre, used to unleash powerful special attacks. There’s dodging and jumping, two moves the original didn’t have (or need, really).

Fighting is so much more exciting in the new Trials of Mana. Even when backtracking through areas with lower level creatures, which happens quite a lot, smacking critters down is a lot of fun. 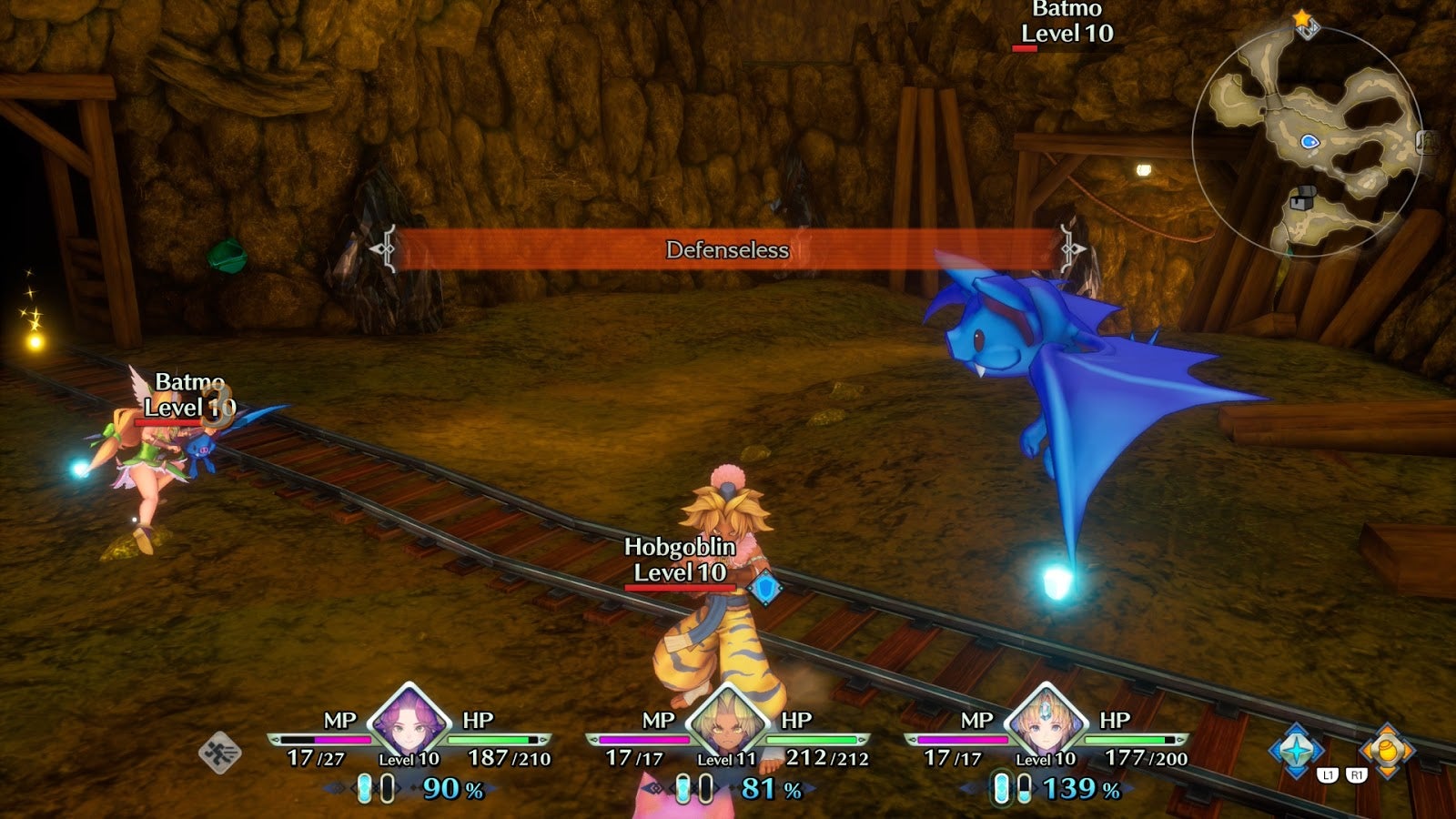 Gotta jump to get those bats. (Screenshot: Square Enix, Kotaku)

It’s good that the combat is so compelling, because there’s not a lot to do in Trials of Mana besides fighting. Outside of buying equipment and searching for treasure and the odd collectible, there’s little reason for players to stick around in town. Non-player characters important to progressing the plot are clearly marked. There are characters scattered about the world’s cities who grant the party new special abilities when interacted with, but they’re generally pretty obvious. 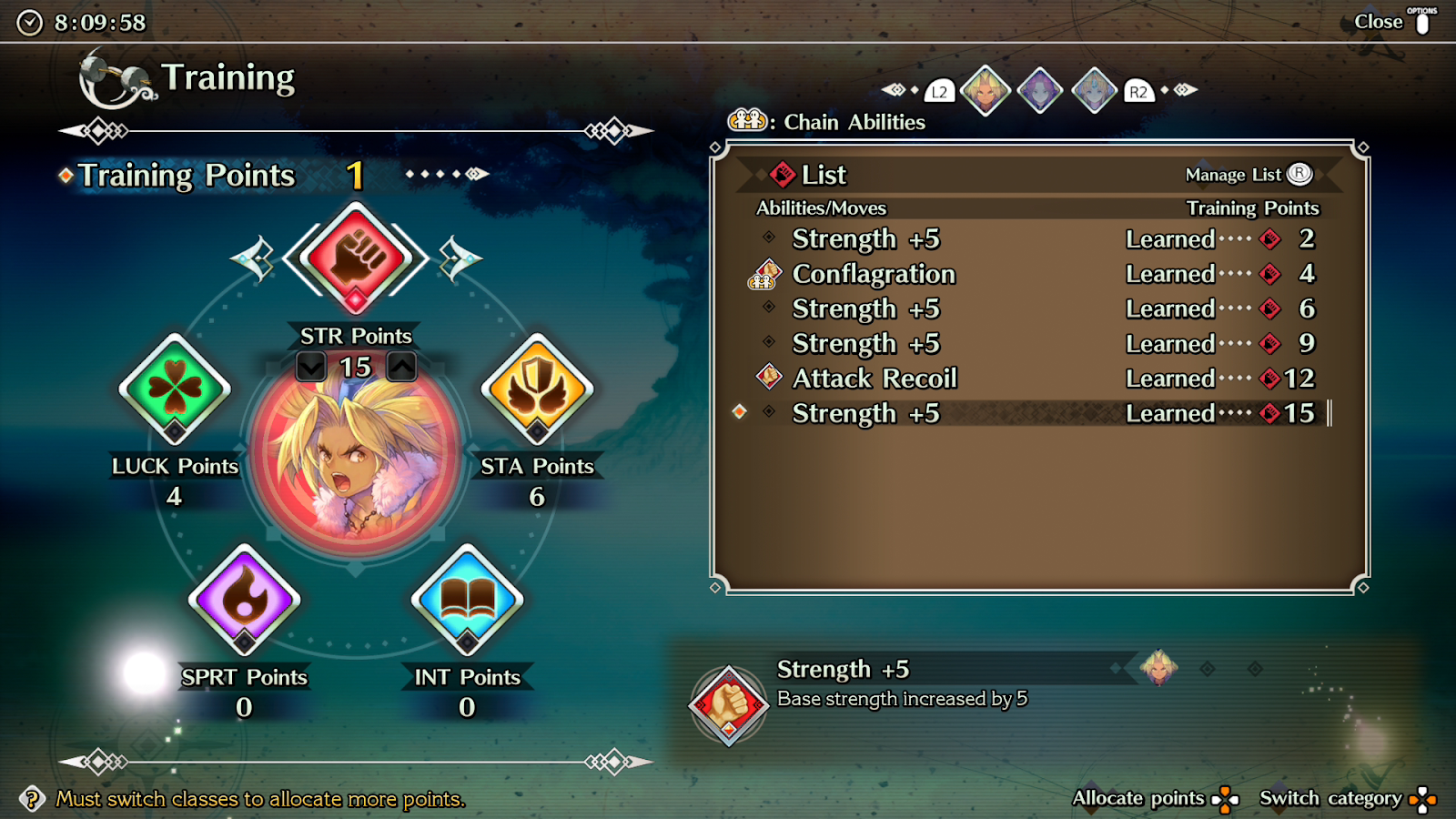 Unlike the original, there are good reasons to put points into off-class stats. (Screenshot: Square Enix, Kotaku)

That’s because unlike Final Fantasy VII Remake, which has been crammed full of all sorts of extras and padding, Trials of Mana largely stays true to the Super Famicom original. The combat is exciting and new. Character level progression has been tweaked, with new abilities to unlock depending on how players spend their skill points. The music is beautifully remastered, with the original tracks selectable from the main menu. The English voice acting isn’t great, but it can be swapped for Japanese or muted entirely.

Outside of those mostly welcome changes and additions, the HD remake of Trials of Mana is very much the original game with a fresh coat of paint. The story is the same. The characters are the same. And hey, Square Enix managed to do the whole thing in one single release. Take that, Final Fantasy VII Remake.