So many games only let me play as a human. Sure, that’s fun, but it’s not really taking full advantage of games’ ability to let us be and do anything. Maneater gets it. In Maneater, I’m not a dull person—I’m a shark. A dangerous, agile, and cool shark, free to swim anywhere and eat whatever and whoever I like. Sadly, most of what this cool shark does is a bunch of repetitive missions.

Maneater is an open-world-action-game with some RPG elements, starring an unnamed shark on a revenge mission. At the start of the game, you play as a big and powerful shark who is captured, then brutally killed and gutted by a shark hunter named Scaly Pete. During the gutting, he literally rips out a baby shark, but that pup bites Pete’s arm off and escapes. For the rest of the game, players take on the role of that baby shark and level up, growing bigger and stronger in the process. The end goal is to kill Scaly Pete and get revenge for what he did to your mother. It’s not the most complex narrative, but sharks don’t need long, well-written stories to justify killing things.

The game is presented in the form of a reality show, not unlike ones you might find on the Discovery Channel. The few cutscenes include hashtags in the corner for viewers to use, camera people asking questions, cutaway interviews, and narration. During gameplay, the narrator, voiced by Chris Parnell, talks about what the shark is doing and provides some jokes about the world of Clovis Bay where the game is set. All of this is done well, and some of the jokes are genuinely funny. But these cutscenes don’t happen often; I would sometimes forget the game even had a narrator.

The real star of the game, and the main reason folks are probably going to play Maneater, is the shark action. While the narrative can feel half done or not entirely fleshed out, playing as the shark is damn near perfect. The way the shark swooshes and glides through the gorgeous underwater areas of the game feels great. I spent a lot of time between missions just swimming around exploring. The shark can leap out of the water to attack people, grab creatures and thrash them around and even whip things with its powerful tail. As you level up, the shark not only grows bigger but earns new evolutionary traits. Because Maneater isn’t a realistic simulation of being a shark, these traits include bone-covered teeth giving you more damage, electrical fins that stun enemies, or sonar that helps you find collectibles. By the end of the game, I was a deadly and huge shark, covered in bone armour and able to leap 50 feet out of the ocean. I could destroy dozens of boats in mere minutes and could climb on to the land to kill a whole crowd of boomers golfing. 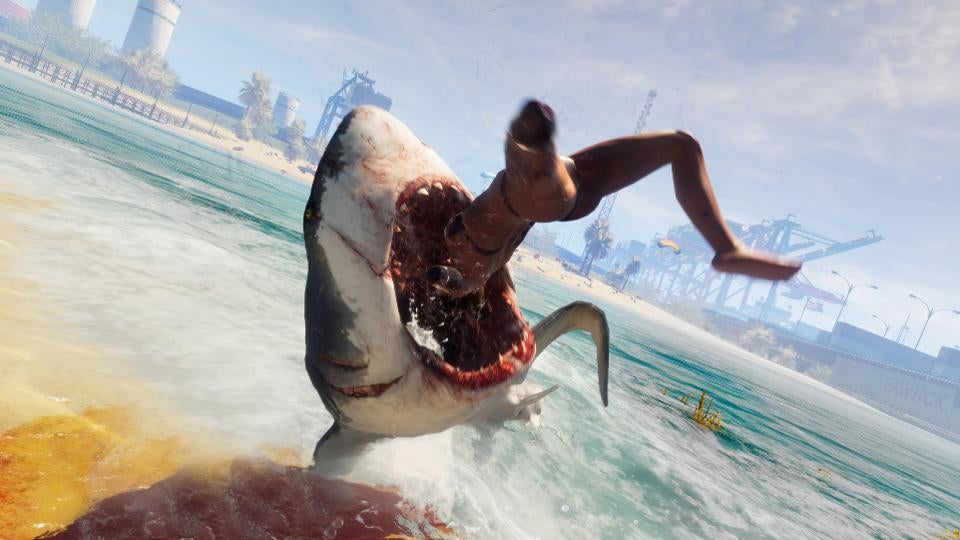 Being a shark, exploring the world, killing things

As you cause mayhem, you fill up a metre; kill too many people and you’ll get some heat from aggressive shark hunters who try to kill you. At first these hunters proved annoying and hard to kill, but soon my shark was powerful enough to deal with them easily. Overall, I found it was best to avoid them by leaving the area and hiding deep underwater, because otherwise I was stuck fighting an endless amount of hunters with no real reward beyond some XP and resources.

Developer and Publisher Tripwire Interactive use the genre name “ShARkPG,” which is ridiculous and, honestly, a bit of an oversell. The shark levels up and unlocks evolutions, which basically function as gear, but you don’t make any narrative choices like you would in a traditional RPG. All you do is kill and kill and kill. Every mission is just killing: At one point in the game, I had to complete a mission where I was tasked with killing 10 hammerhead sharks. Then I had to…kill 10 hammerhead sharks in a new area. And finally, I had to…kill 10 hammerhead sharks…again. That’s how every mission works in Maneater. You go to a spot in the ocean or swamp, kill 10 to 15 things or kill or destroy one really big creature or boat, then repeat. Playing as the shark is fun and enjoyable—you truly feel like a badass predator able to take on anything and go anywhere, even on land, —but I wish there was more variety beyond quests that feel like they were ripped out of the early years of World of Warcraft. The game took me a little over 12 hours to complete, which felt like just long enough given the lack of variety. Despite the repetition, Maneater’s world is worth exploring. Each area of the map, which you unlock by completing missions marked on checklists, looks different and has its own sea life and variety of humans. There’s a swamp area, filled with gators. There’s a large ocean area where you can find impressively big sperm whales and other sharks. There’s also a fancy golf resort, an aquarium, and a beach resort to wreak havoc in. The entire world is lovingly detailed, and exploring it was often more fun than doing any of the missions.

Returning to areas you’ve previously visited once you’ve leveled up is also fun. For example, you start in the swamp as a tiny, baby shark. Gators seem like unkillable monsters, and even barracudas are deadly for the first hour or two of the game. Later on, you can return to this location and find the gators are no match for you anymore. I had a blast returning to older areas, not only to explore places I missed but to get some revenge on the creatures who once hunted me down when I was smaller. It really makes you feel like you’re a shark who’s growing more powerful over time.

I enjoyed a lot of Maneater, even if the repetitive missions grated on me. It was fun to swim around as a shark, fighting whales and hunting down evil humans. Exploring the world of Port Clovis as a sleek and deadly maneater reminded me of how great it felt to swing around NYC in Spider-Man, including ignoring objectives to explore just a little longer and find collectibles. Despite its lack of things to do, Maneater does one thing—being a bloodthirsty shark—very well.