The new single-player story content in Mortal Kombat 11’s Aftermath expansion stars the treacherous sorcerer Shang Tsung. Having that backstabby, soul-stealing bastard front-and-centre is a good sign that betrayal is going down at some point. It’s just a matter of when and how much.

Out today for PC, PlayStation 4, Switch, and Xbox One, Mortal Kombat 11: Aftermath is a paid expansion that continues the single-player story from the initial release and adds a trio of new playable characters. Japanese wind god Fujin returns to the series, as does the four-armed Queen Sheeva, both playing key roles in the new story chapters. The third new character, Robert “Robocop” Cop, is a new guest character who sadly does not appear in the story. Along with the paid update, Netherrealm Studios also released a free update for all players that adds new items and equipment, brings back classic stage fatalities, and gives characters the means to end a fight on a positive note with warm-hearted Friendship fatalities. 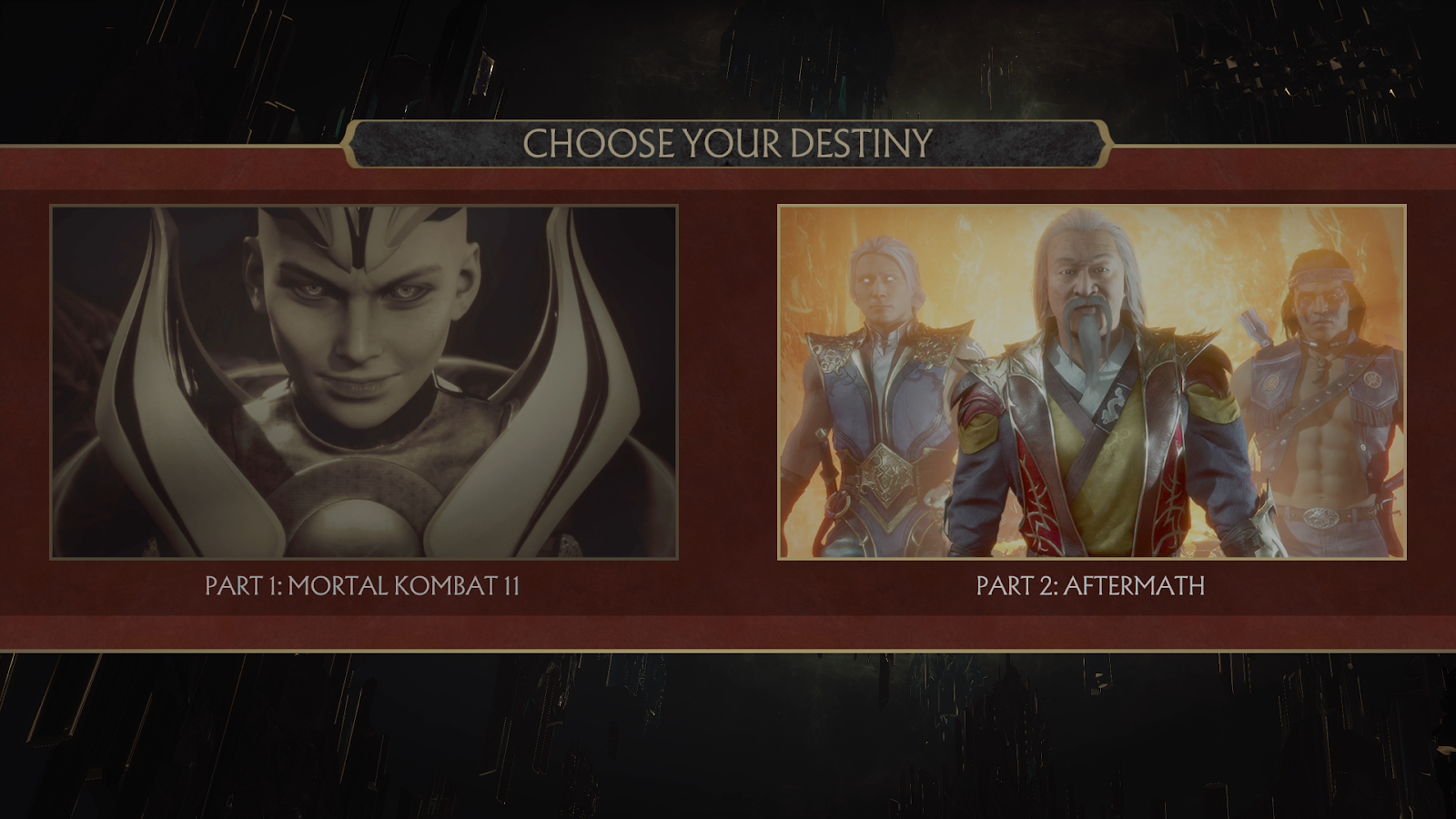 As a solo player who’d rather not compete online, I’m all about the new story expansion. Called “Part 2: Aftermath,” it picks up where the first part of the story left off. To set that up, we’re going to need to spoil a few things.

Mortal Kombat 11’s big boss is Kronika, the keeper of time, who seeks to use her vast power to erase the influence of thunder god Raiden from the timeline. In Klassic Towers mode any character can defeat Kronika and rewrite history as they see fit. In the story mode ending, which is Mortal Kombat canon, Raiden grants his power to Liu Kang, transforming him into the god of lightning and thunder. Fire god Liu Kang defeats Kronika and prepares to use her power to completely reshape history.

The new chapter picks up where the old one left off, but as Liu Kang starts reshaping, a portal appears, spitting out wind god Fujin, spiritual warrior Nightwolf, and good old Shang Tsung. The trio, who were trapped by Kronika and freed upon her defeat, warn that Liu Kang cannot reshape history without Kronika’s Crown of Souls, which was destroyed during their final battle. If he tries without the crown, time will be destroyed forever. Fortunately, Shang Tsung has a plan.

Mr. Tsung offers to go back in time to steal Kronika’s crown from his own palace, at which point he’ll totally give it to the good guys and let them win. Nothing can go wrong with his plan.

A few things go wrong with his plan. First off, Liu Kang doesn’t send the trio far back enough in time. Shang Tsung, Fujin, and Nightwolf appear in the middle of one of the original story’s huge set pieces, sneaking through the background of events that have already taken place. It’s very Back to the Future. Or Back to the Future II.

Due to Shang Tsung and friends’ meddling, events that occurred in the original story chapters begin to unfold differently. Alliances made in part one crumble apart in part two, leading to a very different version of the final confrontation. Players on both sides of the battle between good and evil get betrayed all to hell.

I don’t want to spoil too much about this entertaining little rewrite of recent Mortal Kombat history. It’s nice to see characters introduced as part of the game’s battle pass downloadable content—Sindel, Shang Tsung, and Nightwolf—getting to participate in the narrative. The story is as predictable as Shang Tsung’s relentless pursuit of personal power at any cost, but it’s still a fun ride. 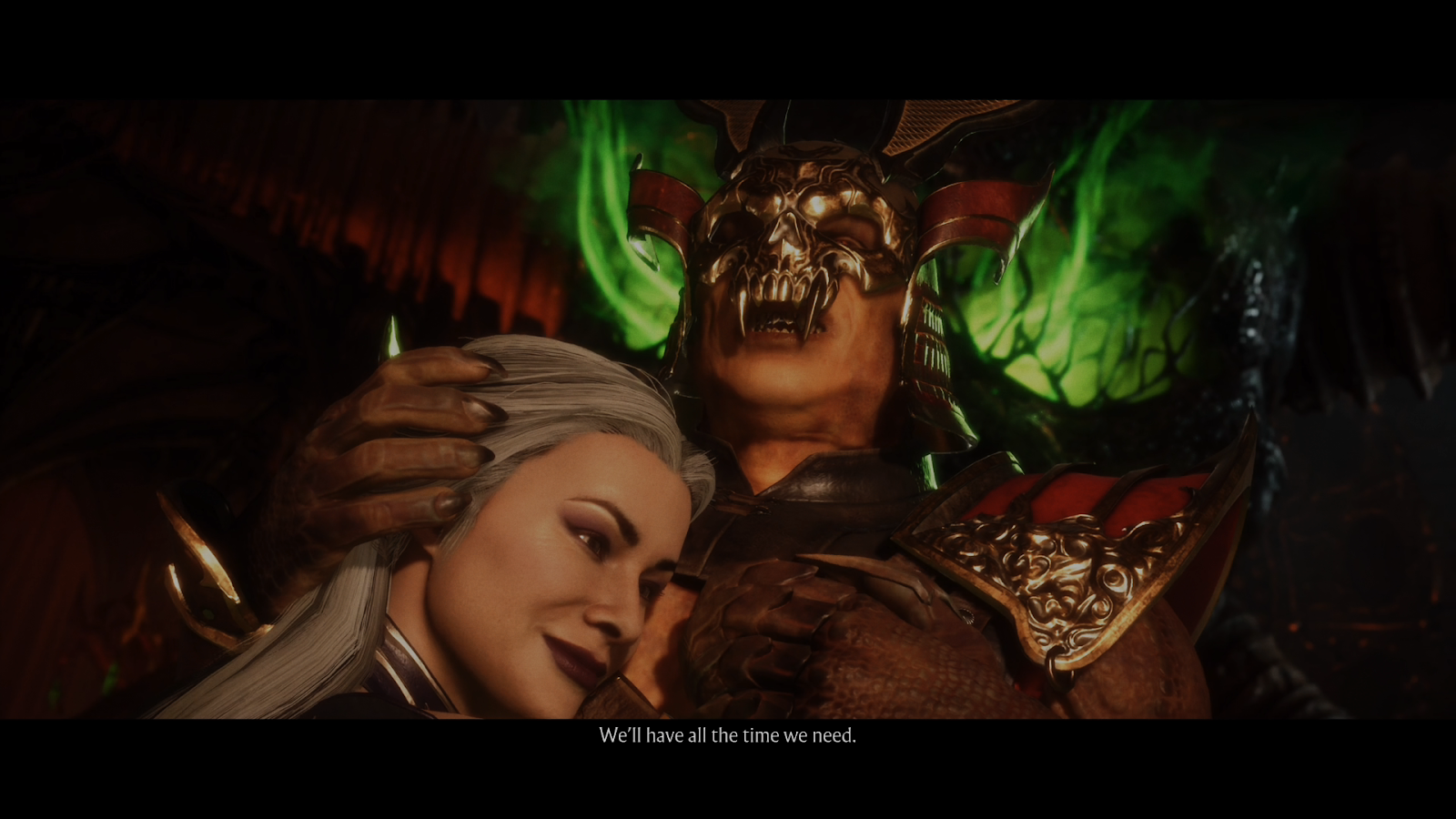 The entire thing only lasts two and a half hours, depending on how good players are with Fujin, Shang Tsung, Nightwolf, and a handful of other characters. It’s the same formula as before. There are five chapters, numbered 13 through 17, each revolving around a character or pair of characters. The story plays out in lengthy cutscenes interspersed with standard Mortal Kombat 11 battles. During some chapters and at certain key moments the player can choose which character to play as. Once the story is over, completionists can use chapter select to go back and play with different choices.

Heads roll, characters live, and characters die. When the grand prize in the tournament, as it were, is the ability to completely rewrite history, all sorts of gory stuff can happen with ultimately no consequence whatsoever. Mortal Kombat 11 was always going to be the end of the series’ current fiction and the beginning of something new. Aftermath just gives players a couple more hours of betrayal-packed drama to enjoy as we wait for the next reboot.