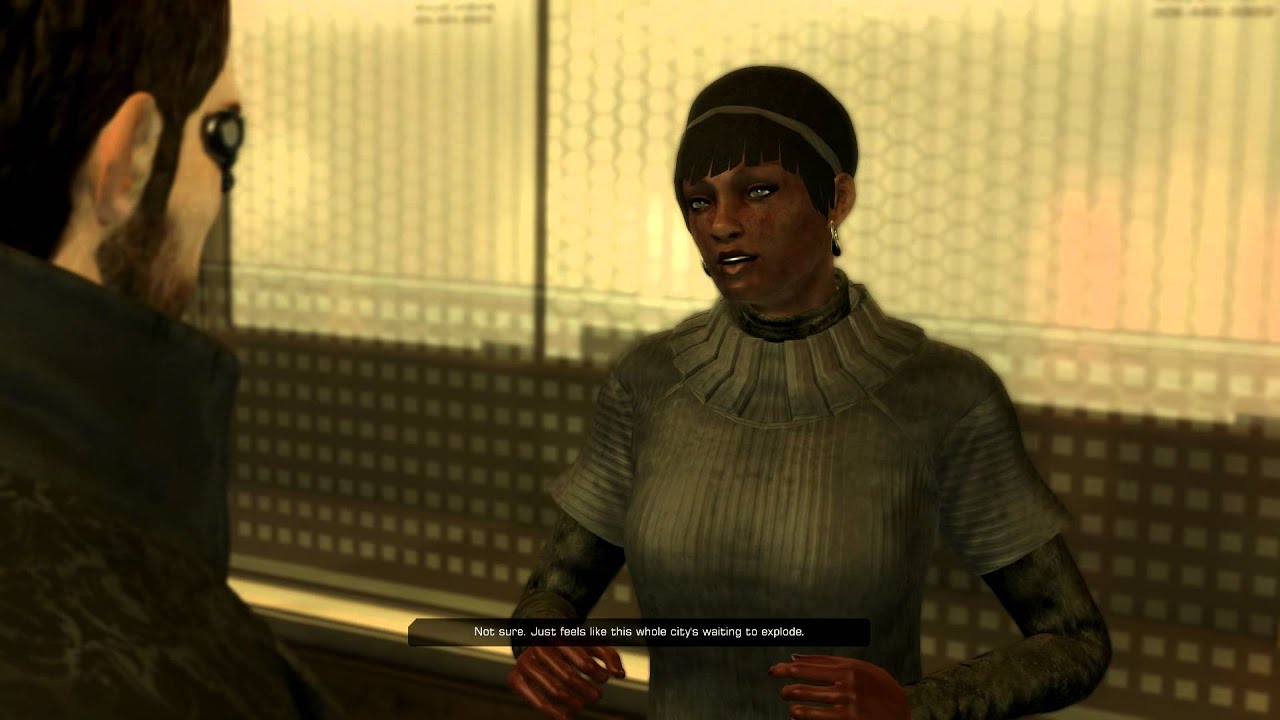 For the most part, the characters in Deus Ex: Human Revolution stick to the middle of the road. There’s the tortured, hard-to read protagonist, the brilliant woman with a secret, the sassy British tech guy, and so on. But among them, one character sticks out — Letitia, a street informant that Adam Jensen meets in Detroit.

Letitia speaks in a ridiculously exaggerated dialect that could charitably be termed “Southern Black Caricature”. It feels jarring in a game with such generally low-key characters, and it’s anachronistic to boot. In the year 2027, would a down-and-out Detroit woman really speak like this?

Over at Time‘s “Techland” blog, Evan Narcisse wrote a well-assembled analysis in which he calls Letitia the “worst part of a very good game”. In Narcisse’s words, “Letitia embodies a strain of racist stereotype that renders black people as less than human, as the worst that society has to offer.” He continues, breaking down how the character undermines what could have been a powerful interaction:

Look, I get what Letitia’s supposed to be. She’s an informant in the Huggy Bear mode, the street person whose access to the underworld helps the hero get to the next part of the plot. Is she a have-not? Absolutely. Does she sound like the other have-nots in the game? Absolutely not. From 1:57 to 2:12 of the above video clip, Letitia talks about people losing jobs and homes, going on to say that the city feels likes its going to explode. If things were different, if Letitia was at all recognisably human, you could read those chunks of text as either a reference to the infamous 1967 Detroit Riots or the current discomfort created by the global economic downturn. The potential metaphorical depth that DXHR could hold in that moment gets squandered by the character delivering it.

Letitia talks about people losing employment and real estate, and it makes one ask if she ever had either or even any dignity. Did she make bad choices in life that had her digging in the trash? Or was she born in the gutter and never made it any further? If Letitia is supposed to communicate how broken society is in the DX: HR universe, she doesn’t need to look and sound like am homage to Amos ‘n’ Andy.

Oh, I can imagine some of the responses to my criticism: “You want to censor creativity. You just want everything to be politically correct. It’s just a video game; what’s the big deal?” Those responses are wrong. To those who’d retort in that way, I ask this: Can you stand by Letitia? Could you sit someone in front of one of the best games of the year, have this sequence come up and not squirm at her every line?

You really do have to see the video in action to get a sense of why it’s so offensive; indeed, if I were to sit someone down (particularly a black friend) and watch them play this segment, I’d squirm at every line. Letitia certainly sounds nothing like the other hobos that dot the Detroit map, and her initial greeting (“Well, Sheeeeeit. If it ain’t the Cap’n hisself!”) is utterly cringe inducing.

In response to the criticism from Techland and several other sites, Human Revolution‘s developer Eidos Interactive released the following statement:

Deus Ex: Human Revolution is a fictional story which reflects the diversity of the world’s future population by featuring characters of various cultural and socioeconomic backgrounds. While these characters are meant to portray people living in the year 2027, it has never been our intention to represent any particular ethnic group in a negative light.

It’s nice that the company has responded, but that’s not exactly an apology; lack of intent doesn’t make a problematic stereotype any less problematic. Generally speaking, lazy racial clichés simply have no place in games (or indeed, in any other media). Granted, we’re in something of a murky area here; playing with racial stereotypes can work or even be humorous, depending on the context. But it depends hugely on tone and delivery, and it’s much trickier with a crudely animated video game character. The actor’s voice has to do most of the work, so if the vocal performance is off, it can hugely affect the scene.

As Narcisse points out, the character of Letitia is in the game mostly for the purpose of offering advice and filling in some of Adam’s backstory. Does it add anything to make her sound so casually, anachronistically offensive?

A good chunk of Human Revolution takes place in China, and I enjoyed how detailed and immersive the setting was. The game rarely (maybe never?) felt like it was easing into Asian stereotypes; it was immersive and distinct, and many of the NPCs spoke in un-subtitled Chinese.

In fact, the Chinese levels were so well-done that I get the sense that Letitia was a rare slip-up from a team that was dedicated to creating a convincing sci-fi setting filled with various races and ethnicities. Unfortunately, that doesn’t make her character any less offensive.