Some Players Really Want To Get Ghost Sims Pregnant

Just like their living counterparts, the ghost Sims that EA recently added to The Sims 4are a little different than their predecessors. Most notably, they can't procreate. That means no pregnant ghost Sims, and no ghost babies. For now, that is. If some players have their way, that won't be the case for long.

EA introduced ghosts to The Sims 4 on October 1st by way of a free update to the game. By October 5th, the popular and influential Sims blog SimsVIP had published an article promising to show players "how to make ghosts pregnant." The article suggested a cheat of sorts, one that effectively tricks The Sims 4 to treat a ghost Sim like a pregnant, living Sim:

Please note that your Sims will remain in this state permanently. If you want to remove the pregnancy buff and belly, you will need to do the following:

4) Purchase a bassinet in buy mode and "Give Birth". This removes the pregnany belly. (No baby)

If only it were that simple.

See, the SimsVIP article wasn't offering players a full-fledged mod like some of the appropriately wacky, occasionally morbid, and always amazing ones that have already started to appear for The Sims 4. Rather, it was offering a way to make ghost Sims appear as if they're pregnant.

Alexis, the player who started SimsVIP back in 2011 and has run it ever since, explained to me in an email that she'd collaborated with an influential Sims modder who goes by the handle TwistedMexican online and is currently best known for maintaining a massive list of cheats for The Sims 4.

"I emailed him saying 'I wish my ghost could get pregnant,' so we tested the buff cheats (he found) to see if they would actually have a baby," Alexis, who asked I only use her first name, wrote. "No baby, but they do get pregnant. For me, as a storyteller in my game, that was better than nothing."

From Alexis's perspective, the cheat is valuable for the type of Sims players who like to capture their gameplay and turn it into pieces of standalone fiction. She acknowledged that it's not as robust as a proper mod ghost pregnancy which will undoubtedly come to The Sims 4 at some point, and told me that TwistedMexican is already toying around with additional tweaks and cheats related to it. But when I first asked if she considered the cheat a half-measure to tide over people who felt nostalgic for ghost babies until a full mod arrives, she was firm on one key point: ghost Sims definitely become pregnant, in some sense of the term,when using this cheat.

I pressed her on this point a bit, and she ultimately conceded that what actually matters, from her perspective, is "how players want a ghost to look pregnant, even if they're really not."

"It's the illusion that's helps storytellers and 'normal' players get a little extra out if it," Alexis concluded. 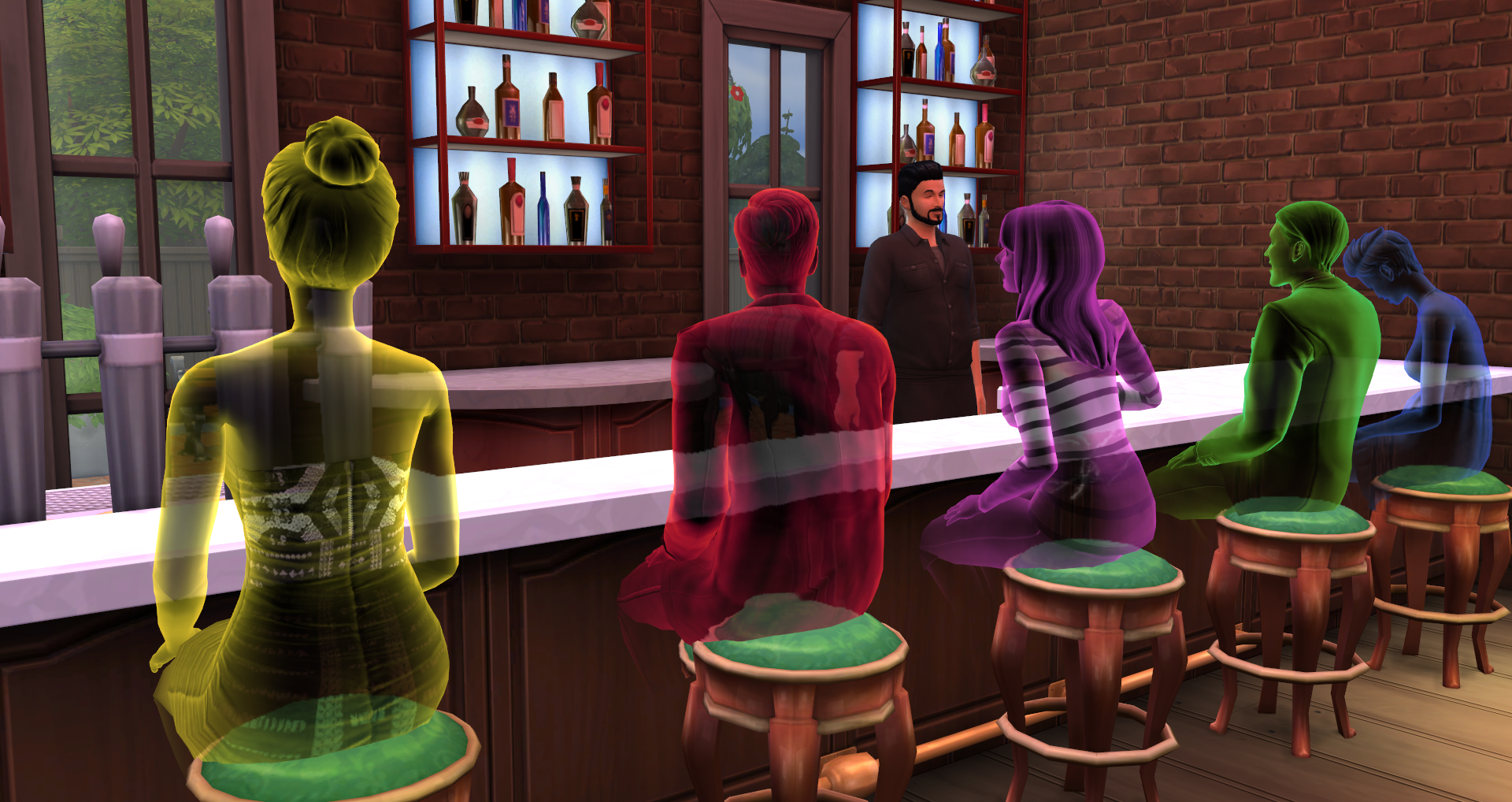 She also forwarded me a message from TwistedMexican in response to my original question about the legitimacy of ghost Sim pregnancy. Since he's more technically proficient as a programmer and modder, Alexis suggested that he could better address the question of whether or not their cheat "counted," so to speak:

Actually I believe the actual pregnancy is rolled as part of the Try for Baby Interaction. The data is then tied to that sim via a pregnancy tracker. The reason I believe it's rolled at the conception is because the tracker is also responsible for things like when to switch trimesters. (hence why the buffs don't change automatically when you use the cheat - There's no data in the sims' pregnancy tracker.)

Ghosts are basically skin overlays with transparency I'm going to see this evening if I can apply it to babies. So in theory, there's nothing stopping a ghost from having a baby other than the lack of Try for Baby option when interacting with a ghost. It's just this cheat doesn't simulate a full pregnancy, just the appearance and buff of one.

In other words: ghost Sims could get pregnant just as easily as living ones. The only thing that's stopping them from doing so is the fact that EA left out the ability to perform the "Try for Baby" action in addition to good old fashion "woo-hoo-ing." "Woo-hoo" is Sims-speak for "having sex for pleasure."

What TwistedMexican is essentially doing here is breaking down the back-end details of how pregnancy functions in The Sims 4 as a way the game modifies the behaviour, appearance, and overall status of a given Sim. I'll admit, I was a little confused by this at first. Not because of the technical details he was providing, necessarily. But more generally, it was hard for me to appreciate the amount of thought and care both of these Sims players had clearly put into identifying the precise moment of conception for Sims and ghost Sims in turn.

With a completely straight face, at least. I mean, I know The Sims is a "life simulator," but it's still a video game. As long as nobody's giving birth in real life, isn't appearance the only thing that actually matters here, as Alexis suggested?

Then again, this all started because I asked Alexis and TwistedMexican a bunch of questions and started nitpicking certain points. So maybe I'm just the crazy one here. 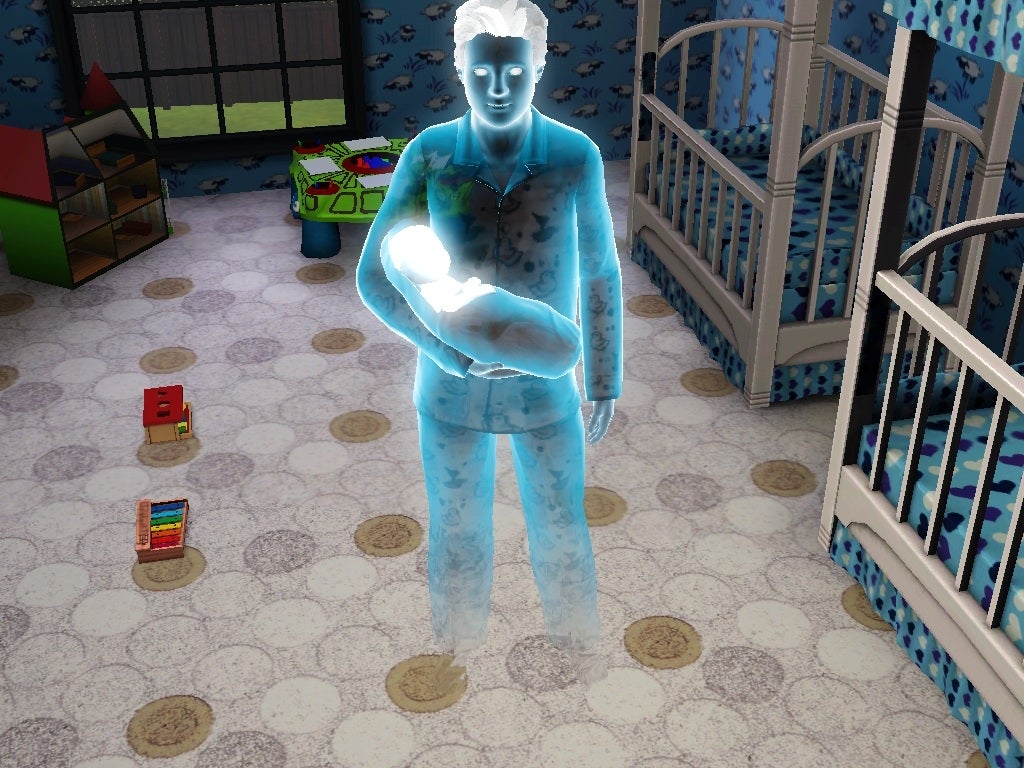 A ghost Sim, with his ghost baby, from The Sims 3.

At this point in my conversation with Alexis and TwistedMexican, I had also emailed another Sims blogger and the game's developers to hear their thoughts on the matter as well. I got a response from Jovan Jović, a player who runs another popular Sims blog Sims Community, that helped me understand the import of the matter. That is to say, he didn't agree with SimsVIP's original article at all.

"There is no purpose or a point of making them have a big belly when they cannot give birth to ghost babies," Jović wrote. "EA might give a ghost babies update, but it's just a possibility."

"Many people don't even care about Ghosts Sims not being able to have babies," he concluded. "In fact, real life ghosts function the same way: they don't age, don't die and don't have children."

I originally started following Jović's work after he wrote me one day saying that he'd uncovered a wealth of unused assets buried inside The Sims 4, the existence of which he took as evidence of another world in the game set in more of a fanciful, medieval-ish era. EA ultimately told me that the stuff he'd uncovered was simply concept art and nothing more, but he doesn't buy that. In that light, I take Jović's disagreement to be one over what he believes constitutes genuine pregnancy in The Sims — for ghosts or anybody else. If it's not something the game developers put in the game itself, it doesn't count — at least in the same way that The Sims 4's official set of features do.

Even then, though, I think his disagreement is telling in the same way that Alexis's promise that she could help other Sims 4 players impregnate their ghosts is. A lot of Sims fans have been disappointed by the new game in varying degrees because they feel it left out important stuff that made previous installments so great. Toddlers are one of the most glaring omissions for many people. Pregnant ghosts and ghost babies might be a quirky little note in comparison, but still: this is The Sims. Even your ghost Sims are supposed to be able to live full lives. The fact that ghost pregnancy might not count for some players yet and already seem like a welcome addition to others just goes to share how deeply people care about every conceivable aspect of this game and the nuances of the characters they create within it. How many other video games that portray pregnant characters could spark any sort of sensible debate about whether or not that pregnancy is legitimate?

And where does EA fall on the matter as, you know, the people who actually made the game and the new ghost Sims? Lyndsay Pearson, a senior producer on The Sims 4, had this to say when I asked why they'd chosen to omit pregnancy and childbirth from the new ghost Sims' feature set:

The decision for our ghosts not to become pregnant was based on the fact that we wanted them to be captured at the moment of death, just like we imagine they would be in real life. We don't see ghosts ageing, or changing, or having babies. We love that our players are trying to challenge the boundaries of our game and are creating content that surprises and delights the studio team.

"Ghosts essentially live in stasis, based on their moment of death," Pearson explained. "They do not age, progress or change, and that, of course, means they don't get pregnant"

Ok, but could they, maybe, sometime in the future — especially since some players already seem so excited at the very prospect?

"We never say never in The Sims," Pearson wrote, ending with a smiley face.

If players like Alexis and TwistedMexican have anything to say about it, I'm sure pregnancy — full pregnancy — will make its way to the new ghost Sims sooner rather than later.