PrettyGrumpyBear has been compiling a list of cool things that FNAF players might’ve missed in FNAF3. They include:

1) The pictures of Springtrap that appear randomly when you start up the game. They’re notable because they gruesomely show Purple guy trying to lift the animatronic head off of himself. There are three of these pictures, and you may never see them in your particular playthrough — I haven’t, despite playing for a few hours.

The first one is the initial picture in this post. Here are the other two: 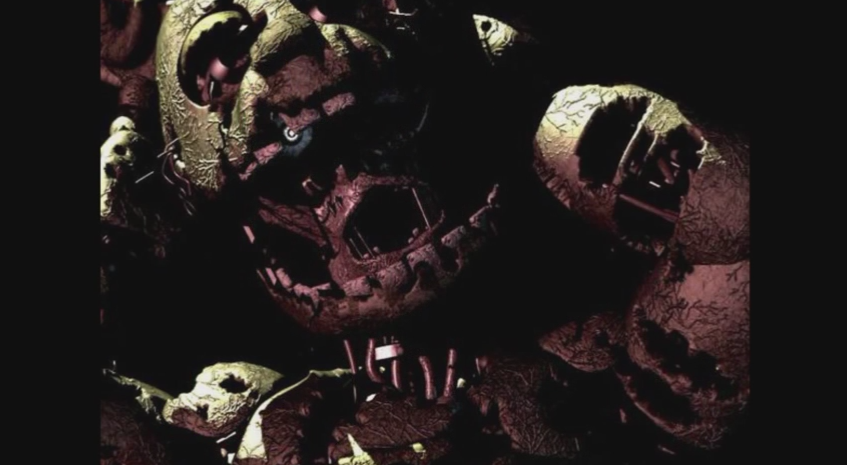 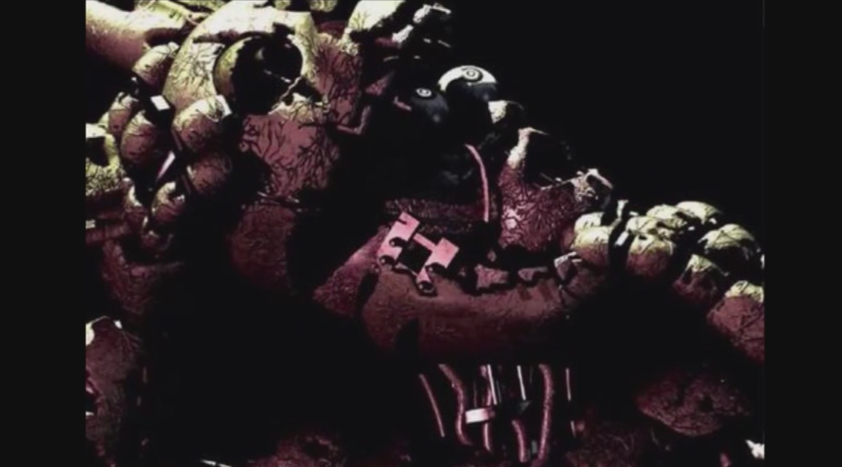 On a less terrifying note, there’s also a poster of Springtrap that can appear randomly on camera 10: 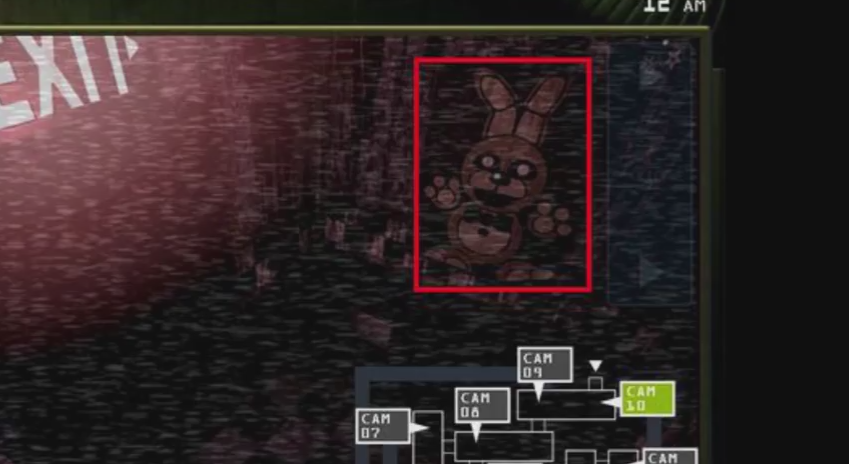 Bonus: those of you that have played the game know that Springtrap can sometimes mysteriously appear in multiple places at once. Here is Scott Cawthon, the developer, explaining this phenomenon: 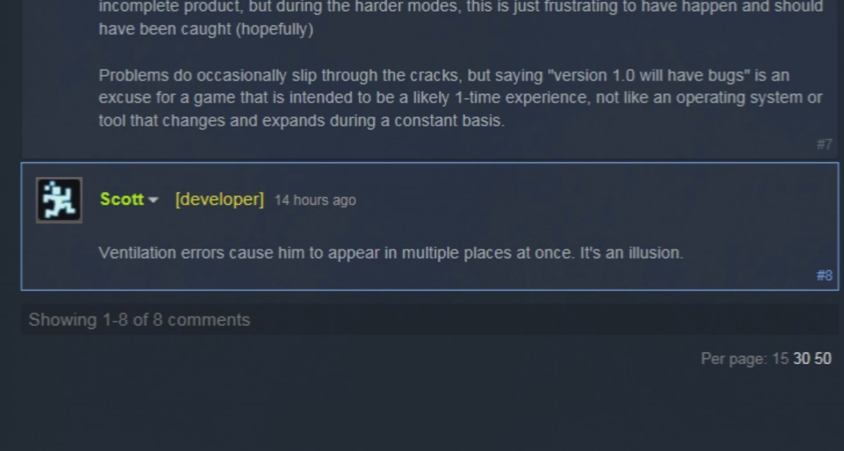 Nobody actually knows why Shadow Bonnie appears in one of the mini-games like this, or why he’s there. He’s just…there. Being creepy. Well, ok.

Sometimes, a paper plate version of Bonnie appears in your office, too: 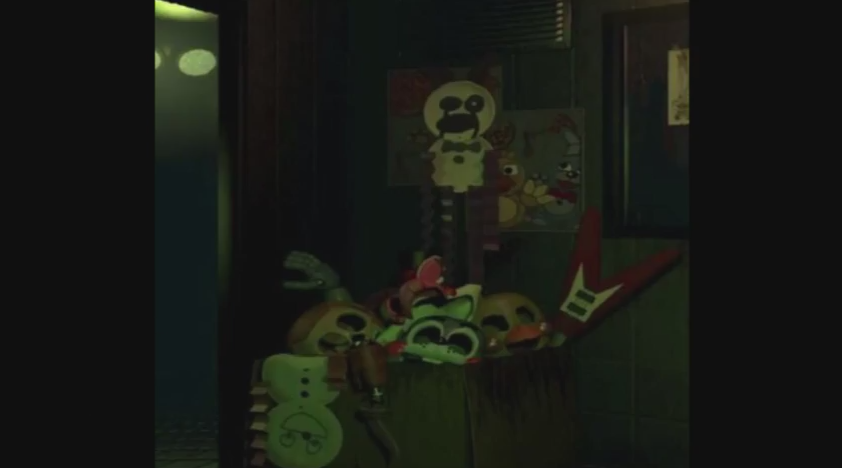 And of course, there’s a Bonnie plush right on your desk — but only on night five: 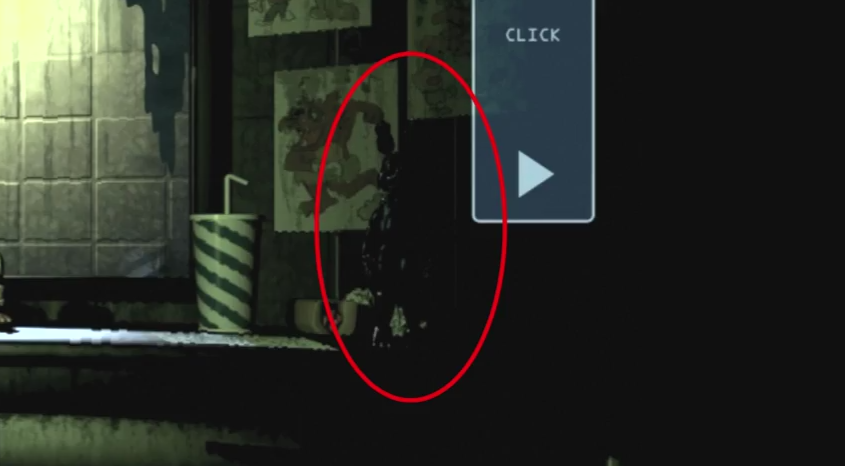 Finally, while it might be difficult to make out thanks to all the static, one of the animatronics in the left side of camera six is likely Bonnie as well: 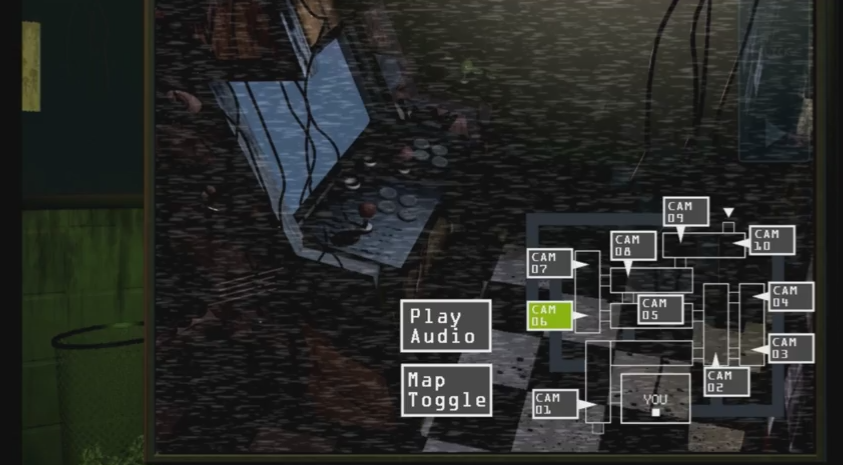 3) Golden Freddy. Yup! He’s in FNAF3, despite not actually being real — he’s likely just a hallucination. 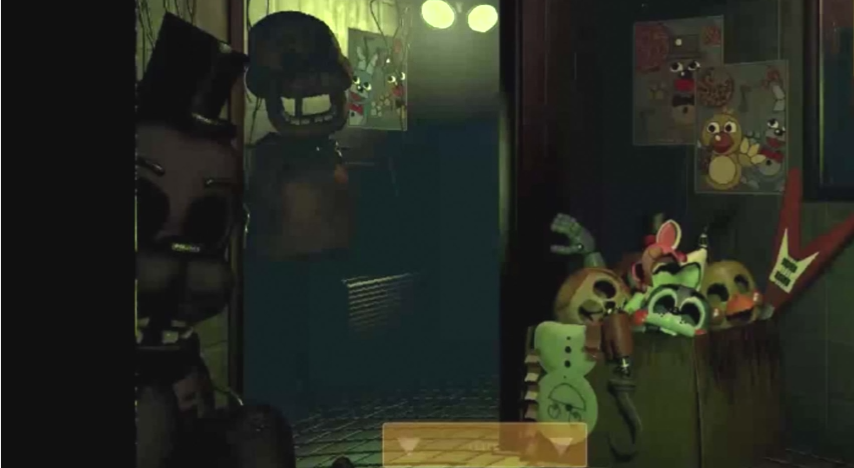 Sometimes Golden Freddy will even appear randomly in the background of your camera feed: 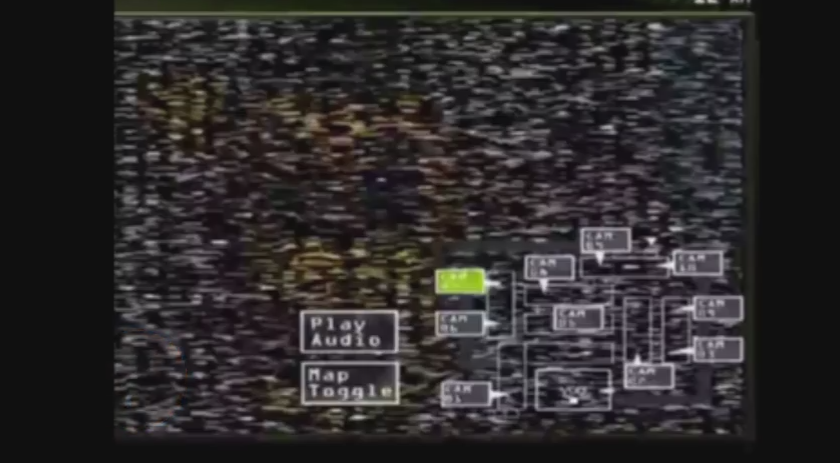 And finally, yes, you can totally click on poster Freddy’s nose in your office — it will still honk: 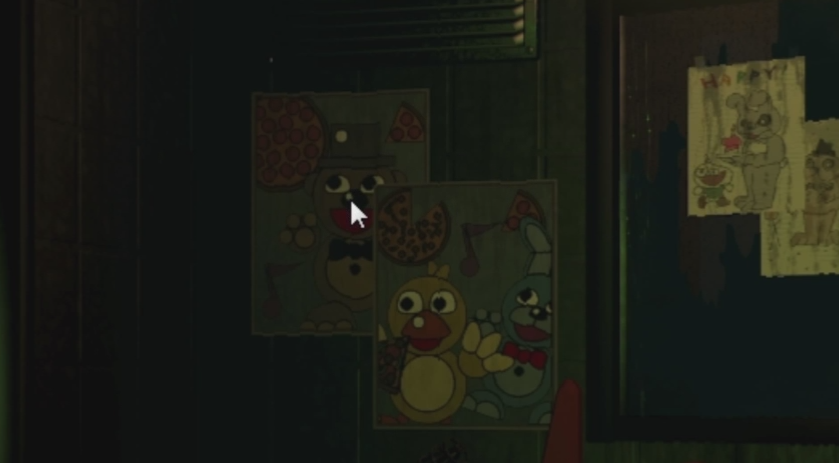 4) On occasion, Phantom Mangle will appear in your camera, accompanied with a ridiculous screech: 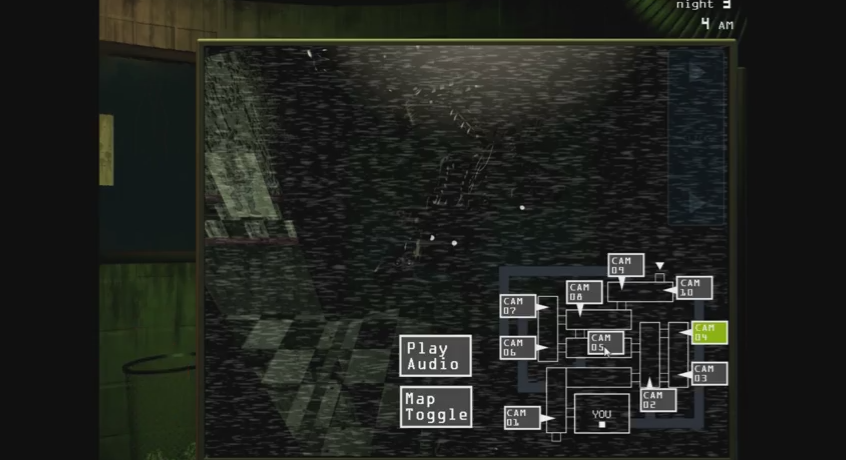 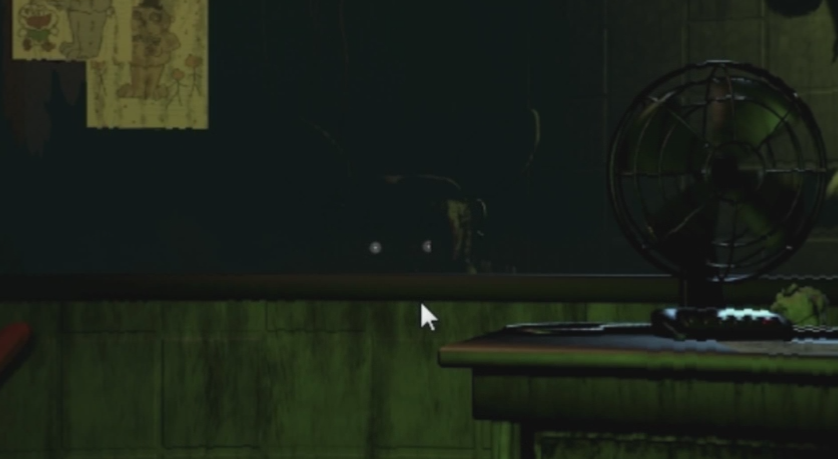 There are a bunch of smaller games within Five Nights at Freddy’s 3 — and if you want to get the good ending, you’ll need to beat all of them. 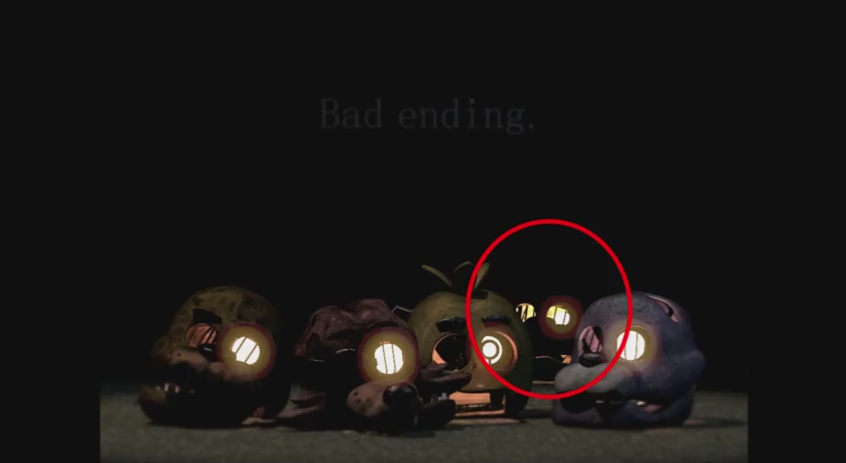 Every animatronic on this screen is an old face…save for the one in the back. Nobody actually knows who the animatronic in the back is, or why it’s there. Curiously, this animatronic is missing in the good ending: 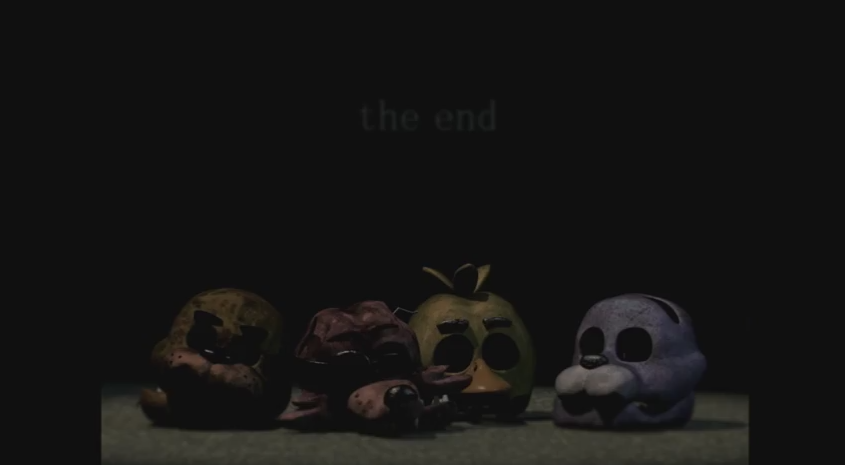 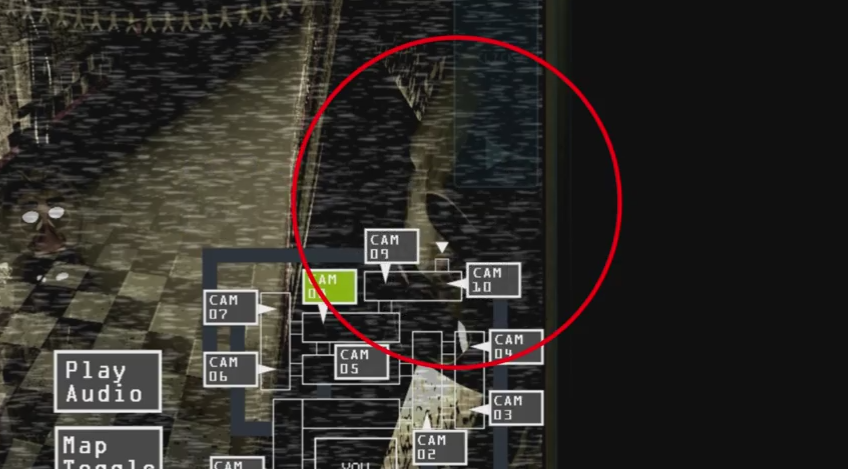 You can see this on camera eight, hanging on the right side of the wall.

Between every night, FNAF 3 throws the player into a mini-game where they are tasked with following Freddy. If the player disobeys and explores, they can walk into a room full of animatronic parts, like suits and endoskeletons. Curiously, there is also a human skull lying between all these parts — but who does it belong to? 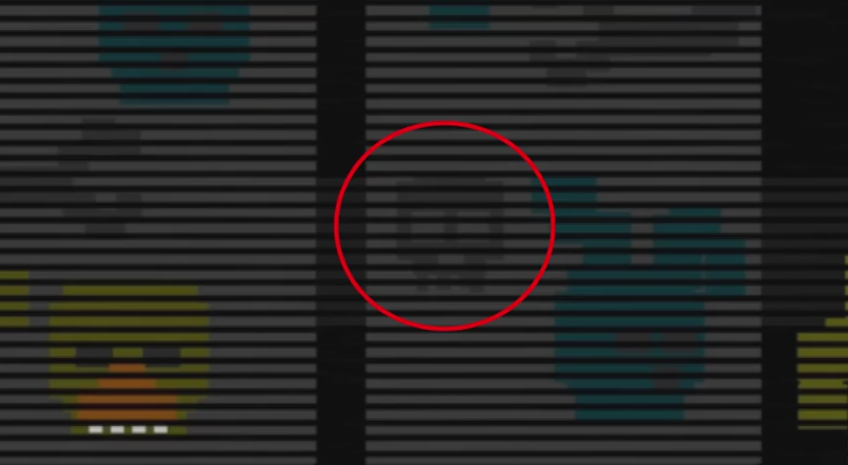 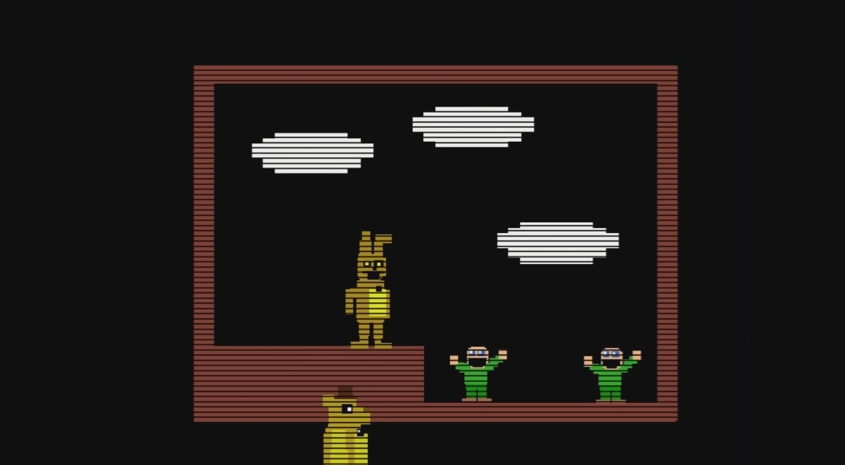 In one of the secret mini-games, there are nine identical rooms with three children each…except for one. In one of these rooms, one of the kids is missing. Oversight? Intentional? Who knows! 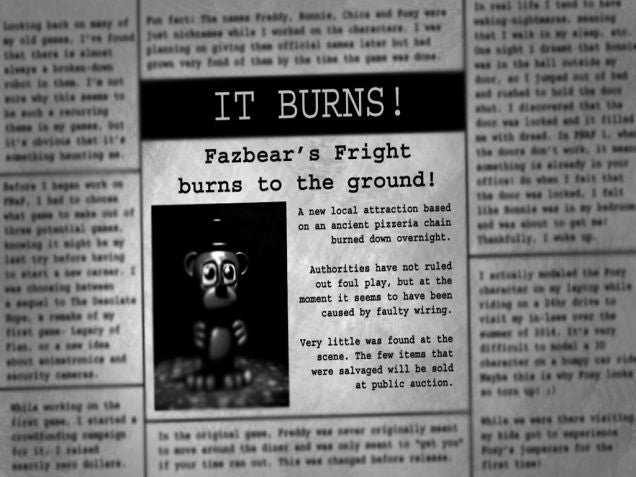 Here is something you can only see if you get a certain ending in FNAF 3. Two things make this clipping notable. One, Scott Cawthon, the creator of FNAF, has written all sorts of cool factoids about the franchise on this. It’s a bit hard to make out, but the panels say the following:

Looking back on many of my old games, I’ve found that there is almost always a broken-down robot in them. I’m not sure why this seems to be such a recurring theme in my games, but it’s obvious that it’s something haunting me.

Before I began work on FNaF, I had to choose what game to make out of three potential games, knowing it might be my last try before having to start a new career. I was choosing between a sequel to The Desolate Hope, a remake of my first game – Legacy of Flan, or a new idea about animatronics and security cameras.

While working on the first game, I started a crowdfunding campaign for it. I raised exactly zero dollars.

Fun fact: The names Freddy, Bonnie, Chica and Foxy were just nicknames while I worked on the characters. I was planning on giving them official names later but had grown very fond of them by the time the game was done.

In the original game, Freddy was never originally meant to move around the diner and was only meant to “get you” if your time ran out. This was changed before release.

In real life I tend to have waking-nightmares, meaning that I walk in my sleep, etc. One night I dreamt that Bonnie was in the hall outside my door, so I jumped out of bed and rushed to hold the door shut. I discovered that the door was locked and it filled me with dread. In FNaF 1, when the doors don’t work, it means something is already in your office! So when I felt that the door was locked, I felt like bonnie was in my bedroom and was about to get me! Thankfully, I woke up.

I actually modelled the Foxy character on my laptop while riding on a 24hr drive to visit my in-laws over the summer of 2014. It’s very difficult to model a 3D character on a bumpy car ride. Maybe this is why Foxy looks so torn up!

While we were there visiting, my kids got to experience Foxy’s jumpscare for the first time!

And two, there’s actually something hidden in the picture of the newspaper. Turns out, Springtrap is standing behind Freddy — but you can only see him if you brighten up the image, like so: 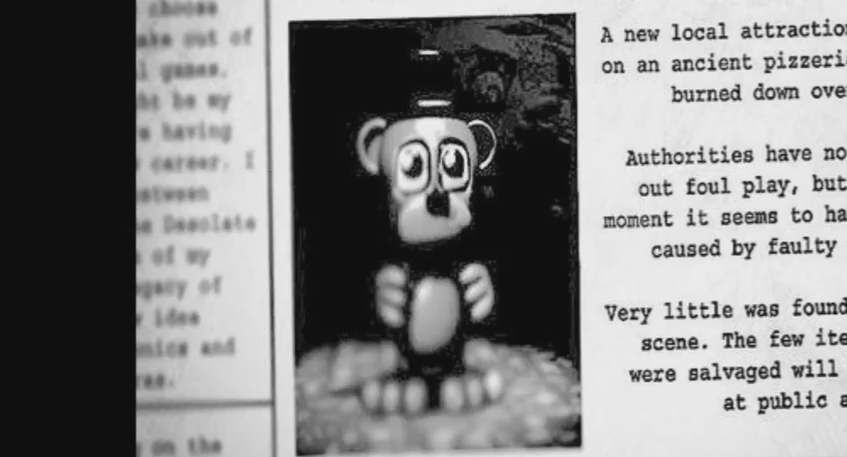 Kind of makes you wonder if this is really the end of the franchise or not. I’m sceptical.

There are a few other details hidden inside of Five Nights at Freddy’s 3, and you can watch them in these videos — PrettyGrumpyBear goes into more detail for each of them: