For almost a week now, some parts of the gaming internet have been going nuts over the visual similarities between the doctor that features in the trailer for Metal Gear Solid V: The Phantom Pain, and the controversial real-live Dr Sergio Canavero, the neurosurgeon who recently found sudden fame when he claimed that he was ready and able to perform the first human head transplant in medical history. He’s even found a prospective patient, a Russian called Valery Spirodonov, who suffers from a terminal muscle-wasting disease.

It all started with a simple post on gaming forum NeoGAF, showing this photo: 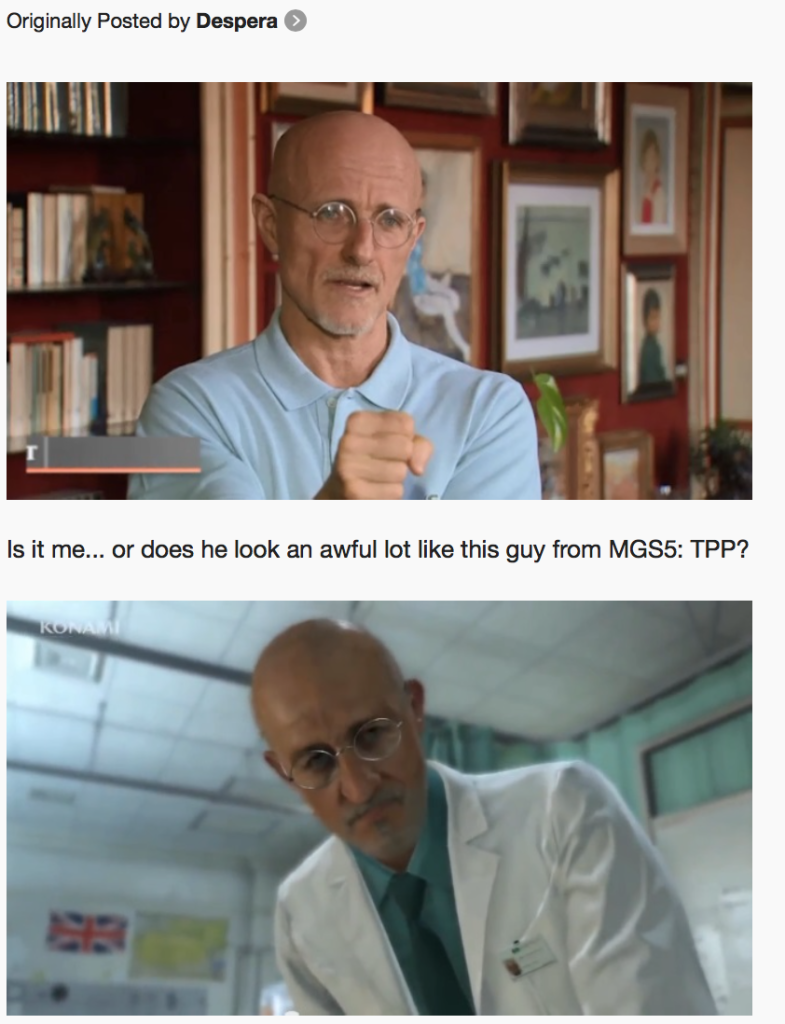 It spawned a wild chain of speculation spanning hundreds of different websites and message boards. First, posters latched onto the fact that Canavero’s head-transplant project is called HEAVEN. Then someone else remembered an old Kojima quote that stated: “The next project will challenge a certain type of taboo, if I mess up, I’ll probably have to leave the industry. However, I don’t want to pass by avoiding that. I turn 47 this year. It’s been 24 years since I started making games. Today, I got an ally who would happily support me in that risk. Although it’s just one person. For a start, it’s good.”

Some people noticed that he Dr. Canavero has written several articles on the phenomenon of phantom pain. Then there was speculation that Snake has undergone a head transplant on MGSV, or that Snake’s scar vaguely resembles the logo in the background of Cavanero’s TED talk… all sorts. It’s genuinely crazy. The below infographic from imgur gives you an idea: 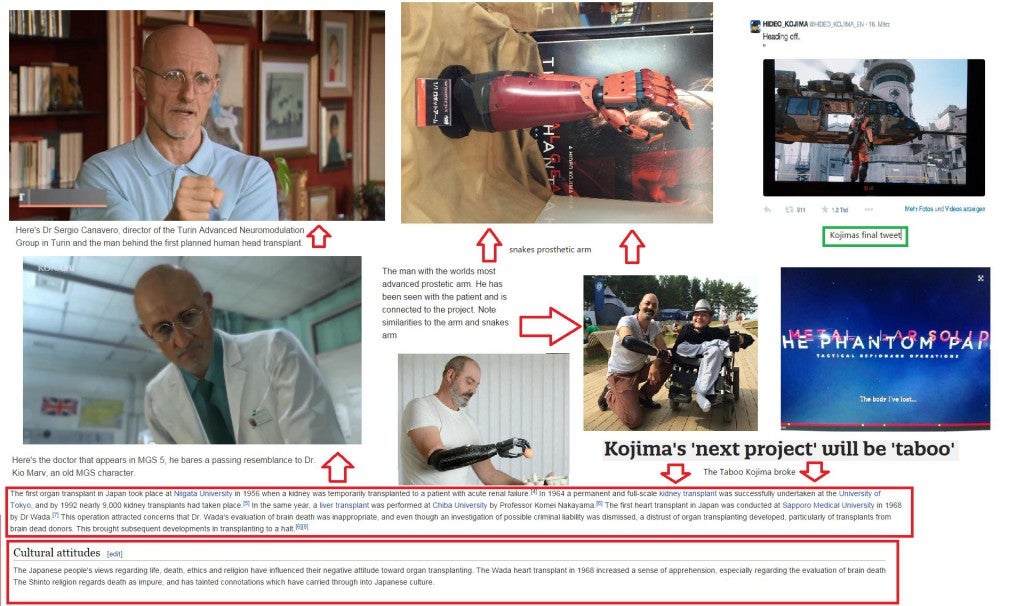 Some of these connections that people were making were pretty good. Others were more like shooting at the wall and then painting a target around the hole: like the suggestion that Dr. Canavero might even not be a real doctor, but just somebody hired for the craziest viral marketing campaign ever. Mr Canavero is indeed a real doctor who’s published more than a hundred papers, and is actually a pretty familiar face here in Italy. In 2008 he managed to wake a patient from a vegetative coma using a technique of his own invention. This was widely reported in all the major newspapers in my country because it happened right in the middle of a chain of events involvingPiergiorgio Welby and Eluana Englaro, two of the most-discussed euthanasia cases of that time.

To be clear: if this were all some crazy marketing plan, that would mean that Canavero had been taking the piss out of the entire world, including the press and the whole medical community, for over a decade. He would hardly be the world’s first fake doctor, but to plan all of that for the sake of marketing a video game? That’s too fucked-up to believe. Even by Kojima’s standards. But just to be sure, I called him up.

On the other end of the phone I found an extremely friendly person who immediately thanked me for contacting him. During our conversation, Dr. Canavero told me that he was shocked by how similar to him the Metal Gear Solid character in the videos was, from his appearance right down to the mannerisms. 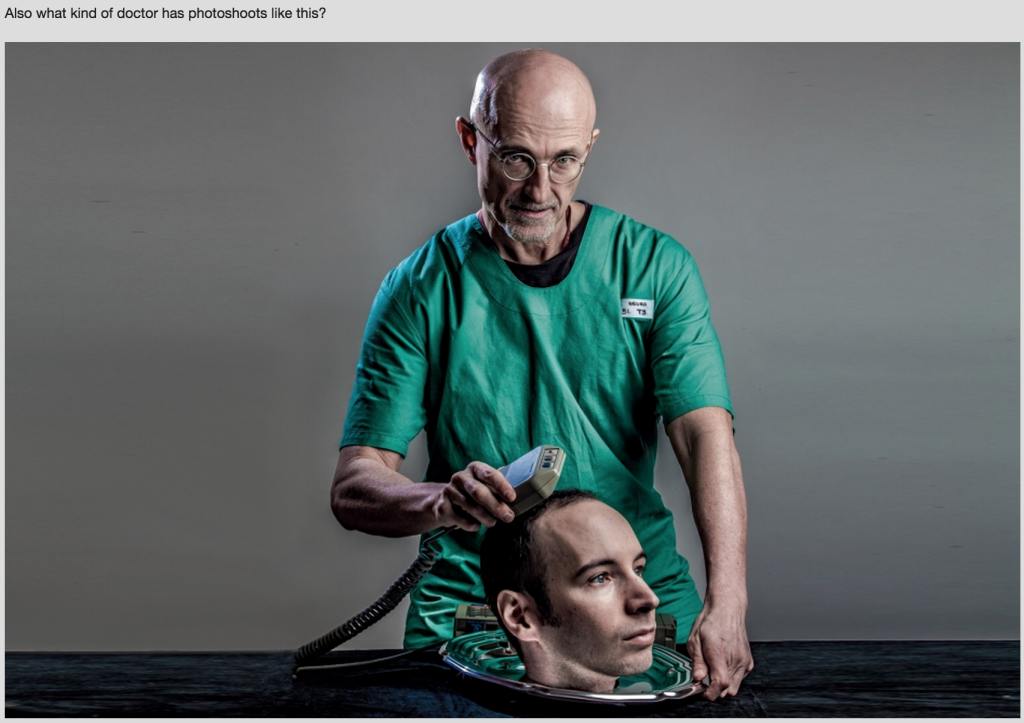 [From the NeoGAF thread.]

Random internet people have been trying to contact Dr. Cavanero for days; one Redditor managed to get a single line of text from him. He told me that he has never been in any kind of contact with Konami or Kojima, that he had never even heard of them before all of this happened and he doesn’t understand why they used him as a template for that character without asking him permission. I pointed out his resemblance to the actor from whom Konami actually did the scanning for the three-dimensional model, but he tells me that his lawyer has suggested something different that involves a conference held in Cyprus:

“One of the sponsors was coincidentally a game developer. Maybe some people there…I don’t know…maybe they recorded the thing from certain angles, maybe the cameras were set up in the right spots… I do not know. It’s just a hypothesis, but maybe it’s not too far-fetched.”

I pointed it out that this seemed rather unlikely and that there was probably a simpler explanation, but he interrupted me:

“To be completely honest with you: this isn’t such a bad thing. Since my project requires a lot of money, Mr.Kojima will be able to say he had a part in HEAVEN [the name of his head transplant procedure] despite the fact that he probably never intended to.”

Dr. Canavero isn’t just surprised by all this, but actually rather put out; he’s even thinking of suing Konami over it. “I went to the Polizia Postale [the authority in charge of this kind of thing here in Italy] and filed a complaint towards Mr.Kojima. There is also a Twitter account that is not mine, so I reported this to the Police too, they will now investigate both the matters. In the meantime my lawyer is sending a letter to the Japanese company [Konami] to ask for compensation [for using my image without permission].”

He mentioned this more than a few times during our phonecall. He also seemed very interested in how much Metal Gear Solid V might be worth. At one point, suddenly asked me: “By the way, do you know how much this game is going to cost? And how many copies will it sell?” When I estimated that it will sell maybe 4 million units at 60 euros a pop, he started laughing.

“Wow!!! Sixty Euros? Multiplied by 4 or 5 MILLION? That would cover the whole operation for Valery and then some! We’re talking about an insane amount of money!”

Towards the end of the call we talked a lot about his HEAVEN project. Dr. Canavero really is one of the most passionate people I’ve ever talked to. He couldn’t wait to explain things to me — things that I’m far too medically uneducated to understand. I definitely got the impression that he’s rather enjoying this sudden burst of popularity. I asked him if he thought the whole situation had already affected his image or had any repercussions.

“It’s just surprising that despite having been around the world, speaking at more than 300 medical conferences about what could be the biggest medical achievement in history, I feel like now I’m at the peak of my popularity thanks to a video game… a video game I wasn’t even involved in to begin with.”

Gabriele Galliani is an Italian journalist who writes for Official PlayStation Magazine, Byte Size Impressions and more. Find him on Twitter.