Overwatch Fans Have Turned Tracer Into A Completely Different Character 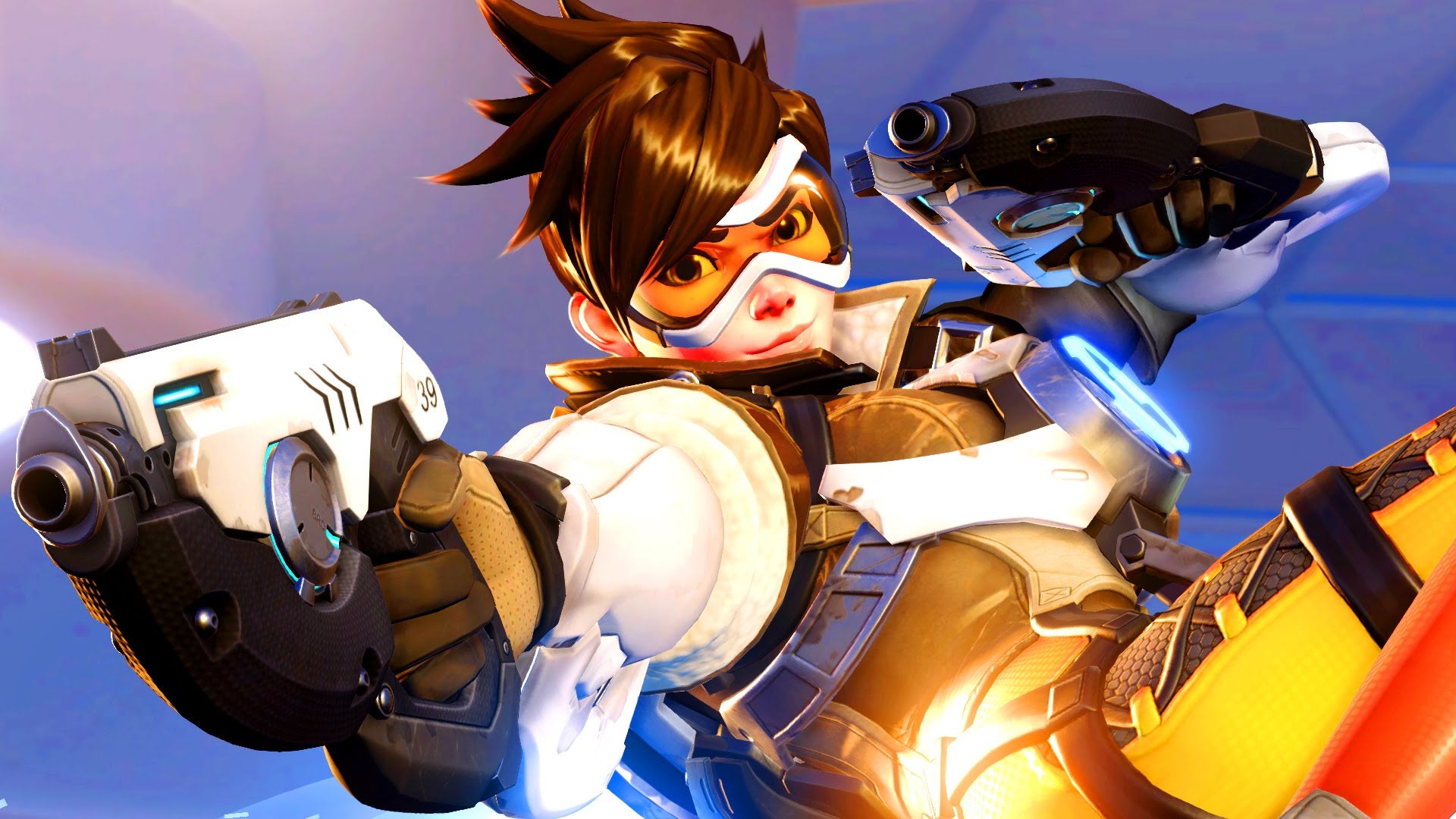 A major part of Overwatch's appeal is character personality, but not because they're overflowing with it, per se. Overwatch's characters are colourful vessels for players to inhabit, foundations on which to build. Blizzard gives us their motivation, a bit of backstory and some banter, but players' imaginations are meant to do the heavy lifting. Unsurprisingly, Overwatch fans churn out art, fan fiction, video, and, of course, porn like their lives depend on it. Tracer is an especially interesting case in that she's more or less Overwatch's mascot. She's everywhere: In ads and CG videos, on the game's cover, in the walls, right behind you, getting closer, gone again. She's peppy and fun, but also courageous and badarse.

In creating their own works involving Tracer, fans have turned those characteristics up to 11. Some depict her as childlike, naive and carefree. She can even be kind of a doof, a punchline. Others are obsessed with her rivalry with Widowmaker. You might (NOT) be surprised to hear that a shitload of people ship them. And then of course, there is The ButtTM. In that respect, Tracer is Overwatch's most prominent example of Blizzard and fans' visions diverging.

Among all the fan interpretations, though, there are clear trends that emerge, bits and pieces that become broadly accepted to the point of forming their own sort of sub-canon. Let's have a closer look at Blizzard's canon and fans', well, fanon.

Tracer is 26, and her real name is Lena Oxton. She's from London, England and was part of the heroic Overwatch organisation until Shit Went Down. She was picked to test a teleporting aircraft, but it malfunctioned, sending Tracer spiralling out of the space-time continuum. Fortunately, Overwatch's own Deus Ex Monkeyna Winston invented a device that bound Tracer to this reality and gave her cool time-warping powers. Now she fights to right wrongs and annoy the crap out of Reinhardt players.

In-game, she's depicted as almost irrepressibly cheerful. She's constantly laughing and quipping. She'll even banter with herself if there are two Tracers on the same team in a match, wondering aloud if her chronal accelerator is malfunctioning. "I was wondering the same thing," says the other Tracer in reply. "Whoa, spooky!"

Tracer is best friends with Winston because he, you know, saved her life. They're a team, and they run operations together while bantering about bananas and peanut butter. Tracer's nemesis, meanwhile, is Widowmaker, a dynamic that played out in both Overwatch's announcement cinematic and the recent short movie, "Alive".

In the latter video, Widowmaker could've killed Tracer at the end, but she opted to walk away instead. HMMMMM. This brings us to the fan portion of the proceedings. 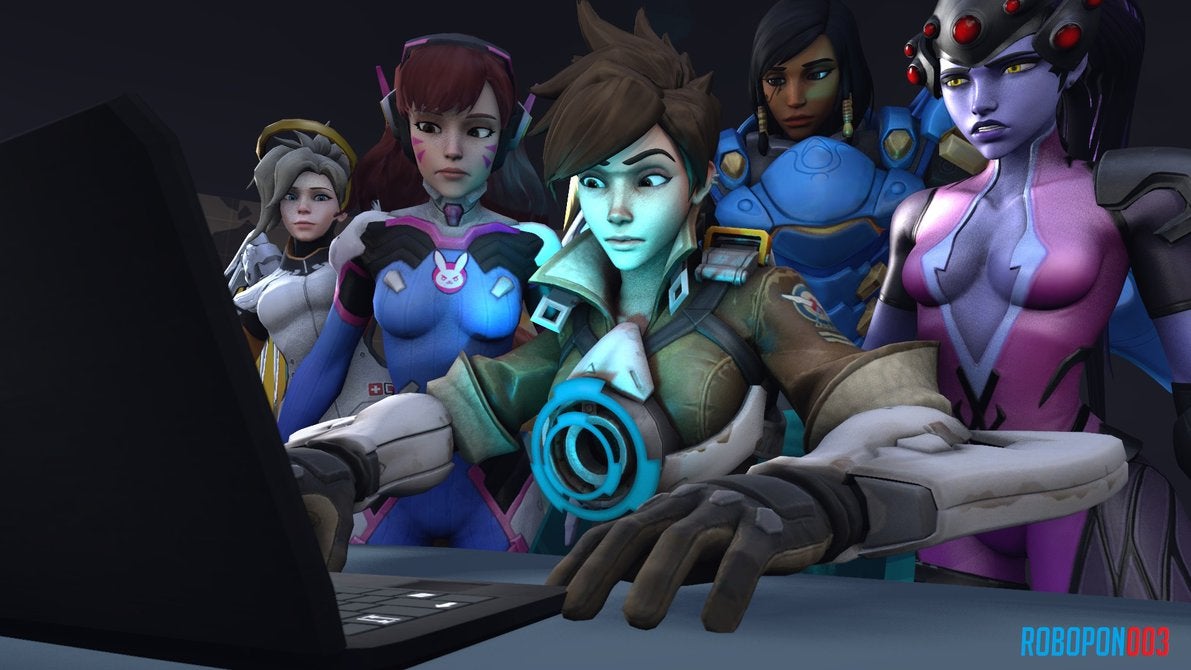 While every fan interpretation of Tracer is a little bit different, there's definitely a sort of consistency that forms the bedrock. Depending on who you ask, Tracer is...

Tracer usually acts all happy-go-lucky, but she's been through some shit. People have taken to writing short stories about how that's affected her.

Also worth noting: A lot of people — especially in fan fiction-focused communities — refer to Tracer and other characters by their real names rather than their call signs. Tracer is Lena, Widowmaker is Amélie and so on. It's all very intimate, like people are talking about their friends, or people they really want to be friends with.

Just because Tracer is fun and silly doesn't mean she can't also be badarse when the pressure's on.

"Just because you have the opportunity to kill someone doesn't mean you have to do it, Assassin."

But also a slapstick humour punchline

She is, however, kind of a doof, and some of the best Overwatch fan creations play that for laughs.

Madly in love with Widowmaker 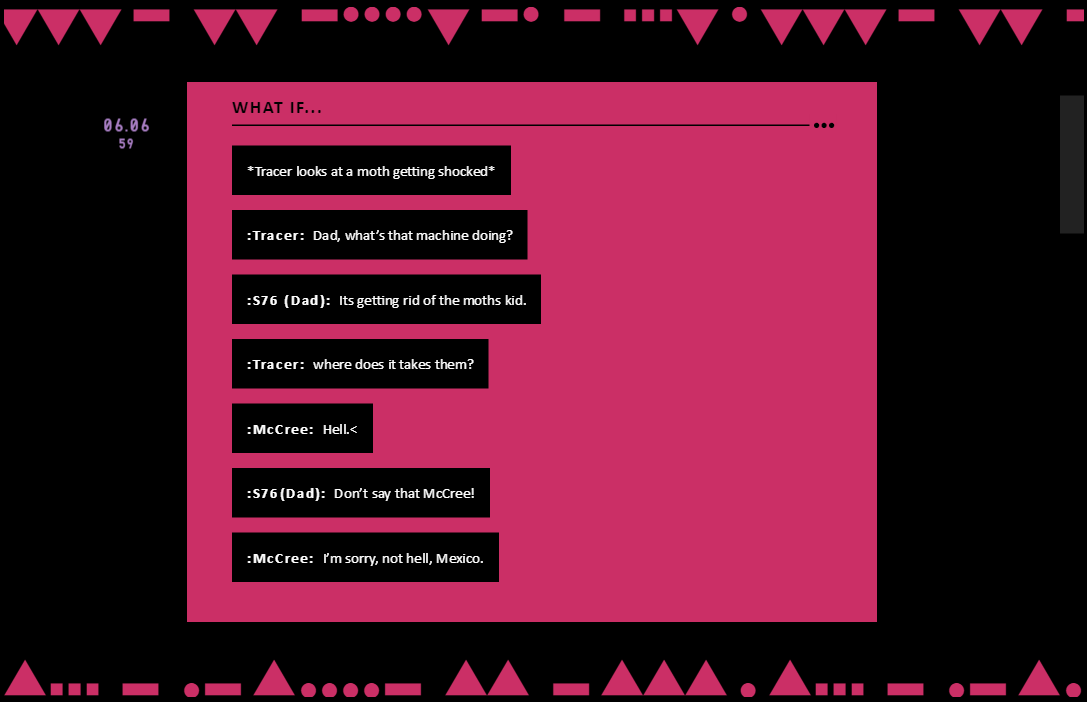 People put a lot of thought into this, apparently. Tracer's also been depicted as a cat. 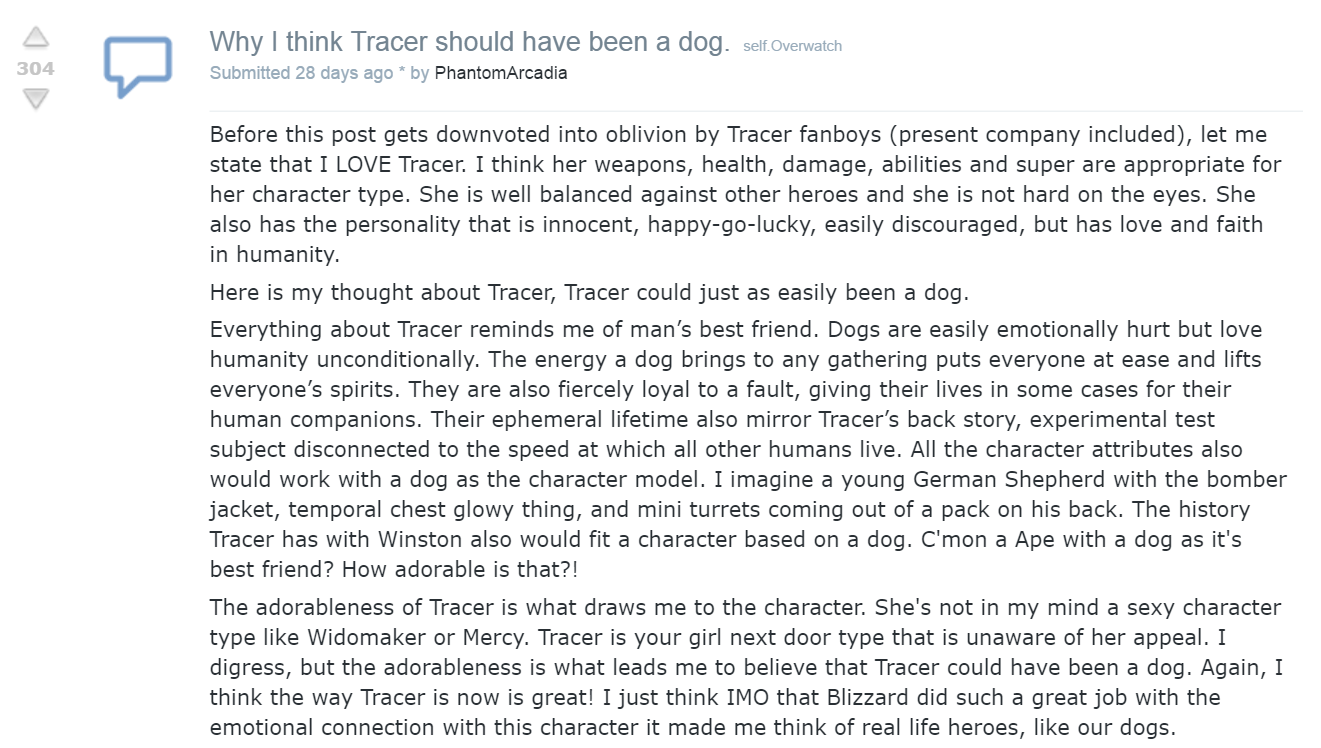 Anything I missed? Or do you want to share your own take on Tracer, be it short fiction, art, a video or anything else? Let me know below.