Crypt Of The Necrodancer Speedrunner Makes Near-Impossible Run Even Harder, Pulls It Off 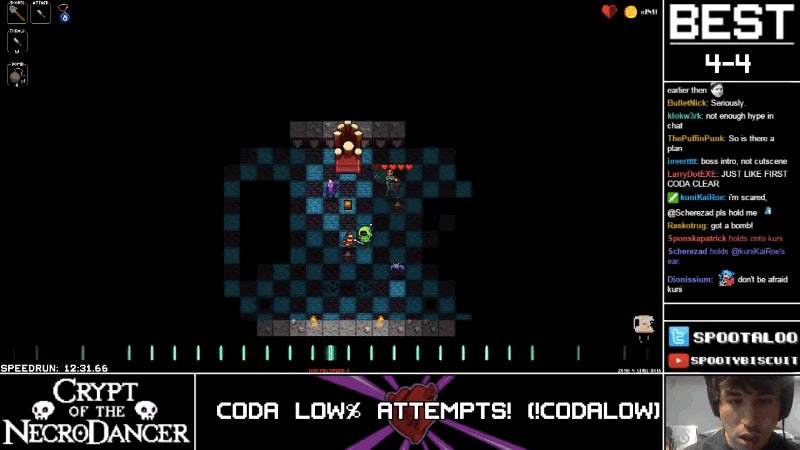 Crypt of the Necrodancer is already tough, but what speedrunner SpootyBiscuit recently pulled off is remarkable. No one has done it, and not even the developers can really believe it happened. You choose from a variety of characters to play as in the rhythm-based Crypt of the Necrodancer, each giving the player slightly different attributes. Some give you benefits, such as allowing the player to move against the beat of the music, while others make the game harder, such as instant death upon collecting gold.

Coda is on another level, though. I'll let programmer Ryan Clark explain.

"You die if you miss any beat," he said, "you die if you touch any gold (and gold is dropped by every enemy), you die if you get hit at all, you are stuck with the most basic weapon in the game, and the entire game runs at double the usual speed. That means for a boss battle like 'Death Metal', you have to move at 350 bpm (the track is normally 175bpm, but for Coda it is doubled) so you have to make almost 6 inputs per second while playing flawlessly."

"I honestly thought that I was being kind of a bastard and that no one would ever beat it," he said.

It's not like Clark is bad at the game, either. Clark managed to hold the world record for the main character during most of the game's early access run, despite players constantly nipping at his heels.

"I have complete knowledge of how the game works," he said, "because I designed it and can see the source code. Despite these advantages, Coda is unbeatable for me. I named the achievement for beating Coda, 'Impossible, Right?' because of this."

To date, only 14 people have beaten the game with Coda — 12 on PC, two on consoles. Speedrunner SpootyBiscuit pulled it off in front of 100,000 viewers during Awesome Games Done Quick earlier this year:

"It happened at 7AM my time, and I was in bed watching it on my phone with my two kids," said Clark. "It was a very surreal experience!"

But that wasn't enough for SpootyBiscuit. Instead, he started focusing on a variation of the Coda run with low%. In order to pull it off, that means the player cannot pick up any items. No bombs, no rings, no spells. Nothing.

It shouldn't be possible, but then again, we say that about speedrunners all the time. If you tell them it can't happen, they will find a way to make it happen. And after loads of trial, error and failed runs, SpootyBiscuit recently pulled it off.

Incredible! Here's what it was like when the credits finally rolled:

"He has defeated my game utterly," said Clark, "and I couldn't be happier about it."

For the moment, SpootyBiscuit is taking a break. But like any good speedrunner, he's also pretty sure he could get his time down. Good luck, SpootyBiscuit.