Gandhi Is Still An Arsehole In Civilization 6 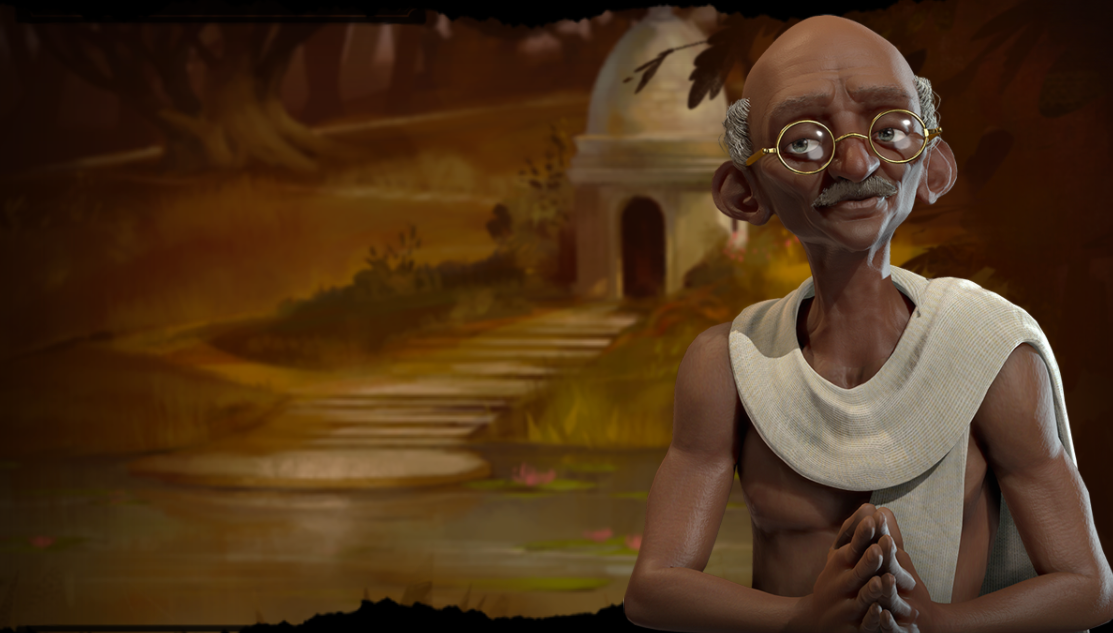 Gandhi’s been a notorious arsehole in Sid Meier’s Civilization, first as a result of a bug and later because that bug was hilarious. Seeing the leader, a longstanding image of peace and pacifism, threaten players with nuclear weapons is a staple of the franchise. It’s not surprising that Gandhi is still an arsehole in Civilization 6, but he’s a different kind of arsehole this time around.

Look at this smug fuck.

Civilization 6 introduced a new Leader Agendas mechanic, which are boilerplates for how AI leaders behave. Cleopatra, for instance, likes other civilizations that have strong militaries and will try to ally with them. Queen Victoria favours civilizations with cities on her continent and will try to expand to all continents available. Gandhi’s historical Leader Agenda is called Peacekeeper, fitting with his role in actual world history. He will never declare wars in which he can be branded a warmonger, and he will befriend other peaceful nations and denounce violent ones. So far, he sounds like an alright guy.

The problem is that AI leaders come with two Leader Agendas, and the second one is usually randomised. The second agenda is sometimes weighted towards a particular trait, increasing the chance of rolling it. Teddy Roosevelt prefers Environmentalist, which encourages his AI to build national parks and plant forests. Gandhi, on the other hand, tends to roll Nuke Happy.

Seeing Gandhi with Leader Agendas of Peacekeeper and Nuke Happy is very common. In my playthrough, even, he rolled Nuke Happy. 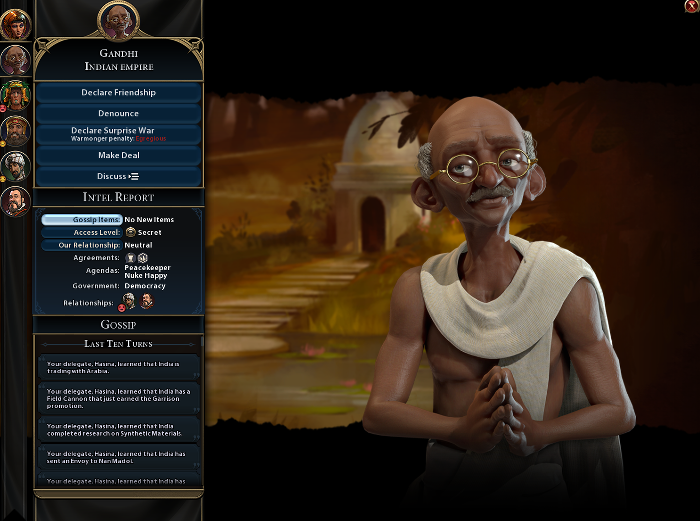 The combination of Peacekeeper and Nuke Happy has lead to some frustrating gameplay. Over on the Civ Fanatics Forum, user thecrazyscot has made a mod to remove this Leader Agenda preference, but playing the game as intended can be hilarious.

Since the aggressive nature of Nuke Happy conflicts with the pacifistic nature of Peacekeeper, Gandhi’s not just an arsehole, but a passive aggressive, temperamental arsehole. He will commend you for building nuclear weapons on one turn, and then denounce you for using them in the next. Some players will even have him ask them to join joint wars, only for Gandhi to later denounce them for starting a war.

War works a little differently in Civilization 6, and the changes also make Ghandi more of a dick. To declare war you’ll need a Casus Belli: a reason to go to war. Some of these will give you a higher warmonger penalty than others, and having a reputation as a warmonger can change your relationships with other leaders.

Early game, declaring war will give you a substantially smaller warmonger penalty than in the late game. You can even declare a surprise war without a Casus Belli in the early game without a penalty at all. The result is that Gandhi is really aggressive in the early game, meaning he starts wars without worrying about being labelled warmonger, thus keeping with his Leader Agenda of Peacekeeper.

Gandhi has moved on from being a generic, aggressive arsehole, to a conniving, scheming, backstabbing arsehole. The combinations of mechanics have created a situation in which Gandhi’s AI has almost no choice but to fuck you over. The silver lining is that Gandhi’s personality makes crushing his Civilization all the more satisfying.