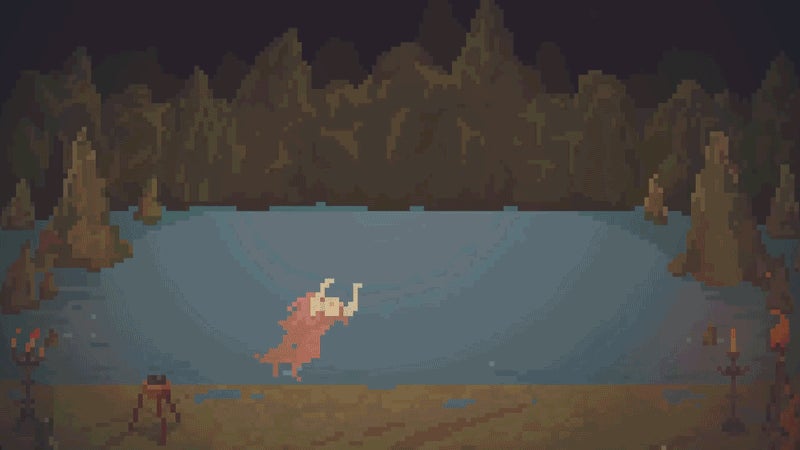 Crawl is a spooky, nasty multiplayer brawler that creates good-natured rivalry in a gruesome, 8-bit world. Yesterday it came out of early access on Steam and was released for PS4 and Xbox One.

In Crawl, up to three players possess a dungeon's monsters, while a solo player takes the role of a human. Enemies can include skeletons, dragons, flaming demons or hazards around a room such as catapults. The human defends himself across dozens of rooms in a roguelike dungeon. Whichever enemy player gets the last hit on the hero becomes the hero instead.

Later on, the hero must fight a boss, randomly a three-headed hydra, a tentacle beast, or a rocky, underground demon. Players cooperatively control the boss to kill the player. It's a constant struggle for power in which there is no punishment for losing. Loyalty is fluid. There's always someone to compete against. Games are only 30 minutes. And so, Crawl has become one of my top three party games.

A game like Crawl runs the risk of hurt feelings and bad vibes. Any highly-skilled player could monopolise the human role or deftly steal final hits. Crawl does some really cool things to prevent that from happening. One is its upgrade currency, "Wrath". When a monster other than you nails that last hit on the human, fittingly, you receive "Wrath". It's spent upgrading your monsters in between games, giving you a better chance at success on the next round. It's a pretty transparent compensation for not possessing the human and, therefore, feeling like a loser.

Also, at no moment is anyone waiting around for something to happen. Each room offers traps to possess. When the human is in the shop upgrading his items, the other players fly around as ghosts and collect coins, which can be cashed in for little ooze monsters. There's always a chance to feel like you're growing your arsenal.

Adding to the game's arcade-y feel, Crawl's art and soundtrack are killer. Manic, haunted mansion-esque 8-bit music accompanies you everywhere. Its retro art style does a lot with a little. My favourite moment is when the tentacle beast boss emerges from the water, with its bulging eyeball rolling around its head, and screams with its weird, pink mouth. The game is full of surprising, vivid moments like that. It's approachable, but refined.

Best of all, no one leaves a game of Crawl with a grudge. It's either "Let's play again" or "That was awesome." I have spent the last few years forcing all of my friends to play it. Now, my task will only be easier.