Geek Actually Isn’t Just Sex And The City For Nerds, It’s A Tribute To Real Friendship

Geek Actually is a weekly book series about women; specifically, female geeks. It follows five gals who bond online over their love of nerd culture… when they aren’t dealing with stressful jobs, sexist arseholes and Tinder hookups. It’s refreshing because it’s saucy yet relatable. No surprise, considering it’s written by four women who’ve all lived it.

“Writing is therapy in a lot of ways, and this is the first time for many of us that we’ve written for things directly in our lives,” author Cecilia Tan told me.

The book series (from Serial Box Publishing) has a format similar to a television series. It consists of 13 novelettes that are released weekly as “episodes”, written by “showrunner” Cathy Yardley, Melissa Blue, Tan and Rachel Stuhler. Currently on episode four, “The Long Con”, Geek Actually slowly builds each character’s story arc over the course of a “season”. The series itself was created over the course of a crazy three-day summit in New York City, where the authors (most of whom only knew each other in passing) spent 13+ hours a day hashing out the characters’ journeys.

“It was probably the most intense brainstorming of my life,” Stuhler said. “We’ve developed a really close relationship, the four of us. We’ve leaned on each other to come up with the best and fullest version of these characters.”

Those characters are Michelle, the work-obsessed sci-fi editor; Christina, Michelle’s half-sister who works as a film production assistant; Taneesha, a game developer who’s dismissed as a token diversity hire at her corporate gig; Aditi, Michelle’s star writer who struggles with procrastination; and Elli, a cosplayer who can’t (or doesn’t care to) keep a job. 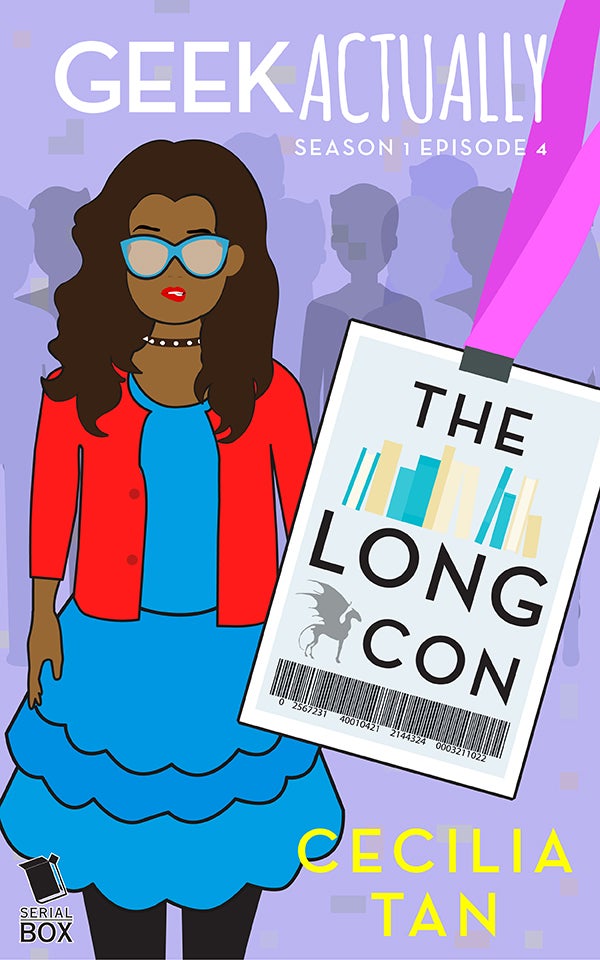 The fourth episode in the series, released today.

In mainstream media, female characters like these are mocked for liking geeky things, or they’re portrayed as doing it to get a man’s attention. For example, in The Big Bang Theory, considered the “best” example of nerdy female friendship, the only reason the women started reading comics was because their guy friends liked them. It perpetuates a stereotype that can turn this kind of fictional sexism into real sexism, as Stuhler once experienced first-hand.

“Sometimes people get this conception that women aren’t really geeks. For example, I was in a doctor’s office and I was reading Spider-Gwen. A guy looked at me and said, ‘Did you get that from your husband?'” Stuhler said. “I said, ‘No.’ And then, he was like, ‘Then where did you get it?’ I said a comic book store. It was the most foreign concept to him.”

Geek Actually‘s characters don’t come by their geeky interests because of men, but they do experience the consequences of that stereotype. The characters may like things such as Doctor Who and Pokemon GO, but they also deal with things such as Gamergate harassment and failing marriages. They have complex lives, jobs and relationships that you learn more about over the course of the series. I’ll admit it started a little slow, but the more I’ve learned about the characters, the more intrigued I’ve gotten about their stories and journeys. For example, in the first episode, Aditi (who’s married) is searching Tinder for a hook up. It’s a bit jarring, as she seems to care about her husband. But then we find out her husband is gay and their relationship is happily open.

“The initial idea was for her to be in an arranged marriage, and if we’re going to write someone who’s Indian-American, that’s kind of the go-to. And I wanted to avoid stereotypes. [We decided that] she’s a beard, but a happy beard,” Blue said. “They’re best friends, and I hope that came through. If anything else, that should be the basis of any marriage.”

But more than anything else, Geek Actually is about friendship, and how bonds can be made and kept across thousands of kilometres. All of the authors described how some of their best friends are online, having met through forums or kept in touch after meeting at conventions. The authors have even become friends with each other, sharing a Slack chat to check in about different character arcs or details, to keep continuity between the episodes.

It’s hard being a female geek — not because of what we like, but how we’re treated for liking it. Look at how some men reacted when women got their own Wonder Woman screening. Men constantly give women a litmus test for entrance into “their world”, thinking that’s necessary to keep the status quo. But the cracks are starting to show, and women are realising they don’t need a man’s approval to be a fan. They have each other. Geek Actually has been called Sex and the City for nerds, but it’s something else entirely. It’s an ode to a generation of women who’ve figured out they’re not alone.