nba 2k18reviewsports
To sign up for our daily newsletter covering the latest news, features and reviews, head HERE. For a running feed of all our stories, follow us on Twitter HERE. Or you can bookmark the Kotaku Australia homepage to visit whenever you need a news fix.

I can’t believe 2K managed to screw this up so badly.

As we’ve done the last few years, this is only a review of 2K18’s MyCareer mode, not the entire game. I think its presence as the best-known singleplayer sports RPG, coupled with the focus 2K places on it in terms of creating and selling their game, make it interesting enough to warrant this focus.

Not that long ago, MyCareer was a novelty, a feather in NBA 2K’s cap. Alone among major sports games, it allowed fans to enjoy a sweeping singleplayer story that played out through games of basketball, as you guided a young kid from college basketball all the way through an NBA career.

With hours of spoken dialogue, (attempts at) actual characters and a plot that developed off the court as well as on it, it was the perfect singleplayer panacea to sports gaming’s increasing reliance on multiplayer game modes.

Indeed it became so successful that 2K’s sporting rival EA has begun to follow suit. Last year FIFA debuted its own curated singleplayer storyline, and this year three of EA’s releases — FIFA, Madden and NBA Live — feature modes that have been heavily inspired by the success of MyCareer.

Director Mike Young gives notes to former NFL player Chad Ochocinco. (Photo via EA) Longshot, the interactive drama behind this year's Madden, tells the story of a man who tries to beat the odds to accomplish an impossible dream. The tale behind the making of Longshot is similar.

With years of experience under their belts, though, you’d think that 2K’s head start would mean they could stay steps ahead of EA’s efforts, especially given the fledgling debuts both The Journey and Longshot have endured (despite my colleague’s praise, I found the latter a hollow party game compilation that played to the most sanctimonious stereotypes of football culture).

But nope. 2K managed to mess this up. Real bad. The biggest problem, and it’s one we’ve covered already, is how MyCareer is absolutely infected with microtransactions. This is a $US50 ($63) retail video game, and yet at almost every turn the player is badgered to spend money like it was some free-to-play App Store bullshit.

The manner in which this is presented, and the extent to which previous systems and options have been pared back to accommodate it (haircuts have moved from part of character creation to a paid wardrobe item, and a lower difficulty setting has been removed), are extraordinary.

To play NBA 2K18’s MyCareer mode is to feel insulted at almost every menu screen. Fun fact: my review copy came loaded with VC. It would take someone not buying additional VC over 200 games to get to this level.

Fun fact: my review copy came loaded with VC. It would take someone not buying additional VC over 200 games to get to this level.

And yet MyCareer’s problems run so much deeper than virtual currency. For reasons that I can only see as an accommodation to the amount of Branding™ that permeates every corner of this game, 2K has decided to overhaul the front-end of MyCareer’s off-court action.

Last year, MyCareer was focused around the player’s apartment, where you would end up between games. You could walk through it and have a little shootaround, but for the most part you made all your decisions — and bought all your upgrades and customisation items — through menus. It wasn’t the most immersive thing in the world, but it worked.

This year that’s gone, replaced with a small hub world called The Neighbourhood. The idea, I’m sure, was to give 2K18 its own World of Warcraft-ish staging area, where players would love to spend time wandering around, admiring their customisation and feeling truly part of a basketball-centred world. The Neighbourhood. It's as lifeless as it looks.

The Neighbourhood. It’s as lifeless as it looks.

What they built was PlayStation Home. It’s a pointless mess that forces the player to run through a soulless corporate theme park to fulfil even the most basic off-court action. Want to pay for a haircut? Run to the barber. Want to buy new shoes?

Drag your arse over to Foot Locker. And while you’re running there’s almost nothing to do, since while the Neighbourhood is populated with other real player’s avatars, you can’t really interact with them. Who asked for this? Who looked at the previous MyCareer instalments and decided the problem wasn’t with inconsistent writing and tacky characters but … the absence of some bizarre MMO hub world?

The neighbourhood solves literally none of MyCareer’s problems and simply creates a whole host of new ones.

What needed improvement wasn’t the structure of MyCareer, but the people inhabiting it. Fans are enjoying EA’s career modes despite all their problems because folks like Alex Hunter and Colt Cruise are genuine characters, able to generate sufficient gravitas to pull the player into their story. By comparison, MyCareer’s tale has always felt a little erratic and under-developed, a random collection of sketches rather than efforts to genuinely develop a character over the course of hundreds of hours of basketball.

That carries through to this season, where with the exception of the veteran mentor on your first team, everyone else in the game is either a cardboard cut-out of a sporting stereotype or quite literally a representative of a brand like Adidas or Nike.

2K18’s chances of telling a good story aren’t helped by the two wrong feet it sets off on. Rather than earn your spot in the NBA by playing through a college career, you’re told that you’re playing as someone who quit basketball to pursue a career as a DJ, and who is able to return to the game — and the NBA itself — by playing a few street games in an amateur tournament. It undermines any sense of development, and is such a bizarre setup that the achievement the player is supposed to feel progressing through their career, like making the roster and starting their first game, is lost.

And God, the tone of it all. It’s so How Do You Do Fellow Kids. There’s all this slang and handshakes and dancing and rap references going on while 2K try to come off as baller as possible, and none of it works.

It’s like … here’s an exclusive look into the writing and environment design that went into 2K18’s career mode:

There’s literally a “thank you” message to Jordan brand said aloud during the intro without an ounce of self-awareness.

This level of advertising would be out of place at the best of times, but when you marry this with the push for microtransactions the entire MyCareer experience just starts to feel gross.

It’d be more tolerable if you could skip that stuff, but like the short cutscenes that play before and after games — where you interact with teammates and team personnel — you can’t. By the time I was nearing the end of my first season I was dreading every conversation with the team’s janitor or security guard, because I didn’t want to sit through another cringe-worthy joke falling flat, I just wanted to play some basketball. The fact you can't skip this stuff is maddening.

The fact you can’t skip this stuff is maddening.

It feels like the entire MyCareer mode this year has been built around two very bad ideas — the Neighbourhood and an over-reliance on microtransactions — and everything good about the series has been stuffed into wherever it could fit to justify them. 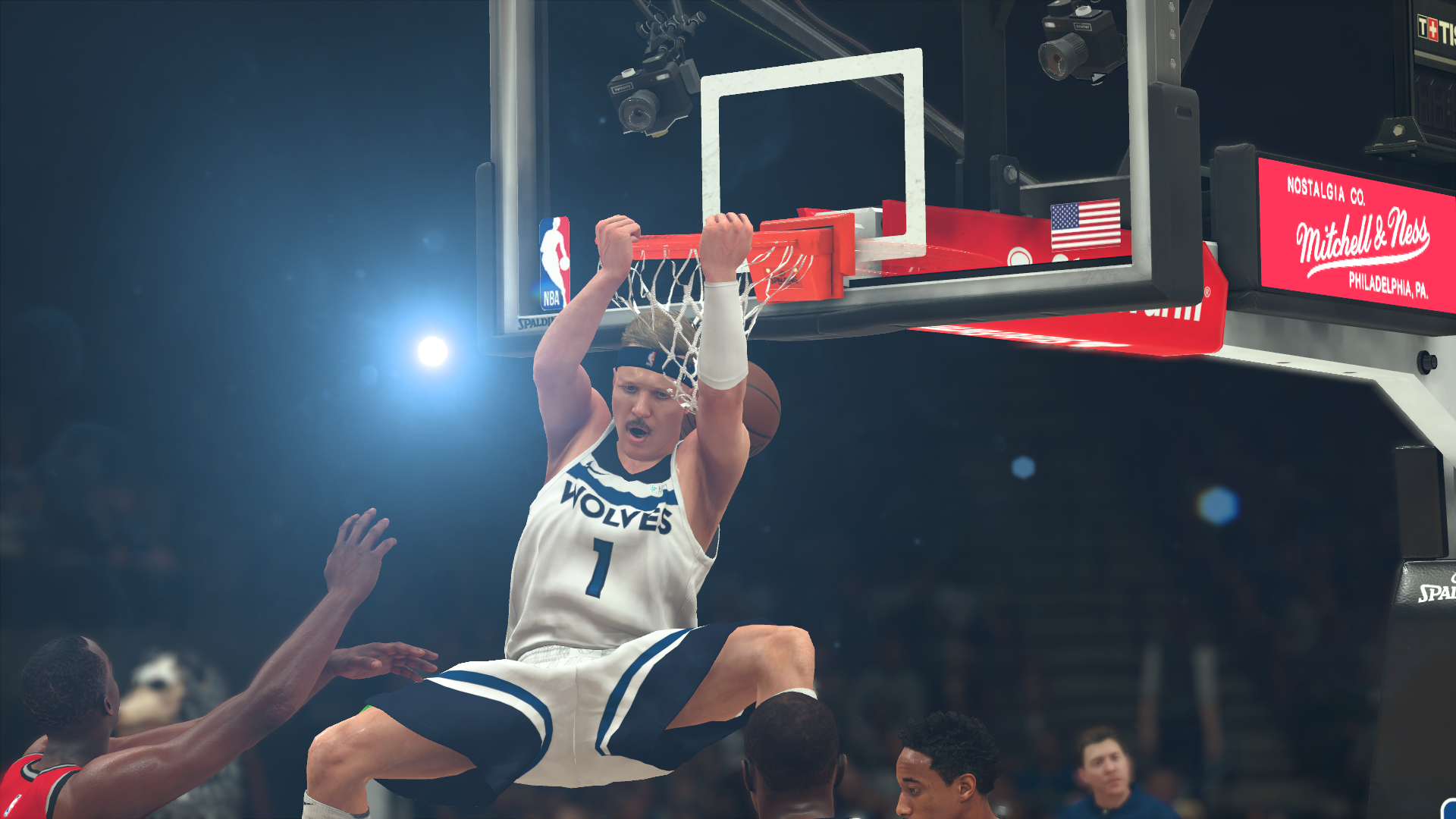 2K18 is still a really good basketball video game, so the on-court stuff is fantastic.

Every single thing that happens off the court.

It’s just so frustrating! This was once the standardbearer for singleplayer sports video gaming! It was the exact thing I thought I’d always wanted from the genre! 2K18 should have been the year 2K learned from its mistakes over the last few years and tied this whole thing together!

But nope. What we got was a confused, broken mess of a thing, which after a few years of going roughly in the right direction now doesn’t seem to know what it’s doing or where it’s headed.

What’s saddest about it all is that this is once again an excellent game of basketball. The physicality, the animation, the presentation, it’s still such a fun basketball video game to play.

My advice for those still wanting to play the game is to try 2K18’s MyGM mode, which itself now has some cutscenes and story stuff propping it up. It’s not the same, and some might find the management stuff a bit daunting, but overall it’s a far more streamlined and enjoyable basketball experience than MyCareer.

2K’s MyCareer modes have always been far from perfect. My old reviews are testament to that: they have been things I’ve loved in spite of their glaring problems, as much for their effort as their execution.

In 2K18, though, there’s so little to love that all we’re left with is the basketball (which you can enjoy in other modes), Brands™ and a mountain of problems.