Oh no, not this again.

For the longest time, if you wanted to play a proper singleplayer sports game, the NBA 2K series was your only option.

Its MyCareer mode, which lets you create a fictional player then live through their career in the NBA, helped (along with Fight Night) pioneer the idea that a sports game could do story and cutscenes just as well as action or RPG titles could.

Nope. As we’ve done the last few years, this is only a review of 2K19’s MyCareer mode, not the entire game. I think its scope, coupled with the focus 2K places on it in terms of creating and selling their game, make it interesting enough to warrant this focus.

It’s what first drew me to the series 5-6 years ago, and ever since then I’ve spent countless hours crafting my own personal journeys through the league, turning a long line of raw and untested college kids into all-stars and world champions.

Indeed like it is for many others, it’s practically the only thing I play NBA 2K for, since I’m not interested in managing a team or playing online.

This year, my guy was Benji Adebayo, a cocky but lovable youngster who, having gone undrafted thanks to some questionable personal choices, winds up toiling away in lesser leagues in pursuit of his NBA dream, first in China, then in the G-League.

I like Benji! He’s a raw talent with a good heart, somebody who is making mistakes but learning from them at the same time. After the “Poochie Design Session” garbage that was 2K18’s “DJ”, 2K19’s “A.I.” (your all-purpose nickname for commentary and cutscene purposes) is just a nice normal kid, hardly a groundbreaking template for a sports game character, but I’ll take cliche over last year’s disaster any day of the week. 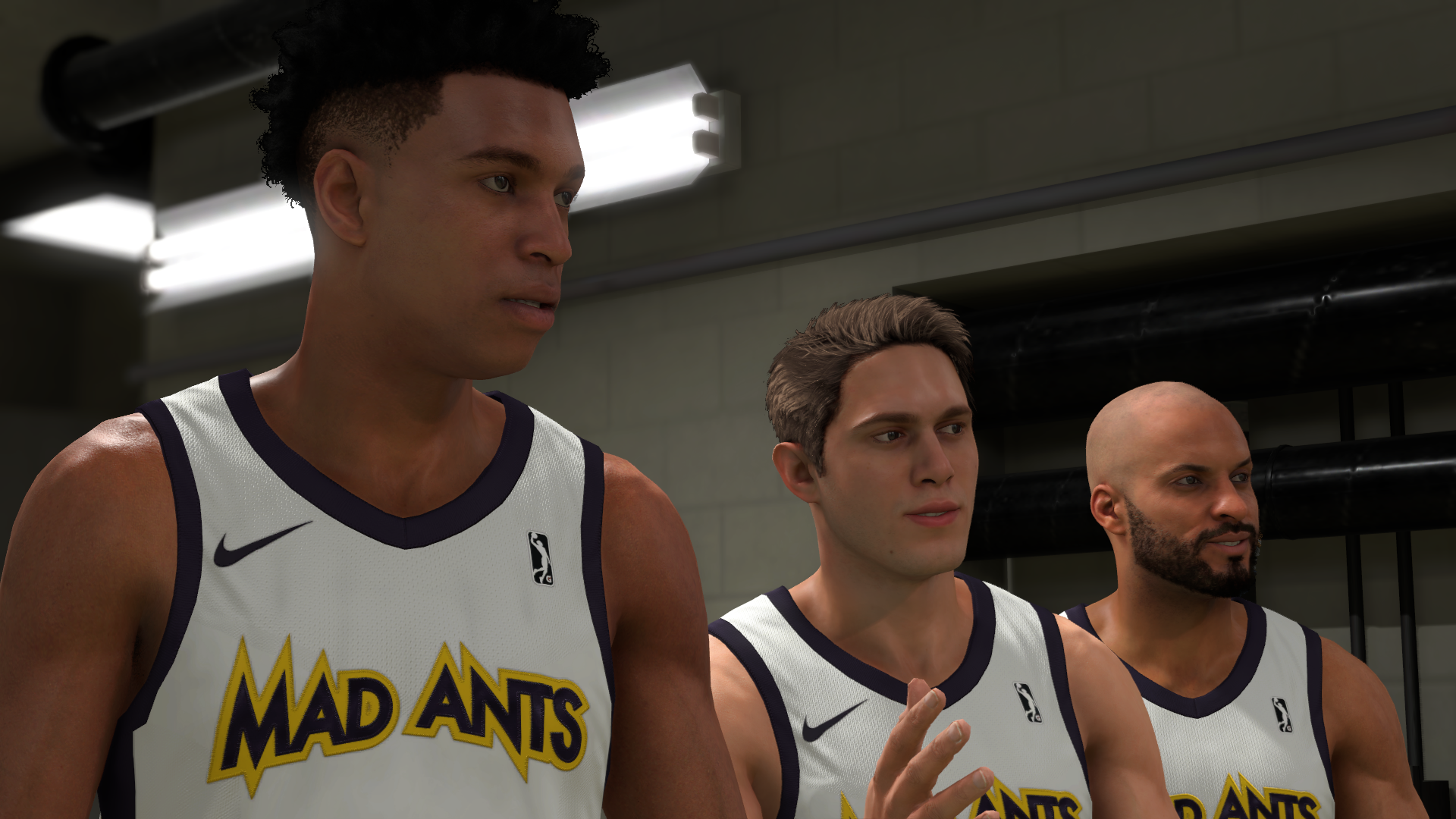 2K took a lot of flak last year over 2K18’s MyCareer, and not all of it was down to the insidious nature of the game’s reliance on microtransactions.

The singleplayer story mode itself was also deeply flawed, built on a ludicrous premise and full of grating and artificial personalities, and the inability to skip even the most pointless cutscenes became infuriating only a few minutes into a career.

In some ways, the company has responded top this. 2K19’s The Way Back, a cinematics-heavy prelude to your NBA career, gets the series back to what it does best, dropping AI into a corny little storyline about redemption, self-improvement and growth as you shed an entitled and arrogant persona on your way to getting a shot at the big-time.

There are arch-rivals to hate, small-town players to befriend, questionable hangers-on to navigate and a girl to romance, and for the most part it’s just lovely.

Loaded with cameos and with a storyline that feels like it’s actually building to something, it’s the strongest 2K plot in years. While it lasts.

The Way Back is a fantastic prelude which sets expectations that there are plotlines that will continues once you graduate from the G-League, since both your rivalries and friendships carry through there, but the second you actually make it to the NBA, even though those fictional characters line up against you in actual matches, the story dries up almost completely. Aside from the odd comedic cameo from an NBA player (most of which involve them breaking into your apartment) and stuff like shoe contracts and text messages, where you could once expect MyCareer’s story to pop up occasionally between matches as an incentive, now there’s just the grind of playing match after match, sitting through Gatorade ads and running around the game’s dystopian open world hub, the Neighbourhood.

Without a narrative to drive you forwards through an NBA career, what’s left to entice you to grind through season after season? It’s certainly not the satisfaction of player progression, which once again has been tied to the game’s insidious obsession with Virtual Currency (VC). You can practice and perform well all you like, but unlike normal singleplayer game experiences, that won’t improve your stats here.

Instead, the only way to level up in NBA 2K19 is to pump VC into your stats. And yes, you can earn this organically through hours and hours and hours of gameplay (you’ll earn a small amount of VC after every match), but much of that time will be spent toiling in the salt mines of incompetence, as your low-level player misses shot after shot and lumbers around the court like Shaq circa 2010.

2K19 is relentlessly asking you to spend VC, in every menu and in every store that litters the Neighbourhood, the hub world that connects the game’s various shopfronts.

It makes the whole game gross. Like a slick film that clings to your skin, and no amount of showering can get it off. The player is being ambushed at almost every screen, cajoled into spending more money on a game that they’ve already paid $US60 ($85), as though this were some predatory free-to-play phone game and not a AAA home console (and PC) title.

This is a singleplayer sports experience. I’m never competing against anyone, never comparing my box scores to anyone else, this is just about me and the story I’m creating in my own house in my own time. Why can’t I just enjoy the experience in peace? 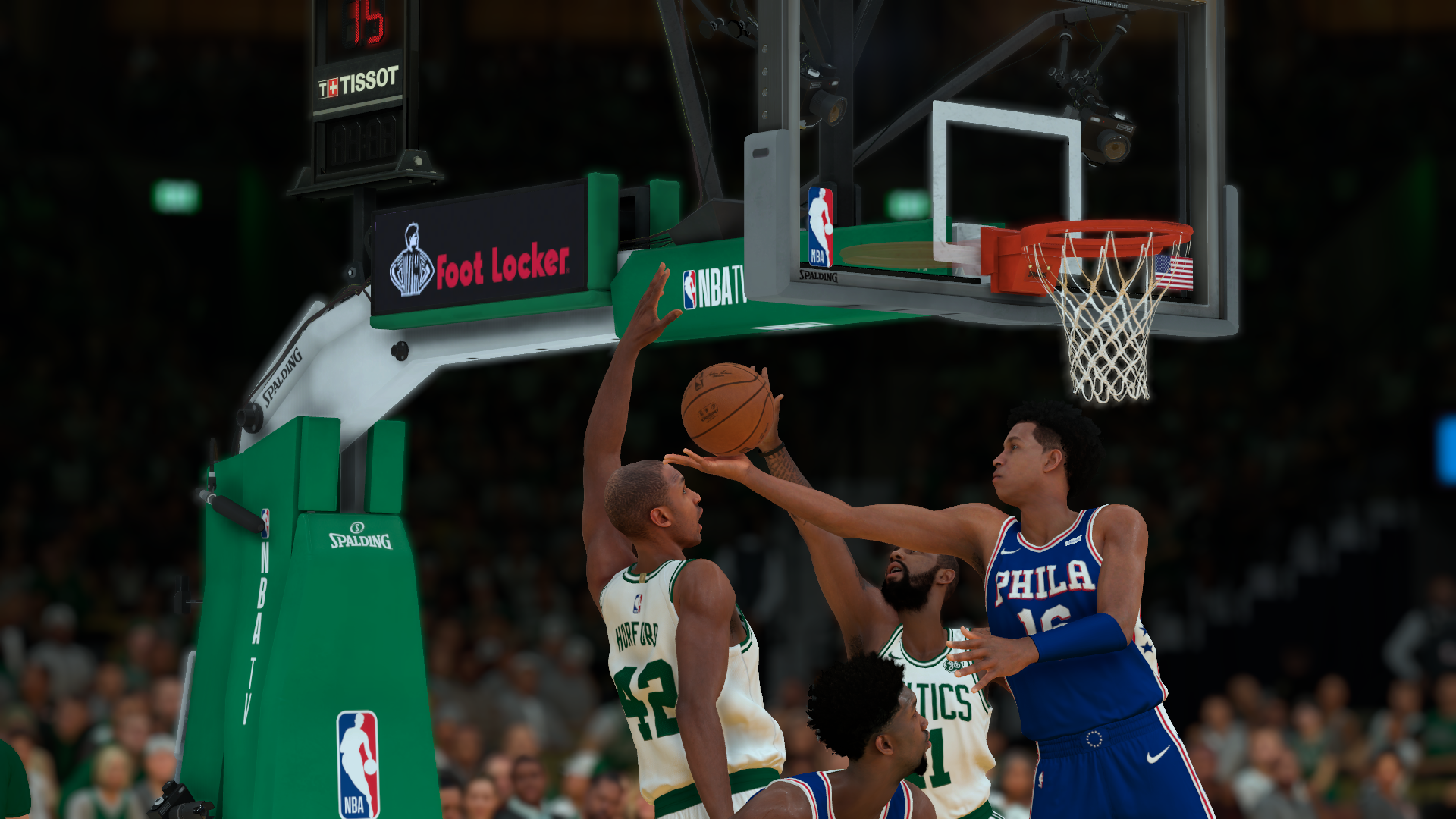 All of this extraneous drama is a damn shame, because once again the basketball on offer is great. Really great this year, actually.

There aren’t many big changes, but loads of little tweaks to stuff like layup and shot percentages, interior behaviour and defensive isolation cover make the on-court action a load of fun.

No other sports game can match the physicality of 2K19. Almost everything I love about the game is born from this: the way players move, the way collisions are detected, the ability to drive to the basket through traffic, set a screen, crossover a defender, each player looks and behaves like a giant lump of bone and flesh instead of a floaty, artificial video game man.

Matched with fantastic commentary and presentation, gorgeous visuals (at least on the PC version I played) and a raft of mostly-welcome cameos behind the mic from NBA legends, by most measures this should be the best sports game on the market.

Should be. Like, this is literally a game about being a basketball player, asking you to play entire games of basketball. If that basketball was fun, then surely MyCareer by extension is also fun.

Yet 2K19’s VC bullshit stinks so bad that it wafts over all the good stuff on the court. Virtual Currency doesn’t just suck a lot of the fun out of the game, it stripmines the experience to the bone.

The player should be at the centre of a big singleplayer adventure like this, the focus on their performances and the story unfolding around them. Instead, in 2K19 the player is reduced to a mark.

2K19’s MyCareer represents some of the very worst in exploitative, money-hungry design in all of video games. The fact it permeates a singleplayer experience so thoroughly makes this year’s MyCareer a hard pass, no matter how well the initial story is told or how much fun you have actually playing basketball.

NBA fans deserve to be treated like fans, not the target of a publisher’s petty grift.