How Beyond: Two Souls Helped Me To Share A Personal Pain

heavy rainkotaku core
To sign up for our daily newsletter covering the latest news, features and reviews, head HERE. For a running feed of all our stories, follow us on Twitter HERE. Or you can bookmark the Kotaku Australia homepage to visit whenever you need a news fix.

Every David Cage game is an experience, from the eerie Indigo Prophecy to the twisted murder mystery of Heavy Rain and the flawed but ambitious Beyond: Two Souls.

Released in 2013 for the PS3, Beyond is an interactive drama action-adventure game about Jodie Holmes (played by Ellen Page) who has supernatural powers. This is due to a connection with a spirit called Aiden that aids her throughout the journey.

Gaming, more than any other medium, has faced numerous questions about what falls under its scope. This could be seen as a both means of establishing its identity (as a medium) and also as an attempt to navigate the complex evolution inherent in its growth. Independent games constantly push the boundaries, just as older adventure games, especially ones using FMV, blurred the lines when they were at the height of their popularity (are they novel, film or game?).

A criticism I commonly see for Cage’s Beyond: Two Souls is that it’s a super long film with minimal controls. I recognise that Beyond has some big plot inconsistencies and your gameplay choices don’t impact the narrative branches as much as its predecessor, Heavy Rain, did. At the same time, there were some incredibly unique moments in Beyond that were just as powerful as Heavy Rain, and have haunted me in a way neither film nor literature could have, principally because I was in control.

In many ways, the “Homeless” chapter captures what makes the entire experience so unique and encapsulates how players are given the kinds of decisions that would be unthinkable in any other medium.

The chapter begins with a snow storm. Jodie struggles just to get to her feet and you have to pound the “X” or you’ll fall back down. Every step feels laborious and you can hear her grunting in her struggle against the cold. She looks back, eyes dismayed, movements slow, breath forming mist. It’s a long slog just to get down the street. She eventually collapses. Aiden has to get the attention of a stranger, Stan, who is searching a garbage bin for food. It’s the complete helplessness of this opening that is both so frustrating and compelling.

The character models and the facial rigging are some of the best out there (I’m super picky about this kind of stuff as it’s what I do for a living). Even when the characters walk, it’s an irregular blend of different cycles that make it seem more natural. She’ll run, then jog a little, then favour one side in the snow. The closeups and detail in the textures make Jodie and her companions feel very real.

You, as Jodie, are twice given the option to try and take her own life. First with a knife, and then by jumping onto the middle of a freeway. The despair at each moment feels unbearable, especially with the powerful acting from Page. What struck me most is that you’re even given that choice. Though the actual decision is an illusion (Aiden will rescue you if you do attempt to kill yourself), I can’t think of many games where a choice this grave is given to a player. Even when Celes jumps off the cliff in FF6, the player doesn’t have control.

In the next section, you go to the streets to beg for money. It’s freezing and your companion, Stan, informs you your goal is to earn at least five to get warm food.

You think it’s a piece of cake, but earning that five dollars is one of the hardest things I’ve done in a game. It’s sad, imploring for food, then being threatened with the police. “Get the fuck out of here,” you’re told when you beg at a restaurant for a bite to eat.

There are several optional ways of earning money. You can have Aiden bust up a newspaper dispenser and ATM for more money. There’s a really disturbing section where a man propositions you in exchange for cash. Stan’s panhandling turns up almost nothing. I felt so destitute that we might not be able to make any money, especially as Stan warns you that earning just five dollars can sometimes take weeks (there’s also a little nod to Heavy Rain with mention of the origami killer in a newspaper someone is reading). Eventually I found a guitar, played music all day, and was able to score some money.

I had never felt so happy to earn those few dollars. I honestly found this section a sad, and moving sequence, for personal reasons.

When I was 19, due to a series of circumstances outside of my control, I found myself without money, without a home, and nowhere to turn to. It was one of the most difficult times I’ve experienced and I wasn’t sure how I was going to get by. Looking back now, the shame of having to ask people for help, only to get turned down so many times, still stings. I have a hard time thinking about that period, and even more so talking about it. As I was playing through the game with my wife, Angela, it brought back painful memories, but it also helped me to articulate to her what happened back then. I know it was in the context of the game and my experience was different from what Jodie endures. Still, I appreciated Beyond for the chance it opened up and the conversation it helped me to have with her. 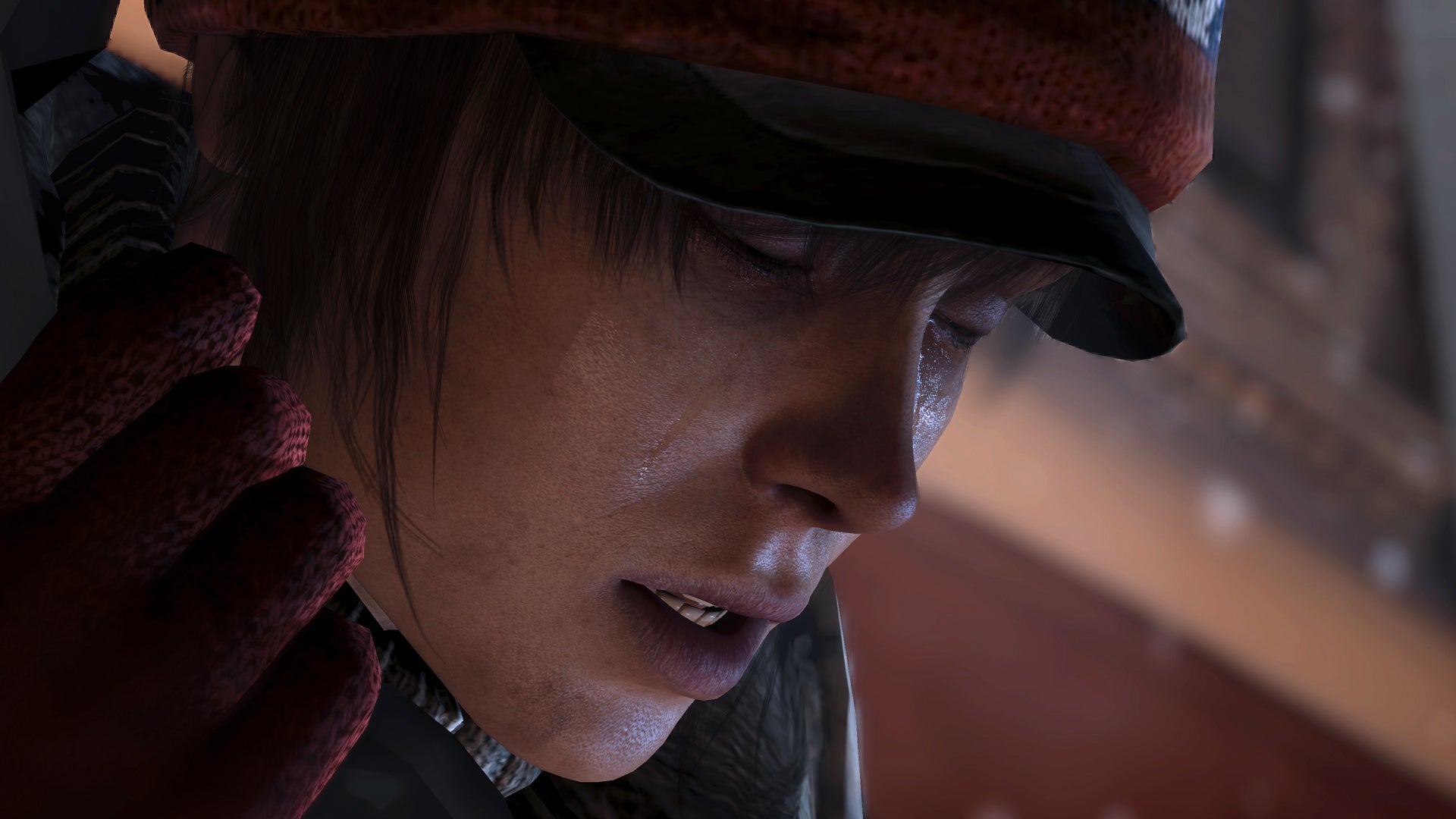 When Stan sees you’ve earned some money, I was stunned that his reaction wasn’t disappointment, but awe and excitement. Stan goes to buy some groceries. On the way out, some thugs try to rob him. I don’t think I’ve ever been so furious with enemies in a game. The assailants are recording it for some social media event, wanting to capture a beating for kicks.

Their cruelty felt unbelievable. I relished beating the crap out of them using Jodie’s CIA training.

Again, I felt immersed in the narrative. Even though it was only 15 dollars at stake, it felt more real than saving entire worlds in other games.

What follows next can either be one of the most moving experiences in a game, or an uneventful evening, depending on how you play it. You have a happy dinner and even though I couldn’t physically taste the canned tuna, I could have sworn it was one of the best meals I’d eaten. That’s when you have the option of channeling Aiden to interact with the other characters. That includes healing the physically ailing Jimmy and assuring Sunday that the baby inside her womb is fine. You can also use Aiden to link with Stan and see the spirit of a mysterious woman next to him, arm on his shoulder. Jodie, via Aiden, communicates with the woman and realises this is his wife who passed away four years ago. It’s a heartbreaking conversation that had me tearing up as I realised the tragic past Stan was suffering from.

The thing is, you can skip any, or all of the “miraculous” exchanges. It’s totally your choice.

They go to sleep and are woken when Sunday realises her baby is going to arrive early. After grocery “shopping” with Aiden’s help (which means he disarms the security cameras), Jodie has to perform several quick time events to help deliver the baby. Though the process of the pregnancy is very simplified, I can’t think of many other games in which you, as a player, have to deliver a baby.

Playing through it with Angela made it feel even more intense and I was honestly worried somehow that I was going to screw it up or push the wrong control, especially with both of us wanting to make sure the baby came out safely (she does).

The arc is amazing. When the chapter starts, Jodie desperately wants to die. By the end, she finds her will to live. I know it’s the trope of delivering a baby that gives her that will. But it’s also a journey that we, as players, share.

When I turn on a Zelda or Persona game, I know the experience will be completely different from a David Cage one. An auteur of gaming, Cage has a distinctive style that is as unmistakably his as something by Miyamoto, or in the film world, Fellini and Kubrick. Even his flawed endeavours create gameplay experiences that provide insight into the ritual of everyday life through its tragedies and triumphs. Like all rides, there are bumps, even some crashes, but overall, Two Souls remains a journey that goes “beyond” my expectations.