Earlier this week, Dr Disrespect, the self-proclaimed “face of Twitch,” returned to the streaming platform and pulled in what Twitch says was a record-breaking number of viewers. Days later, however, Dr Disrespect and previous record-holder Tyler1 are still beefing over the number, as are their fans.

It all began on Monday, when Dr Disrespect’s concurrent view count briefly exceeded 388,000. That, according to Twitch, broke the record previously held by Tyler1, a “reformed” League of Legends streamer who’s still definitely an arsehole, but whose heavily hyped return in January took over Twitch.

Twitch stated that Dr Disrespect peaked at “over 388,000” viewers, but did not provide a specific number for Tyler1. This has led to days of heated debate, because this is the internet, a dark and terrible engine powered by beefs.

The issue stems from the fact that it’s hard to get a bead on where exactly Tyler1’s concurrent view count topped off. Some reports from the day of say that it was 382,000 while others say he exceeded 400,000.

Screenshots of both totals purporting to be from that day have been making the rounds, though it’s impossible to say whether or not they have been doctored. In an attempt to settle this, I’ve been trawling through tweets and other messages from the day of Tyler1’s return, but the number totals and screenshots are just as inconsistent. 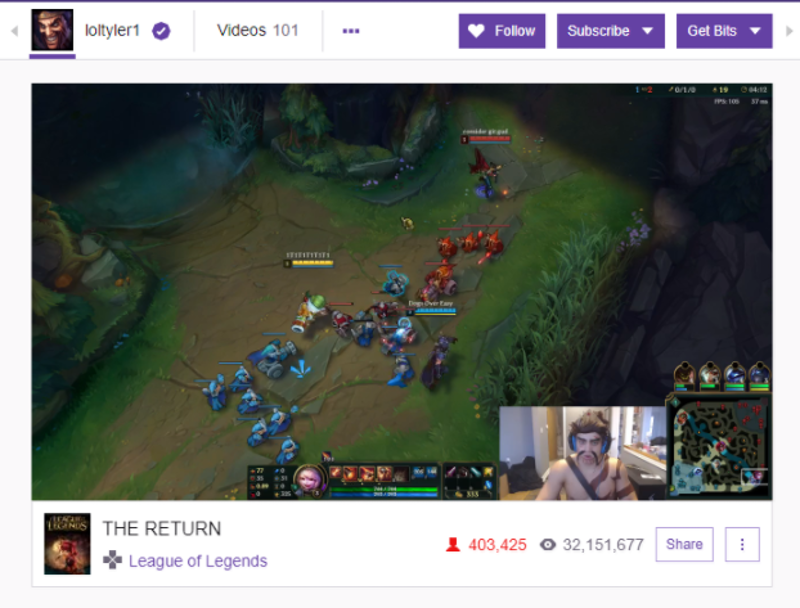 People have also cited numbers from third-party Twitch metric site Twinge as evidence that Tyler1 still holds the record, with the site recording a peak of 365,123 concurrents for Dr Disrespect and 379,678 for Tyler1. Twinge creator Justin Malara, however, doesn’t believe his own site is more reliable than Twitch’s metrics.

“We ping Twitch’s API at 10 minute intervals, so its entirely possible (extremely likely – actually) that we didn’t catch either streamer at their absolute peaks,” Malara said in an email. “Twitch’s internal measurements (I assume) update more frequently than whats available to our system through their API, so I believe their count is more accurate than ours.”

All the while, Dr Disrespect and Tyler1 have been jawing back and forth, with Tyler1 challenging Dr Disrespect to an arm-wrestling competition to be held at TwitchCon later this year.

“380k viewers, 383k, 400k viewers – what does it really matter, honestly, Doc?” Tyler1 said in a video on Twitter. “Streamers of our size? Come on, view count is just a number. But, if you want to get technical, I guess there is one way you could settle this. Why don’t we, I don’t know, arm-wrestle, TwitchCon 2018, to decide? Your move, Doctor.”

Dr Disrespect has since responded by making fun of Tyler1’s size compared to his own 6’8 frame, saying he’s not even sure how an arm-wrestling match between the two of them would work.

Tyler1, meanwhile, has contended that Dr Disrespect is too old to face him anyway, adding that he doesn’t “know why old people think they can stream on Twitch, honestly.”

A lot of it is just petty shit-slinging between two exaggerated characters, but it’s yet another example of manufactured drama propelling Twitch stars to new heights. The model’s worked wonders for YouTube stars, and it seems to be seeping further and further into Twitch’s DNA as well. People like taking sides, even when the stakes of a battle are ultimately pretty meaningless.

In addition, both Dr Disrespect and Tyler1 have recently benefited from big comeback narratives that demonstrated the monetary benefit of publicly dropping the ball as long as you’re able to put on a performance of reformation in the aftermath.

The kerfuffle also calls the reliability of Twitch’s public stat-tracking into question, both in regards to what Twitch (the website) displays next to streams and what Twitch (the company) says in the aftermath. In this case, fans have taken to distrusting Twitch because they think the company adores Dr Disrespect and wishes Tyler1 wasn’t so successful. During a recent stream, Tyler1 echoed that sentiment.

“Twitch doesn’t want me to be successful,” he said. “They really don’t! Do they care that I’m successful? No, because it helps them out. But do they wish I never was successful? Yes, for real, yes. Twitch can suck my big black dick.”

There’s no doubting that Twitch benefits from having unique stars emerge on its platform, but speculation says the company might not want to push Tyler1, whose reputation is closely associated with toxicity and some pretty noxious opinions, as hard as Dr Disrespect, who’s basically a gamer-friendly cartoon character.

Granted, with Dr Disrespect’s penchant for racist jokes now making headlines and stirring up debates, we’ll see where all of that goes.

As of now, all Twitch has said is that Dr Disrespect holds the record for most concurrent viewers of a single streamer. I reached out to ask about the ongoing debate as well as Tyler1’s exact peak, but as of writing, Twitch had yet to reply.