No One Knows The Truth About Steven Universe’s Diamonds

As Steven’s gradually come into his powers over the past five seasons, Garnet, Amethyst and Pearl have carefully kept many of the specifics about Rose, the Diamonds and the great Gem War to themselves. That secrecy’s a big part of what’s pushed Steven to become independent and seek out answers for himself, but in “Your Mother and Mine”, Garnet breaks form by opening up and telling a story about Steven’s mum that complicates everything about Steven Universe even more.


Rose shielding herself and the Crystal Gems from the Diamonds’ ultimate weapon. Image: Cartoon Network

While Steven’s been back in Beach City after his harrowing trip to Homeworld for a while now, Lars and the Off-Color Gems have been living their best lives flying through space in the ship they stole from Emerald. Together, the crew of the Sun Incinerator has become a family of happy circumstance, but Lars expresses his frustration at the fact that it’s still going to be a while before they’re going to make it all the way back to Earth where his friends and parents are.

Right on cue, though, Steven pops out of Lars’ head with a sandwich in hand and a plan to cheer his pals up – a plan that’s foiled when the Sun Incinerator’s engines stop working, leaving them all drifting through space. Rather than letting Lars gripe about his spaceship difficulties, Steven takes everyone’s downtime as an opportunity to hop back into Lars’ head portal to grab somebody he wants everyone to meet: Garnet. 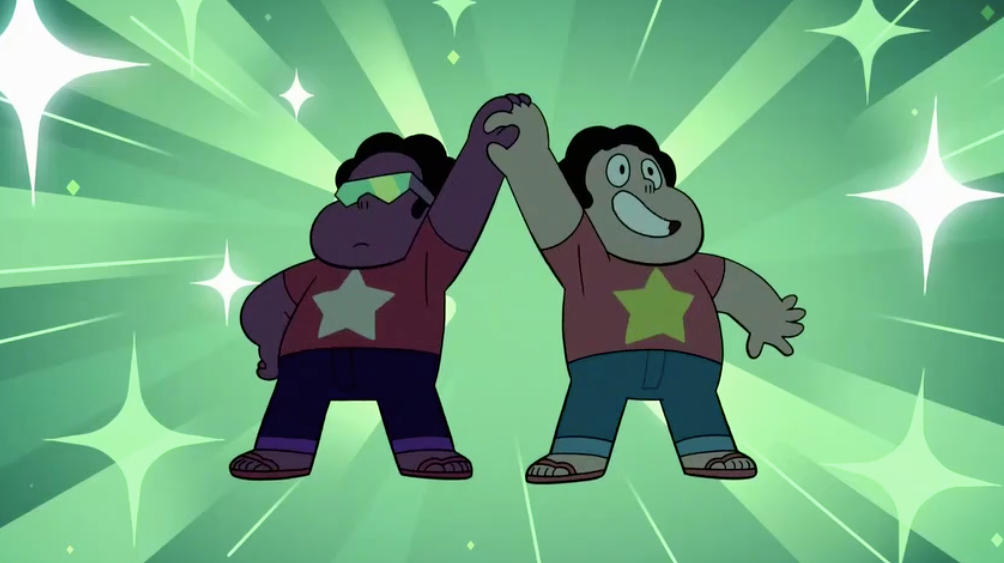 To say that Garnet’s pleased to meet the Off-Colors is something of an understatement – she’s absolutely delighted by them because they’re all nonconformist Gems whose uniqueness and imperfections make them Homeworld outcasts like herself. She compliments the rarity of an orange Sapphire such as Padparadscha, and how wild the series of events leading up to the fusion of a Pearl and Ruby to form Rhodonite must have been. Garnet tells the Rutile Twins that they’re a Gem unlike anything she’s ever seen, and when she comes face to face with Fluorite, she’s shocked at how beautiful she is.

Despite Garnet’s earnest enthusiasm, though, the Off-Colors misinterpret her praise as mockery that focuses on the things that make them imperfect, and Garnet admits that she, like them, was unable to see how fantastic her “flaws” made her until she met Rose Quartz. The mere mention of Rose’s name sends a panic through the ship, but one by one, each of the Off-Colors realises that they don’t exactly know what really sparked the rebellion because, back on Homeworld, the Diamonds have purposefully spread misinformation about the conflict. So, Garnet reasons that it’s time for one of her fantastic stories about the past.

During Era One, soon after Pink Diamond was put in charge of Earth, her first and only colony, Rose was created to assist her fellow Quartzes in the production of new Gems. At first, Garnet explains, Rose was content with her station in life, but as she experienced more and more of the Earth and discovered the sentient life thriving on the planet, she began to question the morality of Homeworld’s expansion. Because the other Quartzes aren’t like Rose, when she shares her feelings about the Earth with them one of them reports her to Pink, who summons Rose to her throne room to hear just what all she’s going on about.

Rose implores her Diamond to consider sparing the planet, but Pink brushes her off with a laugh and sends her back to the Kindergarten. The dismissal only serves to light a fire in Rose that drives her to tell more gems about why the Earth deserves to be spared. Gradually, Rose’s idea begins to take root in the minds of other Quartzes, who decide to side with her and create the first group of Crystal Gems to rebel against Homeworld.

Up until this point, Steven Universe has been somewhat cagey about what kind of ruler Pink was, but Garnet’s recollection of her is particularly interesting given the way we’ve seen Pink interacting with Yellow Diamond. Furious at the Crystal Gems’ insurrection, Pink (rather melodramatically) calls to Blue and Yellow, who send fleets of their own Gems to assist in what would become the Gem War. From what little we’ve seen of her in the past through Stevonnie’s dream, Pink was far more immature than any of her fellow Diamonds, something that initially kept them from giving her colonies and armies of her own. While it isn’t clear how long Pink had been operating on Earth leading up to the rebellion, it stands to reason that it was relatively early into her rule, meaning that soon after she’d finally convinced them to trust her, she came back to them with a problem that ultimately resulted in her being shattered.

It’s the ending of Garnet’s story that ultimately makes “Your Mother and Mine” such a curious episode, because the details don’t exactly add up. Garnet tells everyone aboard the ship that Rose shattered Pink using her signature physical weapon – the sword that Bismuth forged for her. But in “Bismuth”, Bismuth explains to Steven that Rose’s sword is only capable of destroying a Gem’s hard light form and specifically can’t shatter a Gem’s physical gem.

Obviously, that begs the question of whether Garnet’s lying to everyone, if she herself doesn’t exactly know how Rose shattered Pink, or (as many people theorise) that Pink wasn’t actually shattered. The only person who knows what went down, it seems, is Rose, and she’s a little bit indisposed at the moment.