As wildly irresponsible as Rose Quartz’s rebellion against the Gem Homeworld has seemed from the Crystal Gems’ perspective, Steven Universe has always strongly suggested that it was a choice Rose was forced to make in response to the Diamonds being tyrannical matriarchs who couldn’t stop themselves from acting in bad faith.

This week’s new episode “Together Alone” frames the Diamond Authority in an interesting, new way, however, that makes it a lot easier to understand Rose’s frustration with her people.

At the same time, though, the episode also reveals some ugly truths about the Diamonds and Homeworld culture that make clear just how much more work Steven and the Gems are going to have to do if they want to save the Earth.

“Together Alone” is that rare kind of Steven Universe episode that’s finds its heroes becoming something like amicable with people who were up until very recently their foes, before Steven won them over with his charms the way he’s wont to do. Because Blue and Yellow Diamond are no longer the most immediate threats the Crystal Gems have to face, “Together Alone” gives Steven (and us) a chance to really drink Homeworld in, and get a sense of what his life was like there 6,000 years before, when he was still Pink Diamond.

“Together Alone” is packed full of clever little details and new Gems that make Homeworld finally feel like an actual place as opposed to the shadowy background concept its been for the bulk of the show, but the most curious bit of information Steven gleans from his time there comes in the form of a dream that seemingly confirms a theory about White Diamond, White Pearl, and the Crystal Gems’ Pearl.

Unlike Blue and Yellow Pearl, whose gem placement matches up with that of their Diamonds’, Pearl of the Crystal Gems (who once belonged to Pink Diamond) holds her gem in her forehead. It’s always been odd, because Pink Diamond’s gem is placed on her navel, but became even more so after the show introduced the fact that White Pearl’s gem is also on her navel.

In Steven’s dream, he envisions himself hanging out with a gem who bears a striking resemblance to White Pearl but she instead has a pink hue to her, suggesting that at some point in the past, that Pearl was actually assigned to Pink Diamond, making her Pink Pearl. 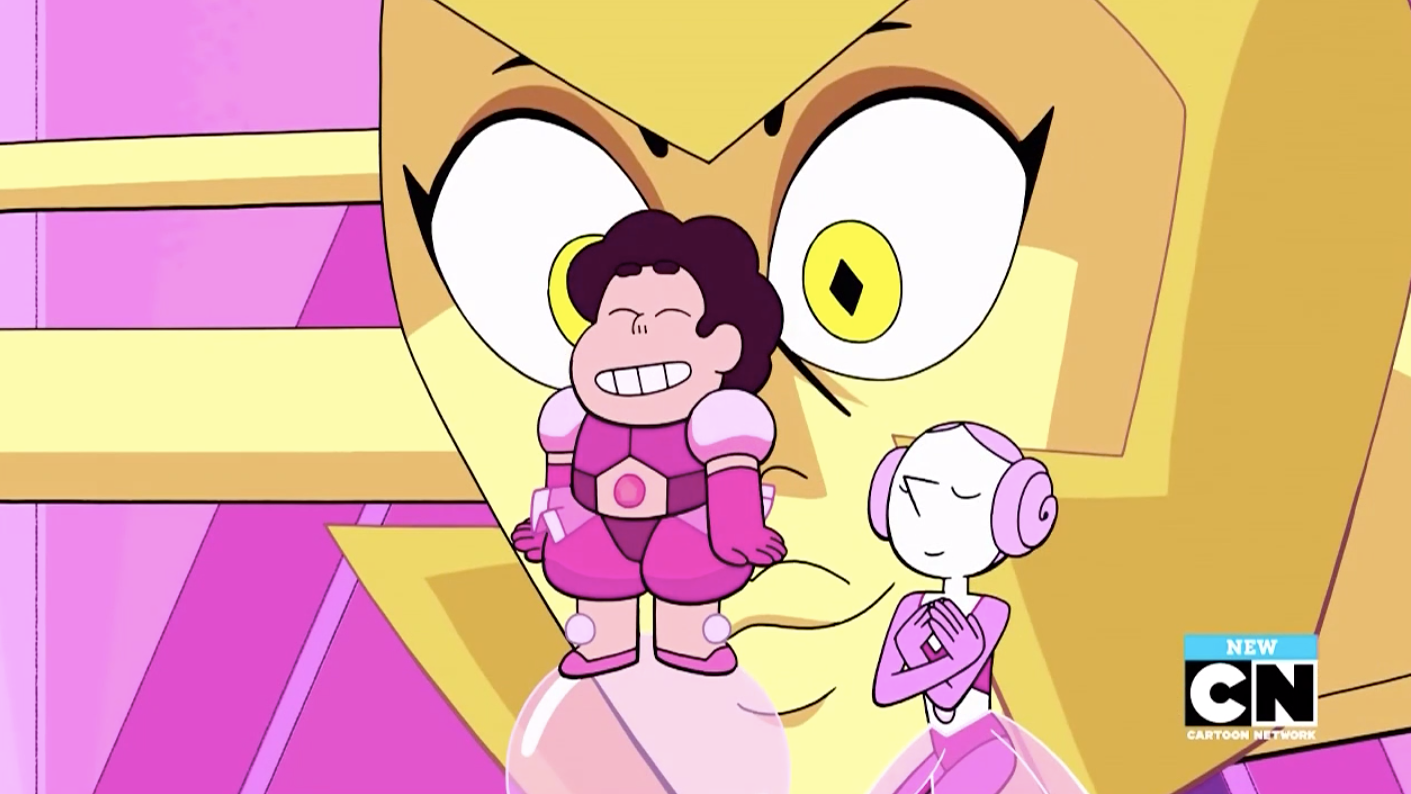 Steven’s dream of his past as Pink Diamond. (Image: Cartoon Network)

Much in the same way that Pink Diamond and the Crystal Gems’ Pearl often got into mischief with one another when the other Diamonds weren’t around to enforce their strict rules, Steven and Pink Pearl are clearly friends with one another in a way that would be frowned upon by Gem society.

The way Steven’s dream abruptly ends—with him coughing up clumps of Rose Quartz’s hair and being confronted by White Diamond suggests that ultimately, Pink Diamond and her Pearl were caught and punished for slacking off, with the consequences being much more devastating for Pink Pearl given her lower status.

“Together Alone” doesn’t exactly spell out what happened to Pink Diamond’s Pearl, but it stands to reason that she was taken away and “reconditioned” (see: the permanent crack in her eye and her voice being unlike any other Pearl’s) before being replaced by the Crystal Gems’ Pearl. As quickly as the dream sequence plays out, it effectively sets the tone for the way the rest of “Together Alone” pans out. as Steven attempts to convince Blue and Yellow Diamond to let him throw a ball to celebrate “Pink Diamond’s” return.

Steven’s scheme to use the ball as a means of getting a chance to speak with White Diamond and convince her to help him heal the Earth’s corrupted Gems is honestly brilliant, and the sort of clever, quick thinking that illustrates how much he’s matured in the years since Steven Universe began.

Making a show of honouring Homeworld tradition is something that ingratiates the Crystal Gems to the Diamonds and lulls you into thinking that maybe, just maybe, diplomacy is what’s going to end up saving humanity. But that’s the narrative trap that “Together Alone” wants you to wander into because nothing’s ever quite what it seems with Steven Universe. 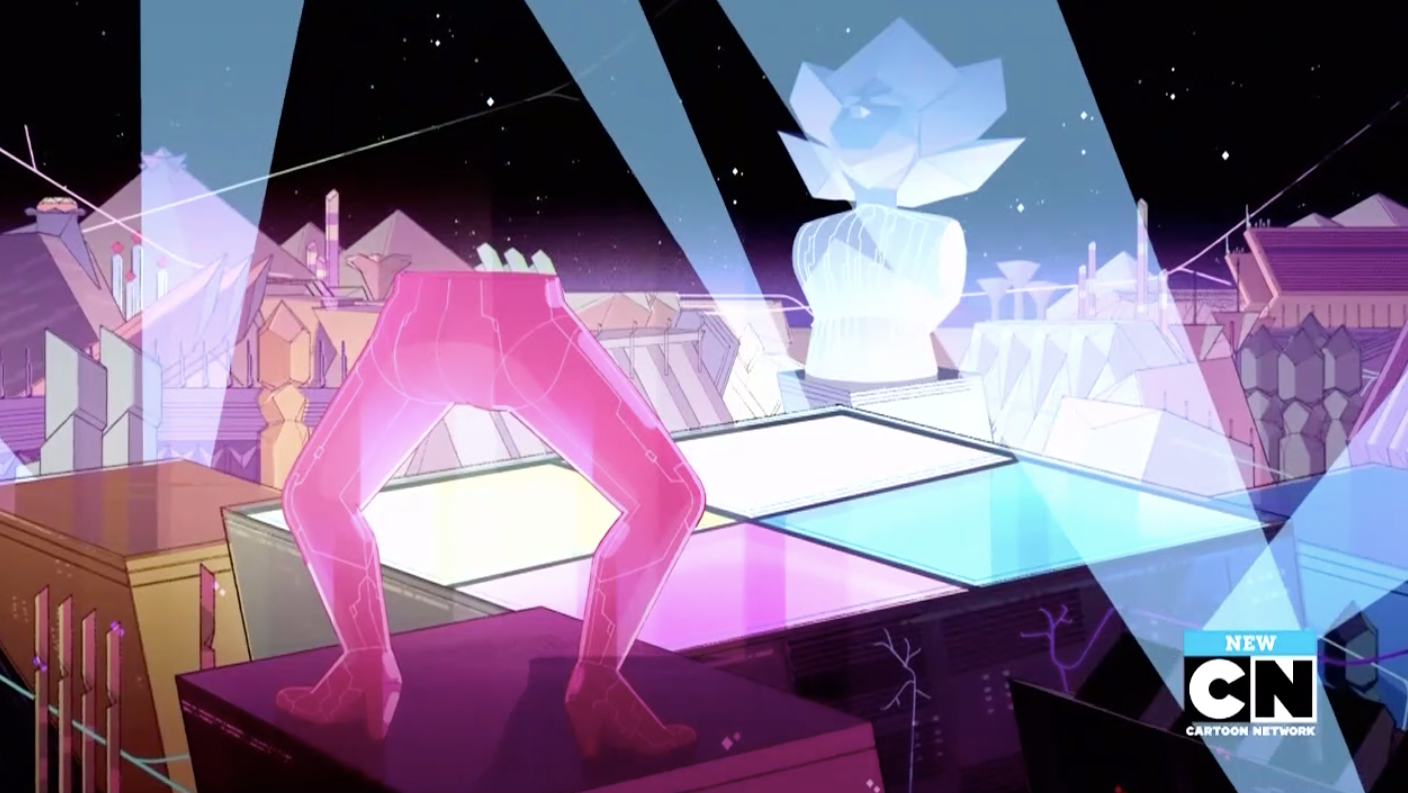 The Gem Homeworld all lit up for a ball. (Image: Cartoon Network)

“Together Alone” illustrates that, for all the growing that Steven Universe’s mysterious Diamonds have done, they’re still very much the gems they’ve always been. The distant and unsettling White Diamond can’t even be bothered to attend Steven’s ball, and happy as Yellow and Blue Diamond are to have Pink Diamond back in their midst, they’re still deeply committed to the rules of their world, and don’t understand that Steven’s challenging them to change.

Being the reckless teenagers they are, Steven and Connie’s fusing in front of the Diamonds mid-dance at the ball was inevitable. But seeing their disgusted reactions to Stevonnie, the Crystal Gems, and the Jades (voiced by Aparna Nancherla) brave enough to fuse in public is equal parts heartbreaking and terrifying, because it demonstrates just how quickly the Diamonds are willing to ignore their tenuous fondness for Steven in favour of enforcing the status quo that is Homeworld’s law and order.

There was always a chance that Steven and the Gems were going to have to come together (perhaps literally) in order to take on the Diamond Authority, but by the end of “Together Alone”, Steven and Connie are the only heroes left unscathed and unpoofed, after Yellow rapidly carves a bloodless but still horrifying path through the Crystal Gems and the rest of the ball attendees.

Even if they had Garnet, Amethyst, and Pearl by their sides, their collective strength wouldn’t be anywhere near to go toe-to-toe with the Diamonds. All it took was a flick of Yellow’s wrist and the Crystal Gems were wrecked—and now, Steven and Connie have to figure out how they’re going to make it off Homeworld alive.