The events of Dark Nights: Metal have had some wide-reaching implications for DC Comics' universe, well beyond setting the stage for the current Justice League line up. The roster in the Hall of Justice is not the only thing being shaken up right now; the fundamental forces of the entire cosmos are as well.

The first two issues of Justice League - from the ginormous all-star team of Scott Snyder, Jim Cheung, Jorge Jiminez, Mark Morales, Tomeu Morey, Alejandro Sanchez and Tom Napolitano - have seen the latest iteration of the team dealing with the reckoning brought about by the Source Wall breaking down in the climax of Dark Nights.

The wall, once the literal barrier at the edge of the multiverse keeping everything vaguely normal, has cracked, which already lead to the attack of the Omega Titans - bizarre cosmic entities from beyond the Wall's reaches, attempting to munch down on the entropic energies of Earth - during the events of the No Justice miniseries.

But that's been dealt with, and it's far from the biggest problem the League is facing right now. The cracks in the Source Wall have lead to all sorts of weird cosmic events afflicting Earth and the universe at large - primarily, the arrival of a giant beam of cosmic energy the League has dubbed the Totality, allegedly containing a code some members of the team believe could jumpstart the evolution of the decaying multiverse into something new... or just outright destroy it.

The Totality has smashed into Earth, coalesced in a giant, horrifying face the League is just barely managing to keep hidden from the public, because whoever comes into contact with it is mutated into wildly enhanced beings designed to protect the Totality from outside interference.

The giant sand-face of unknown ancient energy in the Nevada desert is not the only hint that something is deeply, deeply wrong with the natural order of the DC universe though.

In today's Justice League #2, we get a lot of tiny little nudges about everything not being quite right. Sinestro uncovers an entirely new ultraviolet spectrum of emotional light to control, subsuming John Stewart as his first recruit in a new, hate-filled Lantern corps.

The Guardians of Oa are investigating the decay of the cosmic membrane at the edges of existence. 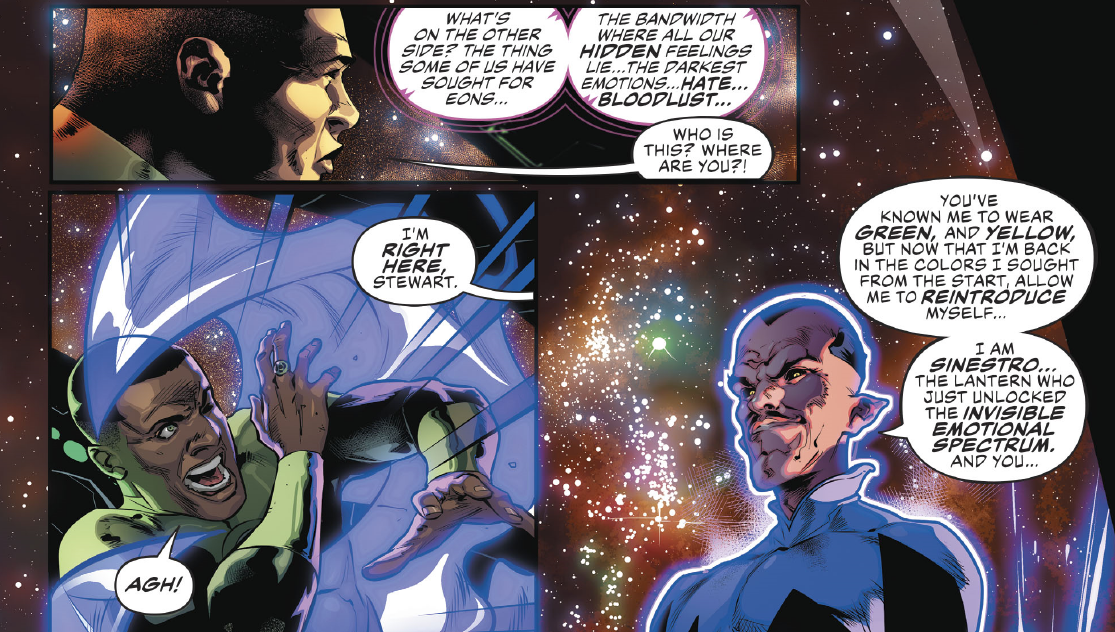 The Speed Force, the source of Barry Allen and countless other speedsters' power, has become intermittent, shorting out randomly (and for Barry at least, at the worst possible times).

Hell, even Lex Luthor and his all-new Legion of Doom are getting in on the weirdness, with Lex hatching a secret plan to unlock seven of the "hidden forces" of the universe now unleashed by the Source Wall's cracking, in an attempt to control the Totality for himself.

It's all being dripped into this new Justice League series in small moments, here and there around the events focused on the Totality's arrival, but they're all adding up to paint a very grim picture for the DC universe right now: Slowly but surely, the very fabric of the multiverse is coming undone at the seams, and none of our heroes have any idea with how to deal with it.

Whatever happens, the DC universe is in for a very weird time in the near future.