Shadow Of War Is Now Microtransaction-Free

Middle-earth: Shadow of War came out on 11 October 2017. Two hundred eighty days later, it is now free of all microtransactions. It’s a drastic change and yet another sign that 2017 was a turning point for the video game industry’s brief obsession with loot boxes.

Today, Warner Bros. patched Shadow of War to remove the game’s paid currency, putting an end to a confusing microtransaction system that had been in place since the game launched.

The publisher had announced in April that this was happening, but waited until today to make the change. If you did spend money on the game, you’ll now find a message that says something like this: 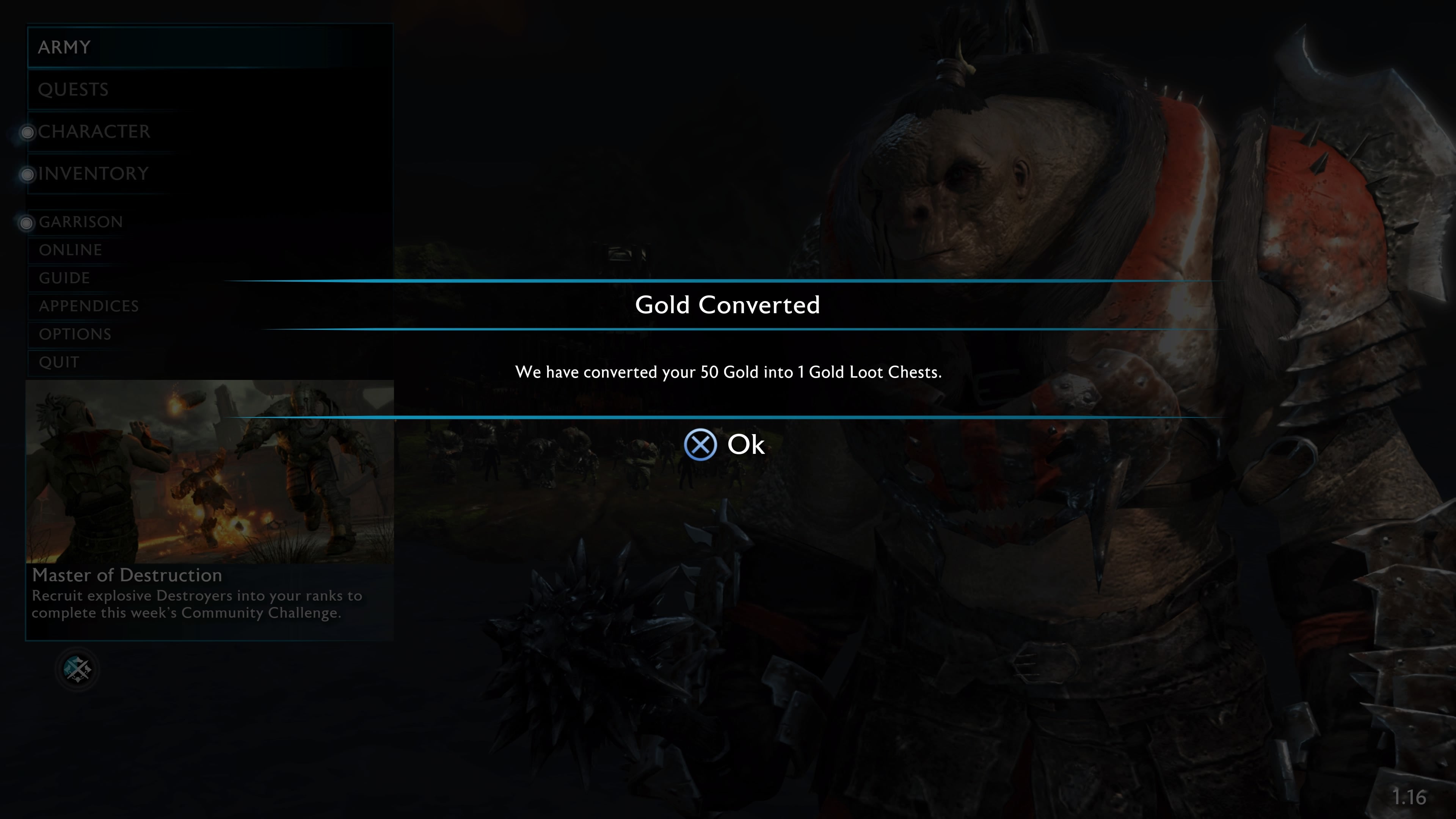 If you purchased gold in Shadow of War, it will be converted to one-time-use gold loot chests that can give you gear.

This unprecedented move comes nearly a year after Shadow of War became one pressure point of a long and angry debate over additional payments in video games, alongside the controversial Star Wars Battlefront 2, which triggered so much ire that publisher EA pulled all of its microtransactions the night before it launched.

Shortly afterwards, EA made a big pivot. If 2017 was the year of loot boxes, then 2018 is its exact opposite, as the mega-publisher declared that neither of its big upcoming shooters, Battlefield 5 or Anthem, will have any form of randomly-generated microtransactions.

“While purchasing Orcs in the Market is more immediate and provides additional player options, we have come to realise that providing this choice risked undermining the heart of our game, the Nemesis System,” a community representative for developer Monolith Productions wrote on the forums in April.

“Simply being aware that they are available for purchase reduces the immersion in the world and takes away from the challenge of building your personal army and your fortresses.”

So what changed? What made Monolith and Warner Bros. decide to remove premium currency nearly a year after launch? Was it fan anger? Legal threats? Or something else entirely?

Like most game publishers, Warner Bros. does not share its sales data, but there are a couple of clues out there.

One is that in October 2017, Shadow of War was the top seller on NPD, beating out Assassin’s Creed Origins among other games. In November, Shadow of War fell to 12.

Incomplete data can’t paint an accurate picture, but these clues support one hypothesis: Shadow of War sold well at first, then tailed off. Which is exactly what might happen if a much-hyped game was full of microtransactions that left players with a sour taste, encouraging bad word of mouth. “Oh, that game’s cool and all, but it wants me to spend extra money? No thanks.”

By pulling all of the loot boxes from Shadow of War, Warner Bros. is sending a strong signal. That isn’t to say that Warner Bros. is giving up on microtransactions — quite the opposite, in fact.

Like every other big publisher in the games business, Warner Bros. is doubling down on “games as a service” in hopes of generating as much revenue as possible without charging more than $80 for its big-budget games.

In the future, those games will just be a lot more subtle about it.