In Front Mission 3’s 18th battle, I’m on a naval base facing down two giant walking artillery cannons, four Gundam-like mechs, and an apache helicopter. It isn’t the most challenging tactical role-playing game from the PS1 era, but like a lot of games from that era it’s prone to the occasional difficulty spike.

Unlike many other games in the genre though, characters in Front Mission 3 don’t just live or die. They crumble, slowly, under barrages of gun fire and missiles, and I just can’t get enough of it.

Compared to the likes of the recent 3DS Fire Emblem games or even something like XCOM, Front Mission 3 is a plodding, arduous affair.

Your characters pilot mech suits called Wanzers, whose health is divided across four different segments of their armour: Arms, legs, bodies and the pilots themselves. The result is encounters in which two hulking death weapons can exchange punches and bullets until their legs malfunction and their arms have been blown off.

It’s brutal to behold but lovely to watch, in part because Front Mission 3 is cut from the same mould as Final Fantasy 7.

There’s a battle camera that pans across the battlefield, cuts to close ups, and lingers on micro-deaths: An arm holding a giant shotgun that’s been replaced by a bundle of frayed wires and broken metal, robotic legs that used to side-step incoming fire now sputtering and wrapped in a tangle of electrical surges.

A lot of games maintain stark boundaries between success and failure, life and death, but Front Mission 3 lets you eke out victories in a perpetual half-state of uncertain doom.

This was especially the case during my recent showdown on the naval base.

The Front Mission series is a meandering mess of inter-character melodrama and obtuse geopolitics. There is a unified timeline each game works off, but it isn’t all that important. It’s enough simply to know there are enemy robots standing in your way who need to be destroyed.

In this case, it was four against seven, one of who was Jose, a tragic war criminal forced to fight us against his will in our attempt to escape using one of the base’s seaplanes. 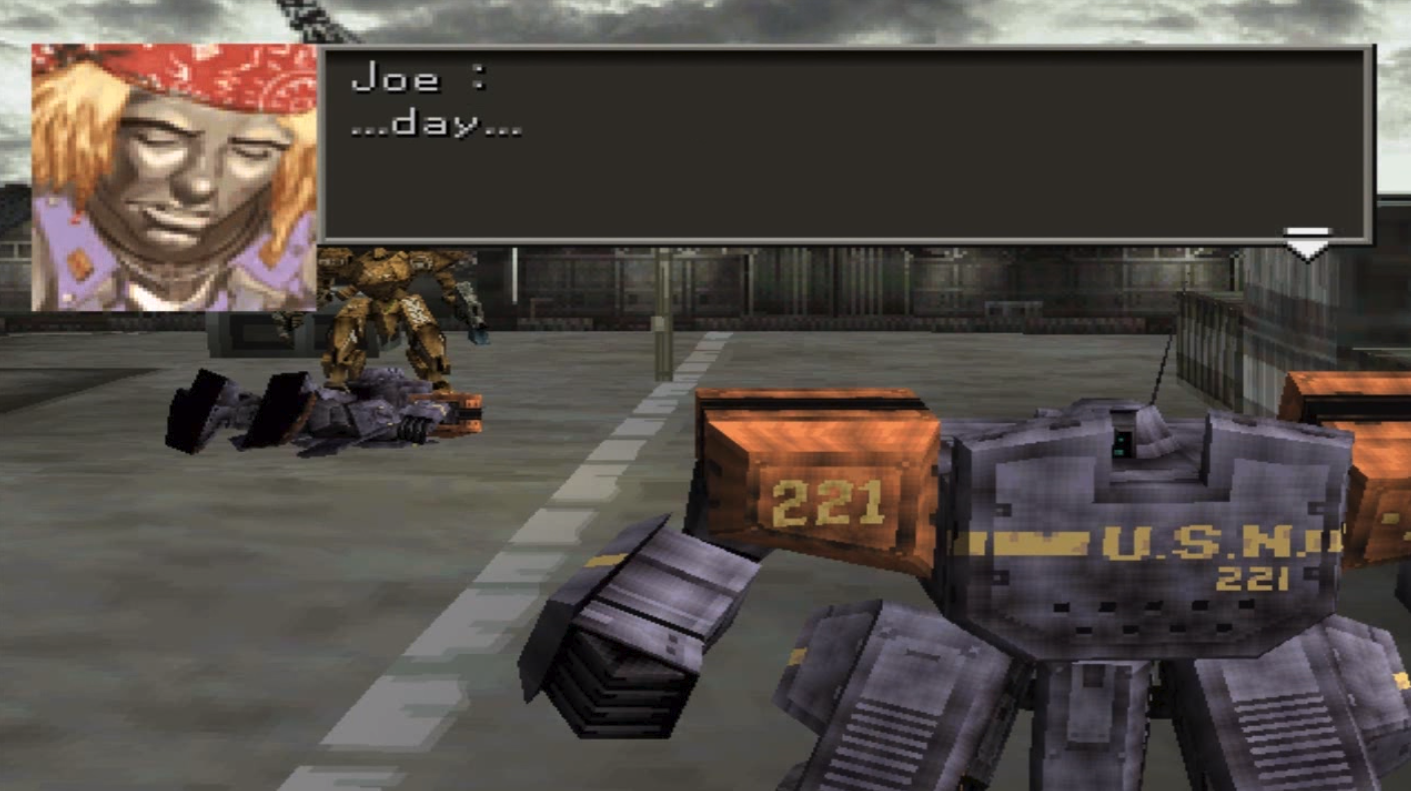 I kept my group huddled in the corner of the map where they originally spawned after a more aggressive approach failed. Sitting back and watching the hit points of your team drop round after round is difficult to endure — better to die trying than a slow death by turtling.

But turtling was the only strategy left to me, and so I let the fight play out as both sides exchanged blows.

It worked, but barely. Seventeen rounds later, amongst a battlefield littered with half-destroyed and inoperable mechs, my test pilot and his best friend, ejected from their Wanzers, managed to take out the final piece of enemy artillery with just their pistols.

It was a victory that arrived through a combination of luck and strategy that imbues the game with a grim charm, even all these years later. Like so many of my most memorable moments playing games, it came down to the wire, but only after a long, drawn-out fight where for the longest time it looked like nobody might win.