call of duty black ops 3call of duty wwiikotaku coremultiplayersledgehammer games
To sign up for our daily newsletter covering the latest news, features and reviews, head HERE. For a running feed of all our stories, follow us on Twitter HERE. Or you can bookmark the Kotaku Australia homepage to visit whenever you need a news fix.

Heard of “sandbox games?” Well, now it’s literal: You can play as tiny, plastic soldiers in a sandpit as part of Call of Duty: WWII’s Days of Summer event. The seasonal fun also spans across Black Ops 3, Modern Warfare and Infinite Warfare, but this particular map is exclusive to WWII, and is one of the better ones.

Sandbox arrived with the Days of Summer event on July 31 as free DLC for PlayStation 4. The new map does hold the standard 30 days’ exclusivity for PlayStation users, forcing Xbox One and PC players to wait until winter is coming to an end before they get a chance to play it.

This seasonal map takes its cues from Black Ops 3’s “Micro” map, which provided a larger-than-life experience with soldiers appearing to have a tiny battle on a picnic table stocked for a pretty epic BBQ. Hot dogs, soft drinks, and a smorgasbord of desserts all appeared ginormous, from the shrunken players’ perspective

Sledgehammer Games has really put great thought into their own larger-than-life Sandbox experience, which lets you enjoy some sun and sand as little plastic army men in a sandpit filled with toys. Your plastic soldier will use a baseball, sand bucket and crayons as cover for a fight that takes place inside an actual sandpit within the WWII HQ space.

The map’s background is the lower portion of the HQ, and located not far from the scorestreak training tower. The HQ’s Quartermaster, Captain Butcher, sits just outside the map with a magnifying glass that he uses to periodically burn a deadly streak of fire down the middle of the map. This isn’t a controllable scorestreak — it’s just another way to die in the sandpit.

As an added touch, you can even find the sandpit in the actual HQ, to get a sense of what it looks like from human size. 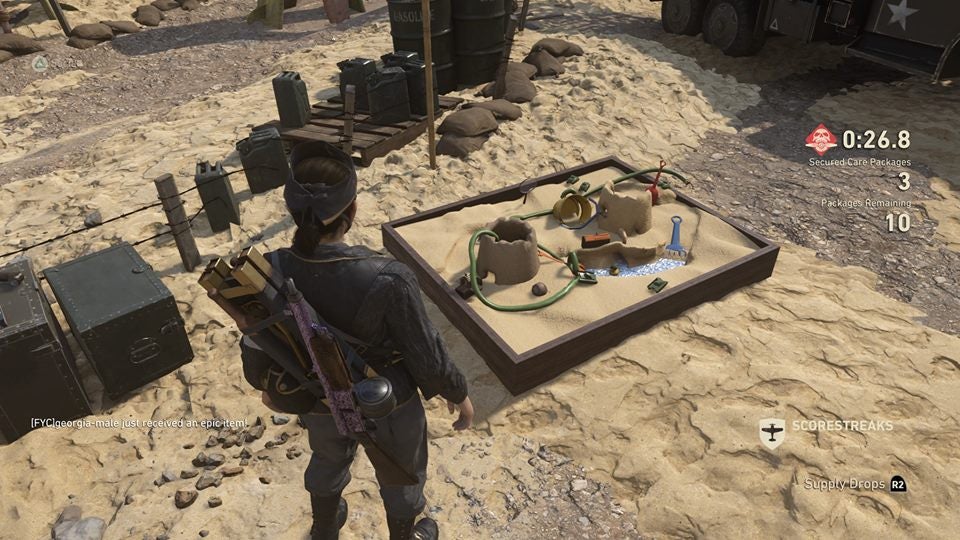 A lot of Call of Duty’s recent fun stems from the modes that don’t take the game too seriously. While I can appreciate the initial attempt to make WWII historically accurate, I really enjoy the silly modes: Call of Duty’s hide-n-seek with Prop Hunt, zombies in multiplayer, hunting trolling leprechauns, and now the whole Honey, I Shrunk The Kids vibe in a sandpit.

Days of Summer also brings new challenges and gear, including three new guns and a watermelon camo. The HQ social hub has even been dumped with sand and a lot of umbrellas to bring that warm summer vibe.

A six versus six aerial dogfighting mode is available for a limited time, which is great for players who want more of the same air combat featured on the “Operation Husky” War map from The War Machine DLC. I’m not sure how pesky sprites fit into the seasonal theme, but the Leprechaun Hunt has also returned.

The event will last until August 28, so grab some sunscreen and toss those beach balls in the HQ while you can.