In Magic: The Gathering Creator’s New Card Game, Every Deck Is Unique

KeyForge: Call of the Archons bills itself as a card game in which no two decks are the same. Maker Fantasy Flight Games announced it at GenCon 2018 today, revealing that Richard Garfield, veteran designer behind Magic: The Gathering, is working on it. It sounds wild.

Games such as Magic release new expansions every few months, at which point hardcore players rush to buy new packs so they can get their hands on the best new cards. Individual cards also get resold online, making it possible to easily netdeck, that is, look up the list of cards for a deck constructed by a pro and then buy them.

KeyForge will be different. Instead of booster packs, the cards will only be sold in individual decks, but the hitch is that all of the cards in each deck will be random and no two decks will be the same.

Here are some more details:

According to IGN, Garfield said the point of this structure was to try to get back to the feeling in the early days of Magic when each individual card felt special and the internet didn’t exist to allow everyone to share deck lists and race to complete the best ones. He’s apparently wanted to make the game for 10 years, but it wasn’t until recently that the economics of producing it were feasible. 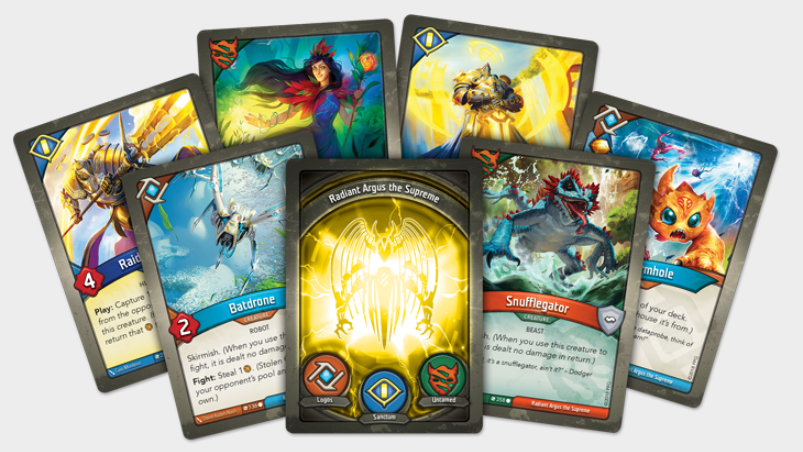 KeyForge will still have starter decks that come in the base set which all always the same to make learning the game easier. (Screenshot: Fantasy Flight Games, KeyForge)

The way the game will actually play is also a little different. Like in Magic there will still be creatures, artefacts and spell cards. At the start of each turn, a player names a House and then can only play cards from that House for the remainder of the turn. Most notably, none of the cards have any costs, so players can unleash as many of them as they have in their hand.

The goal of the game is use your cards to collect a certain amount of a resource called Æmber and in order to create keys. Once a player has created three keys they win.

According to the announcement post by Fantasy Flight Games, there are more than 104,000,000,000,000,000,000,000,000 possible deck combinations based on the existing library of cards the company plans to launch with. How many of them might turn out to be uncompetitive duds will be the real test.

It’s an interesting next step for the company whose previous card game, Android: Netrunner, was much beloved but is now dead due to licensing deals falling through. (It was also based on another card game created by Garfield.) If KeyForge turns out to be fun to play it could also inspire a similar mechanic in digital card games, which, by virtue of not being limited by the material world, could take Garfield’s idea and continue running with it.

KeyForge is set to release before the end of 2018, but there’s not a specific date yet. For now, you can go read the game’s rulebook to get a better idea of how it’ll work.