Anthem: The Promise Vs. The Reality

The launch of BioWare’s new multiplayer loot shooter has been anything but smooth. Anthem is a pretty game undermined by bugs, frustrating user-interface obstacles, and a world that feels static and lifeless.

There’s a lot BioWare can do to continue improving it, some of which could include incorporating stuff that Anthem already appeared to have in earlier promotional trailers and gameplay demos.

Anthem was first revealed back at E3 2017 during EA’s press conference with a short teaser trailer, followed by a longer seven minute clip of actual gameplay at that year’s Xbox showcase.

The real-time, in-engine footage was lightly narrated by the game’s director, John Warner, and showed the main character having a short conversation with someone in Fort Tarsis, the game’s main hub, before going out into the world to embark on a new adventure. 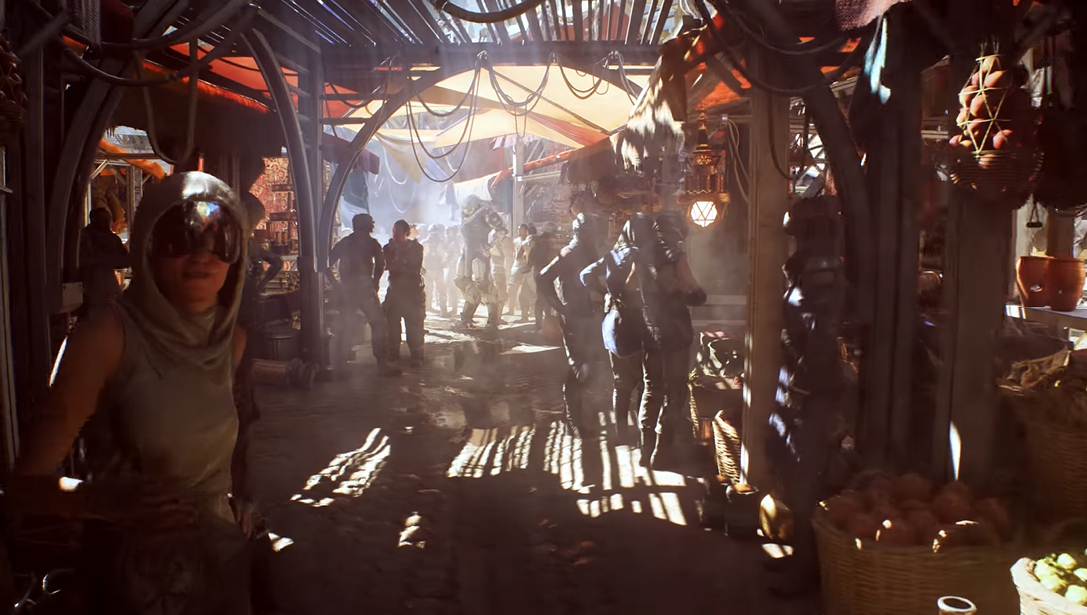 Fort Tarsis was much more detailed in the original reveal. (Screenshot: EA, Anthem) 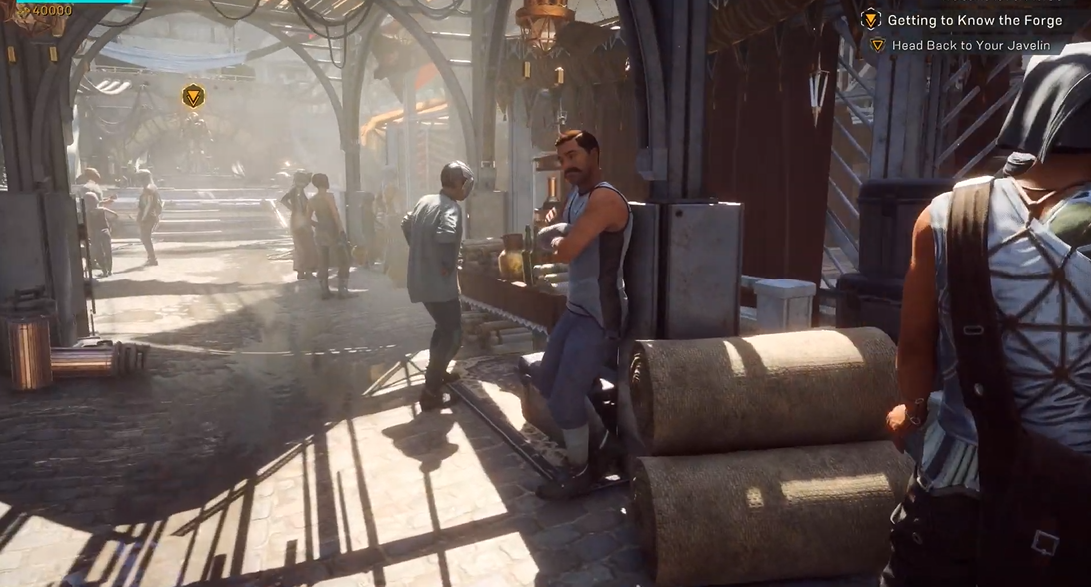 There are less people and stalls in the main part of Fort Tarsis now, and characters don’t approach the player but instead all stand in place. (Screenshot: EA, Anthem)

The visual downgrades between this first gameplay trailer and the current game are abundant but not totally unexpected. Carefully crafting a tiny vertical slice of a game is very different from launching the full thing, so the fact that the actual Fort Tarsis is more sparse and less vibrant than the one players were first introduced to isn’t shocking.

Neither is the change in scale of the world outside to be smaller and include fewer spontaneous interactions with the indigenous wildlife. 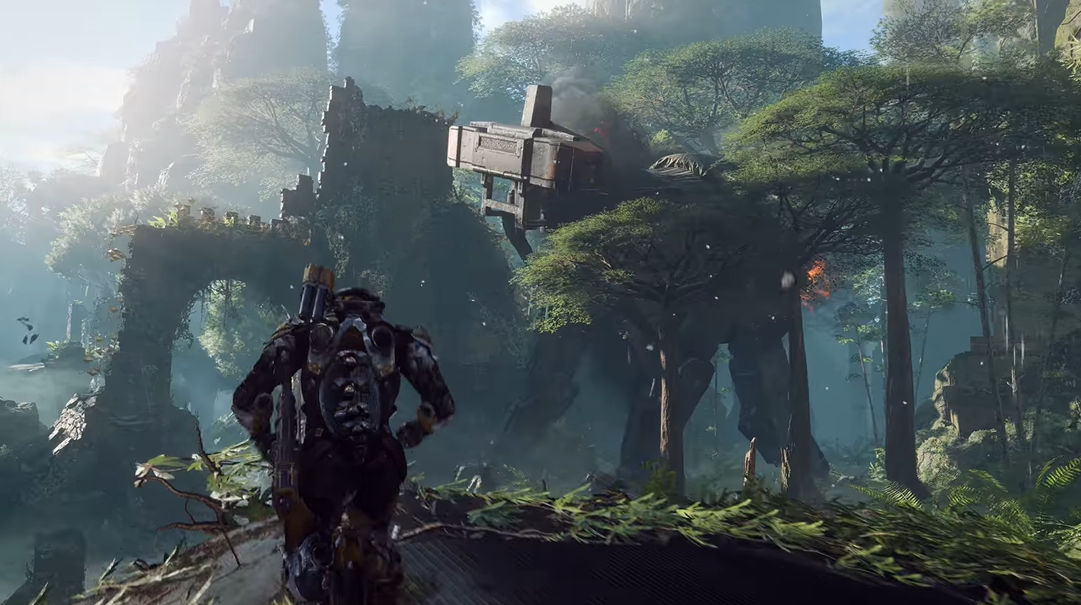 The original gameplay trailer showed a Strider walking and getting blown up during the course of exploration. (Screenshot: EA, Anthem) 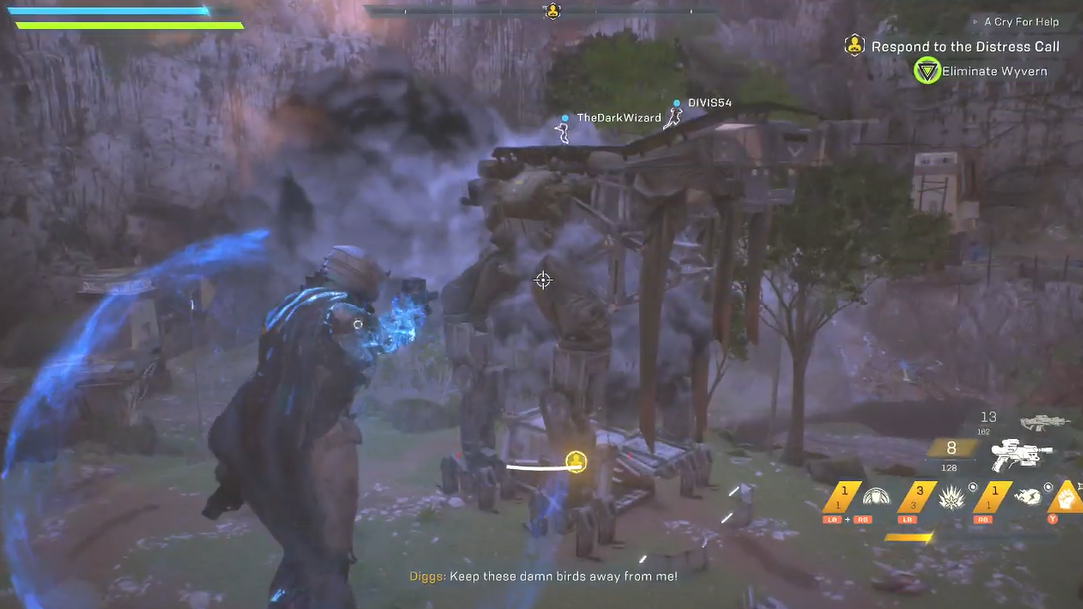 In the current version of Anthem, Striders are completely stationary. The world as a whole is also less dynamic. (Screenshot: EA, Anthem)

A more significant difference in this early footage is how the character explores the world. In the final version of Anthem, you select a mission or zone from a large map every time you leave Fort Tarsis. The E3 2017 footage shows a player simply meeting up with a friend outside the walls of Fort Tarsis and then going on their way in search of bad guys to fight and loot to collect.

The footage shows both players running by a mysterious cave, where a marker for another potential mission pops up, and they decide to wait and come back to it another time. Enemy Scar, the game’s race of humanoid insect scavengers, are stalking around portions of the world like they actually live there, flooding around corners and over hills during a big shootout rather than magically appearing and disappearing using portals.

At one point the main character kills a wave of them and finds some rare loot. The name immediately pops up on her screen. It’s a masterwork gun called Jarra’s Wrath. We can see the stats relative to the player’s current weapon. They’re better. She immediately equips it and starts using it.

In Anthem’s first gameplay trailer the player is able to pick up loot during missions and immediately start using it. (Screenshot: EA, Anthem)

The actual experience of going out on a mission with your friends in Anthem is much less free-flowing. You first select a mission and are then bound to whatever that activity is without any ability to switch off while out in the world if you decide something else looks more interesting.

You can’t even load into another mission from a menu while in the field. Instead, every mission is like an amusement park ride. You can choose to go on another one, but you’ll have to first leave and then get in a new line.

Enemies on these missions primarily appear via magic portals. Even in enemy camps and hideouts, most of the people you fight appear to be teleporting in from somewhere else. It can be immersion breaking, a reminder that you’re not exploring somewhere that’s lived in, but rather just killing stuff until an objective is fulfilled, at which point enemies have a tendency to slowly evaporate as you’re shooting them.

In the 2018 gameplay demo, players entered a stronghold mission from the main free-play area rather than loading straight into it. The transition was accompanied by a short animated sequence. (Screenshot: EA, Anthem)

When these fights are done, you can scour the field for loot. Perhaps most damning for Anthem, a loot shooter, is that you can’t actually use or even immediately identify any of the stuff you pick up like the player did in the initial gameplay reveal.

You might get something extremely rare, but you’ll have to wait until you get back to the fort to figure out what it is, then access the forge (an entirely different screen) before you can actually equip it. It’s a small but significant obstacle.

Even in the longer demo shown at the E3 2018, which is much closer to the final game, there are features Anthem currently doesn’t have.

Load screens when going out into the world or into a cave are masked in part by animated transition sequences.

The player is able to travel to missions from within the world rather than having to first select them from a menu screen.

World events, such as a giant Ash Titan stomping through a valley, occur during the mission rather than being confined to isolated instances of free-play.

A friend is seen being able to join the group mid-play session, rather than needing to have been there at the start because another random person has been backfilled into the mission.

The players are even told to be careful so as not to alert enemies and trigger a call for reinforcements. 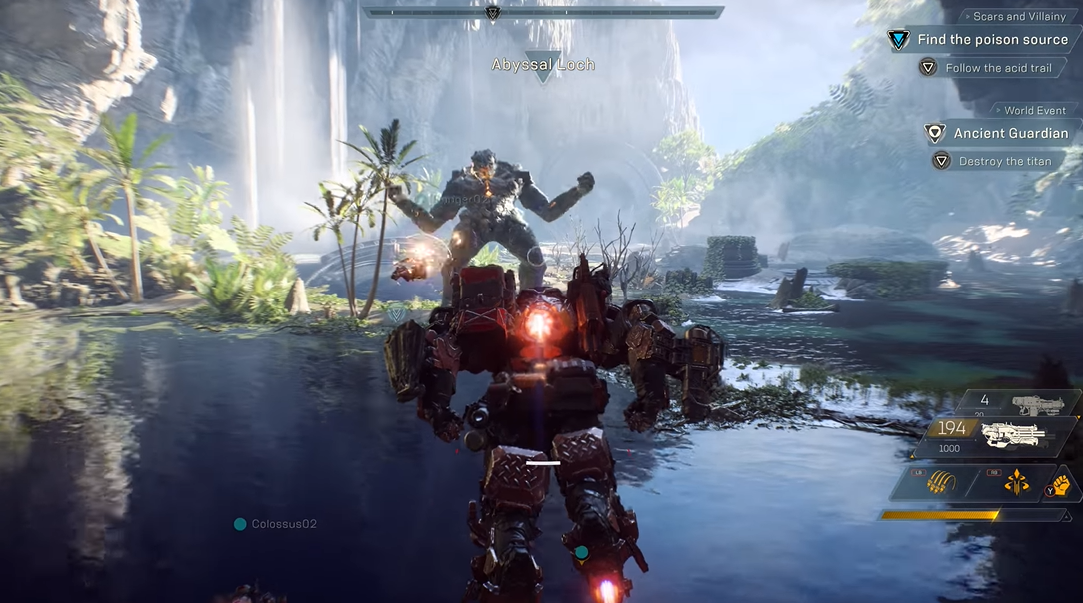 While on the way to complete the Scars and Villainy mission in the 2018 demo, players were also able to simultaneously participate in world events. (Screenshot: EA, Anthem)

Ben Irving, the game’s lead producer, who narrated the demo video, describes a shared world that’s always changing but which players experience together no matter when or where they’re playing.

It’s a vision of Anthem’s world that aligns closely with out the studio described the game during a panel discussion at E3 2018 and in a subsequent promotional video called “Our World, My Story”, but not the version of the game that currently exists.

The “Our World, My Story” video depicts Fort Tarsis as a single-play hub for choice-driven storylines to play out, and contrasts it with the world outside where players will explore environments and events that are the same for everyone.

I have yet to find a dialogue choices in the game that actually seemed to have any consequence besides the handful of words it immediately elicited from the character I was talking to. And the rest of Anthem’s world is currently laid out as a series of isolated four-person instances to be selected from a menu.

World events can happen during free-play, but they don’t feel shared since the number of other people there to witness them with me is so limited. The cumulative effect feels less like exploring a place and more like grinding through a playlist. 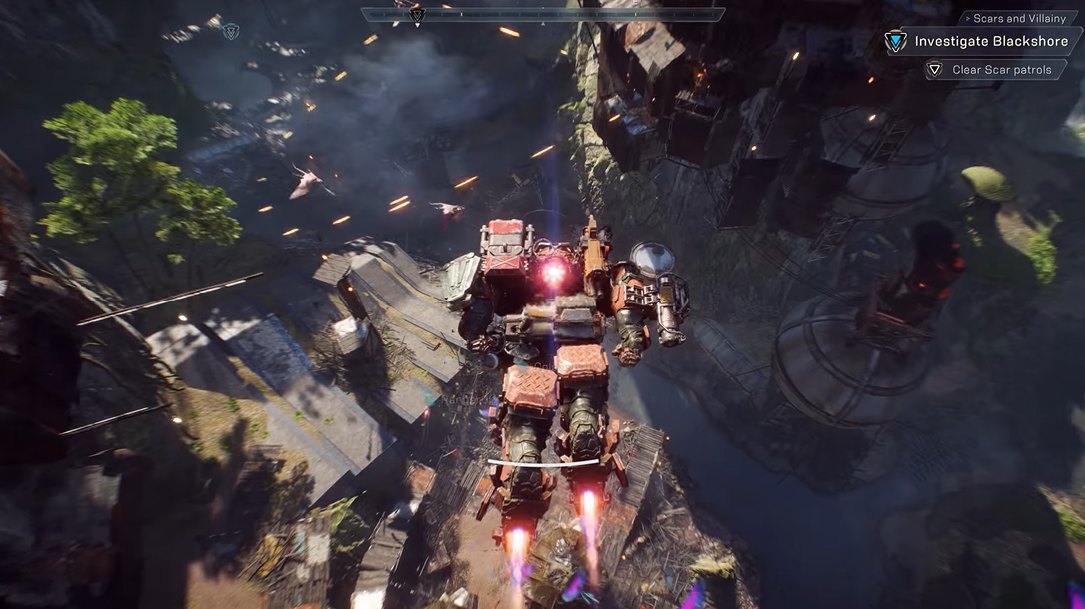 There’s a lot more going on in the world in the 2018 demo, including enemy anti-air gun fire fighting off attacks by other monsters. (Screenshot: EA, Anthem)

Even the cosmetic items haven’t lived up to the hype. As Kotaku’s Mike Fahey recently noted, the store for decals, armour sets and emotes is noticeably sparse at the moment, even though we know more stuff exists. BioWare showed us that it did in a developer livestream from several months ago.

When players recently brought up these differences on Reddit, Irving responded by calling it the “cost of transparency”.

“Game development is full of change,” he wrote. “There are a million reasons why you set out with an idea and it evolves over time. This is common in every game. We shared as much as we could. Some things change. So the cost of transparency is that some things we said become not true, not because someone was dishonest but because it changed over the course of development.”

As a live game, Anthem’s development is ongoing, so it’s likely things will continue to change. It’s even possible gameplay features we saw in these trailers will eventually get added in future updates. And as we’ve seen with other online games such as Destiny and No Man’s Sky, it’s possible the Anthem of two years from now will be very different.