TIE Fighter, And Star Wars’ Idea Of The Good Imperial

Today Marvel Comics launched TIE Fighter, a miniseries about an elite squadron of Imperial pilots who find treachery among their ranks. It ties into the upcoming novel Alphabet Squadron, starring an ex-TIE pilot who defects to the fledgling New Republic, but it got me thinking about another story of a TIE pilot, one with intriguing parallels to these new stories.

Although unnamed and mostly unseen in the actual game — his story was fleshed out in an accompanying novella packaged with first-run copies, as well as the game’s strategy guide — Maarek Stele was the protagonist of the beloved PC gaming classic TIE Fighter. Released in 1994 as a follow-up to the flight simulator X-Wing (which had launched the year prior to surprise critical and commercial acclaim), TIE Fighter isn’t just remembered as a smart improvement over its predecessor, both visually and mechanically. It also did something no Star Wars game had ever done before: It cast you as a wholly committed, dyed-in-the-wool agent of the Empire.

And few Star Wars games have done that since. 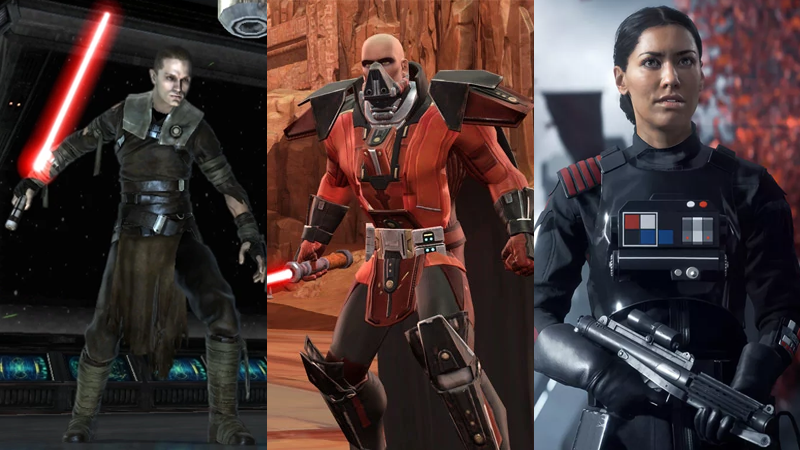 From The Force Unleashed to The Old Republic to Battlefront II, Star Wars games have long shown Imperial perspectives—while offering the chance to show those perspectives becoming non-Imperial ones. (Image: Lucasarts, Bioware, EA/DICE)

There have been Imperial protagonists since Stele, of course. From 2004’s Battlefront II to 2017’s, err, Battlefront II, even beyond the Empire in sagas like Knights of the Old Republic, where player choice allowed you to align yourself to the Light side or the Dark.

But whether it’s being left up to you through player choice—and often as only as an alternate “what if” than the actual reality of the story being told — or through guided story beats, more often than not those Imperial protagonists have, at some point or another, eventually become Rebels. (The original Battlefront II, interestingly, was the inverse, casting you as a Clone of the 501st division while the galaxy transitioned from the fall of the Republic to the rise of the Empire.)

And really, that’s part of the fantasy, right? There’s a thrill in getting to play from the bad guy’s perspective, yes, but an even greater one in thinking we’d be able to, when put in their shoes, make the choice to rebel. Or if it’s a dictated story beat rather than a player choice, that our protagonist would be able to see—as we do—that they’re working for an institution that does horrifying, unconscionable things, and that continuing to aid it in any way is wrong.

But Maarek Stele doesn’t do that in TIE Fighter. 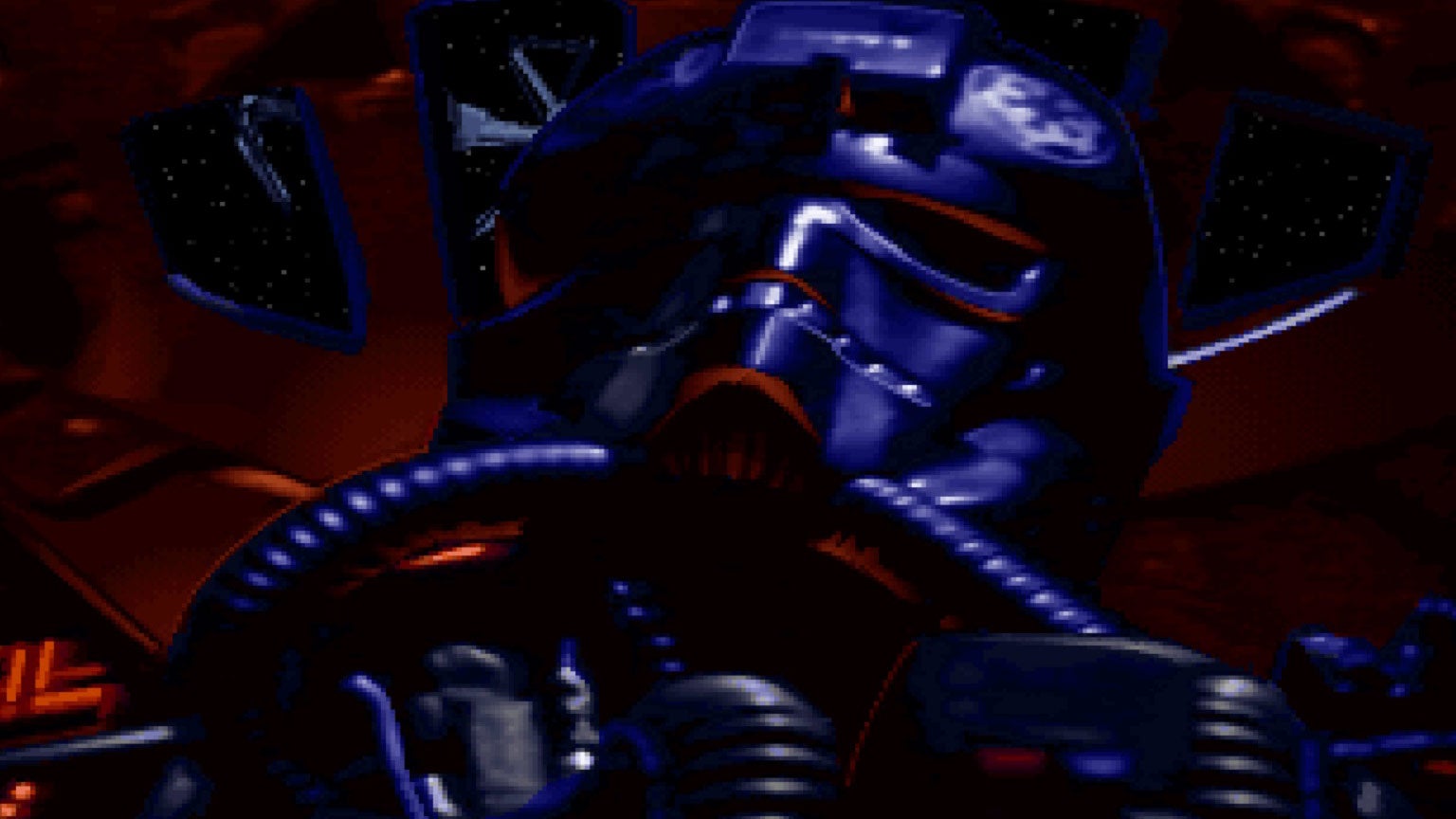 Set in the wake of the Rebellion’s defeat on Hoth and progressing all the way into Return of the Jedi, TIE Fighter’s campaign (and that of its two expansion pack continuations) is told strictly from the perspective of someone not just loyal to the Empire, but fiercely so. Mission after mission sees the player, as Stele, defending Imperial interests in ways both big and small. Sometimes you’re on patrol duty, looking out for potential Rebel operatives as they sneak about hyperspace lanes. Sometimes you’re flying escort for Imperial bigwigs (like Admiral Thrawn, at one point) or going on missions to destroy Rebel bases.

When you’re not fighting the Rebels directly or dealing with nebulous space pilots, your enemies are traitors in your own ranks, as Stele uncovers duplicitous admirals plotting to overthrow the Emperor, and rebel spies where he thought he had commanders and confidants. As he rises through the ranks of the Imperial Navy throughout his campaigns, Stele finds himself drawn ever further into a secretive branch of the Empire known only as the Secret Order and Emperor’s Hand, a faction directly control by Palpatine and even branded with Force-Lightning-imbued tattoos.

And yet, Stele never wavers — or, in the brief moments when he does, it’s to despair that forces both Imperial and rebellious see him as little more than a pawn to be jockeyed over and not a fearsome pilot to respect, instead of seeing the Empire as potentially in the wrong. Even when the Empire imprisons his father for aiding the Rebellion and he finds himself longing for a simpler life outside of the military, Stele chooses to stick around, in the hopes that his loyalty might grant his family lenience. 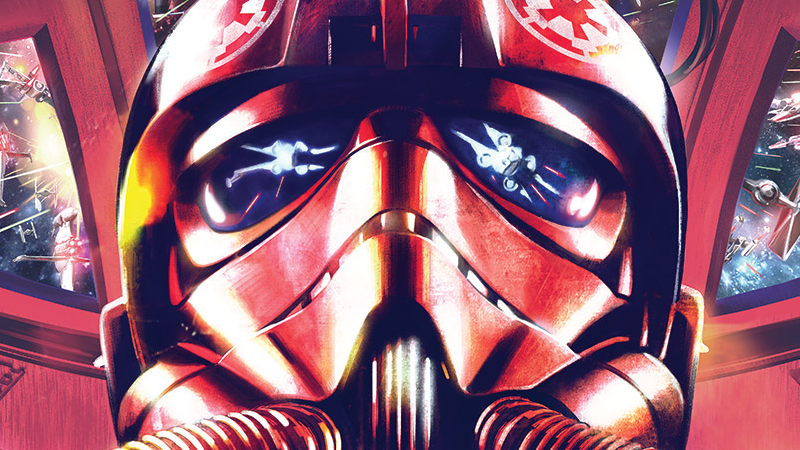 In the expanded material connected to the game, the character expresses dismay over the way that certain parts of the Empire are run, but despite that, he keeps to himself. He follows orders. He continues to believe that no matter the ethical cost, no matter the machinations that unfold around him, ultimately the Empire’s ideal is right. The true antagonist of the game, Admiral Zaarin, is an Imperial, but the reason you’re fighting him is to prevent him from overthrowing Palpatine in a coup, not because you end up turning on the Empire. Throughout TIE Fighter, Stele, and the player, remain loyal.

It’s hard to imagine a Star Wars story doing the same thing today. If only because today we’re critically aware that it’s much harder to swallow the gung-ho idea of the Good Imperial, an uneasy hero on the wrong side that’s just following orders. The idea of removing the Empire so completely from its real-world fascist inspirations that it just becomes a nebulous side in a nebulous conflict that’s worth understanding the viewpoint of — or gleefully selling merchandise for — without acknowledging its obvious tyrannical overtones is, in a modern climate, dicey at best. Hell, even acknowledging the simple fact that it’s spearheaded by a cacklingly evil villain and people who run around in planet-killing, moon-sized weapons of mass destruction, and being complicit in that, can’t be made up for with platitudes of being someone who just follows orders.

Inviting nuance to Star Wars’ portrayal of the Empire doesn’t necessarily mean having to have the Good Imperial—especially when nuance can be added through providing that familiar thrill of a hero who does choose to reject the establishment they signed up with. Nuance can be found in navigating how they deal with that realisation, rather than how they live while being complicit with it. For every Stele there’s a Biggs Darklighter, or an Iden Versio, or a Yrica Quell. And while in today’s TIE Fighter #1 we’ll meet Shadow Wing, both solicit information for the issue and Alphabet Squadron’s premise have already told us to expect a group of elite Imperials who are likely going to have some similarly wavering adherents among their number.

Fifteen years on from his debut, Maarek Stele is a rare breed in the Star Wars universe — and perhaps that’s for good reason.