When I first moved to Japan at the turn of the century, I was told that noodle lovers need not fret about making slurping sounds while eating. Among some, that attitude is changing. There is now concern over “noodle harassment.”

Or in Japanese, nuuhara (ヌーハラ、which is short for “nuudoru harasumento”). The word came to a wide audience in fall 2016 when Japanese morning show Tokudane! (via Matome Naver) did a noodle harassment segment.

Co-host Rei Kikukawa had to explain what the heck “nuuhara” meant to the Japanese viewing public.

And what did visitors think of Japanese noodle eating habits?

Those Swedish folks visiting Japan for the first time thought the noodle slurping sounded like a pig.

These visitors from the U.S. thought the same.

This New Zealander visiting Japan for the first time said it made her feel like not sitting in the seat next to a slurper. 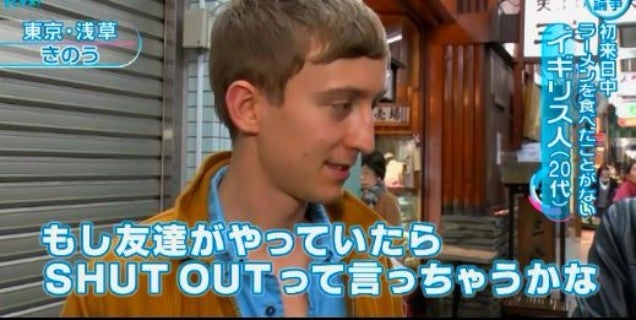 This young man from the U.K. said if his friends slurped like that, he might tell them to shut up. [The Japanese subtitles have incorrect English.] 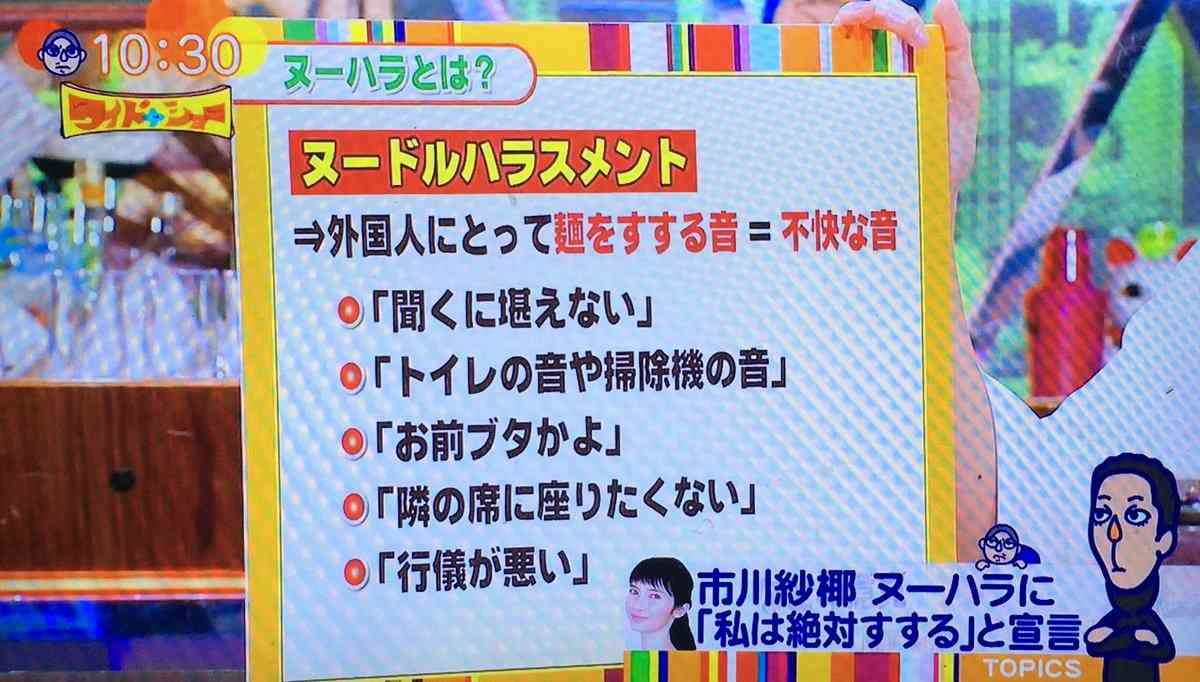 Here, on another show, listed reasons why (some?!) foreigners don’t like slurping. Included was the previously mentioned pig noises as well as other complaints, such as how noodle slurping apparently sounds like a toilet flushing.

OK. Sometimes television, especially morning television, in Japan can be a bit overblown. Yet, long after the segment aired, people continued to talk about nuuhara online.

Much of the reaction in Japan was people feeling like they should eat noodles however they liked in their own country. I agree!

But as Excite News pointed out, there’s concern about how this will look during the Tokyo Olympics if visitors are getting annoyed at restaurants across the city.

The top of noodle harassment continues in 2019! Recently, the Japanese media once again covered it as part of “sound harassment” (音ハラ or oto hara). This man from France said that he’s bothered and annoyed with someone slurps next to him.

The Twitter user who posted this screenshot did point out that these days most young women in Japan do not slurp. No doubt, among certain segments of Japanese society, the food culture is changing.

Slurping noodles is not unique to Japan (here, Anthony Bourdain is teaching President Obama how to slurp noodles in Hanoi.) Plus, not every Japanese person slurps. Some cannot, while there are those who do think it’s bad manners.

Of course, not all foreigners are against noodle slurping! Hiroshima Toyo Carp first baseman Brad Eldred says that he slurps on purpose because he knows it pisses off other foreign players.

Most Japanese noodle aficionados, however, do slurp to varying degrees of slurpiness. Why? There are several reasons, with one being that noodles are hot, so slurping them helps cool them. Another reason includes that noodles are a working person’s food, so manners can be checked at the door.

But the best reason I’ve heard is that by slurping, the noodles and their broth taste better, because you as slurp, you are opening up your nasal passages and inhaling all the soup’s delicious scents. If you were to just bite off noodle pieces, you’d miss all those aromas and flavours.

So, for goodness’ sake, if you are eating noodles, whether that’s ramen, udon, or soba, please slurp. If anyone gets annoyed while you are doing that, pay them no mind because they’re missing the point entirely.