While it’s true that kart racing clashes with the idea of a character who runs super-fast, Sonic the Hedgehog is less likely to trip up when he’s driving a vehicle. Developer Sumo Digital proves that statement true a third time with Team Sonic Racing, a very good kart racer with a game-changing co-op twist.

This story has been republished to coincide with Team Sonic Racing‘s release today.

Sonic & Sega All-Stars Racing and Sonic & All-Stars Racing Transformed are a pair of very good but relatively basic kart racers. Both did a fine job of covering the kart racing fundamentals: Cool characters in colourful karts race through convoluted courses, drifting for speed boosts and grabbing item boxes filled with weapons and power-ups.

The second game in the series mixed things up by having vehicles transform from car to plane to boat, very much like Nintendo’s Mario Kart 7, but both games were solid but basic.

I enjoy them, even if some of my former colleagues do not. But if you take away the cast of nostalgia-inducing Sega characters and strip away the fan service-caked tracks, the All-Stars games could be any kart racer.

Team Sonic Racing is something different. For one, it exclusively features Sonic series characters, instead of drawing from the entirety of Sega’s vast stable of fan favourites.

Built on the All-Stars engine, it has the same solid base as its predecessors. The kart controls are tight and intuitive. Drifting is satisfying, and the resulting speed boost is a nice reward for a curve well-taken. During jumps players can tilt the right analogue stick to perform tricks, gaining a burst of speed upon landing.

The difference is teamwork. Though players can race alone in Team Sonic Racing, the game’s primary focus is on teams of three racers working together to win.

When one team member gets behind another, one can ride the other’s trail, using it to slingshot forward in a burst of speed. If a racer has been slowed by a hazard or hit with a nasty Wisp, a teammate can drive closely past them, giving them a “skimboost” that ups their speed and gets them back in the game. Teammates can even offer item boxes to each other and transfer Wisps back and forth.

Performing team actions charges up a team’s “Ultimate Meter”. Once full, racers can activate a “Team Ultimate”, gaining super-speed and invulnerability for a brief period.

Teamwork adds a fresh element to otherwise standard kart racing fare. The trail of a teammate ahead of you is a welcome sight while you’re struggling to catch up with the pack. Missing out on grabbing a Wisp while passing a line of item boxes, only to have one of your teammates offer up their own, is beautiful.

And in kart racing’s darkest moment, when all the missile Wisps and laser Wisps and eagle-but-secretly-blue-shell Wisps hit you at once, having a teammate skim by and boost you out of despair is like the heavens opening up and angels singing. I might cry.

Teamwork mechanics work even when playing single-player. I was worried that not having real people controlling my teammates would negate the benefits of the team system, but time and time again my AI compatriots proved that wasn’t the case.

They use lines of spoken dialogue to let me know when they’re lining up for a boost or offering up an item box. They stick with me as best they can. When I am at the front of the pack, they strive to catch up. When I fall behind, they drop back to offer assistance

I’d go as far as saying the AI racers are more reliable than the humans I’ve been grouped with during my pre-launch online sessions, who I imagine were just a bunch of dirty game journalists and the odd influencer.

It takes a well-organised trio to excel at team-based online multiplayer Team Sonic Racing. I’m looking forward to seeing how the community grows and plays once the game goes live. 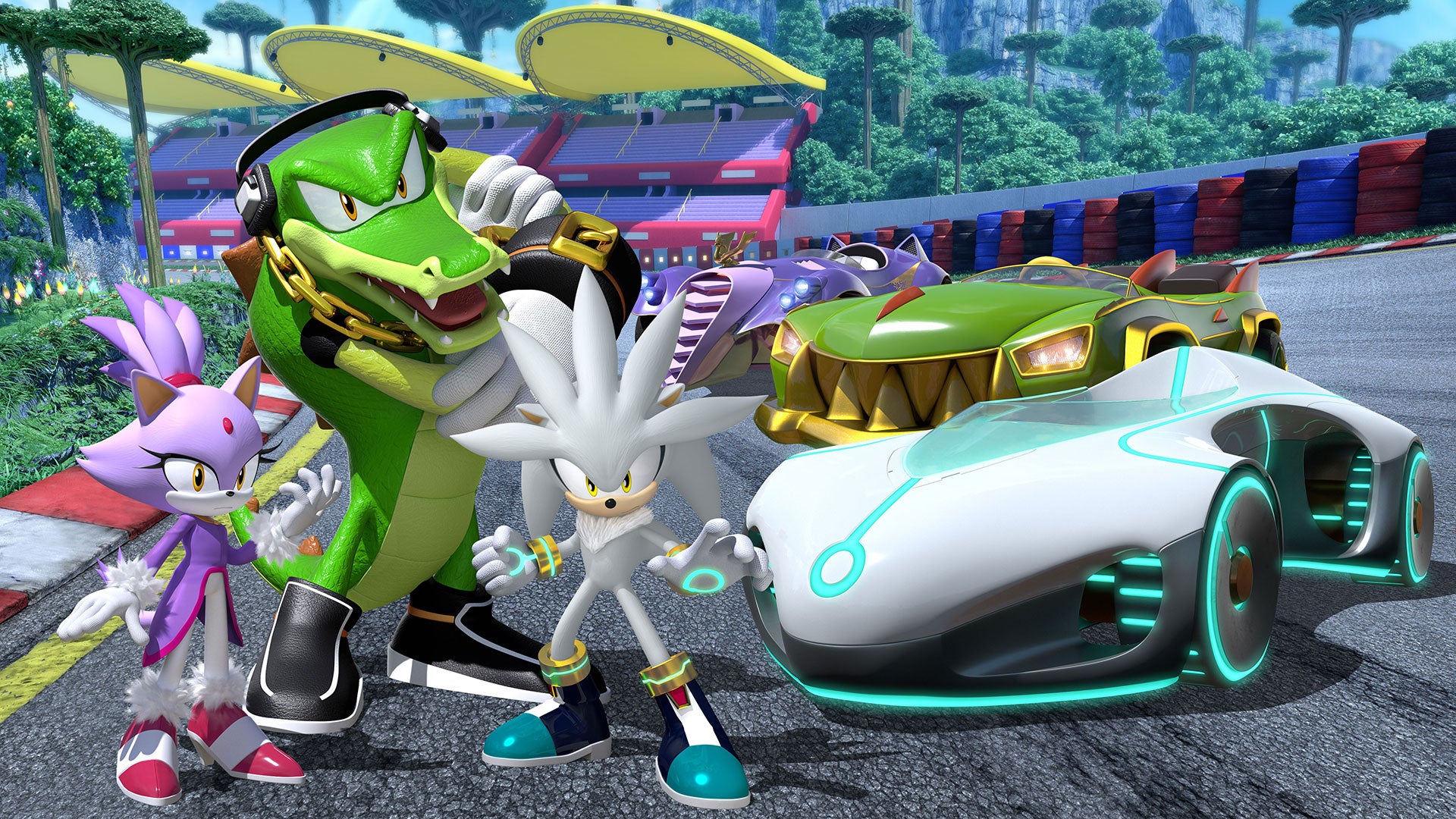 Mario Kart, Only With Sonic

Daredevil races are BS and should be set on fire

Spent eight hours on single-player story mode, one hour or so with online multiplayer and another hour customising Blaze's car

There is a downside to racing as a team. When a race ends, each racer is given a score based on their finishing position. The scores for each team are tallied, and the team with the highest points wins.

This can lead to situations where, no matter how well my favourite Sonic character Blaze the Cat races, there’s always the possibility that stupid Silver and Vector drag her down, those bastards.

It’s particularly harrowing during four-track Grand Prix races, in which you watch the point tally rise and drop as you get deeper into the set. But drama is good, right? 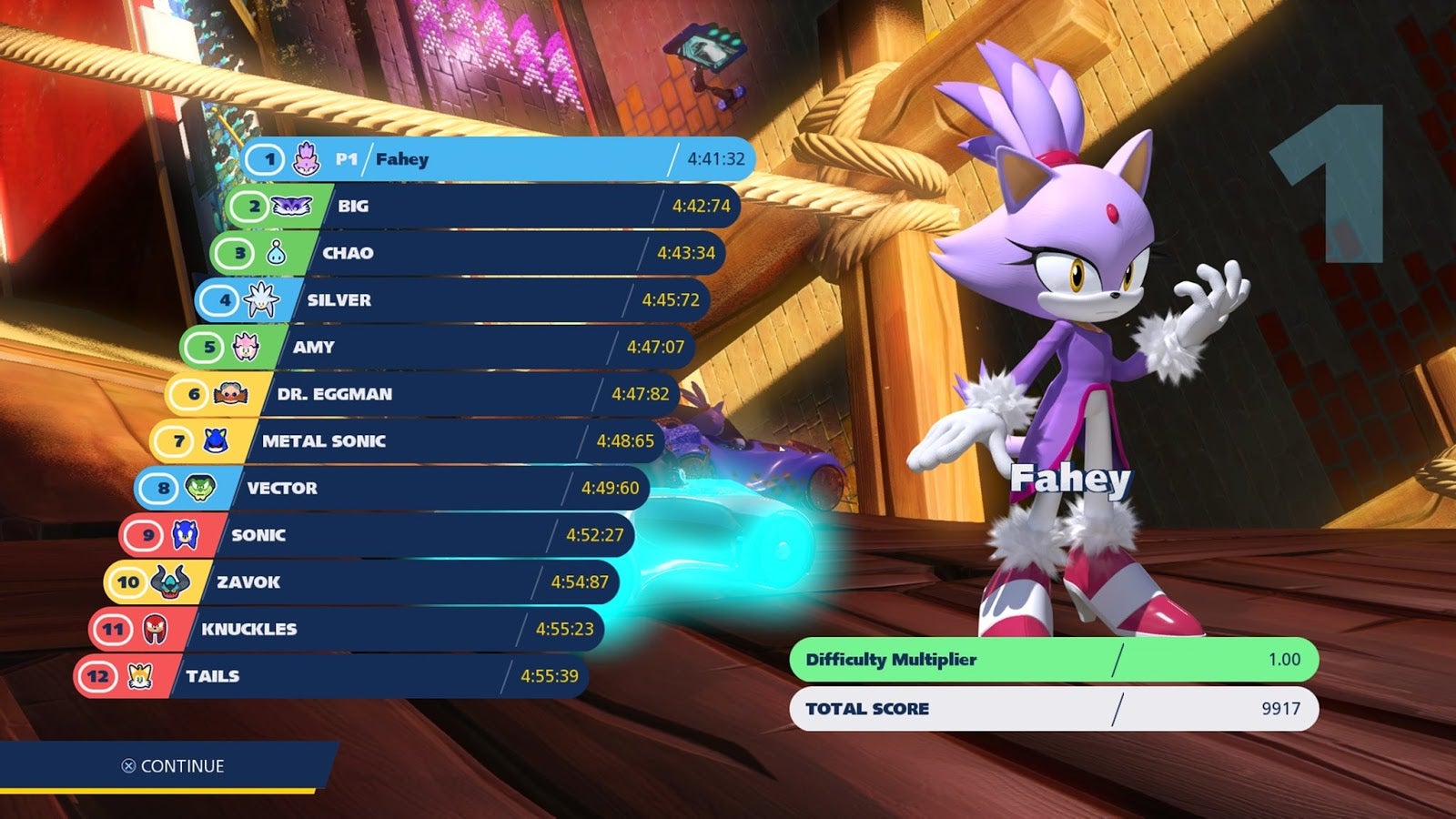 The bulk of my time spent playing Team Sonic Racing so far has been in the single-player Team Adventure mode, which has no shortage of drama.

A tanuki named Dodon Pa recruits Sonic and his fabulous furry friends to race in order to harvest the team energy needed to create an Ultimate Energy Engine, a device capable of generating power for the entire world.

At first it’s just Team Sonic, consisting of Sonic, Tails and Knuckles, facing off against Team Amy, featuring Amy Rose, a group of adorable Chao and Big the Cat. As the story progresses everyone is joined by Team Blaze, which is the best team. Eventually Shadow, Rogue and Omega show up as well, but who cares because Blaze. 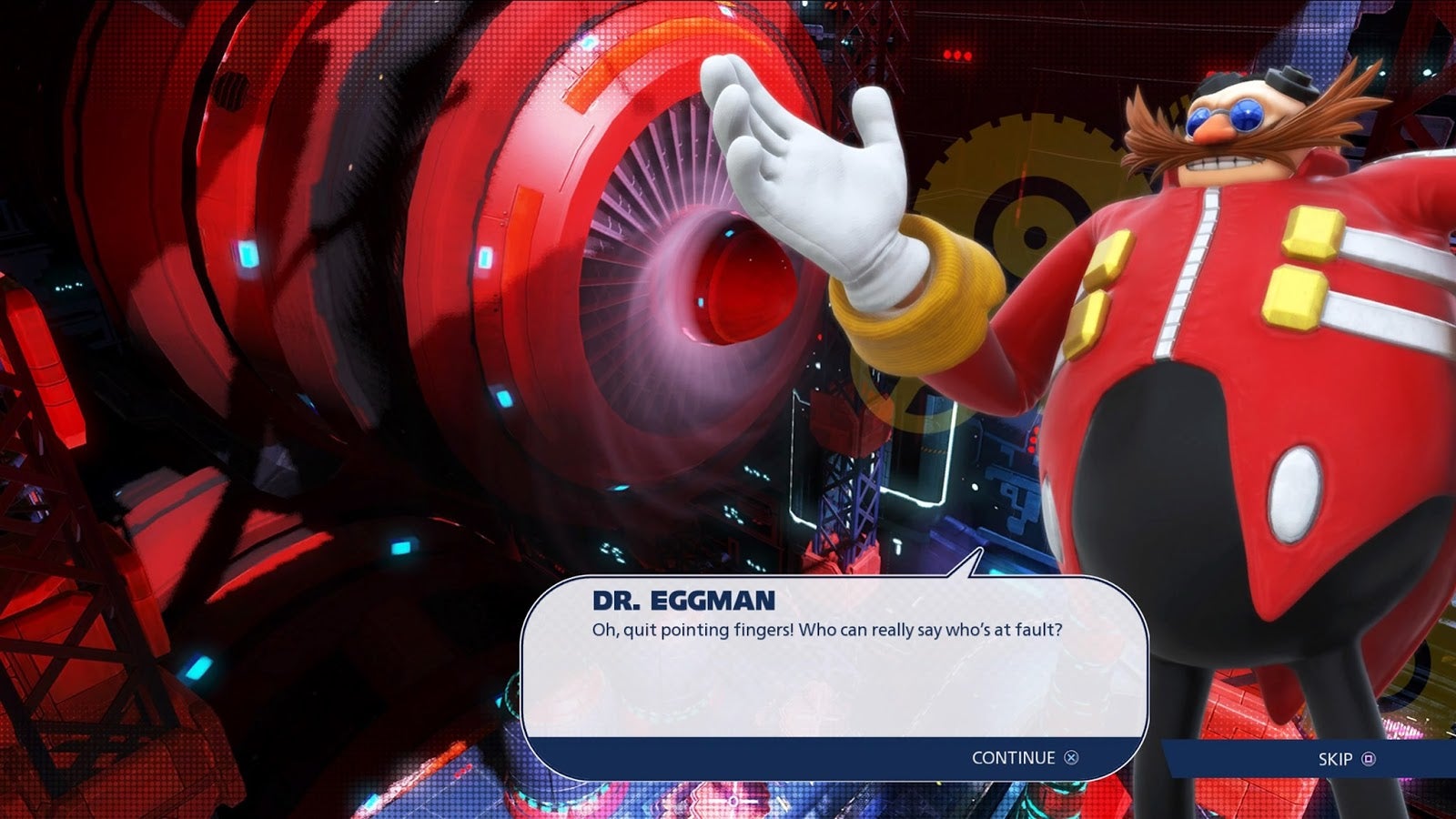 Then Dodon Pa invites Eggman to the party, who brings along Metal Sonic and Zavok, the demon-looking guy who debuted in Sonic Lost World. This proves to be a bad idea. No one saw that coming.

I appreciate there being a story, rather than just a series of racing cups to complete. I would have preferred something more dynamic than visual novel-style static cutscenes, but it’s better than nothing. Besides, there are far too many races to complete in Team Adventure mode to worry too much about character development.

There are seven chapters to Team Adventure mode, each made up of multiple racing events. Players don’t have to complete every event to finish the story, but it’s still a whole lot of racing.

Finishing chapter seven, largely sticking to as direct a path through each chapter as possible, I still managed to complete more than 100 races. I also performed over 600 stunts and 200 slingshot boosts. I only transferred three Wisps to my AI teammates, however, because I am a monster. 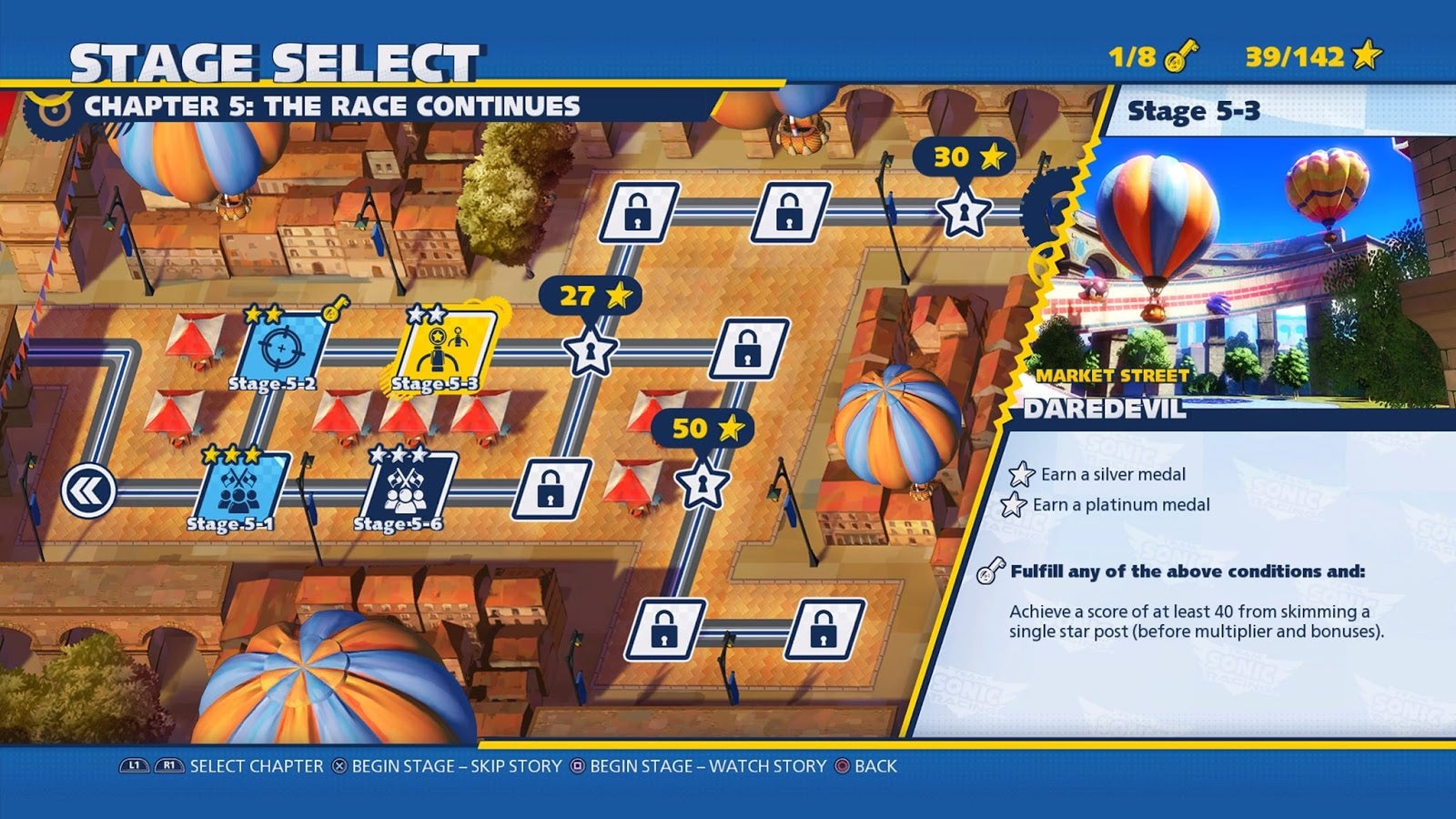 As players progress through the story mode they encounter several special events, each with their own unique goals and victory conditions.

Destruction events have players destroying targets as they race through a course, attempting to achieve medal-winning scores within the time limit. Survival races play out like normal races, only after every lap the racers in the last three positions are eliminated.

I particularly enjoy Eggspawn Assault courses, where players must use missiles and ramming to take out different types of Eggman robots.

I absolutely hate Daredevil races. Presented with little explanation, Daredevil races task players with drifting past slalom-style pylons. One side awards the player with points. The other side gives less points but creates a score multiplier that slowly drains as the player drives along the track.

I butted my head against Daredevil races again and again, never achieving more than a bronze, the lowest medal possible. I avoided the event type whenever I could. Then, in chapter six of seven, I encountered a Daredevil race that required me to get a silver medal or higher to progress.

I threw myself against that race for an hour. I emailed Sega PR to see if the developers had any tips — something I have never had to do before.

Ultimately, small shifts in any of the stats didn’t feel like they made a significant impact in performance. I did, however, really enjoy trying out different looks for Blaze’s car. She deserves to be pampered. 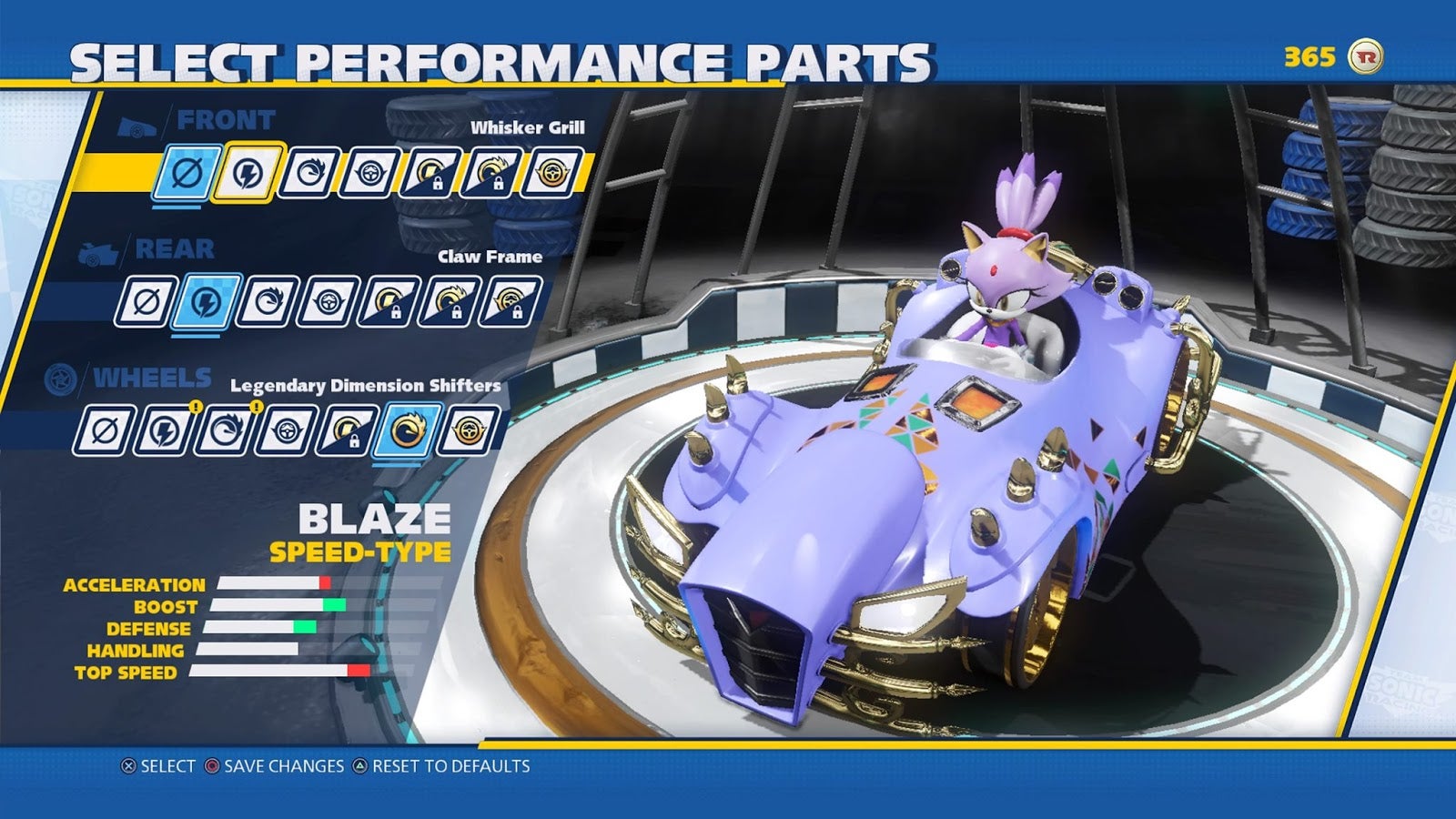 Finally, after much pulling of hair and gnashing of teeth, I just barely achieved the silver medal. I cheered. My wife cheered. I never want to do a Daredevil race again.

The good news is I shouldn’t have to. There’s plenty of racing to do in Team Sonic Racing aside from the one thing I hate.

Offline I can go back and complete all the non-Daredevil events I passed up while speeding my way (AKA racing for a good eight to 10 hours) through the story. Offline I can also participate in Grand Prix and exhibition team or solo races. There’s a time attack mode, in which players can race against leaderboard ghosts to try to improve their lap time across the game’s 21 courses.

Then there’s online, which I didn’t get much time with pre-release. I only got four or five online races in, but I liked what I played. There are ranked and casual modes for both team and solo races. Players can also create rooms for custom races, tweaking the difficulty and selecting which Wisps show up in item boxes.

Or I could just spend more time than anyone needs to spend adjusting Blaze’s ride. 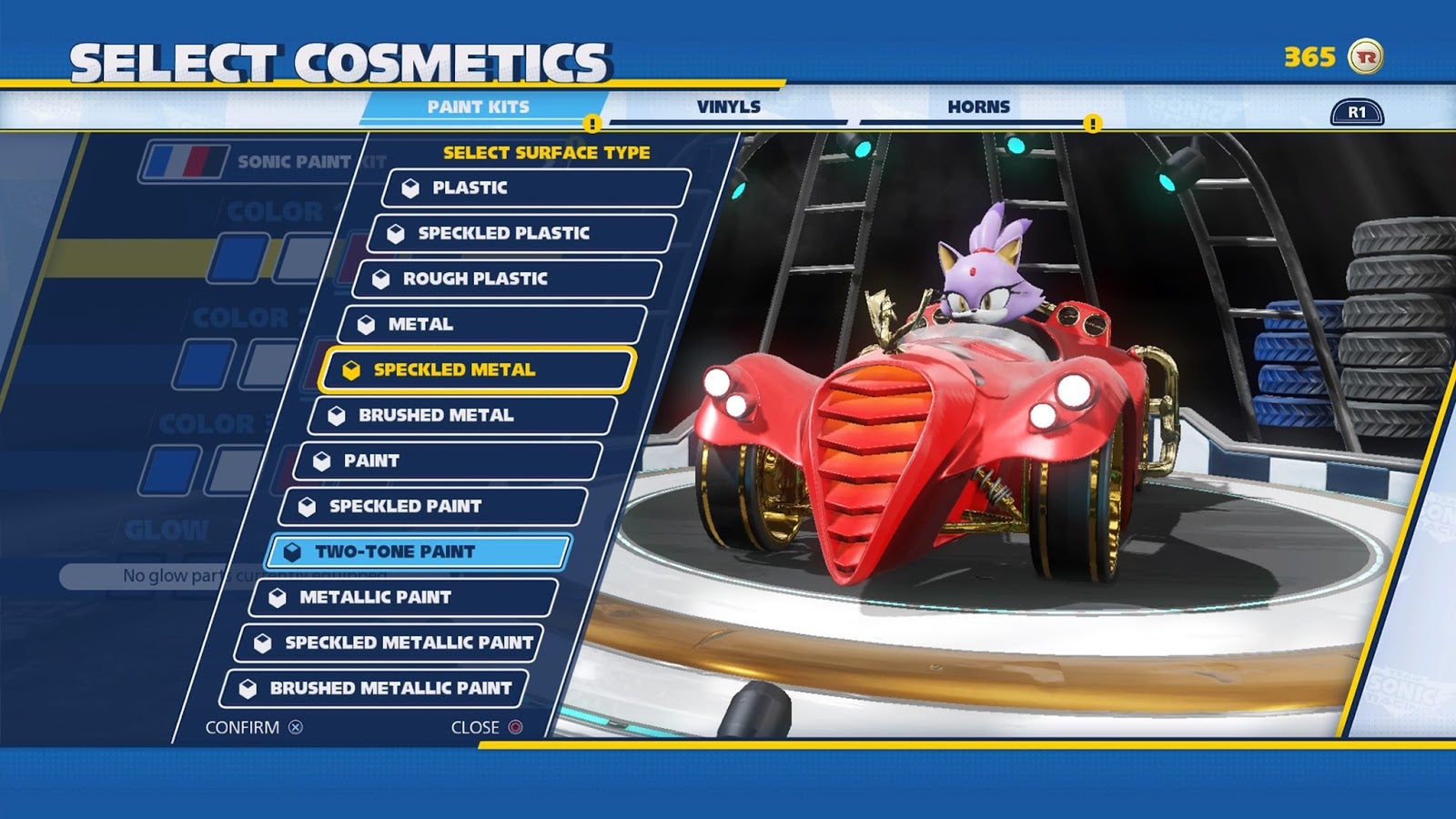 Mostly, I will race, because Team Sonic Racing is, as I mentioned previously, a very good kart racer.

A good kart racer is one where you can engage in more than 100 races in a short period of time and not get bored. It’s a game where, no matter how good you are, a random blue shell or its eagle Wisp equivalent can ruin everything at the last minute. It’s a game that feels good to play and looks good in action.

Team Sonic Racing is all of those things, with an intriguing team-based addition.