Players finally have a better way to earn more rewards in Call of Duty: Black Ops 4, besides the game’s unfavourable microtransactions system. This week’s update marks the introduction of Contracts on PlayStation 4, Xbox One, and PC.

Contracts serve as a series of rotating challenges that can be completed for in-game rewards. This system functions similar to Call of Duty: WWII’s Orders and Black Ops 3’s Contracts, but Treyarch has made some tweaks for Black Ops 4‘s implementation.

Reserve Cases, which are loot boxes containing one random cosmetic item, can still be earned just by playing multiplayer or Blackout, but Contracts offer the option to earn more rewards at a faster rate. More importantly, there’s something for everyone.

Contracts are available across all of Black Ops 4’s game types, meaning players can grind challenges in standard multiplayer, Zombies, Blackout, and the competitive World League. It’s great to finally see the Zombies community get included, especially since you can’t level up in the Contraband tiers in the same manner with Zombies.

Players can choose between regular or hard Contracts to earn Reserve Cases and bonus XP, and the latter grants a more appealing payout for the extra difficulty. Most of the regular Contracts I received when I tried this week only offered 1000 XP, but the hard Contracts reward 2500 XP and one Reserve Case. So, there are not as many Reserve Case payouts as some probably hoped for, but I think players will still be able to pocket a fair amount of cases after a week of grinding Contracts. 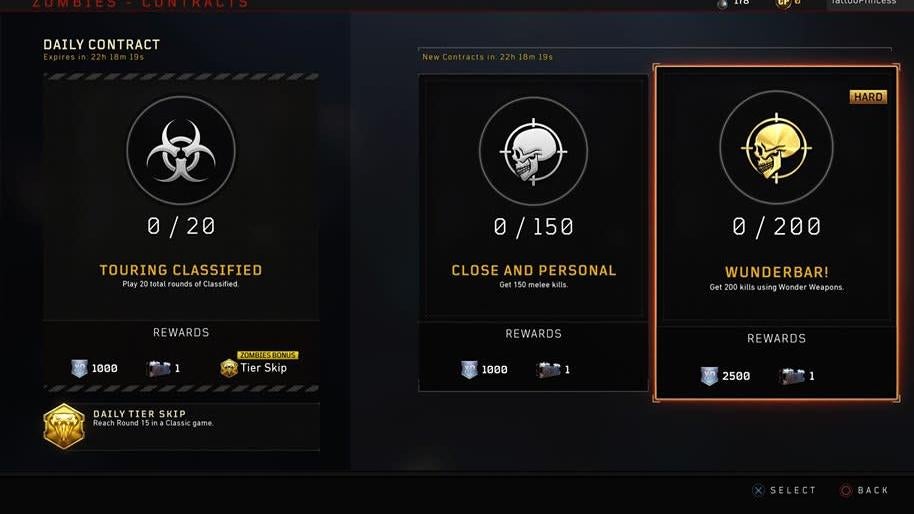 Each of the four multiplayer modes has one global daily challenge and six additional Contracts to choose from. For example, yesterday’s global daily for multiplayer was to simply play five matches of Search and Destroy. A hard Contract required me to kill two enemies with one grenade.

So, players will have 28 challenges to grind in a day, assuming they want to bounce from mode to mode. Two player-selected Contracts can be activated alongside the daily global challenge for each mode, and those extra Contracts can be swapped out without losing any progress made.

If I choose a Contract for X number of kills in Domination, but then decide I want to play a different multiplayer mode, I can swap the Contract and finish later. I’m pretty indecisive, so it’s great to know I won’t lose any Contracts or have to start them over. I just need to complete all of them before the refresh period, which appears to be 24 hours in all cases. 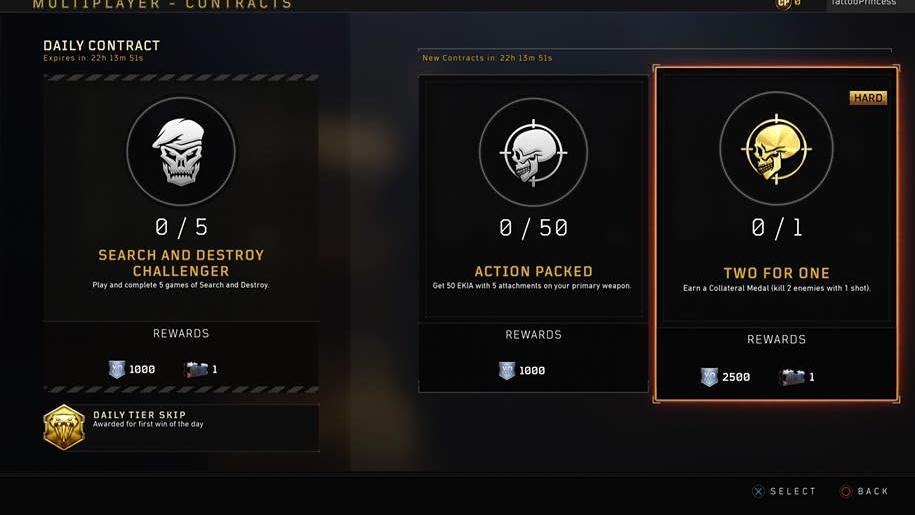 It’s a shame Contracts were introduced so late into Black Ops 4, but I’m glad to see unity with all platforms getting the content at the same time, and all modes included. Much of Black Ops 4 feels designed to tempt players to reach for their wallet, so Contracts will at least offer some extra rewards to those who want to enjoy the game without spending their savings on COD Points.

Black Ops 4’s microtransaction system has felt like a blatant money grab since its introduction last October, but Treyarch has most recently fallen under heavy criticism for locking most of the Days of Summer DLC guns behind the luck of loot boxes. Not to mention what else is happening over at Treyarch.

Obviously, Contracts don’t fix the game’s loot box hustle, but it does give players the option to earn more Reserve Cases, thus increasing the odds of getting what they want from a flooded market of gear.