A major overhaul is coming to Call of Duty: Black Ops 4’s Black Market. While loot boxes aren’t going away, players will finally have a better way of earning cosmetics.

Yesterday, Treyarch announced changes that are coming on November 12 to Black Ops 4’s highly-criticised Black Market—you know, that cosmetic marketplace that wanted to sell a red-dot reticle for a dollar? The redesigned Black Market will allow players to have a direct path to unlocking cosmetic items that were once locked behind the luck of loot boxes or packed into overpriced bundles that required the purchase of Call of Duty’s digital currency.

Black Ops 4’s Reserve Cases, which provide one random cosmetic item per case, will still exist as loot boxes that can be earned through gameplay. But now, players can choose to keep the cases unopened, and save them up to trade in for whatever specific cosmetics they really want.

The cases will still be earnable in the same manner: as rewards for completing specific in-game Contracts, levelling up beyond tier 50 in the Contraband reward stream, and simply by playing multiplayer and Blackout.

It’s going to require a lot of grinding for cases before earning enough to purchase the DLC weapons. It will cost a whopping 50 Reserve Cases to unlock either a DLC base weapon or weapon variant of choice, but it’ll be part of the new “Pick-a-Weapon Bribe” bundle, which also comes packed with two additional cosmetic items and a bonus of five duplicate-protected loot boxes. 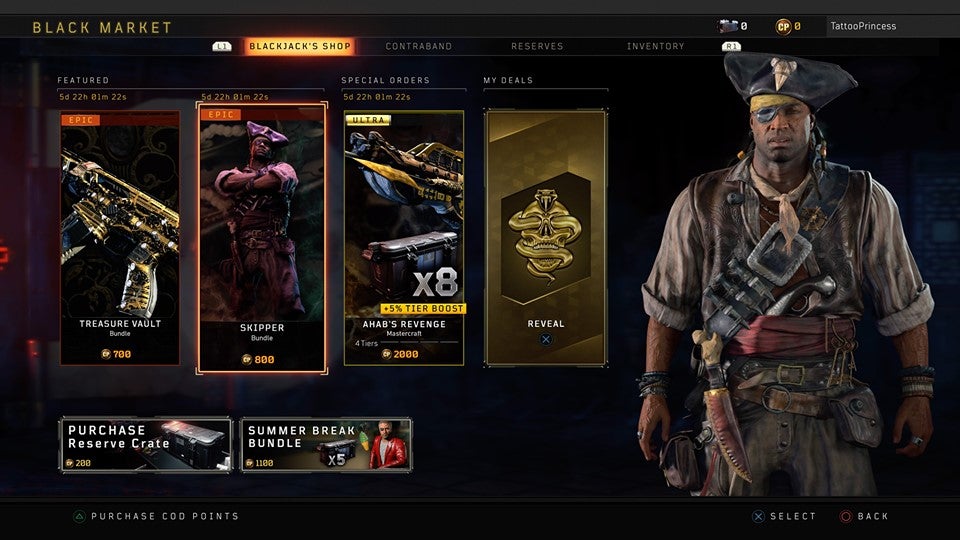 Maybe now I can finally get this awesome pirate skin.

Considering how flooded the Black Ops market is with unimaginative weapon charms and silly death effects that have to be earned for each individual gun, the grindy new system still stands to be a far better deal than opening cases for one item that’s not even protected from duplicates.

Cheaper deals will also exist for those who aren’t looking to add to their gun collection. The Black Market will continue to offer the typical sales of camos and character skins, but players will have the option to purchase these cosmetic deals at the cost of two Reserve Cases instead of dropping real money on COD Points. The updated marketplace will only showcase deals for items not currently owned, and Black Ops 4’s entire reserve of DLC cosmetics will be finally be viewable before acquiring the items.

This Black Market overhaul is filled with positive changes that will likely feel far too late for most players. The community spent nearly the entirety of the year asking for a more reasonable approach to Black Ops 4’s microtransactions, but change is scheduled to arrive after much of the player base has moved on to this fall’s Call of Duty: Modern Warfare.

Black Ops 4’s long-overdue update is likely a ripple effect from Activision just recently changing its tune with loot boxes right before last month’s launch of Modern Warfare. The new Modern Warfare completely ditches shady loot boxes in favour of earning cosmetic gear by completing in-game challenges and the upcoming battle pass system, so it’s nice to see the older Call of Duty get better loot treatment, even if the loot boxes are still there.