I’ve been a casual player of both Minecraft and of the augmented reality game Pokémon Go, so when Minecraft Earth was announced as an augmented reality version of Minecraft, I was curious. There’s a lot to Minecraft, so I was sceptical that the entire game could be scaled to a touchscreen experience on your phone.

After playing a demo today at E3, I can tell that the game is going to ruin my life. You can scale everything about Minecraft into a phone-sized game, and it’s a marvel.

The demo began with a look at a completed building—in this case, a stone building with a little farm and multiple levels., First I saw it at a smaller scale, sitting on top of a real-world table. Then, the developers pressed a button on the phone’s screen and then pointed the phone where they wanted to place the building. This scaled the building up to our size, the size of real life people. All the bricks, tools and animals were now all around us when we looked through our phones.

Both versions of this building were interactive, but I couldn’t touch or interact with every single block. While buttons are pressable, it’s easy to forget that the blocks aren’t solid. I amused myself for a couple seconds by walking through a fence to a pig pen.

The developers of Minecraft Earth told me that when you’re looking at builds that are scaled to the real world, you can only build two blocks high. Otherwise, you’d be craning your neck to put a roof on your house. Instead, you have a “build plate” you can set down on a table to build more ambitious buildings.

You’ll only be able to build in Minecraft Earth on a build plate, but you can place the build plate on any flat surface, like the ground or a table. It makes it easier to see all angles of your build and create really complex things. 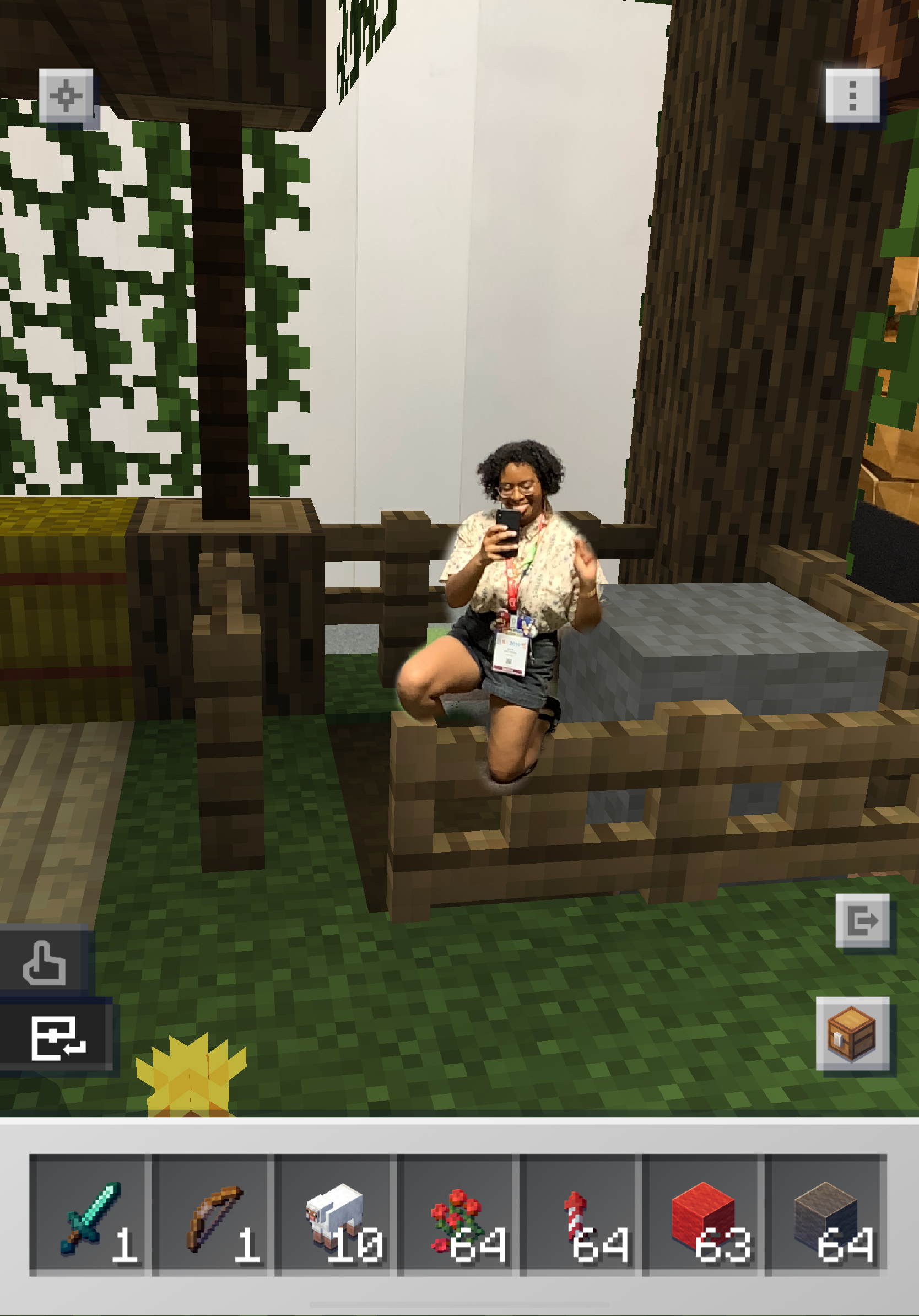 Once you step inside a full scale building in Minecraft Earth, the rest of the world feels like it melts away. As the structure populates in front of you, it’s difficult to take your eyes away from your phone, especially when you walk into and interact with whatever you created on your build plate.

The “people occlusion,” which is a feature coming with the upcoming version of Apple’s iOS operating system, allows everyone around you to blend into the game’s world seamlessly. I even liked looking down at my feet, seeing them step through Minecraft’s pixelated grass.

The Minecraft Earth developers explained that in order to get rarer blocks in this version of Minecraft, you’ll go on “Adventures” with friends. These Adventures feature familiar Minecraft mobs, like Spiders, Skeletons or Creepers, which you’ll have to defeat to reap the rewards.

Everything, even shooting arrows, is as easy as tapping on the screen. Because all the UI elements are taken from regular Minecraft, it all felt very intuitive. You just select the weapon you want from the taskbar at the bottom of the screen, and then tap on the screen to use it. We didn’t really go on a full Adventure, but I did get to explode a lot of Creepers. It was hard not to warn people who were standing near them not to get to close to the explosions.

I cannot envision a world in which I do not play Minecraft Earth. Looking at the game on your phone feels like looking into a different universe. What I liked most was how easy it is for other players to join your games. Like regular Minecraft, you can have other players join your session of Minecraft Earth. All you have to do is show the screen of their phone a QR code. After they link, they’re in your game and can fully interact with the world.

Although the beta for Minecraft Earth is still a couple weeks off, I’m impressed with the game as it is now. It feels like stepping into a dollhouse that you’ve built. That’s something I wanted when I was a little girl playing with dolls—it feels like a miracle that it’s become reality in my lifetime.