It’s the middle of winter, and way too cold to even think about visiting the Aussie beaches. But The Messenger’s free Picnic Panic expansion can fix that.

You won’t actually hear seafoam waves crashing along the shore or feel the grainy piles of hot sand beneath your feet, but Picnic Panic’s bright colours, catchy new chiptune-inspired melodies, and occasional ninja surfing offer a similarly chill and breezy seasonal escape. If you’ve already played and beaten The Messenger, then the new DLC, which is out now on PS4, Switch, and PC, will make it worth revisiting.

If, on the other hand, you somehow missed out on one of 2018’s best retro-infused indie action platformers, there’s no better time dip your toe in the water.

Set after the events of the main game, Picnic Panic sees the titular Messenger journey to an entirely new island called Voodkin to deal with a new mess stirred up by the demon general Barma’thazël. Though the story underlying the new DLC is paper-thin, that doesn’t really matter. The ninja parkour, boss fights, and challenging collectibles are all back, and they’re as satisfying as ever.

Time travelling portals return as well, and while the three levels that make up the new content aren’t as complex as their predecessors, there’s still enough backtracking and platforming puzzles to keep Picnic Panic feeling more on the Metroidvania-side of things (sorry, Josh) than just linear Ninja Gaiden-based side-scrolling. 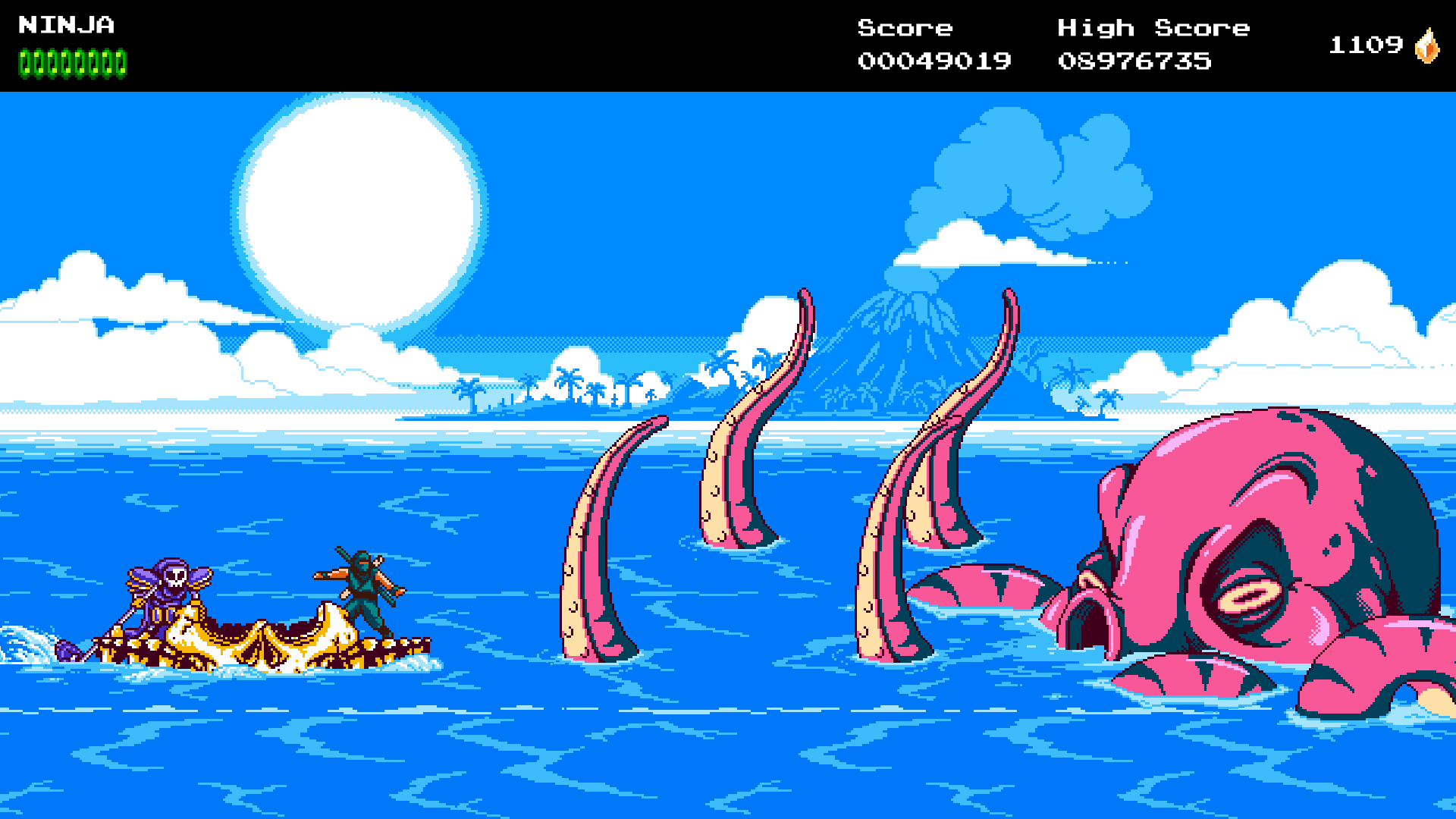 In addition to providing new paths to unlock, the DLC also offers more of the game’s most dazzling visual transformations in the form of a swap from an 8-bit-inspired present to a 16-bit-looking future, which happens every time the Messenger time travels. Going from vibrant seascapes to apocalyptic thunderstorms also helps mix up the levels and keeps the extended sections of backtracking from feeling tedious.

Like taking a dip in the ocean to cool off before retreating back under the beach umbrella, each time jump refreshes the experience, making up for when certain enemy types overstay their welcome or a familiar configuration of spikes emerges for the 10th time.

For veterans of the main campaign, it’s worth noting that there are no new abilities or upgrades to discover. Picnic Panic is meant to be tackled with the full arsenal of ninja tricks and gadgets, and in that respect, it’s more like new game plus territory. By that same token, anyone who hasn’t seen the credits roll yet will have to do so before they can get into the DLC.

While that might be frustrating for some who are eager to dive into what Picnic Panic has to offer, which also includes a Battletoads-esque surfing level, it has allowed the developers at Sabotage Studio to throw fights and challenges at the player that creatively draw on all of the Messenger’s skills.

In the first boss fight against a giant magical totem pole, each segment breaks apart to throw out fireballs, lightning blasts, and whirlwinds, all while you try to navigate bottomless pits and spikes. The pieces themselves also provide the stepping stones to get to the head, which is the only part of the boss that’s vulnerable.

Getting up the steps requires you to cloudstep (a double-jump initiated by either striking an enemy or getting hit), use the grapple hook, and then wingsuit your way through danger to get into position. It’s an excellent reminder of what Sabotage does so well, and also why The Messenger doesn’t just feel like another visually charming retro homage.

Every puzzle and fight in the game builds on mini-lessons learned along the way, until the final obstacle requires all of them to be creatively synthesized into an elegant strategy that never fails. Unlike some NES and SNES games that can be brutal just for the hell of it, The Messenger telegraphs solutions to all of its challenges, giving you just enough information to figure out what you need to do next to beat a boss or cloudstep through a labyrinth of death to get that final collectible. That design principle is present and assiduously implemented in Picnic Panic as well.

At around five hours long with a few collectibles still to go after, it’s exactly the kind of expansion I needed right now: challenging enough to keep me on my toes, but not so difficult or long that it felt like I was going back to complete unfinished work. I now wish more of my favourite indie games would send their heroes on tropical vacations.