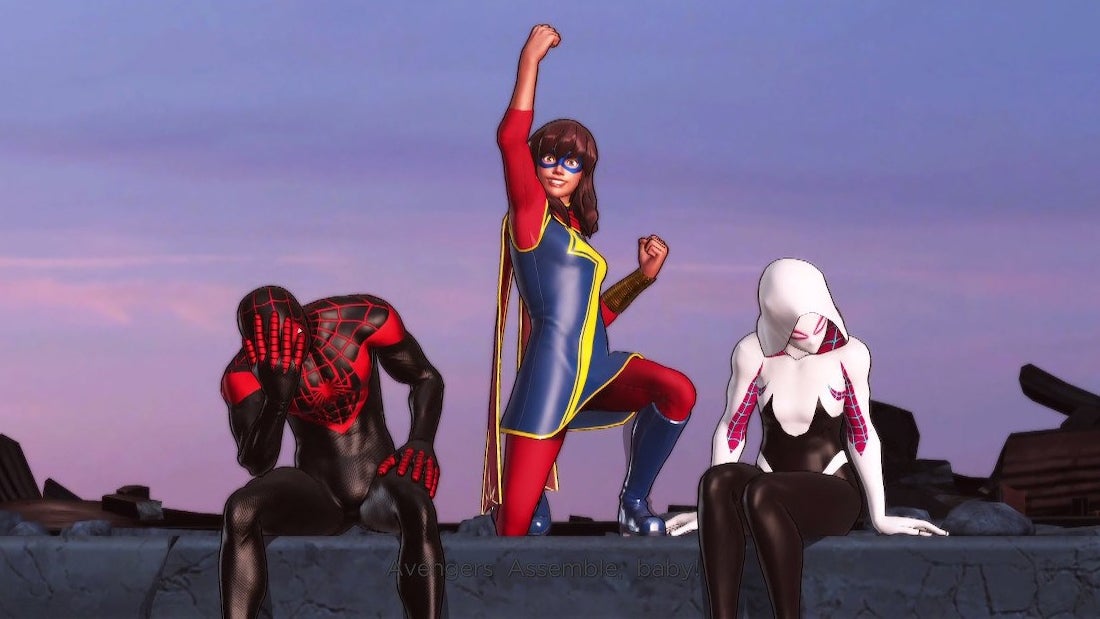 Marvel Ultimate Alliance 3: The Black Order is here, and there’s a lot to it. There are more than 30 different characters at launch, each with different abilities and skills to juggle, and menu after menu of ways to enhance and upgrade them. There’s so much to keep track of while you take on the most challenging entry in the action role-playing series yet. In lieu of harnessing the power of the Infinity Stones, we’ve got some tips that should help.

Know How To Do Synergy Attacks

Before we get deeper into the game’s systems, there’s one important mechanic Marvel Ultimate Alliance 3 doesn’t explain very well. Holding down the R button on the Switch controller gives players access to the special abilities of the character they are controlling.

When characters with complementary abilities activate them when nearby to the character you’re controlling, players can press the A button to fire off their own special ability, which then combines those two abilities into a new, more powerful form. That’s called a Synergy attack. What’s not really explained is how players can initiate Synergy attacks on their own. 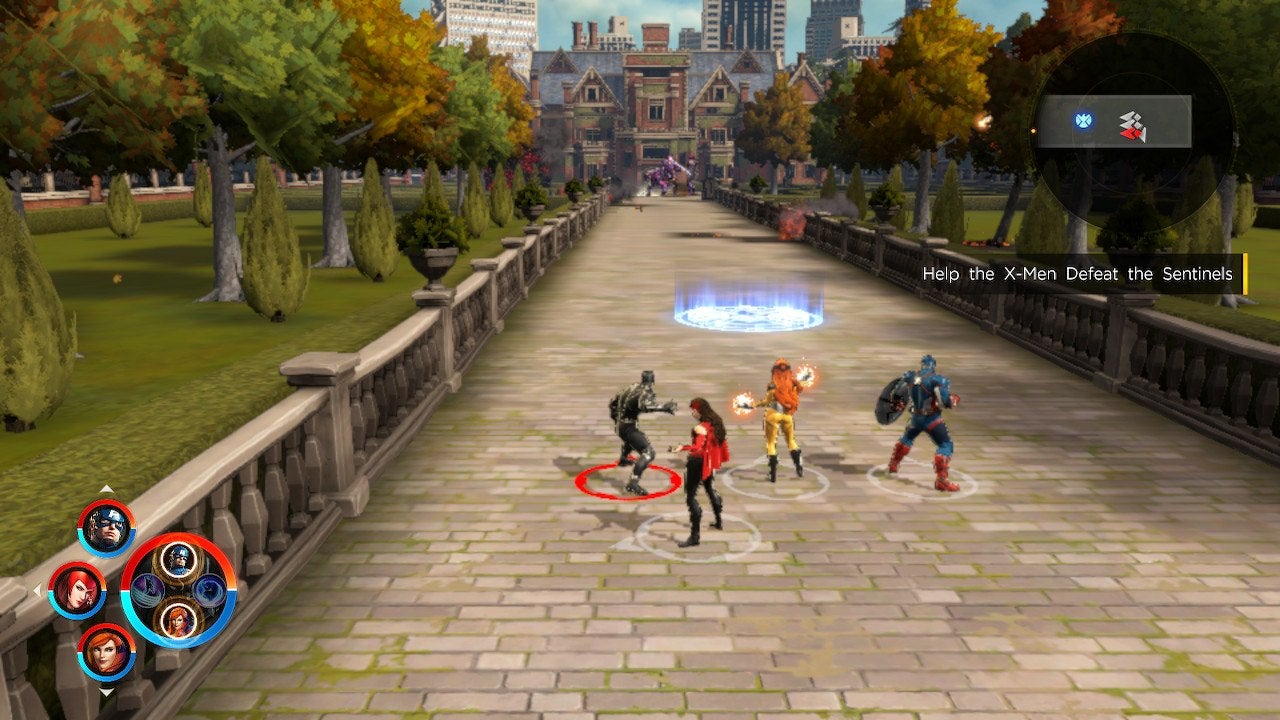 Holding down the ZR, or trigger button, also opens the ability menu, but now abilities are only highlighted if a nearby character controlled by another player or the computer can perform a complementary ability, activating a Synergy attack. In the screen above, I am controlling Black Panther. Holding down ZR shows I can perform a Synergy attack with either Captain America or Crystal.

VG24/7 has a great guide to Synergy attacks, including a table showing which abilities types work together and what they do.

Know Which Attributes Do What

Each character in Marvel Ultimate Alliance 3 has six attributes.

Now that we know which stats affect which attributes and abilities, it’s pretty easy to figure out which stats to focus on when upgrading a character. These upgrades involve assign points to the Alliance-wide enhancement grid or assigning stat-enhancing ISO-8. Let’s look at Ms. Marvel. 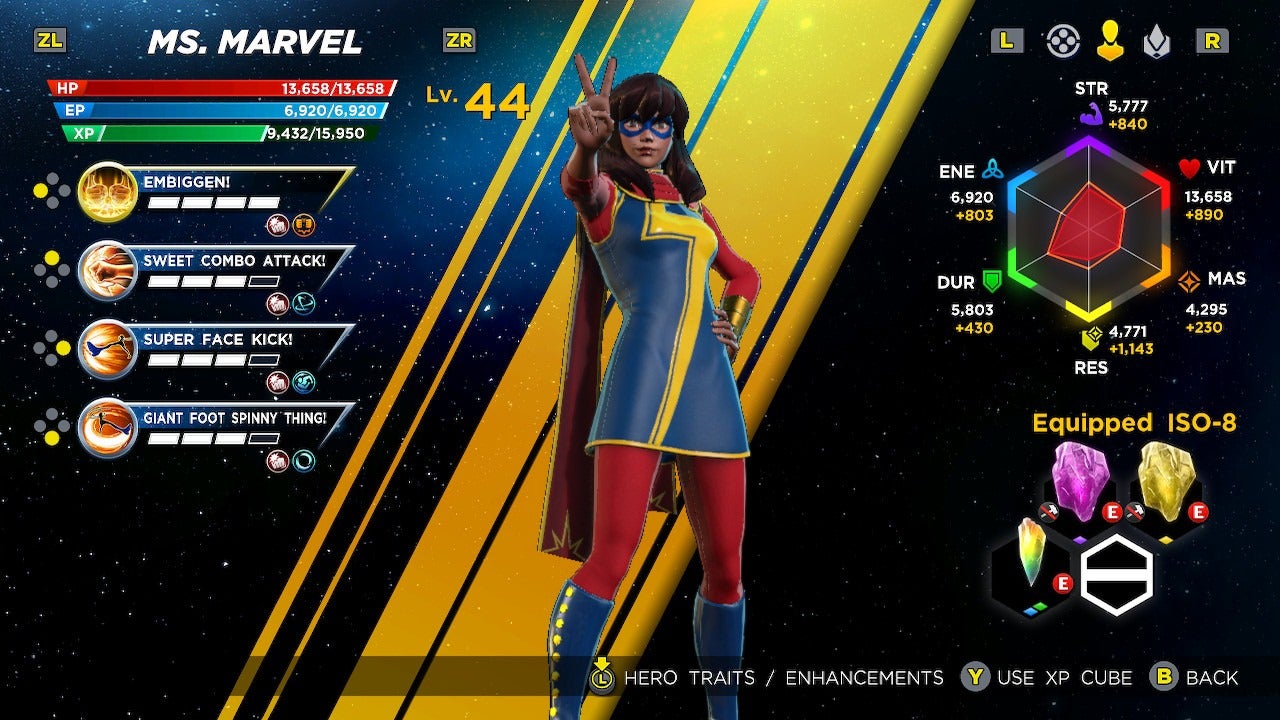 Ms. Marvel is a brawler. All of her attacks are physical, as denoted by the fist icon under her abilities on the left side of the screen. That means to do more damage, she needs strength. Since she’s going to be in the thick of battle, having a good amount of vitality is helpful, though good durability will keep her from getting too roughed up. Her resilience could be better, as magical attacks tend to tear her up. She is desperately in need of more energy, as her special attacks hit hard, and I would like to be able to use them more often. 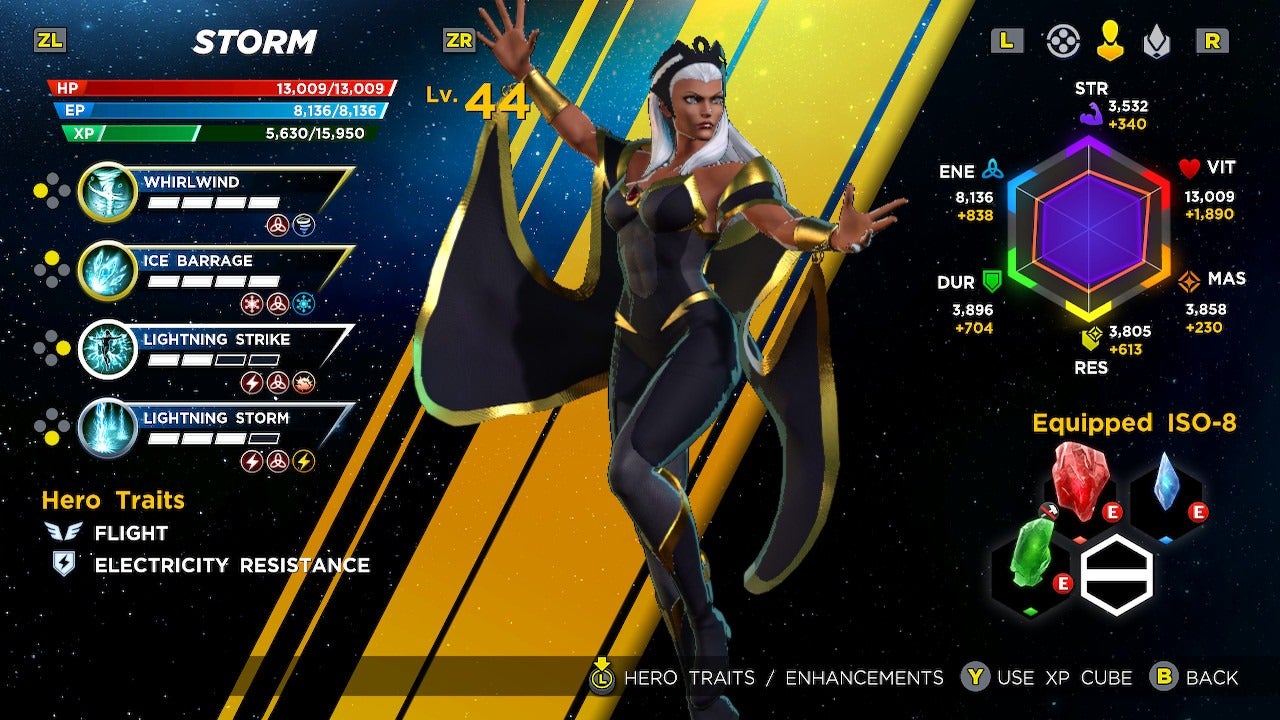 Storm is a ranged attacker, and her abilities all energy-based. She’s equipped here with a chunk of ISO-8 that greatly increases her health. I focus on energy and mastery for Storm’s attacks, because I want her to hit hard and often.

Level Up A Variety Of Different Characters 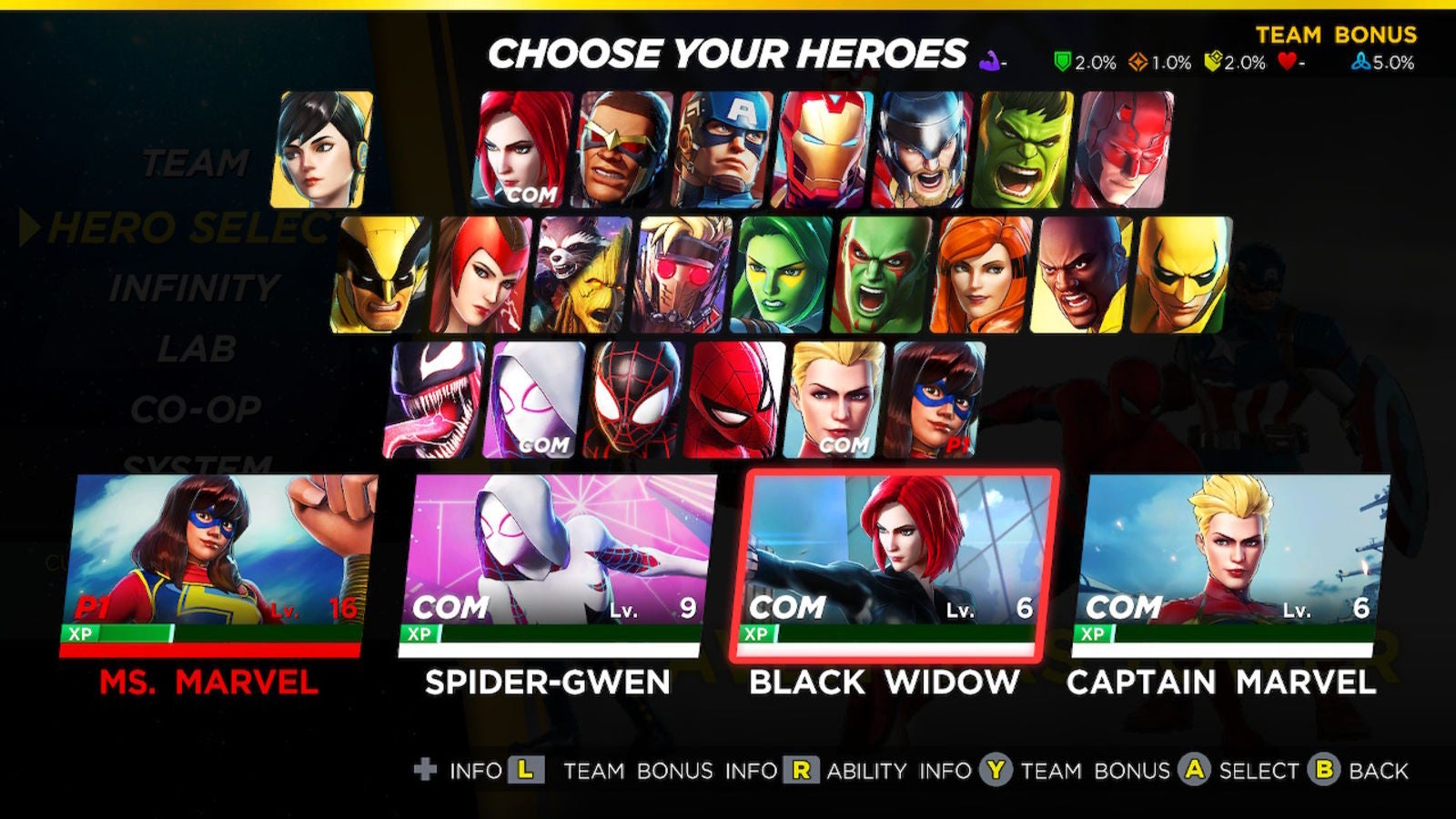 It’s tempting to create a party featuring four of your favourite Marvel characters and to just stick with them, but there are good reasons to have a wider range of party members at your disposal.

Team bonuses reward players with attribute bonuses for forming parties of heroes who share common ground. There are 29 different groups characters can belong to, from spider-themed heroes to the Women of Marvel to Ultimate Alliance newcomers. Teams consisting of two, three, or four members of a certain group gain small, medium, and large attribute boosts, respectively. 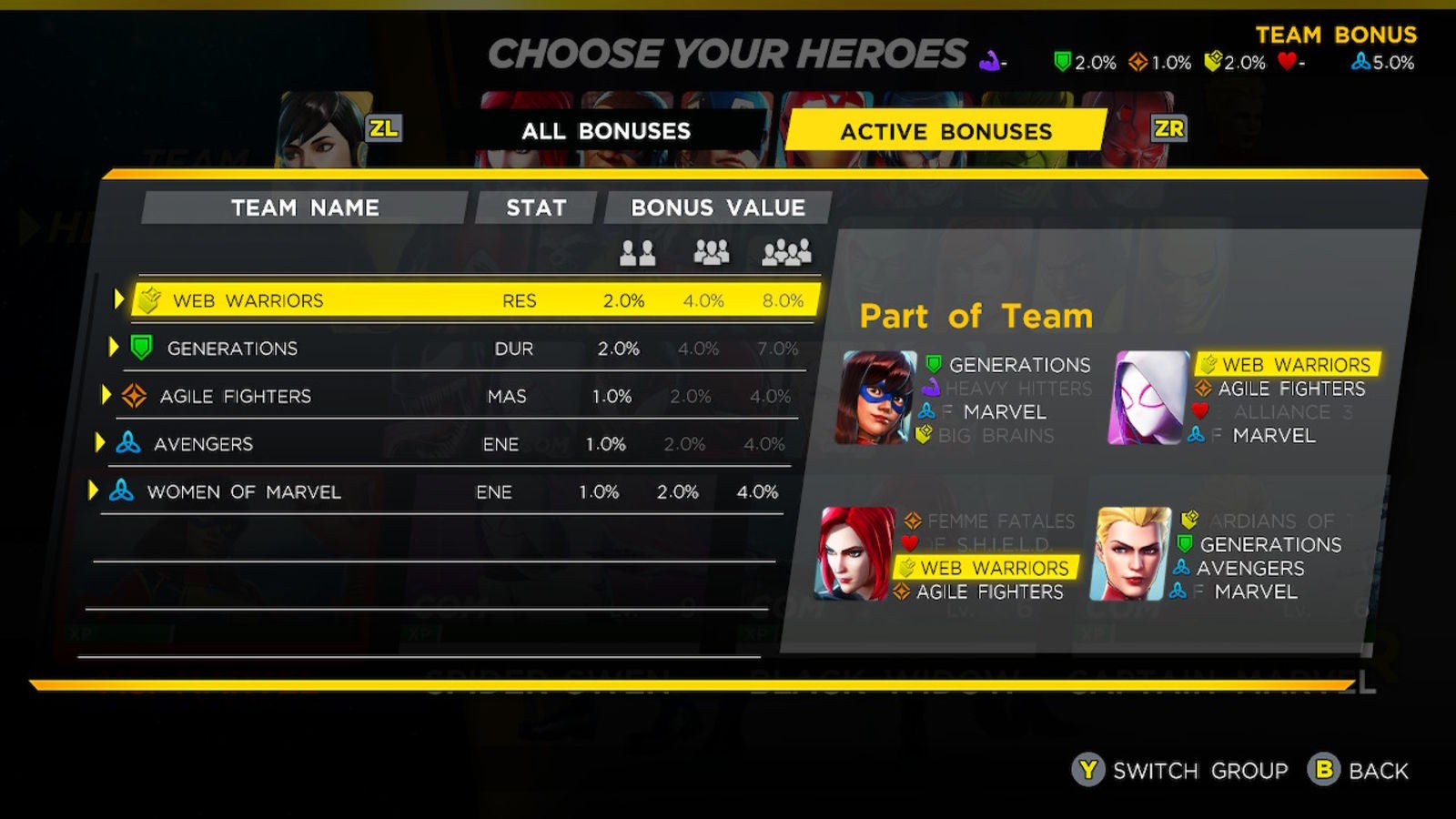 Team bonuses overlap and are cumulative, so a team can earn enhancements from multiple categories at once. I’m sure members of the game’s Reddit community are hard at work calculating the most bonus-laden team possible.

Have A Plan For The Alliance Enhancement Grid

Most of a character’s attribute bonuses come from the Alliance Enhancement grid. It’s a series of hex-shaped clusters where players can spend credits and enhancement points earned through playing to increase attributes for every character across the board. The centre hex in the grid is filled with less potent enhancements that don’t cost much. Filling out each corner of the central hex opens up six additional hexes, with upgrades that are more expensive and much more powerful. 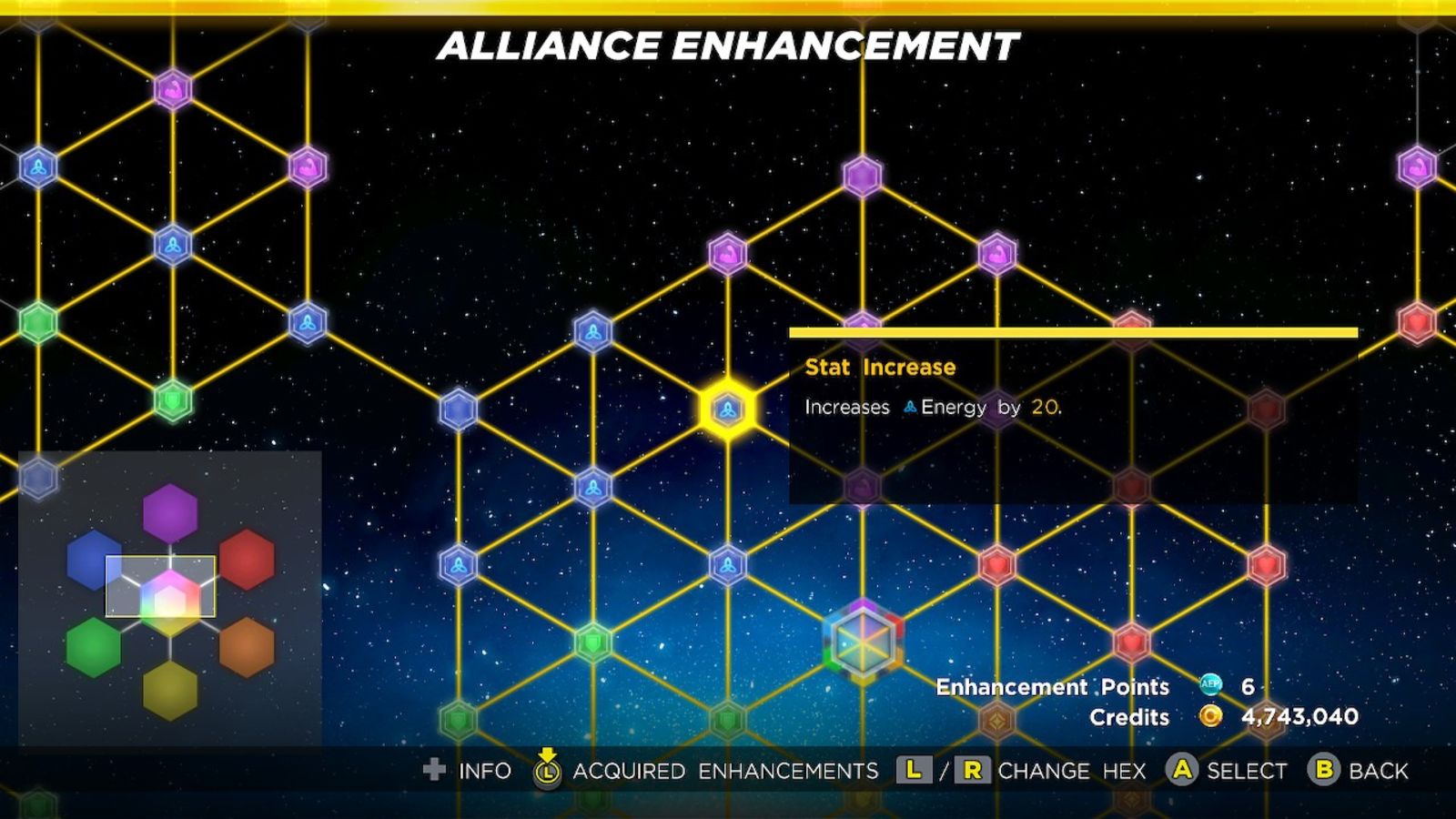 I filled out the centre hex and then started buying enhancements from the surrounding hexes at random, whenever I could afford to activate a spot. That was dumb, and a waste of points. Had I paid more attention, I would have realised earlier on that the centre spot on each hex contains an extremely useful upgrade.

The blue hex, for example, grants a 10 per cent experience upgrade when fully unlocked, making it easier to level up characters. I wasted so much time and so many enhancement points on the other hexes, when I should have been focusing on that one first.

Also keep in mind the composition of your party when unlocking Alliance Enhancements. If you’ve got a group of melee berzerkers, save the mastery upgrades for later, focusing on strength instead.

Don’t Be Afraid To Futz About With ISO-8

In the game’s third chapter, you start collecting ISO-8, which are magic space crystals that offer a wide variety of bonuses, from attribute increases to boosts to specific damage types. Soon after, players gain the ability to break down ISO-8 and reinforce it using credits and other in-game resources. Don’t be daunted by the menu. Tear that crap down and build it up. 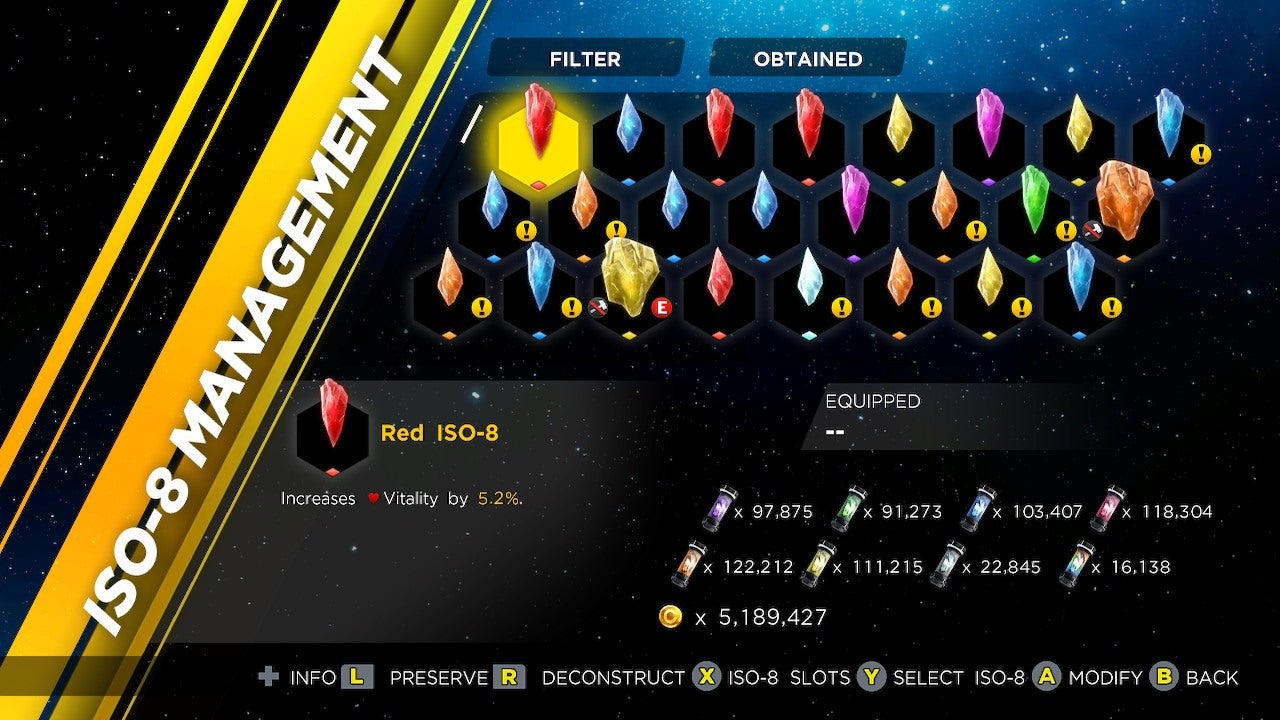 Between ISO-8 gathered or rewarded during the story mode and that which is acquired via the game’s optional Infinity side missions, you’ll be swimming in extra ISO-8 from here until Ultimate Alliance 4. There’s plenty for deconstructing and experimenting with crafting more powerful versions. The biggest, most rare pieces are protected from deconstruction automatically, and players can tag their favourite bits to preserve them. Safeguards are in place, so there’s no way to pull a Tony Stark here.

By the latter third of the game’s 10-hour story mode, enhancement points needed to unlock spots on the Alliance Enhancement grid become incredibly sparse. Higher level enhancements require a lot of points, and the story gets really stingy with them. What’s a player to do? 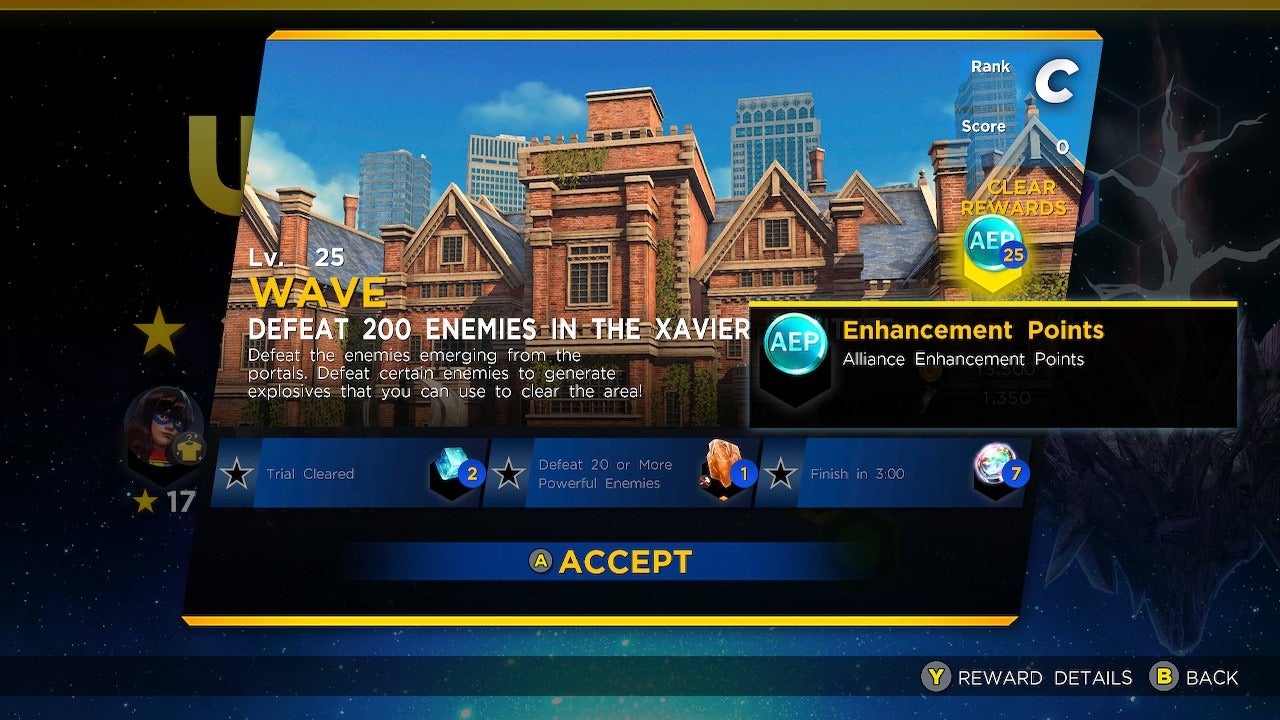 Infinity missions, that’s what. Enhancement points are one of the many rewards that can be harvested in the game’s side mission challenges, along with credits, ability points to upgrade character skills, alternate costumes, and the odd unlockable hero. Along with a wealth of resources, Infinity missions are also excellent bitesize bits of action that are perfect for a quick bathroom gaming fix.

If Something Drops, Pick It Up And Throw It

Marvel Ultimate Alliance 3 does not have a lot of random destructible environmental stuff. If an object appears with the option to pick it up and throw it, there’s usually a damn good reason for it. 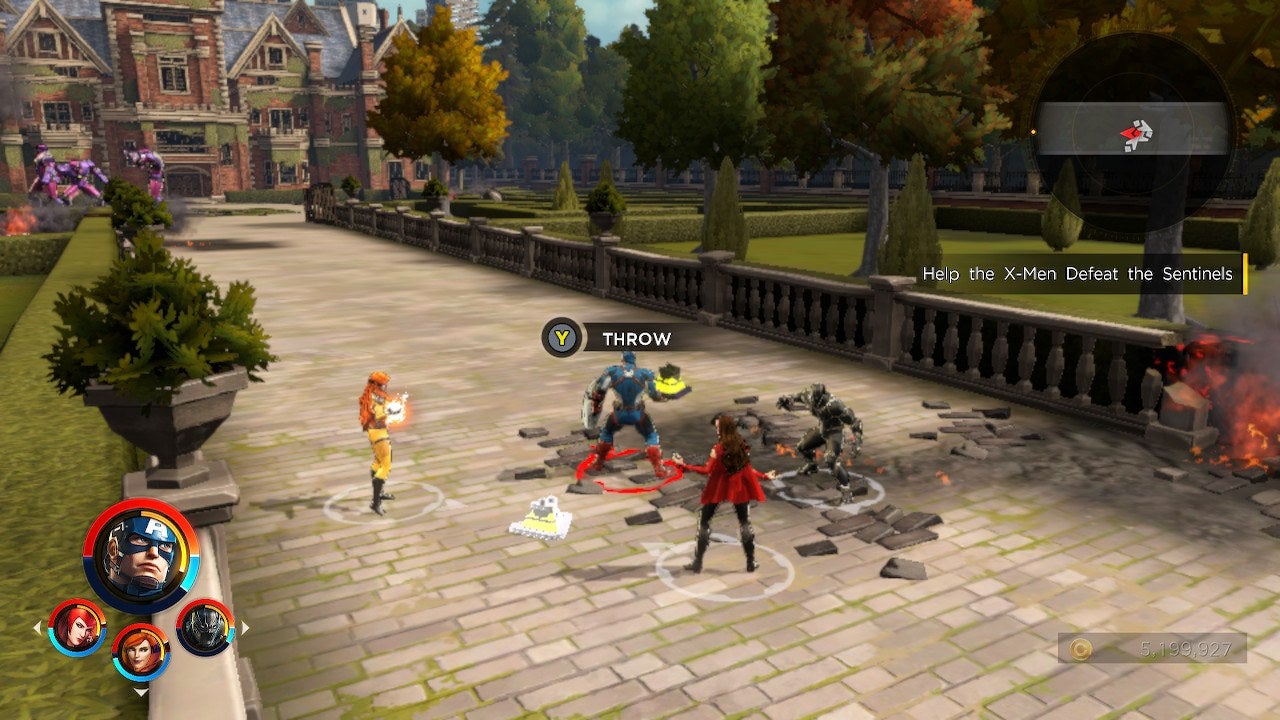 For example, during the battle with sentinels at the X-Mansion, the mutant-hunting robots drop mechanical cores when destroyed. These little explosive goodies deplete a sentinel’s stun meter significantly, opening them up to serious damage more quickly than normal attacks. When a boss sentinel shows up, tossing the cores is an integral part of taking it down.

And if throwing the dropped thing doesn’t work, give it a sec. Sometimes items need to be charged by a boss’ attack in order to be weaponised. Which leads me to my penultimate tip.

While many mini-bosses in Marvel Ultimate Alliance 3 can be blitzed, going down in a relentless flurry of attacks, every major boss I encountered required more than just an all-out assault. They’ll fire attacks that must be avoided. They’ll spawn lesser enemies that have to be taken out first because they drop important items when killed. They’ll set up massive, screen-clearing onslaughts that can only be avoided when characters are in just the right place. 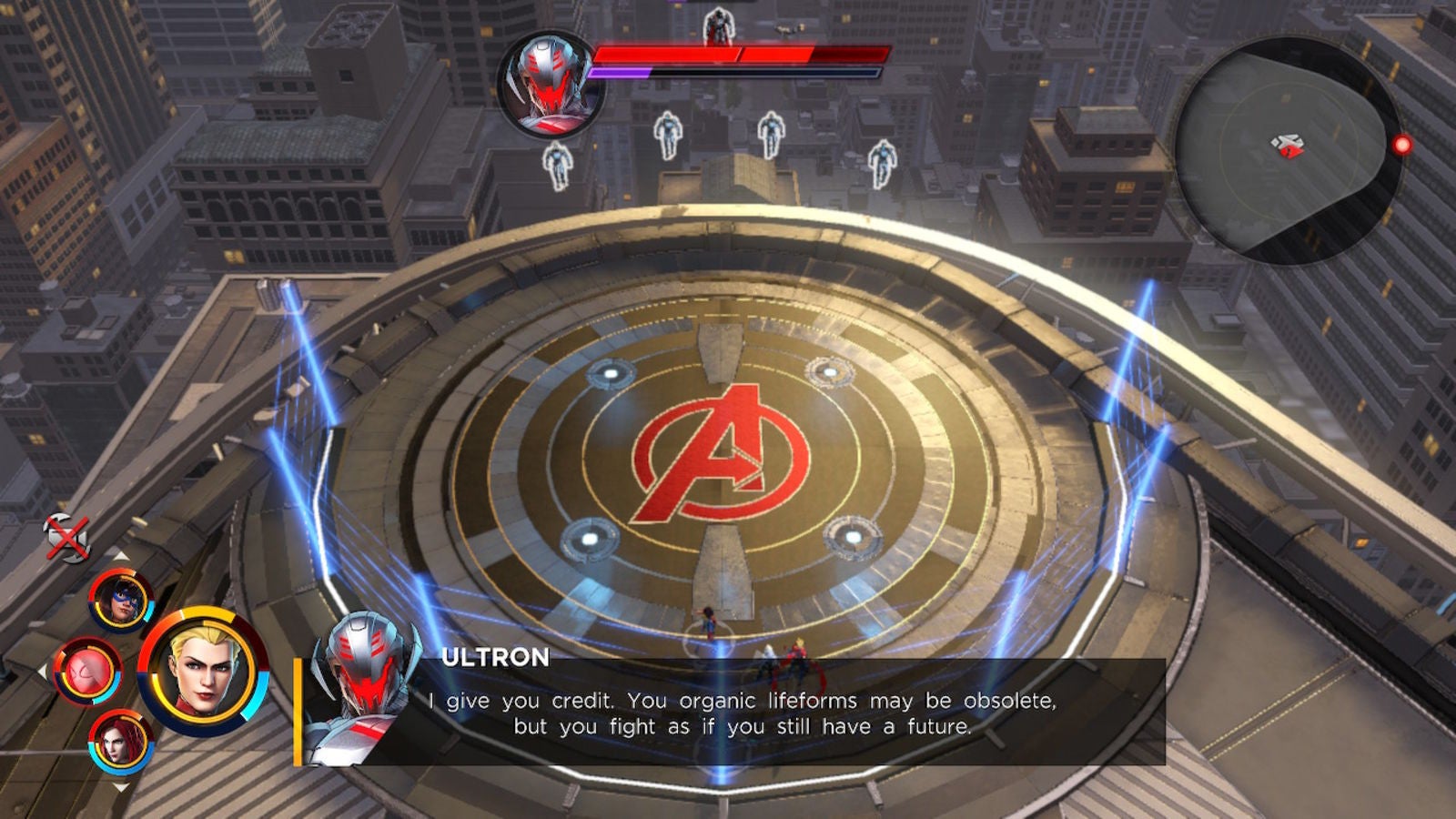 In mid-battle, Ultron flies to the edges of the screen and commands drones to sweep the battlefield with beams that do a ridiculous amount of damage to characters caught in them. Later, he summons a group of drones onto the field that will explode unless avoided or quickly destroyed. I wiped on his metal arse three times before I got the patterns and timing down. Frustrating, but it made victory so sweet.

If a boss gives you trouble, don’t agonize, analyse.

Marvel Ultimate Alliance 3 is an entertaining game with colourful comic book characters doing important comic book stuff. If it’s giving you trouble, don’t be afraid to dial down the difficulty. If you hate Scarlet Witch, despite her being one of the game’s heaviest hitters, don’t use Scarlet Witch. Play the way you want to play, and ignore everything I just wrote. What’s important is having a good time.

That, and harassing* Marvel Games and Nintendo until we get Squirrel Girl.