This week, Image will release Die #6, the first issue of a new arc in Kieron Gillen and Stephanie Hans’ subversive fantasy adventure that has been on hiatus since April. So right now is the perfect time if, like me, you had missed out on the series so far — because if you’re also like me and are immediately enchanted with it, you only have to wait a day for your next fix.

A few weekends ago while visiting family in London, I picked up Fantasy Heartbreaker, the first volume of Die, which is about a group of kids who play a sinister tabletop roleplaying game in 1991 that somehow manages to teleport them to an actual fantastical realm, traumatising them in the process. Weirdly enough, the recommendation came from my brother, who does not particularly read comics, but devours tabletop gaming and fantasy as if life depended on it — and, despite several years of my (characteristically excellent) suggestions, had chosen to read this one instead.

It was that oddity that broke the deluge of desire I’d managed to let get away from me for months and months since Die launched to, and continued to receive critical acclaim among my peers late last year. Sometimes, the bitter irony of writing about comics for a living is that you just don’t have time to read comics, especially the ones you keep hearing about and putting on your mental pull list. Maybe now was the time to finally bite the bullet.

On the train back home, Fantasy Heartbreaker sat in my satchel and was going to sit there the full journey. I was going to play some Fire Emblem: Three Houses, but a low Switch battery and the annoying discovery that my seat’s power outlet did not have the power to charge it waylaid my plan to recruit and/or murder some anime child soldiers.

I could’ve just read Twitter like a boring person instead, but the likewise incapable on-board wifi scuppered that plan, too. And so, there was Die. “Beats staring out a window for a few hours,” I muttered to myself, pulling the trade paperback out of my bag.

Two hours later, as my train pulled in to its last stop, I almost didn’t notice the call to ensure I had all my belongings before exiting the carriage. I was too busy reading Die. Actually, that’s a lie: I was too busy re-reading Die. I had devoured all five issues twice, read the essays from Gillen and Han included in the collection similarly. I was in the process of doing so a third time. I was hooked.

Die makes for a heady combination of fascinating world-building, compellingly broken characters tearing each other apart (sometimes emotionally, sometimes literally), and vivid, striking artwork. You are immediately drawn into the mysteries of a new realm, a hodgepodge of specifically generic fantasy archetypes and an edgelord teenager’s idea of over the top grimness that reads as both a lampooning critique of high fantasy (and very predictable edgy teens) and something compellingly sinister.

You’re also drawn to the traumas Die’s cast faced — not just in the two years they suffer off-panel being trapped in another world, but in the 25 more they endure after its first issue flashes forward to modern-day. They all try to find a way to cope with a sense of normality in the wake of existential trauma. How they’ve grown and changed, shaped not just by their time in a literal dark fantasy but also simply by living life — growing up, having kids, getting jobs, dealing with their emotional problems — beyond it, friends who drifted apart now forced together again by a cryptic signal to return to the nightmare that robbed them of their childhoods. 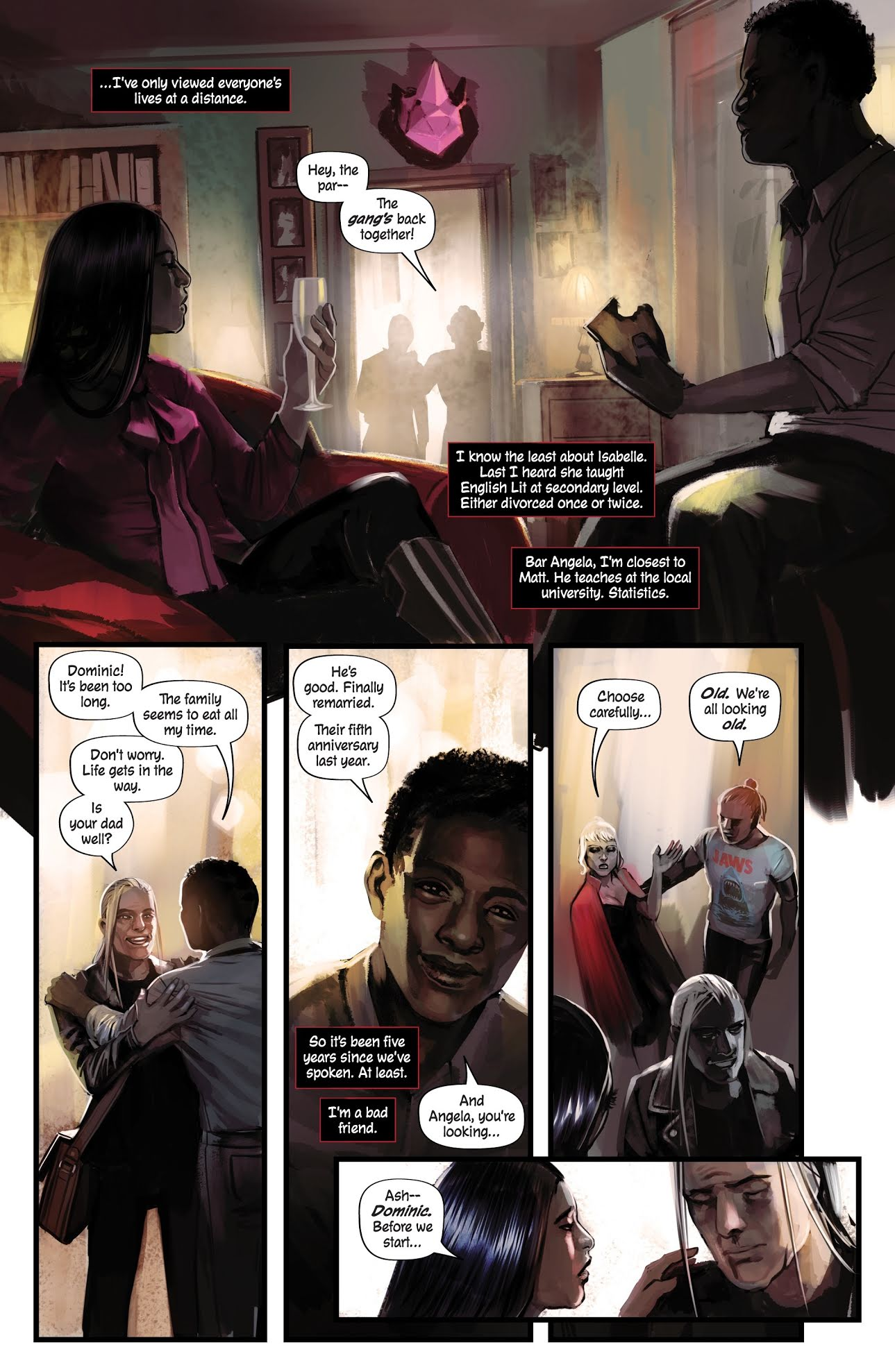 Grim circumstances bring Dom and his old circle of friends together again, two and a half decades after they endured a nightmare. (Image: Stephanie Hans and Clayton Cowles, Image Comics)

It’s a series about the need for, and perils of, escaping from the real world, and also a book about why people are enchanted by roleplaying. There is a fascination with tabletop gaming that runs throughout Die that both provides a logical coherence to the series’ world while also critically examining the very mechanical heart of roleplaying in all its forms. It’s kind of like that animated Dungeons & Dragons show from the ‘80s, except the inverse: Kids who find themselves stuck in a land of sword and sorcery get immeasurably fucked up by the experience instead of having a great time.

That subversion forms a fascinating frame around Die’s blackened, character-driven heart with its other enthralling concept, because as well as being a book about growing up and escapism, thematically speaking, Die is really about RPGs, upending its most common tropes while also a symbolic celebration of the meaning derived from the mechanical structure of how we play them.

In the story of Die, the mystical RPG is a self-made creation of Solomon, the sixth friend in the group of teens who is accidentally left behind in the fantasy realm they’re sucked into after first playing. Solomon doles out classes and their accompanying die to his unwitting friends. (Image: Stephanie Hans and Clayton Cowles, Image Comics)

Solomon, like his friends, is that kind of almost-snobby, going-through-a-phase sort of kid: he scoffs at the mainstream, finds depth in darkness, and is fascinated with subverting expectation. And so, mechanically, each of the character classes the kids select before beginning — and embody when sucked into the fantastical setting of Solomon’s game — become grim takes on traditional RPG classes, the sort of roles born out of staring at a list of spells and feats in a Player’s Handbook and thinking for just a little too long about how they’d realistically work outside of game logic.

There’s Lady Ash the Dictator, played by Dominic, bard-adjacent master of words whose voice can compel you to do anything, a sinister take on dialogue checks and charisma-driven abilities that reads a little like Marvel’s Purple Man, with all the issues of consent and control that implies. There’s Isabelle’s Godbinder, a sort of hybrid between a warlock and a cleric, who demands favours of gods to serve them, instead of the other way around. The Emotion Knight — there are ones for different emotions, but Die is primarily concerned with the Grief Knight, as you’d expect any moody teen going through some shit to be drawn to — played by the angst-ridden Matt is a Paladin where alignment is not derived from morality, but the emotion they must tap into to wield their powers. 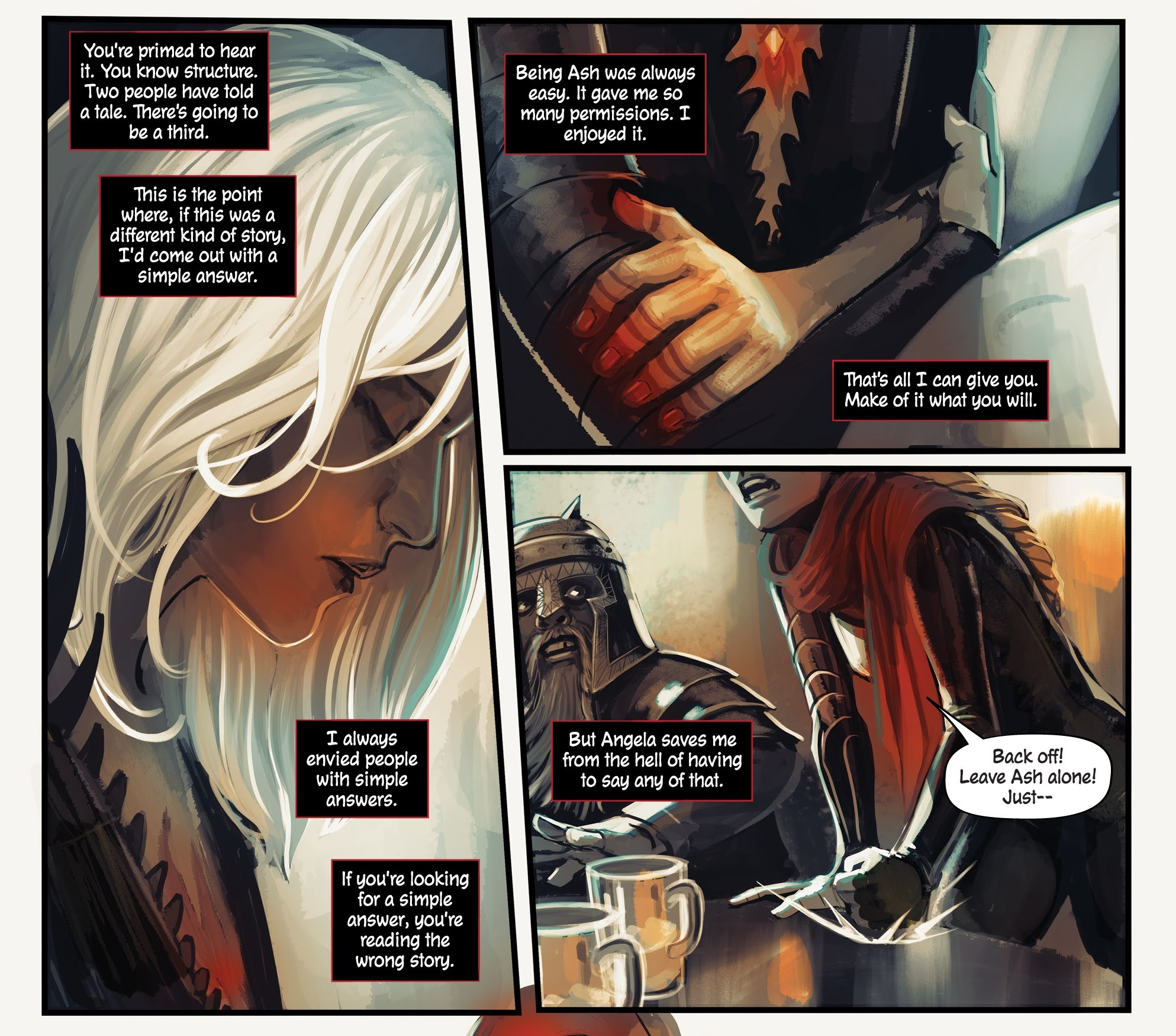 These ideas don’t just offer critical insight into the characters that inhabit them. They are so fleshed out as actual game mechanics — providing a storytelling ruleset that Die rests not just world-building coherence, but moments of high drama on — that Gillen released beta rules for an actual Die RPG alongside the launch of the series’ first trade. He’s even has admitted in interviews that he’s not quite sure if Die is a comic with an RPG attached, or an RPG that just happens to have a comic. But while Die finds intellectual stimulation in its traumatised characters and structural symbolism, it stands out thanks to the stunning art of Stephanie Hans, in what is actually her first ongoing series. With a style that wouldn’t look out of place in the pages of a D&D sourcebook or a Magic: The Gathering card with a striking yet subdued colour pallet, dominated by the sharp, occasionally overwhelming splash of red, Hans is equally comfortable at depicting a grimy teen’s bedroom circa 1991 as she is a steampunk battlefield inspired by the bloodshed of World War One, or a towering, magical city of ancient spires and magical, icosahedron-shaped barrier. Her art marries the darkness of Die’s fantasy and its reality in a similar, painterly tone.

It’s an idea that carries over to the series’ modernist design work by Rian Hughes, another intersection where the series smashes together modernist realism with fantastical surreality to a disconcerting, yet appealing effect.

That clash between the real and the fantastical ultimately defines what makes Die such an enthralling read. It’s a series that is both fascinated by an adherence to rules and yet also by pushing them to a breaking point. It’s about the darkness behind even the lightest fantasy, about what makes the genre so compelling and yet also an examination of the real-world horrors it can be used to symbolise.

It’s about a world where the stresses our protagonists face in life — jobs, relationships and kids, the injustice of their lot in life — are just as potent and threatening to their wellbeing as being chased by a steampunk mechanical dragon from a realm called Eternal Prussia. It’s about roleplaying as an art form, about why we fall in love with it as as a tool of escapism but also the danger of leaning on that escapism to avoid regular hardships. 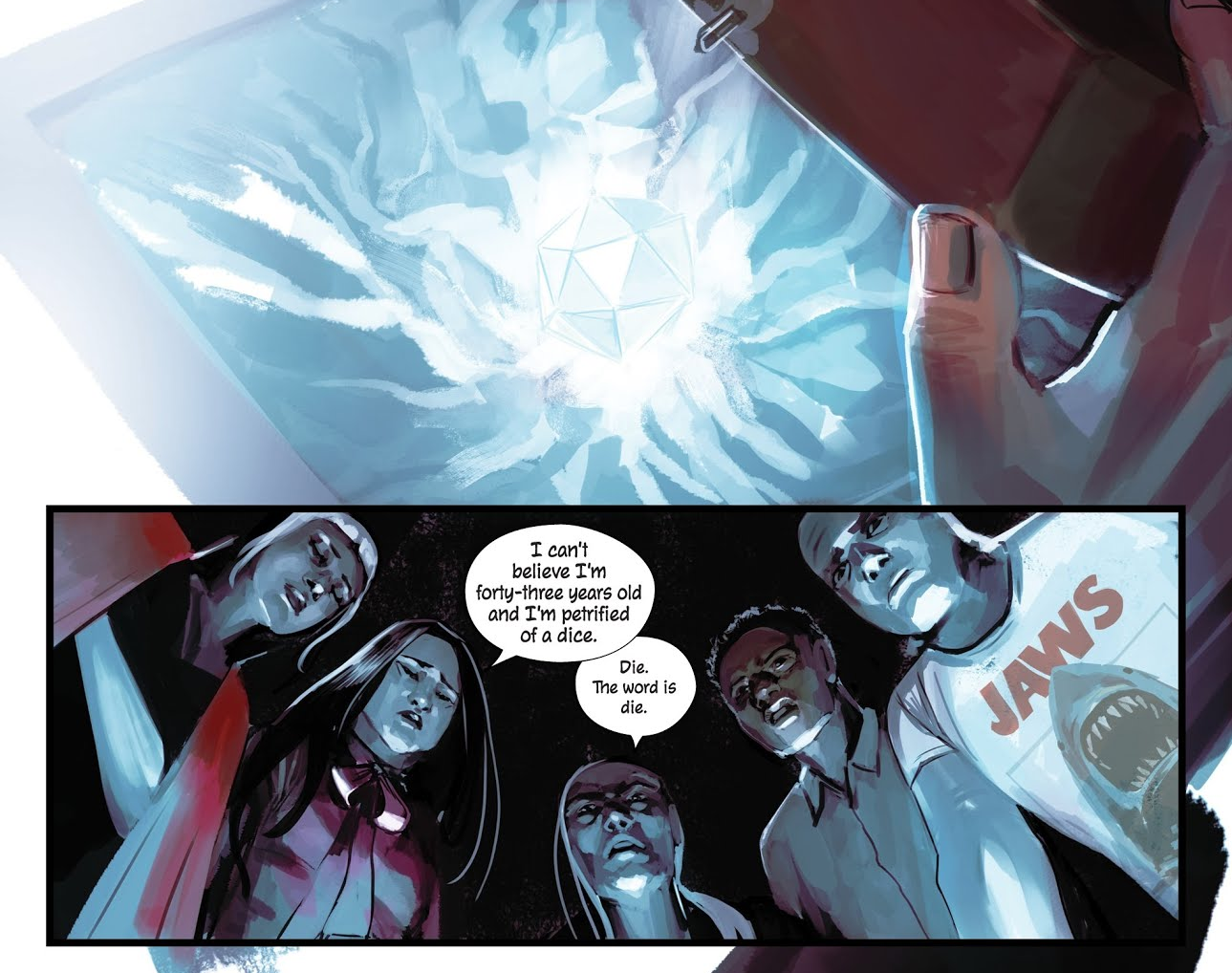 Anyone who’s had even a passing experience with tabletop roleplaying has heard this exact correction. (Image: Stephanie Hans and Clayton Cowles, Image Comics)

It is, as the title implies, also occasionally about dice, and their power. Or rather, about die, and also the kind of RPG player who will absolutely, 100 per cent always correct you when you slip up on that particular singular noun.

So don’t be like me, and nearly let what Die has to offer pass you by. Don’t even be like the much smarter, wiser people than me, who picked up the first trade paperback when it launched, and proceeded have to wait several excruciating months to see this subversive, gorgeous, grim, and utterly fascinating tale continue.

Don’t even be like the even smarter, even wiser people than them, who actually followed along as Die released month by month, because god knows what hell they’ve been going through waiting for Die #6 to hit this week.

Join in now, and then be in on the agonising madness that is waiting for the rest of this story to unfold together. There’s something to be said in having company in your misery, after all. At least, as with Die itself, it’s a good kind of misery.